Gooney Bird on the Map 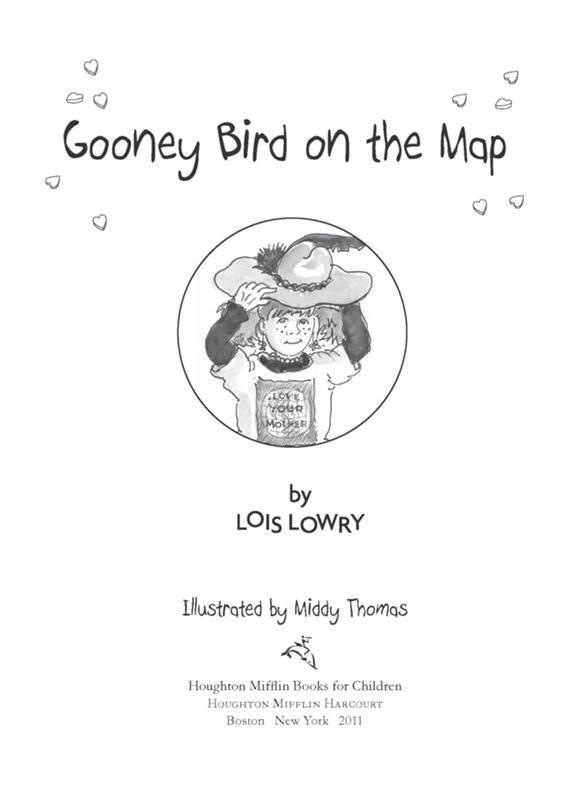 Read more about Gooney Bird in these books by Lois Lowry:

To Hannah, Rorry, and Jax

The text of this book is set in Garamond MT.

"February vacation soon, students! Just ten more days!" Mr. Leroy, the school principal, pointed out, after he had made his usual announcements on the intercom. "I hope all of you have wonderful plans!"

The second-graders wiggled in their seats and began to murmur.
Vacation, vacation, vacation.
Even though they loved school, vacations were always exciting. "I'm going toâ" Ben began.

But Mrs. Pidgeon put her finger to her mouth and reminded them that the announcements weren't finished. "Shhh," she said.

"And we mustn't forget," Mr. Leroy continued, "that this month we are celebrating the birthdays of two of our most important presidents. Let's finish up this morning's announcements by singing to them, shall we?"

Mr. Leroy started off. "Happy birthday to you." So she sang. In every classroom in the Water tower Elementary School, the students joined in. Some of them sang, "Dear Abe," some sang, "Dear George," and some tried to fit in "Dear Abraham-and-George."

Gooney Bird Greene, at her desk in Mrs. Pidgeon's classroom, sang loudly, "Dear George-Abraham-William-Henry-and-Ronald." She was still singing the list of names after the others had finished the last "Happy birthday to you." So she sang her own final line all by herself. The other children all stared at her.

But Gooney Bird didn't mind. "I am never ever embarrassed," she had once said. And that seemed to be true. Now, after she concluded, "Happy birthday to you," she folded her hands on her desk, looked up toward the front of the room, and cheerfully waited for the school day to begin. 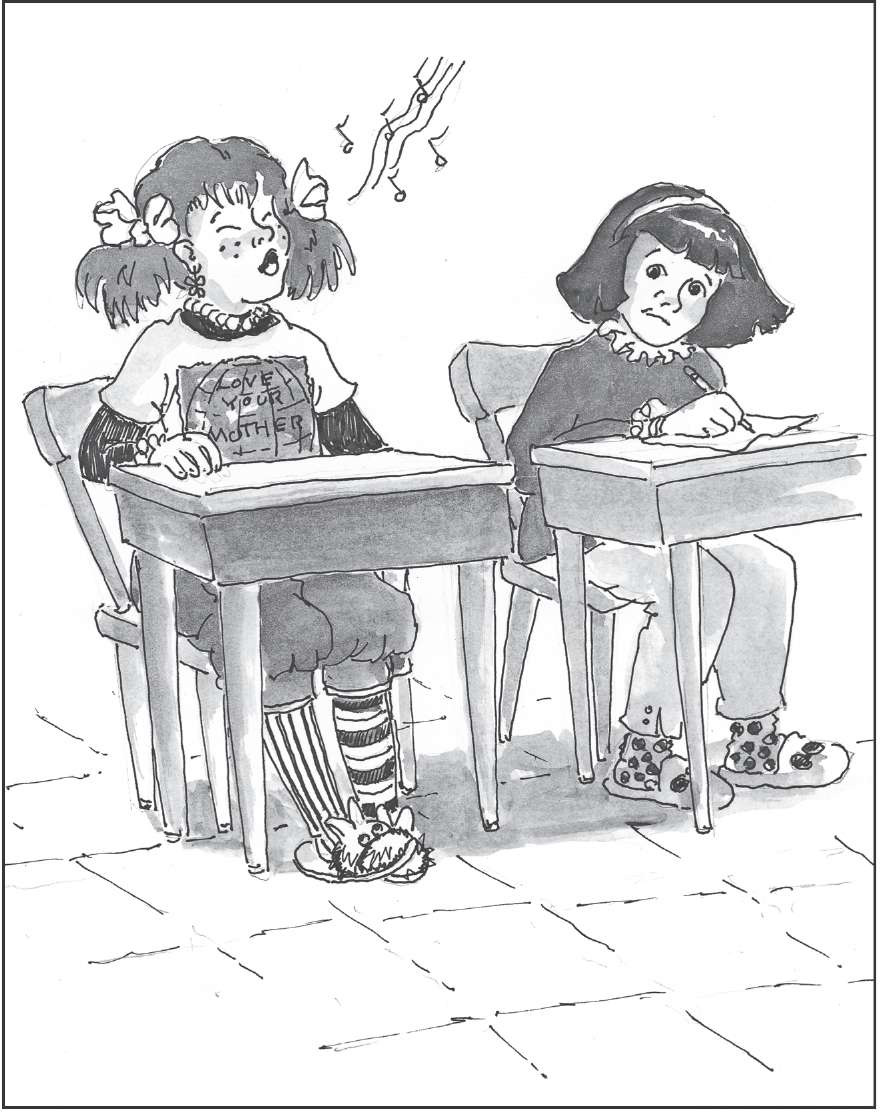 "Goodness," Mrs. Pidgeon said. "Who were all of those people, Gooney Bird?"

"Presidents with February birthdays," Gooney Bird explained. "I don't think it's fair that George Washington and Abraham Lincoln get all the attention."

"But they were important guys!" Barry Tuckerman pointed out.

"I don't even know who those other ones are," Chelsea said.

"Well, let's find out," Mrs. Pidgeon said. She began writing on the board. "George. Abraham. And who were the others, Gooney Bird?"

Mrs. Pidgeon wrote those names on the board. "All right, class. Who was George?"

"Washington!" the children called, and Mrs. Pidgeon wrote "Washington" on the board after "George."

"Abraham?" she asked, and the children all said, "Lincoln!" So she wrote that.

"William?" she asked, but the room was silent. "Well, it could be Bill Clinton, I suppose," she said. "But President Taft was also named William, andâoh, dear. There might be
lots
of Williams..."

She left "Henry" blank. "Ronald?" Mrs. Pidgeon said. "Oh, I know that one, for sure!" She wrote "Reagan" after "Ronald." "I remember when he was president. It wasn't that long ago. But William and Henry? Help me out here, Gooney Bird."

"I kind of like when people have two first names, don't you?" asked Gooney Bird. "It makes them somewhat special, don't you think?"

Felicia Ann, at her desk, nodded her head. The other children frowned a bit.

"William Henry Harrison was born in February," Gooney Bird went on. "He was president of the United States, but only for one month."

"How come? Everybody gets to be president for four years! We learned that!" Malcolm was partway out of his desk. "Four years! Right, Mrs. Pidgeon? Didn't we learn that? Four years?"

"He died. Moment of silence, please."

"Moment of silence?" Mrs. Pidgeon repeated with a questioning look.

"When you hear something sad and serious," Gooney Bird explained, "you should always have a moment of silence. You don't have to close your eyes or anything."

"Well, I like the idea of an occasional moment of silence," Mrs. Pidgeon said. "Let's do it. A moment of silence for William Henry Harrison, class, because he died after being president for only one month."

"Bummer!" said Tyrone. He began one of his raps."
First he be elected, then he be rejected...
"

"Moment of silence, Tyrone," Gooney Bird reminded him. "Anyway, he wasn't rejected," she pointed out. "He got sick and died."

The class was all silent for a few seconds.

"And nobody remembers him," Keiko added, sadly.

"I remember
everything,
"Gooney Bird said.

"Well," Mrs. Pidgeon said, after the moment of silence had ended and she had looked around the room with a sigh, "another day in the second grade. I wish we had cleaned this mess up better yesterday before school ended."

The children all agreed. They had been working on valentines to take home to their parents. Now the valentines were done, but there was red construction paper everywhere, as well as scissors and paste, Magic Markers, and white paper that they had folded and cut into snowflakes. Tiny white scraps were all over the floor.

"Mr. Furillo will clean it up," Nicholas said. "That's his job."

"Nope," the teacher said. "It's our job. Let's do it quickly. We have to get to work on our geography lesson."

"Mrs. Pidgeon?" Gooney Bird raised her hand. "I have an idea! We could do both at once!"

"Sounds good." Mrs. Pidgeon had begun to walk around the room, collecting unused sheets of construction paper. She held a stack of red papers in her hand. When she got to Gooney Bird's desk she looked down in surprise. "My goodness!" she said. "A
blue
valentine?"

Gooney Bird nodded. She looked proudly at the large blue paper heart that she had decorated with a yellow arrow, and the words
I LOVE YOU
carefully lettered in brown. "Yes," she said. "I like to be different."

Mrs. Pidgeon looked at Gooney Bird, who today was wearing unmatched socks, knickers, and a pearl necklace over her
LOVE YOUR MOTHER
T-shirt. "I know you do," she said fondly. "Finished with your paste?"

Gooney Bird nodded, and Mrs. Pidgeon picked up the square of paper with a white dab of dried paste on it. "Here's what we'll do," she announced to the class. "Put your valentines away neatly in your desks so they don't get crumpled. I'll come around with the wastebasket, and each of you deposit all of your used paste and your paper scraps."

"Like on an airplane!" Barry announced. "When the flight attendant comes around with a plastic trash bag!"

"Yes, a little like that," Mrs. Pidgeon said. She went to the front of the room and picked up the large wastebasket.

"I'm going on an airplane for vacation! I'm going all the way toâ"

"Enough, Barry! We've all heard about your plans."

Hastily Mrs. Pidgeon set the wastebasket down, went to the piano, and played a chord to quiet the class. Then she played the opening line to a familiar song, a song that the children had sung many times.

"'This Land Is Your Land'!" Chelsea called.

"Right," Mrs. Pidgeon said. She stood up and started around with the wastebasket. "This land is our land, and we're going to work again today on the state capitals."

Tyrone nodded. All of the children looked toward Tyrone's cubby. They could see the handle of his lunch box poking out below his hat and mittens. Tyrone's lunch box listed all the states, their capitals, and the names of famous people who had been born there.

"All right, here we go! You all should be cleaning up your valentine scraps! First state: Massachusetts!"

"Correct." Mrs. Pidgeon stopped at Malcolm's desk and helped him put his valentines neatly away. He had made three red decorated hearts for the triplet babies at home. As always, his desk was a mess, but with Mrs. Pidgeon's help he tidied things up. He leaned down and picked up some scraps from the floor and dropped them in the basket.

"That was easy!" Chelsea pointed out. "Give us a hard one!"

"Okay," said Mrs. Pidgeon. She held the wastebasket, and Keiko carefully swept her scraps into it from her desktop with the side of her hand. "Michigan!"

No one said anything. Finally, Felicia Ann remembered Michigan's capital. "Lansing!" she called, and everyone cheered.

"How come you didn't get it, Gooney Bird? I thought you remember
everything!
" Tyrone asked.

"I was thinking about something else," Gooney Bird explained. "My mind was else where. I'm beginning to get a really good idea. But it's only in teeny pieces so far. I have to put it together in my mind."

"Speaking of cool, how about this one? Vermont!" Mrs. Pidgeon announced.

After a moment, the children responded, "Montpelier!"

"Hey, did I tell you? I'm going to Sugarbush, Vermont, for vacation!" Ben called. "And I'm taking snowboard lessons! And we're staying in a hotel andâ"

"You told us a thousand times," Malcolm muttered.

"Yes, Tallahassee!" the other children agreed.

Beanie giggled. "I knew that! I just wanted to say Orlando because that's where my family's going on vacation! Disney World! We're flying to Orlando, and our hotel has a swimming pool, and I have a new bathing suit, andâ"

The class fell silent in sympathy for President Harrison, and Mrs. Pidgeon returned the wastebasket to its spot near the door.

"My lunch is somewhat dull today," commented Gooney Bird as she unwrapped a sandwich later that morning. "I wish I had a kumquat."

"Your lunch is never dull," Mrs. Pidgeon said, looking over from her desk. "What's in that sandwich?"

A Rose for the Crown by Anne Easter Smith
Top Down by Jim Lehrer
Perfect Mate by Jennifer Ashley
On the Brink (Vol. 1) (The On the Brink Series) by Rhys, Erika
The Beast's Bride by Myles, Jill
Entwined With the Dark by Nicola Claire
Reapers Are the Angels by Alden Bell
Under the Rose by Julia O'Faolain
Milosz by Cordelia Strube
Puberty Blues by Gabrielle Carey