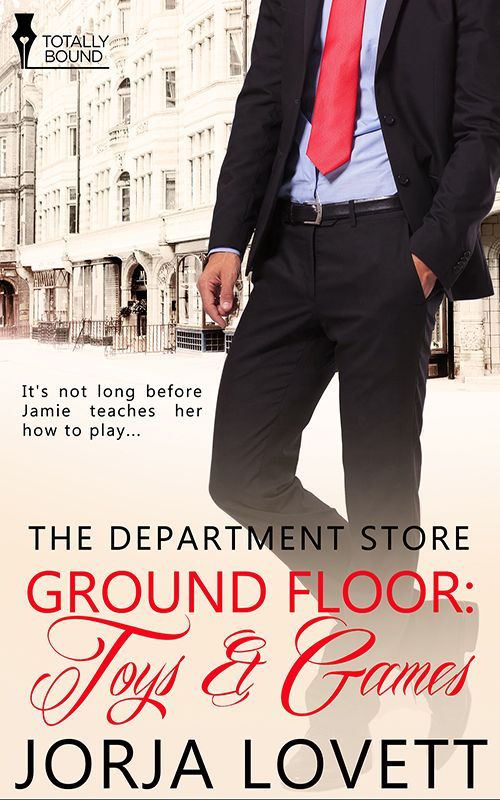 This book contains sexually explicit content which is only suitable for mature readers. This story has a
heat rating
of
Totally Burning
and a
Sexometer
of
3.

This story contains 67 pages, additionally there is also a
free excerpt
at the end of the book containing 9 pages.

Book one in The Department Store Series

Jen is the new girl in the toy store, but it’s not long before the boss’ son Jamie teaches her how to play.

Recently bereaved, Jen White hopes her new job in the toy shop at Kelsey’s Department Store is a fresh start. One ripped pair of stockings later, she catches the eye of the boss’ son, Jamie. She’s not looking to replace her partner, but he soon makes her realize she doesn’t want to spend the rest of her life celibate. And die a virgin.

Jamie Kelsey’s a screw up. Well his father still thinks so, even after he’s tried to make amends for losing the family’s fortune. The store’s in trouble, but with his father still stuck in the dark ages and refusing his help, he’s worried it’s too late. With a little help from their newest employee, he starts to make his mark on the store. He’s sworn off women to concentrate on his career but when Jen comes to him looking to further her sexual education, it’s an offer he can’t refuse.

For Catherine, who gave me a chance when no one else would, and made work fun!

Wishing you all the best for your new life xx

“God, if you want me to lose this job before I’ve even started, you’re going the right way about it!” Jen tilted her head up toward the gray sky and let the rain wash over her. With mud splattered legs, and an inside-out umbrella in her hand, she was the picture of Northern Ireland in the springtime.

The lights turned red to give her a break in the traffic and she sprinted across Royal Avenue as fast as her black court shoes would carry her. After the ongoing roadworks in the city had delayed her bus, she didn’t have a second to spare.

Kelsey’s Department Store perched on the corner of the Belfast street like a stubborn old man turning his nose up at the youth of today. Where the new buildings around it were open and inviting, Kelsey’s stern Victorian exterior immediately set Jen’s nerves aflutter.

Stone faces stared down at her disapprovingly. Little wonder. Her once pristine white blouse and black pencil skirt were wet through. Hardly the professional image the store required from their staff at all times.

She dumped her useless umbrella in the nearest bin and ducked around the corner of the building to make some essential repairs to her appearance. The faded maroon veranda above a long forgotten floral window display gave her some shelter, and she used the glass as a mirror to finger comb her hair into some order. Unfortunately the brown locks she’d carefully straightened before she had left the house, now curled at the ends making her look like a Springer Spaniel. That meant a stop for hair accessories as well as a visit to the hosiery department.

With a glance at her sullied stockings she decided it was better to walk in barelegged than dirty. At this time of the morning thankfully the alleyway at the side of the store was empty. Jen stepped out of her shoes and hoisted her skirt up her thighs so she could shimmy out of her nylons. Quick change complete, she slipped back into her heels and popped her wet things into her handbag. One long, deep breath steeled her to make the final journey into the store.

The black and white tiled floor at the entrance glistened with wet footprints. Jen stepped gingerly across it. The way her morning was going she wouldn’t be surprised if she made her grand entrance sliding through the great halls on her backside.

“Where the hell have you been? You’re late!” Kelly scurried up to meet her and took her by the arm.

“Well, Mr Kelsey will be doing his rounds soon and it won’t look good for either of us if we’re not at our posts.” Kelly didn’t usually play the big sister, but the scolding was well deserved.

“I know I only got the job because of you, sis. I won’t let you down. I promise.” Someone with no recent work experience didn’t exactly have a lot of options to choose from.

Kelly’s face softened. “As department supervisor I have a little sway, but Kelsey was only too willing to help my young, widowed sister.”

Immediately, tears threatened to fall. Even ten months on Jen couldn’t think of Lee without crying.

Kelly put her arm around her and gave her a squeeze. “Hey, now. No tears. You’re wet enough this morning. This is your fresh start, so dry your eyes and help me meet today’s sales targets.”

Jen did as she was bid and dabbed away her pain with the sleeve of her blouse. She’d spent too long curled in a ball shutting out the world. Today was her first step into her new life. The one without Lee.

Kelly resumed her efficient employee role and led Jen through the department store. It was like walking back into the past. Glass cases lined their path, manned by staff clones, all dressed in black and white and wearing the same serious expression. The cluttered floor and dark, dusty atmosphere was claustrophobic, and made her think of one of those period dramas her mother watched on TV—those depressing tragic love stories where the poor heroine falls for the rich playboy and ends up dying in childbirth.

At least the toy department, the section she was to work in, seemed to have a bit more life about it. Perhaps it was the selection of modern stock, or simply the plastic smiling dolls’ faces staring back at her, but it looked a happier place to be. She needed that boost at the minute.

“The cash register is fairly straightforward. It’s all computerized now thanks to young Mr Kelsey, so you just have to scan the barcodes on the stock. I’ll show you how to use the credit card machine when the next customer comes in. In the meantime, could you just tidy the shelves a little and straighten the games and jigsaws for me?” Kelly took her spot at the counter and began counting the float in the till.

Jen took a wander around the aisles getting to know where everything was kept. It wasn’t a huge area so hopefully she would learn quickly and lose the first day at big school feeling.

She knelt down to pick up a stray tennis ball which had rolled under the bottom shelf.

“I thought you might need these.” The deep voice over her shoulder almost sent her sprawling on the floor.

“Pardon?” She looked up into a pair of mischievous green eyes.

The handsome owner of the sparkly peepers extended a hand toward her, holding a small package.

“What’s this?” Jen wondered if he’d mistaken her for someone else, and took a cursory glance at what he was offering—a pair of nude silk stockings.

“I saw you had a mishap with yours this morning.” A smirk spread across his face.

“I did. How did you…?” As the implications of his words sank in, Jen’s cheeks burned. She had been certain no one had witnessed her moment of indiscretion.

“Take them.” He waved them under her nose again. She would’ve refused except her legs were so pale they were almost transparent and she needed something to cover them up.

“Thanks.” She accepted the stockings but it didn’t make up for the free peep show she’d inadvertently invited him to. “But you really shouldn’t be hanging around corners spying on women. You could get arrested for that you know.”

The smirk stretched to a gorgeous beaming smile. “And maybe you shouldn’t be flashing everything you’ve got in front of a window if you don’t want people to look. Glass is see through you know.”

Jen groaned at her own foolishness, wishing this day from hell would end already. “Well, you’ve had your laugh at my expense. Thank you for the stockings, but I have work to do.”

He held his hands out wide in a gesture of surrender. “Hey, I can promise you I wasn’t laughing. And I certainly didn’t mean to make you feel uncomfortable. The opposite actually, I was trying to save your blushes, but I see that’s backfired.”

She got to her feet but it didn’t put her at any more of an advantage as he still towered over her, dressed impeccably to boot. The expensive charcoal gray suit said ‘management’ which could only heap more embarrassment on her if he was more than a well-to-do customer. “I apologize if I sound rude but it’s my first day. And so far, it’s not going well.”

“I’m sorry to hear that. I’ll leave you to get dressed in private this time, and good luck with the job.” Mr Suave swept away, leaving her gift and the smell of his spicy cologne behind.

It took a moment for Jen to come back down to earth, with a little help from her big sis.

“What did he say to you?” Kelly bustled over eager for gossip.

“He gave me these.” Jen held out the stockings reverently like someone had left her in charge of the Crown Jewels.

“Oh my goodness! That could be a strike against you for not wearing the appropriate uniform.” Kelly held her hand to her mouth in horror.

“What business is it of his anyway?” It might be a while since she last interacted with the general public, but Jen didn’t think her bare legs warranted anyone taking that level of offense to report her.

The look of derision from her sibling told her she’d made yet another monumental cock-up. “That’s Jamie Kelsey, the boss’ son, you’re rubbing up the wrong way. Let me tell you girl, if you’ve caught his eye then you’re in serious trouble. That man treats the female staff like his own personal pick ’n mix.”

A tremble rippled through Jen’s limbs. If that was the case, she hoped she was the sour cherry that wasn’t quite to his taste.

Jamie finished his tour of the departments, although he paid little attention to details, distracted on two counts. The first being that even after opening, the store housed more staff than customers, and the second was their new employee. His intention to modernize the window displays had been made more eventful by her saucy strip, even if it did mean the store remained stuck in the dark ages for now. It was only coincidence his first stop was in the hosiery department afterwards. What harm was there in it when he didn’t even know the girl’s name? He probably shouldn’t learn it.