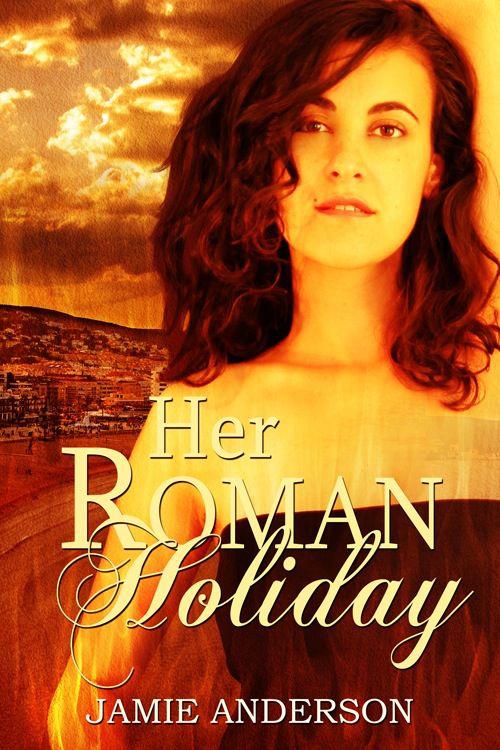 To my beloved, TCN.

Calia first noticed him on the platform in Milan, as she waited for her train to arrive.

His brooding sexuality drew her interested gaze as he paced back and forth, frowning absently at the tracks, his mobile phone against one ear.

‘Italian Stallion’ didn’t even begin to do him justice, though he had about him the fierce, honed elegance of a purebred, his movements marked by a graceful economy of motion.

Occasionally, he’d pause in his restless prowl to let loose a barrage of fluid Italian.

Interesting, how he could be so disturbingly attractive, despite his impatient grimaces and the obvious irritation that underlay his abrupt gestures.

Calia couldn’t resist the urge to watch him
—
and she soon decided she wasn’t going to bother trying.

After all, he seemed oblivious to his surroundings.

A scruffy backpacker was unlikely to attract the attention of someone like him, so why not enjoy the view?

His dynamic good looks demanded it:

His short, dark hair carried just a hint of curl.

She hadn’t yet glimpsed his eyes, but she imagined them dark enough to drown in.

A grin curled her lips and she was about to look away when he turned abruptly.

Their gazes collided, and she found herself looking into the burningly intent glare of a wolf.

Her smile faded as she felt herself being assessed with insolent thoroughness.

One of his eyebrows rose, then he said something into his phone and turned away.

Calia swallowed, indignation rising at the disdain in his expression.

Then, she made herself shake it off.

After all, what did it matter what some ill-tempered stranger thought of her appearance
—
regardless of how sinfully sexy the man might be?

She glanced down at herself and chuckled.

No wonder he was bowled over.

Over the years, she had been called ‘beautiful’, but Calia had rarely seen that in herself.

More often, she thought of herself as dwelling on the attractive side of ‘average’, and for the most part that suited her just fine.

Of course, after a long day, followed by an all-night train ride, even Cindy Crawford might be hard pressed to look good
—
which didn’t say much for Calia Ryan’s chances.

She tried tugging at her wrinkled t-shirt, but it didn’t help.

Her clothes were hopelessly rumpled for having been slept
—
or rather, dozed
—
in.

The journey from Paris had involved a 5 am transfer in Nice.

She vaguely remembered scooping up her backpack, daypack and other accoutrements, before stumbling over to the connecting platform.

And now
—
Milan to Florence.

The train pulled in not long after.

She swung her backpack into place and clipped the straps across her chest and waist, before hanging her daypack over the front of her body.

She picked up her water bottle.

Only then did she allow herself one more glance in his direction, but he was gone.

She walked over to one of the railcars and pulled her laden self up the stairs.

The interior had seen better days.

A corridor ran along one side, opening onto a series of compartments with grubby, sliding glass doors.

Calia shuffled along the corridor until she found an empty compartment
—
and after double checking that none of the seats were reserved, she let herself in and loaded her backpack onto an overhead rack.

Then, she rummaged through her daypack until she found her makeup bag.

A glance in the mirror and she had to laugh.

No wonder he had been unimpressed.

Her eyes still looked half asleep and her straight, dark brown hair was a haphazard mess of tangles.

By the time the train pulled out of the station, she had repaired the damage.

She was just contemplating a quick visit to the washroom when a slouching, middle-aged man with greasy hair pushed open the door to her compartment.

He pointed at one of the seats and said something in Italian.

Calia assumed he was asking whether he could sit down.

She nodded and gestured towards the seats.

He closed the door, then settled into the spot opposite her, beside the window.

Her nostrils flared at the sour, acrid smell of dried sweat.

This close, he looked even more disreputable.

After that observation, Calia made a point of keeping her gaze fixed outside the window at the passing scenery.

But she could still feel his stare.

She shifted uncomfortably and resolved to ignore him.

She had almost succeeded, when he spoke, “
Vi occupate di se fumo?
”

Between her tiny smattering of Italian and her fluent French, she guessed he was asking whether she minded if he smoked.

When he removed a pack of cigarettes from one of his pockets, her suspicion was confirmed.

She shrugged and turned back to the window.

But moments later, he touched her hand and shook the pack of cigarettes at her.

He nodded, still smiling as he lit his cigarette.

Then, just as Calia was about to return her gaze out the window, he pointed at her, then at himself, before twitching his hips lewdly.

That set him off.

He launched into a torrent of Italian.

She didn’t understand a word of it
—
until he pulled his wallet out of his inside pocket and started waving some Euros in her face, making the nature of his proposition degradingly obvious.

This time, she spoke more forcefully, reinforcing her refusal with a gesture of negation.

But her refusal only seemed to make him more emphatic.

His expression darkened and he raised his voice, gesticulating wildly.

What had at first seemed innocuous was rapidly escalating out of control, and Calia glanced at the door, wondering if she should grab her backpack or just get out of there.

Before she could act, he stood, looming over her, his expression ugly.

He waved the hand with the cigarette in front of her face and said something more, before walking over to the door.

Calia watched his hand approach the door handle, then pass by it to the curtain that had been pulled back from the windows facing the corridor.

What are you doing?” she demanded, her voice rising in volume.

She stood, walking towards him.

I told you, I’m not interested
—
now get the hell out of here, or I’m calling for help.”

She reached out, intent on pushing past him to get at the door and out of the compartment.

His other hand came out of nowhere, shoving her towards the side where he had been sitting.

Her head knocked against the lower metal baggage rack and she blanked out as she fell onto her side across the row of seats.

She regained awareness to find the man straddling her, his hand over her mouth, the other groping at her chest.

His face was several feet above her own, his rotted teeth clenched around his cigarette.

One of her arms was pinned, but she struggled and shouted as best she could, trying to take a bite out of his hand while she worked to maneuver her free hand into a place where it might do some damage.

The door to the compartment opened, distracting her assailant, and a male voice barked something in Italian.

She took advantage of the distraction to deliver a hard punch to her attacker’s privates.

He groaned, the cigarette dropping from his mouth onto her chest.

She grabbed it before it burned anything and butted it out on the closest available surface
—
his thigh.

He yowled, raising a threatening hand
—
when someone else grabbed his wrist and pulled him off her, all the while spewing a barrage of Italian.

Calia sat up, her heart still pounding, as her rescuer continued speaking.

She drew in deep, steadying breaths and stared at her hands, which were shaking badly.

That didn’t surprise her, since her insides felt all jittery and askew.

Distantly, she noted that her attacker had been expelled from the compartment and the man who had burst in on the scene had settled in the seat beside her.

He smelled of spicy soap, underlaid with a hint of something darker.

Something that might have intrigued her under other circumstances.

But for now, all she felt was an overwhelming relief.

He continued to speak in Italian, his tone no gentler than it had been with the man.

Calia didn’t understand a word of it.

She finally looked at her rescuer
—
and froze a moment.

The Lone Wolf, from the platform.

And if anything, his expression was harder than it had been earlier.

Despite that, her throat was suddenly dry and she felt a mortifying tide of embarrassment heat her cheeks.

She let out a slow, steadying breath.

Thank you for your help.”

But
molto grazie
, for coming in when you did.

For getting rid of that man.”

He shook his head.

“A beautiful woman, traveling alone, and you don’t even speak Italian.”

Calia frowned, bristling at the accusation in his tone.

Of course, his English would be flawless.

Only the slightest of accents betrayed him as a non-native speaker.

“What exactly do you mean by that?”

So just tell me what you think would have happened if I hadn’t come by when I did?”

“I would have managed.

It might have gotten a little messier
—
and I did appreciate your intervention.

But I would have fought him off, even if you hadn’t come.”

And what the hell does that have to do with whether or not I speak Italian?”

“You don’t even know enough of my language to be able to shout for help, do you?

He shook his head, his expression still hostile.

But now Calia was right there with him.

“Are you always this gracious
—
or have I somehow been singled out?”

“What would you have me do?”

Maybe an ‘are you all right?’ or something like that?”

Case of Imagination by Jane Tesh
Smart Mouth Waitress by Moon, Dalya
The Proposition by Lucia Jordan
Only Love Survives (Love and Zombies) by Charles, Renee
Eggplant Alley (9781593731410) by Cataneo, D.
The Midnight Dog of the Repo Man by W. Bruce Cameron
The Undertaker by Brown, William
The Design of Everyday Things by Don Norman
Oughta Be a Movie: a Sugar-&-Spice romantic comedy by Susan Hammond
Unlikely Places by Mills, Charlotte