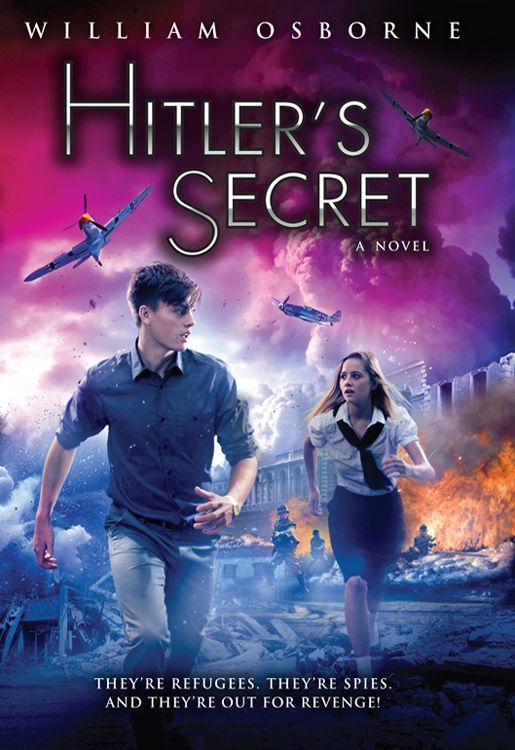 5 THE FISCHERS OF SALZBURG

9 THE ROAD TO PRIEN

31 PICKING UP THE SCENT

41 BACK ON THEIR TRAIL

43 ACROSS THE BORDER — SWITZERLAND

46 DEATH ON THE MOUNTAIN

54 A MOMENT OF TRUTH

The boy’s lungs were burning, and his eyes streaming with tears.

He had to get to England. It was now or never. The smoke was all around him, acrid cordite and sulphurous petrol. He kept on running, every breath a sharp stab in his chest. He had to keep going, had to reach the water’s edge, had to get beyond the upturned burning vehicles and the dead and dying men lying on the beach. He kept his eyes fixed on the hundreds of boats of every shape and size anchored in the water: barges and sailing yachts, naval destroyers and passenger liners. It seemed every boat in Britain had made the journey across the Channel to help its soldiers escape the advancing German Army.

He stumbled over discarded equipment, soldiers’ canvas packs, ammunition boxes and piles of guns. Then the boy
heard the sharp roar of aeroplane engines at close range. He turned. Three Messerschmitt fighters were racing straight towards him, and they were no more than fifty feet above his head.

The water was only about two hundred yards away now. He was so close. The boy tripped and stumbled as the planes flashed overhead. Suddenly he realized he’d lost his money belt. Its zipped compartment contained his whole life, everything he had managed to snatch from home the afternoon he had made his escape: photos of his parents and brother, his identity card and German passport, the last of his money.

He crawled over the sand on his knees, searching for it, machine-gun fire kicking up columns of sand around him. Something glinted a few feet away. He snaked towards it on elbows and knees. It was his father’s gold wristwatch, which had been tucked inside the belt for safekeeping. At least he had found that. The Nazis had taken everything else.

There was a sudden blast of whistles along the foreshore, and the sound of orders bellowed above the explosions and gunfire. The rescue boats were leaving.

He sprinted the last few feet to the water, plunging into the surf. Another wave of German planes circled to the west, lining up for an attack. He spotted a small wooden riverboat with a green hull and white trim. It was only about fifty yards away but it was already completely overloaded with troops. Its
skipper, a duffle-coated man with a pipe clenched between his teeth, was pulling up the anchor.

The boy waded out. Within a few steps he was out of his depth. He was a strong swimmer, and the cold water revived him. He lifted his head to check his position and saw a plume of black exhaust appear from the back of the riverboat as the skipper engaged the propellers.

“Bitte warten Sie!”
the boy shouted at the top of his voice.

But they didn’t understand. They weren’t going to wait for him. The boat was beginning to move forward on the swell, the captain looking to maneuver through the burning wreckage of other sinking boats.

The boy knew if he let go of his father’s watch he could gain a little more speed, but he refused to do it. It was all he had left. Instead he plunged his head into the water and kicked harder. He had to keep going. He had to make it.

And then his arm struck the side of the boat and he pulled his head up. The boat was so overloaded it was only a foot above the water. He grabbed the rope around the side with one hand, fighting for breath, and found himself being dragged along.

A plume of water erupted in front of the boat. A bomb. The skipper spun the wheel. The boy thought his arm would be torn from his shoulder as the boat rode into the swell from the bomb’s impact. His head slammed against the hull.

“Hilfe! Hilf mir!”
he yelled. He felt his grip on the sodden rope weaken, knew he couldn’t hold on much longer. His head sank beneath the waves.

Suddenly, strong hands grabbed him under his armpits and he found himself being hauled up over the side of the boat. He opened his eyes. He was lying on his back on the deck, gasping for breath, retching. A group of British soldiers was staring down at him. They were all bandaged and bloodied. He smelled cigarette smoke. One of them kicked him lightly in the ribs.

The boy nodded and staggered to his feet. “Please, I am also from Herr Hitler escaping.” He had to convince them to take him with them. “Victory for England!” he shouted desperately. Then his eyes rolled up into his head and he pitched forward onto the deck.

A girl with long chestnut hair leaned right out of the passenger window of a black car as it hurtled down Haverstock Hill towards the center of London. In large white letters on the car’s bodywork were the words
Blood Transfusion Service
. The girl was proud to be finally helping with the war effort. She gripped the doorframe with one hand and rang a large brass bell for all it was worth with the other.

“Hold on tight!” yelled her driver, Judy, a plucky young woman from Mill Hill, as the car shot over Regent’s Canal Bridge. A double-decker bus appeared directly in front of them, and they swerved to pass it, meeting a black taxi coming the other way. The bell ringer squeezed her eyes shut as the driver floored the accelerator, and ducked back in before the two cars collided. A traffic policeman was frantically blowing his whistle and waving them through a junction. The girl grinned from ear to ear. She’d just started working on the “Blood Run” with Judy on her Wednesday half-day from school. Judy was great: She was nearly twenty and drove like the wind. The girl had started this job as a way of repaying the Brits for saving her and family, but now she realized it was very exciting, too!

Less than ten minutes later, the car skidded to a halt at the entrance of St. George’s Hospital at Hyde Park Corner. It was a chaotic mass of activity, ambulances arriving with wounded and others departing, their bells jangling. Hospital staff jostled between patients and visitors. Soldiers sat smoking at their guard posts, surrounded by sandbags. Buckingham Palace was just a stone’s throw from the hospital, so the whole place was bristling with anti-aircraft guns.

The girl jumped out and ran to the back of the car to open the trunk. Resting inside was a large wooden ice chest and some crates. The girl swung up the lid of the chest. Inside were thirty large glass bottles filled with dark red fluid, and they
were all still intact. Relieved, the girl deftly selected eight bottles and filled two crates. She sprinted for the entrance.

“Urgent blood! Emergency, urgent blood!” she shouted like a market trader, and the crowd outside parted without complaint to let her through. Her voice, high and clear, had just a trace of an Austrian accent.

Inside, a nurse was waiting for her by the operating theater. “You took your time,” she said, sounding harassed.

“Sorry,” the girl said, feeling a little stung. They’d got here as quickly as they could.

“No, I’m sorry,” replied the nurse, sighing. “It’s just that we need the blood pronto.” She took the crates from the girl and pushed the theater’s swing door open with her hip. The girl caught a glimpse of the surgeon inside. There was blood on his rubber apron.

“Is it bad?” she whispered.

The nurse paused at the door. “They’re bringing the wounded up from the coast on the trains,” she said quietly. “This one’s lost both legs. Still, this should save him. See you.”

Back outside, Judy had turned the car around and was revving the engine impatiently.

“
Mein Gott
, it is big mess in there,” said the girl, clambering back in, glad to be away from the carnage inside. “Where to now?” she asked.

“Whitechapel,” Judy replied, stepping on the accelerator, and the car shot back out into the traffic. “Just be thankful you’re not at Dunkirk, duckie, or back in Austria. Them Nazis ’ave got us on the run, but we’re not beaten yet. Churchill will save us, you mark my words.”

The Marriage Wheel by Susan Barrie
Desire Me Now by Tiffany Clare
Submitting to the Boss by Jasmine Haynes
Entangled Love by Gray, Jessica
The Virgin Bet by Olivia Starke
Matriarch by Karen Traviss
A Grown-Up Kind of Pretty by Joshilyn Jackson
Let It Snow (The Hope Falls Series) by Shawn, Melanie
Morganville Vampires 11: Last Breath by Rachel Caine
Far from the Madding Crowd by Thomas Hardy