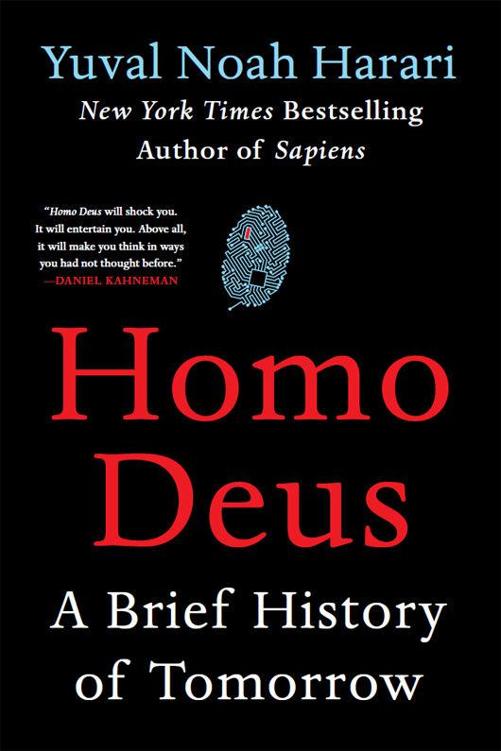 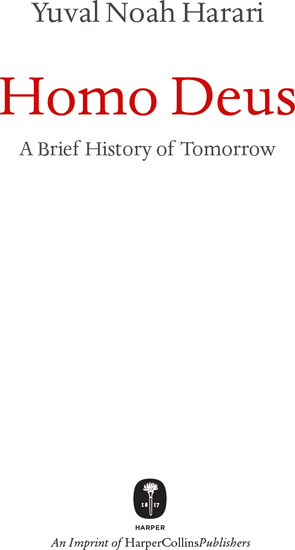 who lovingly taught me important things. 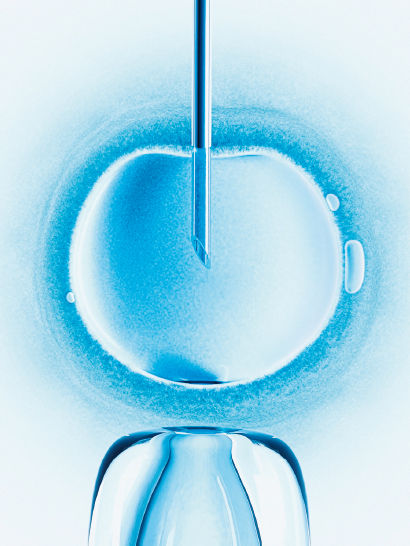 At the dawn of the third millennium, humanity wakes up, stretching its limbs and rubbing its eyes. Remnants of some awful nightmare are still drifting across its mind. ‘There was something with barbed wire, and huge mushroom clouds. Oh well, it was just a bad dream.’ Going to the bathroom, humanity washes its face, examines its wrinkles in the mirror, makes a cup of coffee and opens the diary. ‘Let’s see what’s on the agenda today.’

For thousands of years the answer to this question remained unchanged. The same three problems preoccupied the people of twentieth-century China, of medieval India and of ancient Egypt. Famine, plague and war were always at the top of the list. For generation after generation humans have prayed to every god, angel and saint, and have invented countless tools, institutions and social systems – but they continued to die in their millions from starvation, epidemics and violence. Many thinkers and prophets concluded that famine, plague and war must be an integral part of God’s cosmic plan or of our imperfect nature, and nothing short of the end of time would free us from them.

Yet at the dawn of the third millennium, humanity wakes up to an amazing realisation. Most people rarely think about it, but in the last few decades we have managed to rein in famine, plague and war. Of course, these problems have not been completely solved, but they have been transformed from incomprehensible
and uncontrollable forces of nature into manageable challenges. We don’t need to pray to any god or saint to rescue us from them. We know quite well what needs to be done in order to prevent famine, plague and war – and we usually succeed in doing it.

True, there are still notable failures; but when faced with such failures we no longer shrug our shoulders and say, ‘Well, that’s the way things work in our imperfect world’ or ‘God’s will be done’. Rather, when famine, plague or war break out of our control, we feel that somebody must have screwed up, we set up a commission of inquiry, and promise ourselves that next time we’ll do better. And it actually works. Such calamities indeed happen less and less often. For the first time in history, more people die today from eating too much than from eating too little; more people die from old age than from infectious diseases; and more people commit suicide than are killed by soldiers, terrorists and criminals combined. In the early twenty-first century, the average human is far more likely to die from bingeing at McDonald’s than from drought, Ebola or an al-Qaeda attack.

Hence even though presidents, CEOs and generals still have their daily schedules full of economic crises and military conflicts, on the cosmic scale of history humankind can lift its eyes up and start looking towards new horizons. If we are indeed bringing famine, plague and war under control, what will replace them at the top of the human agenda? Like firefighters in a world without fire, so humankind in the twenty-first century needs to ask itself an unprecedented question: what are we going to do with ourselves? In a healthy, prosperous and harmonious world, what will demand our attention and ingenuity? This question becomes doubly urgent given the immense new powers that biotechnology and information technology are providing us with. What will we do with all that power?

Before answering this question, we need to say a few more words about famine, plague and war. The claim that we are bringing them under control may strike many as outrageous, extremely naïve, or perhaps callous. What about the billions of people scraping a living on less than $2 a day? What about the ongoing AIDS
crisis in Africa, or the wars raging in Syria and Iraq? To address these concerns, let us take a closer look at the world of the early twenty-first century, before exploring the human agenda for the coming decades.

Let’s start with famine, which for thousands of years has been humanity’s worst enemy. Until recently most humans lived on the very edge of the biological poverty line, below which people succumb to malnutrition and hunger. A small mistake or a bit of bad luck could easily be a death sentence for an entire family or village. If heavy rains destroyed your wheat crop, or robbers carried off your goat herd, you and your loved ones may well have starved to death. Misfortune or stupidity on the collective level resulted in mass famines. When severe drought hit ancient Egypt or medieval India, it was not uncommon that 5 or 10 per cent of the population perished. Provisions became scarce; transport was too slow and expensive to import sufficient food; and governments were far too weak to save the day.

Open any history book and you are likely to come across horrific accounts of famished populations, driven mad by hunger. In April 1694 a French official in the town of Beauvais described the impact of famine and of soaring food prices, saying that his entire district was now filled with ‘an infinite number of poor souls, weak from hunger and wretchedness and dying from want, because, having no work or occupation, they lack the money to buy bread. Seeking to prolong their lives a little and somewhat to appease their hunger, these poor folk eat such unclean things as cats and the flesh of horses flayed and cast onto dung heaps. [Others consume] the blood that flows when cows and oxen are slaughtered, and the offal that cooks throw into the streets. Other poor wretches eat nettles and weeds, or roots and herbs which they boil in water.’
1

Similar scenes took place all over France. Bad weather had ruined the harvests throughout the kingdom in the previous two
years, so that by the spring of 1694 the granaries were completely empty. The rich charged exorbitant prices for whatever food they managed to hoard, and the poor died in droves. About 2.8 million French – 15 per cent of the population – starved to death between 1692 and 1694, while the Sun King, Louis XIV, was dallying with his mistresses in Versailles. The following year, 1695, famine struck Estonia, killing a fifth of the population. In 1696 it was the turn of Finland, where a quarter to a third of people died. Scotland suffered from severe famine between 1695 and 1698, some districts losing up to 20 per cent of their inhabitants.
2

Most readers probably know how it feels when you miss lunch, when you fast on some religious holiday, or when you live for a few days on vegetable shakes as part of a new wonder diet. But how does it feel when you haven’t eaten for days on end and you have no clue where to get the next morsel of food? Most people today have never experienced this excruciating torment. Our ancestors, alas, knew it only too well. When they cried to God, ‘Deliver us from famine!’, this is what they had in mind.

During the last hundred years, technological, economic and political developments have created an increasingly robust safety net separating humankind from the biological poverty line. Mass famines still strike some areas from time to time, but they are exceptional, and they are almost always caused by human politics rather than by natural catastrophes. In most parts of the planet, even if a person has lost his job and all of his possessions, he is unlikely to die from hunger. Private insurance schemes, government agencies and international NGOs may not rescue him from poverty, but they will provide him with enough daily calories to survive. On the collective level, the global trade network turns droughts and floods into business opportunities, and makes it possible to overcome food shortages quickly and cheaply. Even when wars, earthquakes or tsunamis devastate entire countries, international efforts usually succeed in preventing famine. Though hundreds of millions still go hungry almost every day, in most countries very few people actually starve to death.

Poverty certainly causes many other health problems, and malnutrition shortens life expectancy even in the richest countries on earth. In France, for example, 6 million people (about 10 per cent of the population) suffer from nutritional insecurity. They wake up in the morning not knowing whether they will have anything to eat for lunch; they often go to sleep hungry; and the nutrition they do obtain is unbalanced and unhealthy – lots of starch, sugar and salt, and not enough protein and vitamins.
3
Yet nutritional insecurity isn’t famine, and France of the early twenty-first century isn’t France of 1694. Even in the worst slums around Beauvais or Paris, people don’t die because they have not eaten for weeks on end.

The same transformation has occurred in numerous other countries, most notably China. For millennia, famine stalked every Chinese regime from the Yellow Emperor to the Red communists. A few decades ago China was a byword for food shortages. Tens of millions of Chinese starved to death during the disastrous Great Leap Forward, and experts routinely predicted that the problem would only get worse. In 1974 the first World Food Conference was convened in Rome, and delegates were treated to apocalyptic scenarios. They were told that there was no way for China to feed its billion people, and that the world’s most populous country was heading towards catastrophe. In fact, it was heading towards the greatest economic miracle in history. Since 1974 hundreds of millions of Chinese have been lifted out of poverty, and though hundreds of millions more still suffer greatly from privation and malnutrition, for the first time in its recorded history China is now free from famine.

Indeed, in most countries today overeating has become a far worse problem than famine. In the eighteenth century Marie Antoinette allegedly advised the starving masses that if they ran out of bread, they should just eat cake instead. Today, the poor are following this advice to the letter. Whereas the rich residents of Beverly Hills eat lettuce salad and steamed tofu with quinoa, in the slums and ghettos the poor gorge on Twinkie cakes, Cheetos,
hamburgers and pizza. In 2014 more than 2.1 billion people were overweight, compared to 850 million who suffered from malnutrition. Half of humankind is expected to be overweight by 2030.
4
In 2010 famine and malnutrition combined killed about 1 million people, whereas obesity killed 3 million.
5

Revolution by Dale Brown
A Time to Surrender by Sally John
Snapper by Felicia Zekauskas, Peter Maloney
Prude & Prejudice by Francene Carroll
My Sister’s Secret by Tracy Buchanan
All Tied Up: Pleasure Inn, Book 1 by All Tied Up Pleasure Inn, Book 1
Trapped by S. A. Bodeen
Dollenganger 04 Seeds of Yesterday by V. C. Andrews
Ryan White - My Own Story by Ryan & Cunningham White, Ryan & Cunningham White
Star Trek: The Original Series - 162 - Shadow of the Machine by Scott Harrison