Read How the Marquess Was Won Online

How the Marquess Was Won 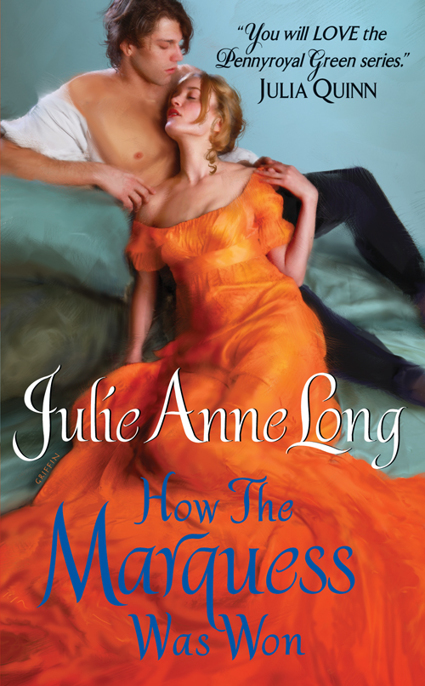 How the Marquess Was Won

I
t wasn’t unusual to see a man stagger into or out of the Pig & Thistle, Pennyroyal Green’s pub. Nor was it unusual for the entrance door to fly open hard enough to bounce against the wall. After all, a half dozen ales into an evening a man’s arms and legs could mutiny on him and do things like fling open doors with too much strength, pinch the bottoms of passing females, and refuse to hold him upright.

But Colin Eversea was tormenting his brother Chase with talk of cows
again
, and since Chase had a perfect view of the doorway, he looked up from his ale and studied the man now framed there. The breeze caught hold of the hem of his coat, rippling it fitfully. His trousers were tucked into Hessians; the toes were dulled with mud. His dark hair was pushed back over a high pale forehead, upon which Chase could see what appeared to be a fading bruise.

The man swayed almost imperceptibly. He frowned, as if he was puzzled to find himself there, or had forgotten why he entered. He turned, slowly, and stared with glazed eyes into the crowd in the pub. And then his hand slipped inside his coat . . .

Chase stiffened. Then half-rose from his chair.

And reflexively slipped his hand into his own coat and closed his fingers around the barrel of his own pistol.

His universe narrowed to the man’s hand, pressed over a pristine linen shirt.

Seconds later, Chase saw one drop of scarlet ooze between the man’s fingers. The man’s head tipped back, and he dropped hard to one of his knees, and then the other.

Chase nearly scrambled over Colin, jumping across the top of the scarred table, to reach the man before he fell.

Colin appeared on his heels, and Ned Hawthorne seconds later. With a sort of tacit coordination (it wasn’t the first prone man they’d born out of a room) they scooped the man up and whisked him away to the storeroom behind the bar as if he were a delivery of potatoes, as a prone bleeding man was bad for business.

And if anyone noticed, they would just put it down to the fact that picking men up off the floor was common in the Pig & Thistle, too.

T
hey closed the door of the room, and deftly, wordlessly, lowered him onto a pallet usually used for those needing to sleep off ale, and together they slipped him out of his coat. Chase and Colin were veterans of war. One never forgot how to tend to the fallen.

“Can you speak?” Chase folded the coat neatly and quickly. Old military habits of tidiness die hard. He handed it to Colin, who raised his eyebrows at its quality.

“Yes.” The syllable was a gasp etched in pain.

He opened his eyes then. They were the color of whiskey; the face was refined, strong-boned . . . strangely familiar.

“An Eversea. Thank God.” The voice was hoarse but clear. “Not a Redmond.”

“How refreshing. That isn’t something we hear very often. And I thank God for that every day, too,” Chase said. “You are?”

A hesitation. And then he rasped out his name. “Dryden.”

“Shot, stabbed?” They eased him back onto the pallet, and Colin handed Chase a knife he’d slipped out of his boot. Chase slit open the Marquess’s shirt and gently pushed it from his shoulders.

And indeed he had been. The ball was near his shoulder, and a swift, closer inspection told Chase it was close to the surface of his skin. Thank God. They might be able to retrieve it whole. The blood was already congealing about the wound.

“A
woman
shot you?” This was from Colin.

“She might as well have done.” Humor through the pain now, the dry and gallows kind.

Two smart raps sounded on the door, a warning before Ned Hawthorne opened it. He handed whiskey and rags to Colin. “Sent for the doctor,” he reported with something like resigned cheer, “ ’case you lads ’ave need of ’im.”

Then vanished out the door again. His family had owned the Pig & Thistle since it was built centuries ago, and the marquess would hardly be the first man ever to mingle his blood with the sawdust on the floor.

“We’re going to see about getting the ball out, Dryden, so drink this. As fast as you can.” Chase shoved the flask into the man’s hand.

“No?” While his brother tore rags into neat bandage-sized strips, Colin wrapped his fingers round Dryden’s wrist and found his pulse quick but strong, not thready. Which meant he hadn’t yet lost a dangerous amount of blood.

“You’re lucky, Dryden,” Colin told him. We can probably get the ball out and bind you up without stitching it. But you won’t be dancing the reel anytime soon. Where the devil did you get these scratches on your chest? And the bruise on your head?”

“Hate the reel,” was all Dryden said, after a considering moment, ignoring the other questions. “I rather like the waltz, however.” He sounded wistful, drifting now thanks to pain and the whiskey.

“Do you? Drink that whiskey, now,” Chase ordered.

He gulped down more. His throat moved in hard swallows. “She’s not even
pretty
.” The marquess seemed intent on making a case.

“Beautiful, though,” the marquess muttered grimly. “Damn her eyes.”

“Is she?” Colin humored.

“And dear God, but she’s
so
. . .” Dryden shook his head, and winced. “She has a . . .” He pointed vaguely at his face, and then his hand flopped down and turned palm up. There were apparently no adequate words to describe this paragon.

Chase frowned at his brother. “Ever been shot before, Dryden?”

“First time. Bayoneted once before, though.”

“Ah. Well, you aren’t going to like this next bit.”

This got them a faint smile. “Can’t imagine why. It’s been delightful so . . . far.” He took another long gulp of whiskey.

“I’m going to clean the wound, and then we’re going to . . . do the rest. And trust me when I say I’ve done this any number of times before. You might faint, but we won’t raid your pockets if you do. Go on. Close your eyes if you need to.”

Chase was accustomed to giving orders.

Dryden’s head fell back. His breathing was shallow now. “Don’t want to close my eyes. She’s all I see.”

It was so startlingly frank and devoid in the sort of drama that usually accompanied such statements that the Eversea men momentarily froze with surprise.

And stared down at the regal Lord Ice speculatively.

“She doesn’t love
me
,” he said softly, finally.

It sounded like a correction of a previous implication. As though he was defending her honor.

They were terrible words to die on, if that’s what he was going to do.

Chase hesitated for a moment. “Get Adam,” he ordered his brother under his breath.

Colin was surprised. Telling a man he was going to live and then sending for the vicar, their cousin Adam, seemed a contradiction in terms, but when Chase Eversea issued an order it was nearly impossible for anyone near not to obey it.

P
hoebe Vale flung open the door to Postlethwaite’s Emporium of Lady’s Goods then threw her body against it, fighting with the wind to get it closed again. The bells looped to the door jangled frantically.

She paused to savor her view. Postlethwaite’s was Pennyroyal Green’s very own Aladdin’s cave. Everywhere was color and gleam and fingertip-seducing texture: Cases held silver and ivory buttons, satin bows and silk flowers, fine silk fans and fur muffs. A wall was devoted to spools of satin ribbon and silk thread; petal-fine elbow-length kid gloves were fanned on an antique escritoire; Chinese silk shawls and wool capes lolled about the place with indolent elegance. And in the corner were the bonnets and hats, all breathtakingly fashionable and very, very expensive, huddling together on their stands like aristocratic gossipers.

One bonnet in particular throbbed at the periphery of her vision.

Her heart lurched with joy—
it was still here!

And then she coolly, pointedly turned her back on it. She could feel it there, still, like the eyes of a spurned lover, on the back of her neck.

“Good afternoon, Miss Vale. Run all the way here, did ye?” Mr. Postlethwaite’s voice carried across the shop. He was standing behind the counter. “I was just sorting the mail.”

“Well, you know how it is, Postlethwaite. Papa won’t allow us to use the carriage until he’s had the gilt on the coat of arms repainted.”

“Tsk. Now canna have a carriage without the family coat of arms shinin’ from the door, can ye?
However
will the world know ye’re inside?”

“How you understand me, Postlethwaite! We are always in such accord!”

“And when you marry me, lass, we shall live out our days in bliss.”

“In time, my dear Postlethwaite, in time. I am sowing my wild oats, as you know.”

They grinned at each other. They both knew the only thing Phoebe was sewing was her own dresses, often twice over after picking out the stitches and turning the fabric to get more wear out of it. And Postlethwaite was a quarter of a century her senior if he was a day and had only a horseshoe-shaped patch of hair left on his head.

He cast an eye up at her through his spectacles, studied her briefly, then dropped his gaze again to the mail. “Niiivver would ’ave guessed,” he murmured dryly.