Read How to Be Alone (School of Life) Online

How to Be Alone (School of Life) 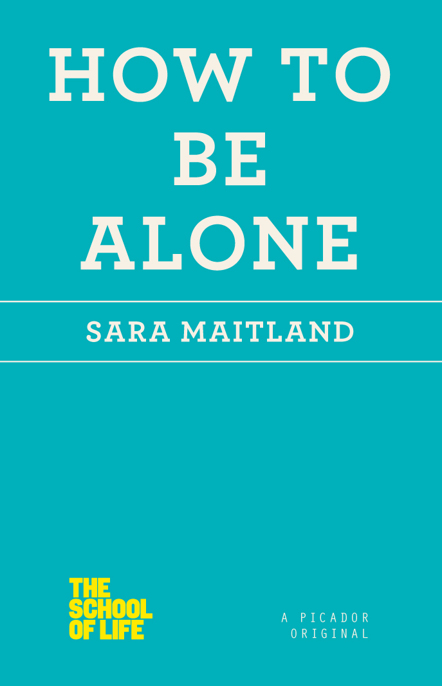 IN THIS AGE OF CONSTANT CONNECTIVITY, LEARN HOW TO ENJOY SOLITUDE AND FIND HAPPINESS WITHOUT OTHERS.

OUR FAST-PACED SOCIETY does not approve of solitude; being alone is antisocial and some even find it sinister. Why is this so when autonomy, personal freedom, and individualism are more highly prized than ever before? Sara Maitland answers this question by exploring changing attitudes throughout history. Offering experiments and strategies for overturning our fear of solitude, she helps us practice it without anxiety and encourages us to see the benefits of spending time by ourselves. By indulging in the experience of being alone, we can be inspired to find our own rewards and ultimately lead more enriched, fuller lives.

From the Forest: A Search for the Hidden Roots of Our Fairy Tales

A Book of Silence

HOW TO BE ALONE

The author and publisher have provided this e-book to you for your personal use only. You may not make this e-book publicly available in any way.
Copyright infringement is against the law. If you believe the copy of this e-book you are reading infringes on the author’s copyright, please notify the publisher at:
http://us.macmillanusa.com/piracy
.

II. Being Alone in the Twenty-first Century

2. Do Something Enjoyable Alone

5. Learn Something by Heart

IV. The Joys of Solitude

1. Consciousness of the Self

3. Relationship with the Transcendent

More from the School of Life Library

You have just started to read a book that claims, at least, to tell you how to be alone.

It is extremely easy to be alone; you do not need a book. Here are some suggestions:

Go into the bathroom; lock the door, take a shower. You are alone.

Get in your car and drive somewhere (or walk, jog, bicycle, even swim). You are alone.

Wake yourself in the middle of the night (you are of course completely and absolutely alone while you are asleep, even if you share your bed with someone else, but you are almost certainly not conscious of it, so let’s ignore that one for the moment); don’t turn your lights on; just sit in the dark. You are alone.

Now push it a bit. Think about doing something that you normally do in company – go to the cinema or a restaurant, take a walk in the country or even a holiday abroad – by yourself. Plan it out; the logistics are not difficult. You know how to do these things. You would be alone.

So what is the problem? Why are you reading this book?

And of course I do not know the answer. Not in your case, at least. But I can imagine some possible motives:

For some reason, good or bad, of which bereavement is perhaps the bitterest, your normal circle of not-aloneness has been broken up; you have to tackle unexpected isolation, you doubt your resources and are courageously trying to explore possible options. You will be a member of a fast-growing group – single-occupancy households in the UK have increased from 12 per cent of all households in 1961 to nearly 30 per cent in 2011.

Someone you thought you knew well has opted for more solitude – they have gone off alone to do something that excludes you, temporarily or for a longer period; you cannot really feel jealous, because it excludes everyone else too; you are a little worried about them; you cannot comprehend why they would do anything so weird or how they will manage. You want to understand.

You want to get something done – something that feels important to you. It is quite likely, in this case, that it is something creative. But you find it difficult to concentrate; constant interruptions, the demands of others, your own busy-ness and sociability, endless connections and contacts and conversations make it impossible to focus. You realize that you will not be able to pay proper attention unless you find some solitude, but you are not sure how this might work out for you.

You want to get something done – something that feels important to you and of its very nature has to be done alone (single-handed sailing, solo mountaineering and becoming a hermit are three common examples, but there are others). The solitude is secondary to you, but necessary, so you are looking for a briefing. This group is quite small, I think; most of the people who seriously want to do these sorts of things tend to be experienced and comfortable with a degree of aloneness before they become committed to their project.

You have come to the disagreeable awareness that you do not much like the people you are spending time with; yet you sense that you are somehow addicted to them, that it will be impossible to change; that any relationship, however impoverished, unsatisfying, lacking in value and meaning, is better than no relationship; is better than being alone. But you aren’t sure. You are worried by the very negative responses you get whenever you bring the subject up.

You are one of those courageous people who want to dare to live; and to do so believe you have to explore the depths of yourself, undistracted and unprotected by social conventions and norms. You agree with Richard Byrd, the US admiral and explorer, who explained why he went to spend the winter alone on the southern polar ice cap in 1934: ‘I wanted to go for experience’s sake; one man’s desire to know that kind of experience to the full … to be able to live exactly as I chose, obedient to no necessities but those imposed by wind and night and cold, and to no man’s laws but my own.’ You do not, of course, need to go all the way to Antarctica to achieve this, but you do need to go all the way into yourself. You feel that if you have not lived with yourself alone, you have not fully lived. You want to get some clues about what you might encounter in this solitary space.

You feel – and do not fully understand the feeling – that you are missing something. You have an inchoate, inarticulate, groping feeling that there is something else, something more, something that may be scary but may also be beautiful. You know that other people, across the centuries and from a wide range of cultures and countries, have found this something and they have usually found it alone, in solitude. You want it. Whatever it is. You are reading this book not because you want to know how to be alone, which is perfectly easy as soon as you think about it, but because you want to know why you might want to be alone; why the whole subject fills you with both longing and deep unease. You want to know what is going on here.

But actually the most likely reason why you are reading this book (like most books) is curiosity – why would someone
write
this book?

And I can answer that question, so that is where I am going to begin.

I live alone. I have lived alone for over twenty years now. I do not just mean that I am single – I live in what might seem to many people to be ‘isolation’ rather than simply ‘solitude’. My home is in a region of Scotland with one of the lowest population densities in Europe, and I live in one of the emptiest parts of it: the average population density of the UK is 674 people per square mile (246 per square kilometre). In my valley, though, we have (on average) over three square miles
each.
The nearest shop is ten miles away, and the nearest supermarket over twenty. There is no mobile-phone connection and very little through traffic uses the single-track road that runs a quarter of a mile below my house. Often I do not see another person all day. I love it.

But I have not always lived alone. I grew up in a big family, one of six children, very close together in age, and in lots of ways a bit like a litter of puppies. It was not a household much given to reflection or introversion – we were emotional, argumentative, warm, interactive. We did things together. I am still deeply and affectionately involved with all my siblings. I became a student in 1968 and was fully involved in all the excitement and hectic optimism of those years. Then I was married and had two children. I became a writer. I have friends – friendship remains one of the core values of my life. None of this looked like a life of solitude, nor a good preparation for living up a back road on a huge, austere Scottish moor.

What changed was that I got fascinated by silence; by what happens to the human spirit, to identity and personality when the talking stops, when you press the off button, when you venture out into that enormous emptiness. I was interested in silence as a lost cultural phenomenon, as a thing of beauty and as a space that had been explored and used over and over again by different individuals, for different reasons and with wildly differing results. I began to use my own life as a sort of laboratory to test some ideas and to find out what it felt like. Almost to my surprise, I found I loved silence. It suited me. I got greedy for more. In my hunt for more silence, I found this valley and built a house here, on the ruins of an old shepherd’s cottage. I moved into it in 2007.

In 2008 I published a book about silence.
A Book of Silence
was always meant to be a ‘hybrid’ book: it is both a cultural history and a personal memoir and it uses the forms and conventions of both genres melded into a single narrative. But it turned out to be a hybrid in another way that I had not intended. Although it was meant to be about silence, it turned out to be also about solitude – and there was extensive and, I now think, justifiable criticism of the fact that it never explicitly distinguished between the two. Being silent and being alone were allowed to blur into each other in ways that were confusing to readers. For example, one of the things I looked at in
A Book of Silence
was the actual physical and mental effects of silence – ranging from a heightened sensory awareness (how good food tasted, how extreme the experiences of heat and cold were), through to some curious phenomena like voice-hearing and a profound loss of inhibition. These effects were both reported frequently by other people engaged in living silent lives and experienced by me personally in specific places like deserts or mountains. However, a number of commentators felt that these were not effects of silence per se, but of solitude – of being alone. After the book was published I also began to get letters from readers wanting advice … and more often than I had anticipated, it was not advice on being silent but on being alone. Some of this was because there are at least two separate meanings to the word silence. Even the
Oxford English Dictionary
gives two definitions which are mutually exclusive: silence is defined as both the absence of any sounds and the absence of language. For many people, often including me, ‘natural noises’ like wind and running water do not ‘break’ silence, while talking does. And somewhere in between is the emotional experience that human-made noises (aeroplanes overhead, cars on distant roads) do kill silence even where the same volume of natural sound does not.