Read I Hate This Place: The Pessimist's Guide to Life Online

I Hate This Place: The Pessimist's Guide to Life 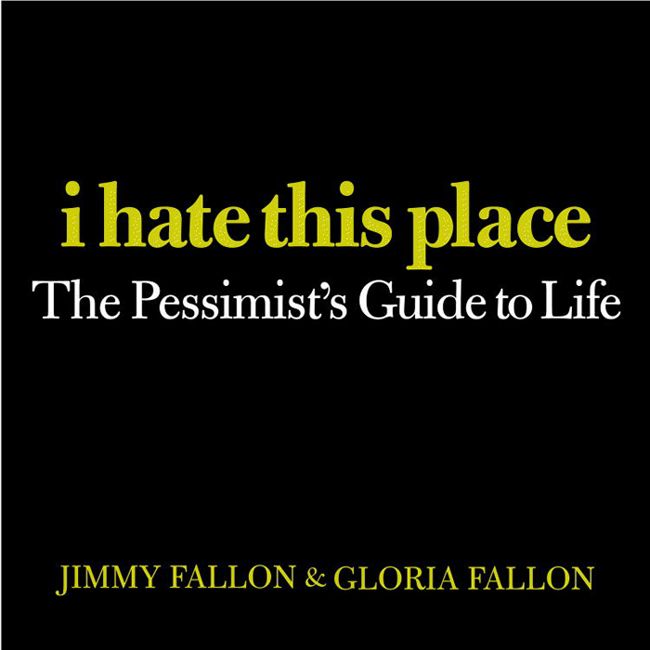 With special thanks to Randi Siegel

Chapter One: If You Were Thinking Of…

A Final Note from the Pessimist

People seem to enjoy saying “Is this glass half-full or half-empty?”

This book is dedicated to our grandmother, Gloria Feeley, who after reading the first manuscript said, “This book stinks.” We love and miss you.

A
re you tired of looking for the sunny side of the street? The pot of gold at the end of the rainbow? The silver lining in every cloud? I am. I’ve never found any of these things, have you?

Are you sick of reading those meditational self-help books that are supposed to win you friends, give you inner peace, and make you rich? I am—and why? They don't work, and that's that. I’m here to tell you the truth, plain and simple, in my complete guidebook compiled from my own experiences. This book will provide you with daily affirmations tailored to destroy any illusions you might have. It will warn you of situations that will surely lead to embarrassment. It will explain in simpler English what people are really trying to say when they talk to you, and it will relate some of my personal reflections and bitter experiences.

So, you can take my advice or leave it. Call me a pessimist, call me a grouch—it doesn't matter to me. Because guess what? We don't make that much of a difference to each other anyway.

If You Were Thinking Of…

Going to Happy Hour to meet some new friends:

Think again. You'll be the only person without a friend or a date, and you're too shy to just go up and introduce yourself to strangers. You're just going to sit by yourself, paying for drink after drink, until you're a pathetic, quivering mass at the bottom of your barstool. It'll turn out to be Sad Hour instead, for you and everyone involved.

Having a birthday party:

For What? To celebrate how many years you've been dragging yourself around on this earth? Anyway, only surprise birthday parties take away the stress and embarrassment of nobody showing up. Atleast then you can say, “Well, I didn't want a stupid party anyway.”

Calling up an old friend after a long time:

Seriously, rethink this. Any conversation that begins with “Hey, remember me?” is doomed from the get-go.

This is okay, just remember that you will most likely run into people you don't want to talk to, and also there is more of a chance that you can get killed.

Going to a family reunion:

Your immediate family is bad enough. Do you really want to see the people who are responsible for starting this whole mess?

Remember there is a possibility that this could be your coffin.

Sure, people have fun dancing, right? Yeah, they'll have more fun watching you do the “Can't Buy Me Love” dance by yourself.

Gambling at a casino:

Do you think that after all these years you're going to be lucky? You might as well throw your money out the window—at least then you won't have to pay for a lonely hotel room.

Well it's one for the money, two for the show, three to get ready and…change this song, it's giving me a goddamn headache!

Going to the wedding you were invited to:

Just send a card with money, that's all they really wanted anyway.

Talking to that person you think is “giving you the eye”:

Keep your mouth shut. The only reason they keep looking at you is because you probably have some food stuck in your teeth.

You'll probably just break your ankle or twist your knee. You have to be in shape to get into shape—it's a no-win situation, like so many others.

Going to the laundromat to meet the people:

Just say you luck out and meet someone who's interested in you. Do you really want to be with a person who can't afford a washer and dryer?

“Let me have your number.”

“Let me have your number so that I don't have to give you mine.”

“I hope I never run into you again!”

“And while you're looking, I’m leaving!”

“Thank you for your application. Your résumé was extremely impressive.”

“You didn't get the job, and I blew my nose in your résumé.”

“I hope you kept the receipt.”

“Are we having fun or what?”

“I have no idea what your name is, nor do I even care.”

“What are you doing later?”

“I hope you aren't going to be where I am later.”

“Oh, can you hold on a minute? I have another call.”

“Thank God for the mute button!

“What you just said is so boring that I don't even want to add a little information of my own to it. I’d rather just classify it as ‘interesting’ and not be associated with it at all.”

“What a great way to end this infernal conversation!”

“Who the hell invited this jerk?”

“Don't worry about it—this round is on me.”

“And the next four are going to be on you, dork.”

“I just want you to feel as unimportant as I think you are.”

“I never want to meet anyone like you again.”

Personal Reflections of the Pessimist

Some days I wake up and stare at the ceiling.

Then I think, “Man, I wish it was tomorrow.”

I’m starting to think that I’m the butt of a joke that the whole world is in on.

Growing up, I always wanted to be just like Abe Lincoln.

I usually avoid people who are nice to me, because I know they're going to ask for a favor sooner or later.

Sometimes I wish I had a terrible childhood, so that at least I’d have an excuse.

There's nothing better than a day in the sun, if you can ignore all the ultraviolet rays that give you skin cancer.

Everyone keeps telling me to travel and see the world because that's where all the opportunities are.

Like the opportunity that I’ll get killed in a foreign country!

Someone should invent action figures that are lanky and have no super powers. Then the youth of today might respect people like me.

Sometimes I think, “This is all a test to see how strong you are.

There must be something higher after this, some reward…”

Then I think, “Yeah, right, wake up and smell your instant coffee.”

Sometimes I cross the street with my eyes shut.

If I’m ever at a party, I always take drinks from other people, hoping someone put something in it.

Every time I talk to someone, I know I’m just wasting their time.

This holiday season give the gift that keeps on giving—a plastic middle-finger keychain.

With all the ice-cream men out there driving around, you'd think one of them would have the sense to blast some decent music for a change.

I often try to reassure myself by saying, “Well, at least it can't get any worse.” But the truth is, it always can. And that's what really terrifies me.

They say a dog is man's best friend.

That's if you're lucky enough to get one of those “friendly” dogs.

Sometimes I think the reason I don't get along with anyone else is because I’m superior.

Then I think to myself, “What's so great about me?”

I have a hard time looking at myself, let alone other people.

Let's hear it for carbon monoxide, right everybody?

People seem to enjoy saying, “Is the glass half-full or half-empty?” They stop smiling when I say, “It'll be empty when I pour it over your head.”

When I see professional clowns, mimes, or people who make balloon animals, I always think of their relatives and how disappointed they must be.

People say that Nostradamus predicted both world wars, the rise of Hitler, and the assassination of Kennedy.

Too bad he put it in a code that no one could understand until the events happened. Some prophet he was.

I bought a package of low-fat cookies that had 50 percent more cookies in the box than usual, so if I ate the whole box I’d gain more weight than if it was a regular-size box of cookies. They should call these types of cookies “High-Fats” because that's what everyone's going to say when I walk in the room.

I went to a fast food restaurant and had to wait twenty minutes.

I wasn't mad that I didn't get my food quickly.

I was simply outraged that someone else was in control of wasting my time.

Why should I date? Oh, I know! Just so I can get to know a person so well that I start to get attached to them, spend my money on them, neglect my friends and family, and then get dumped so that I’m worse off than I ever was.

As if my social life wasn't bleak enough, Caller ID had to come along. My number might as well be listed as “Don't Pick Up the Phone.”

When people talk to me, I usually nod my head and agree with whatever they are saying. If they continue to talk, I then say, “Are you still talking to me, horseface?”