Read I Need You Online 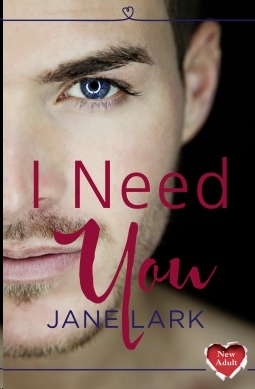 A division of HarperCollins
Publishers

to be identified as the author of this work.

A catalogue record for this book is

available from the British Library

This novel is entirely a work of fiction.

The names, characters and incidents portrayed in it are

the work of the author’s imagination. Any resemblance to

actual persons, living or dead, events or localities is

All rights reserved under International

By payment of the required fees, you have been granted

and read the text of this e-book on screen.

No part of this text may be reproduced, transmitted,

stored in or introduced into any information storage and

retrieval system, in any form or by any means,

whether electronic or mechanical, now known or

hereinafter invented, without the express

"Jane Lark has proved what a writing talent she really is. This is an engrossing and telling read…. Be prepared to have your heart squeezed!"

"An amazing book. It is dark and edgy yet flirtatious and even made me laugh. It’s such a combination that made me not want to put my kindle down at all."

After the Final Chapters

"Dark, gritty and wholly mesmerizing, I Found You is a haunting and compelling read you will not easily forget!"

Guilt can eat away at you, but love can cut like a knife…

But now Jason and Lindy have broken up and Billy can’t help but be there for the girl he’s loved from afar for so long. She’s hurting.

Fighting to find a road to the future, Lindy’s heart hurts. She’s trying to escape the truth, but Billy keeps making her face it – and it’s ugly. How can she keep living when it feels like everything around her is made of glass and it could shatter at any moment?

Her one constant is Billy. Only, rebound isn’t his style and when Lindy starts to see him in a different light, he just can’t trust her. He’s no one’s second best.

Jason’s hand gripped my shoulder as we walked. “I’m glad you agreed to this. It’s cool we’re talking again.”

Glancing sideways, I smiled. I felt good. We’d had a few beers, talked and the world seemed a lot better. We hadn’t talked for months but he’d texted earlier and said, “Rach had the baby. A boy. We’re calling him Saint. And, Billy, I need someone to go wet his head with… I want it to be you.”

I’d wanted things to be right for half the months we hadn’t talked; I was glad he’d made a move to fix it.

Stars pin-pricked the black sky above. But the street lamps lit the ground white and smothered the true splendor of the night sky. Out at the lake you could see millions, not thousands, of stars. They were up there, just hidden by the brighter, closer, streetlamps, and yet if you were in space, each star was a sun, and it would be loads brighter.

Jason swayed and his fingers gripped my shoulder firmer for a moment, before falling away.

We weren’t that drunk, although I was drunk enough to be into philosophy––and I’d definitely had too many to drive, so we were walking home, and laughing like we hadn’t laughed since we were kids.

“The store.” Jason pointed over the road, like he announced
The White House
, on some tour bus journey.

I laughed.
The store
was his dad’s. Nope. Jason’s now. His dad had signed the business over. He’d been telling me all that shit earlier.

“Hey, why don’t we go in and steal the spray paint, like we did when we were kids.” Jason’s words slurred together a little.

“’Cause you’d be stealing from yourself and we aren’t kids.”

He laughed. “I’ll never forget Mr. Dent’s red face when he charged out of his house…”

“And you had to do it to your dad’s neighbor. The guy knew us, there was no getting away.”

Jason grinned. “That guy shouldn’t have taken my ball hostage.”

“You’re an idiot.” A surge of the camaraderie we’d shared for years hit me as I looked over at the store.

A figure, a woman, sat slumped forward a little on the steps. “Shit! Jason! There’s someone over there!” I looked left and right, checking the street was clear, then crossed.

“Shit.” Jason ran past me. “It’s Lindy!” His ex-fiancée, my ex one-night-stand, and the reason we’d not spoken for months.

Her head came up and her body swayed. She looked sick.

Pity, need and anger kicked my gut. I loved and hated her.

The bracelet on my wrist felt like it tightened, like a rope pulling me in her direction, with an urgency that pissed me off. I’d done enough chasing, but my stupid fucked-up heart refused to let her go.

Jason squatted down next to her, his hand on her shoulder. “Lind, are you okay?”

She wasn’t. She was wasted. She’d had more to drink than either of us. Her head rolled on her shoulders.

She turned away from Jason, gripped the step with her hands, and threw up.

She and I had fallen out partly ‘cause of her drinking. She’d stopped being herself.

She retched. Jason rubbed her back.

I stood there with my hands in my pockets, watching, like I’d always done. The leopard I’d had inked on my chest sank its claws of jealousy into my skin.

“Lind, is someone coming to meet you? Have you got a ride home?”

When she stopped retching, she took a breath, wiped her mouth on her sleeve then glared at Jason. “Just fucking leave me alone! Don’t touch me!” That was the other reason she and I had parted ways, as friends. We’d never really been anything else, but finally I’d given up on even that option––because when Jason had finished with her, he’d opened up her vicious streak. It could hit at anyone, anytime.

Jason lifted his hands, stood up and stepped back. “Okay. I’m not touching you. But you need to get home, and you’re in no state to get there.”

I stepped forward, my hands slipping out of my pockets. “Lindy, it’s Billy…” I touched her shoulder, but her arm swiped out to knock me away. “Get off me, you’re no better. Just leave me alone!” That wasn’t an option.

“I’ll call her dad,” Jason pulled his cell out of his pocket.

Great, her dad; a cop was not gonna be thrilled. This didn’t look good.

Her gaze turned to me but she was too drunk to focus. “Don’t call him.”

I saw the cogs of thought shifting in her eyes as she realized I was with Jason. “We haven’t got a choice, we’ve been drinking, we can’t take you home.”

Her face screwed up. “Why?” She pointed at Jason, who talked into his cell a few feet away.

She was probably so drunk she’d need her stomach pumped. I’d never seen Lindy this bad. “Lind, how did you get down here?”

She mumbled something but I didn’t understand it.

Jason came back over. “Your dad’s on his way.”

“Go away, Jason! Just fuck off and leave me alone!” Last time I’d seen her she’d been drunk and swearing at Jason.

She tried to stand.

She pushed me away and turned to be sick again. Jason came close to help her instead. But she shoved him away too. “You don’t care! Just go away!”

But he did care, and I cared.

We looked at each other.

I felt like shit. The girl was beyond helping; she’d got hurt and broken, and it was like she was unfixable.

“Lindy, I never meant to hurt you. I’m sorry I did…” Jason tried to help her again.

She curled up on the steps, lying on them, her face buried in her crossed arms, looking isolated, even though we stood there.

Jason straightened up and his hands slipped into his pockets.

I squatted back down. “Lind, it’s okay. Your dad’s coming. You’re gonna be okay.”

She didn’t look like she’d ever be okay, though.

I rested a hand on her back. Her body jerked like she sobbed her heart out, but she wasn’t making a sound.

I looked up at Jason. He pulled his cell out of his pocket. “I’m gonna call Mom, she or Dad can come and pick us up. Rach will get worried if I’m any later.”

His wife had bipolar disorder and I’d never seen a guy as protective of anyone as he was of Rachel. I couldn’t imagine what that must make Lindy feel. She’d been engaged to him until a little over six months ago––then he’d met Rachel.

The guy had back-pedaled at ninety miles an hour. Within two months he’d dumped Lindy, got married to Rachel, and she’d had a kid on the way. That was the baby’s head we’d just been wetting.

She was too difficult, too angry, too judgmental, too everything. That was why I’d given up on her. But she’d been dating Jason for years, and in all those years we’d been friends too. We’d gone to college together.

Tonight had been about a new start, drawing a line on the past, so Jason and I could move on, but we couldn’t when Lindy was like this.

A siren screamed in the distance. It got closer. Shit. I stood up. Jason looked at me and said something to end his call, then slipped his cell back in his pocket.

The cop car sped up Main Street. Its wheels screeched when it pulled up on the parking lot.

Great. Her dad was angry.

The driver’s door opened and Mr. Martin stepped out.

Jason answered, “We were walking home, Dwayne, and Billy spotted her on the steps––”

“You don’t know what she drank?” Mr. Martin walked over.

I moved out of the way.

Lindy’s parents had used to be really social; we lived in a small town, everyone knew everyone, but I hadn’t seen them for months,

Jason looked down, his gaze scanning the parking lot near Lindy. “There’s nothing around to say she’s drunk anything.”

Her dad squatted down and touched her shoulder. “Lindy?” I’d thought the way he’d pulled up, he’d be shouting at her, but his voice was more concern than frustration.

Jason and I had encountered his temper as kids, the day we’d stolen that spray can. It wasn’t fun.