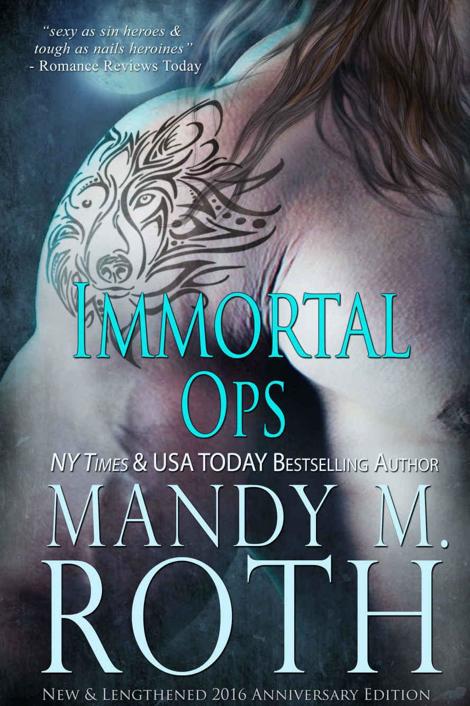 Dedication and Note from the Author

All books copyrighted to the author and may not be resold or given away without written permission from the author, Mandy M. Roth.

This novel is a work of fiction. Any and all characters, events, and places are of the author’s imagination and should not be confused with fact. Any resemblance to persons, living or dead, or events or places is merely coincidence. Novel intended for adults only. Must be 18 years or older to read.

Mandy loves hearing from readers and can be found interacting on social media.

(Newsletters: I do not share emails and only send newsletters when there is a new release/contest/or sales)

Immortal Ops Team Captain Lukian Vlakhusha is having issues with his newest target, Peren Matthews. His higher-ups want her eliminated. He simply wants her. The alpha side of him demands he claim her—that is, if she’ll have him. After all, he’s what she fears most—a wolf shifter. But there is more to Peren than even she’s aware of and the enemy is closer than anyone imagined.

Books In Each Series Within The Immortal Ops World.

This list is NOT up to date. To see an updated list of the books within each series under the umbrella of the Immortal Ops World please visit MandyRoth.com. Mandy is always releasing new books within the series world. Sign up for her newsletter at MandyRoth.com to never miss a new release.

You can read each individual series within the world, in whatever order you want...

Dedication and Note from the Author

To the fans of the Immortal Ops Series, thank you for your continued dedication and for your love of the I-Ops. I can’t believe it’s been
well
over a decade since Immortal Ops book one was first published (2004) and even longer since it was first written. I will forever be thankful to my father for instilling in me a love of science fiction; to my grandfather for giving me such a love of history that I found myself fascinated with what the world would have been like if events ended differently—or maybe didn’t end at all (hint, hint); to my mother who has always told me to dream big; to my brother who was the first victim (big grin) of listening to me tell tales; to my husband for telling me to keep going, not to give up even when it seemed like the best choice; to my sons who have brought me so much happiness (and a new appreciation for stain removal tips and tricks, not to mention making me quite the skilled cut and scrape fixer); and last but not least, to everyone who has fallen in love with my characters and encouraged me to keep writing. I can’t thank you all enough for your support. In addition, I’d like everyone to remember the men and women in the Armed Services who are, at this very moment, putting their lives on the line for our freedom.

A note from the author about the expanded editions and what inspired The Immortal Ops:

Many things combined to create the perfect storm, if you will, for how I came up with the series idea well over a decade ago. Having been heavy into marketing and advertising and then suddenly finding myself needing to stay home to care for my boys, one of whom had additional needs, I was left craving a creative outlet.

I first tried to get my “fix” by playing video games after the boys were asleep at night. I was online and playing the first day Xbox Live launched (November 2002). I found myself getting very into first-person-shooters and military games. The more I got into playing video games, the more I wanted to read about the actual history behind the games. I found myself talking with friends who had served our country. I would devour anything they wanted to offer, listening, completely swept up in it all. Each story shared a common theme—a strong sense of brotherhood.

This appealed to me
,
and in a relatively short period of time, I decided to do something about it. That impulse, combined with my love of history, science fiction, the paranormal
,
and technology, as well as my love of things that go bump in the night, really was a recipe for the Immortal Ops Series to be born from my imagination. From a very early age, I’ve been fascinated with the supernatural, myths and legends. I have always read books that revolve around the supernatural. I cut my teeth on Stephen King, Clive Barker, Anne Rice
,
and the classics. Two books that made a huge impression on me were
The Island of Dr. Moreau
,
and of course
Dracula
.

The more I found myself digging into the history of the military and of world wars, the more I kept getting this thought in the back of my brain, pushing me forward. Urging me to combine both loves—supernatural and history. I thought, what would happen if I took a team of men who were in the military, and they were a paramilitary group, a black ops type of thing
,
and I combined them with my love of the paranormal?

The scary part about the Ops series is that it was born from events that actually happened in history, just with a large fictional spin put on it. I asked myself, what if I took from history, from eugenics, which so many assume started in Nazi Germany
,
and threaded it into the very fabric of the military team? What if I were to take a page from history and the horrible cross-breeding attempts made by Ilya Ivanov and the Nazis to create super-soldiers, who were ape and human hybrids? And what if I were to weave in even more aspects, like cloning, additional genetic engineering
,
and so on? What if I went a step beyond and brought in other parts of history that revolve around attempts at making super-soldiers or controlling the minds of humans?

What would you be left with? How damaged would the men be? What kind of government would do this? What if I were to build off the history of it all, have it where America made super-soldiers behind the scenes, and then drew back and wanted to cut ties and stop everything when Nazi Germany rose and the backlash from that hit, but, in reality, they didn’t stop? And with scientific advances, how would that work? What would it look like? The answer seemed simple to me. Take all these questions to what I felt was their logical conclusion and to also blend in what I love—werecreatures and vampires.

So the idea to have shape
-
shifting military men who were created by the government was born. And that was how I came up with The Immortal Ops Series. I started writing in 2000: thoughts, ideas, very short stories
,
and then full novels and novellas. The Ops were among the first things I put together and it wasn’t long after that I was published (early 2004). My then-editor asked me if I could write something that was third-person point of view, instead of first-person, which I had first been published in. Since I had the Ops already started and the series all mapped out, it was just a matter of getting it to work as a third-person book, rather than first. Honestly, I wasn’t sure I could. I’d mapped the series originally to be first-person. It took some elbow grease, but in the end it worked and the first four books were published. Reader support for them has been amazing.

Sadly, I found I had to cut a lot to make the book fit with word count restrictions then, but I’m happy to report that I have the rights back
,
and the first four books are being re-released with their original content.

Immortal Ops packs the action of a Hollywood thriller with the smoldering heat that readers can expect from Ms. Roth. Put it on your hot list…and keep it there!
—The Road to Romance

5 Stars—
Her characters are so realistic, I find myself wondering about the fine line between fact and fiction…This was one captivating tale that I did not want to end. Just the right touch of humor endeared these characters to me even more
—eCataRomance Reviews

5 Steamy Cups of Coffee—
Combining the world of secret government operations with mythical creatures as if they were an everyday thing, she (Ms. Roth) then has the audacity to make you actually believe it and wonder if there could be some truth to it. I know I did. Nora Roberts once told me that there are some people who are good writers and some who are good storytellers, but the best is a combination of both and I believe Ms. Roth is just that. Mandy Roth never fails to surpass herself
—coffeetimeromance

The Suspect's Daughter by Donna Hatch
Where Have All the Boys Gone? by Jenny Colgan
A Regimental Affair by Kate Lace
Hollow (Perfect Little Pieces) by Conway, Ava
Frost & Bothered by Gayla Drummond
Felix Takes the Stage by Kathryn Lasky
Cold Fusion by Harper Fox
A Family and a Fortune by Ivy Compton-Burnett
Our Kansas Home by Deborah Hopkinson, PATRICK FARICY
Hot Wheels and High Heels by Jane Graves