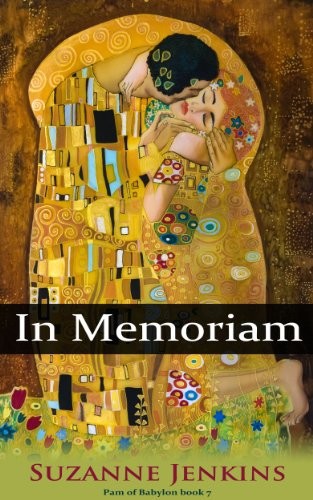 Book #7 in the Pam of Babylon Series

Created in digital format in the United States of America. No part of this book may be used or reproduced in any manner whatsoever without written permission of the author except in the case of brief quotations in blog posts and articles and in reviews.

In Memoriam
is complete and total work of fiction. Names, characters, places and incidents are the products of the author’s imagination or are used fictitiously.

For information on the
Greektown
trilogy, the
Pam of Babylon
series, and other works by author Suzanne Jenkins, please refer to the ‘Also by…’ section at the end of this novel.

Alone in the birthing center waiting area on a Saturday morning, Pam Smith paced, wondering what was taking so long. In a room down the hall, Lisa’s husband and his family crowded around her as she pushed. The family birthing scene was never Pam’s thing, but she was there to show her support in spite of her disgust at the circumstances. If having to navigate the latest fiasco in her life didn’t force her into seclusion, nothing would. Gladys Ford, Lisa’s former mother-in-law, was taking care of Lisa’s baby Megan, one worry Pam didn’t have. As soon as her mother, Nelda Fabian, came out to give the report that Lisa and the baby were okay, Pam was leaving. She shuddered thinking that she might have to see Lisa’s husband, Dan, imagining his horrible sisters aiding in the birth of Lisa’s baby.

Finally, Nelda came out of the birthing room. “Hi, Grandma!” she called brightly. “You will not believe the head of hair on this kid.” She sidled up to Pam, whispering, “It’s the native genes, I think.”

“Don’t kid yourself. Any Italian baby born that hairy would require an exorcism before his christening.”

“I’ll wait until later,” Pam said. “Give Lisa my love. I’m headed back to the beach and will return when Dan and his family go. Can you get a ride with his sister?”

“I don’t think Dan is going anywhere, Pam,” Nelda said gently, worried her daughter might be confused. Dan and Lisa were married now. “And it sounds like Lisa will be discharged later this afternoon.”

Having to go to Lisa’s house with Dan’s family all around would be worse, Pam decided.

“Oh hell, okay,” Pam said, giving up. She steeled herself, preparing for…what?
It’s just pride
, she thought.
It won’t kill me.
Following Nelda down the hall to Lisa’s room, Pam could hear the jovial laughter of Dan and his family interspersed with Lisa’s lilting voice. She sounded happy. Pam didn’t want to be a downer for her, so she plastered a smile on her face. Glancing at her reflection in the glass window at the nurses’ station, she was relieved to see she looked fabulous: youthful, attractive, and self-confident.

Nelda led the way, holding the door for Pam. Lisa was radiant, holding a bundle.

“Mom, meet Marcus Brent!” she said when Pam walked in.

Hearing the middle name seared through Pam’s heart, but she knew before the birth what his name would be, so it wasn’t a shock. Pam mouthed,
Oh, wonderful,
but didn’t think any sound came out. She was afraid to engage her vocal cords, the emotion welling up in her chest overpowering, threatening to take control of what she might say, the self-confidence she was just reassured of slipping away.

Dan’s relatives parted to allow her access to the bedside, and it seemed to Pam that it happened in slow motion. She looked from face to face, and they appeared to be compassionate and hopeful, not cruel and spiteful, as she’d thought. In truth, they felt awful that Pam had recently lost her own son, but smug that her own daughter had put her in her place. They never liked the idea of their brother being involved with the older Pam. Lisa, twenty some years younger than Dan, was the perfect trophy wife.

Carefully making her way through the crowd, she reached the bedside, bending down to kiss Lisa’s cheek. She grasped the edge of the receiving blanket, moving it just enough to see the little
creature’s
face. That word was the first to enter her mind when she saw the top of his head. He had a shock of pitch-black hair that grew from the center of his head like a Chinese wig.

All she could get out was, “Oh!” and Nelda started laughing.

“What’d I say?” she said. The others laughed, too.

“Can you believe his hair?” Lisa said.

Pam stood by her, looking down at the baby. She was grateful the baby didn’t look like Brent or Lisa, although there was something about his mouth that reminded her of her own babies.

“His mouth sort of reminds me of yours,” Pam said softly. Of course, Dan had to pick that up.

“I just said that!” he replied excitedly, looking at Pam.

Pam was not going to acknowledge him, though.
Asshole,
she thought, bringing a hysterical giggle to her throat. Thinking of him in that way put her in a position of authority in her mind so that she wouldn’t cringe every time he said something.

Mother and daughter looked at each other, and Pam could feel her love. Lisa wanted to be alone with her, but Dan’s family surrounded them, and that’s what you did when you were a wife. You relinquished your own desires for your husband’s benefit.

The others began their exodus, bending over the other side of the bed to kiss her good-bye, no one asking Pam to move away. Each of them nodded their heads in her direction and either smiled or said good-bye. She wouldn’t see them again if she could help it. Dan walked out with his family, putting a hand up, saying, “Be right back.”

“Are you going straight home?” Pam asked Lisa, curious if they would bundle her off to the family farmstead.

“Yes,” she said. “Straight home. Gladys is staying with me.”

“I knew you were having problems with Ed,” Gladys told Lisa. “It was human nature to turn to someone who was showing you affection.” Gladys and her husband, Big Ed, would stay in Lisa’s life as much as she would allow in order to be close to their son’s child.

Pam had a slightly different take on the situation because
the someone
Lisa turned to was Pam’s old boyfriend Dan. After having an argument with Pam, he didn’t even wait twenty-four hours to sleep with Lisa. Pam had to forgive Lisa; she was her flesh and blood. But she wasn’t forgiving Dan. His last name was Chua, Hopi Indian for snake. And he’d turned out to be a big, awful snake in Pam’s life.

Gladys was there for Lisa through every step: for Ed’s funeral, Lisa’s marriage to Dan, and afterward, when she discovered she was pregnant. Pam was unable to face Lisa until recently, insulating herself from the Dan and Lisa drama. She could focus on Lisa and Megan if she really tried, and she’d have to acknowledge baby Marcus as well, but that was it. It appeared Lisa was well attended; Pam would be relieved from doing the postnatal caregiving.

“Good,” Pam said. “She said to tell you she’d be over to the house as soon as you were up to having company. She didn’t think she’d be able to tolerate the birth.”

“I understand,” Lisa said. “I can barely tolerate it myself.” The truth was it was impossible to be alone with Lisa. Several of Dan’s relatives were at the house at any given time, seeming to always travel in packs of ten. They didn’t give it a second thought that she might like some privacy or to have the space to entertain her own family members. But no one would address the issue with Lisa until she was on her feet again, if ever.

Nelda was already feeling put out, but Pam’s mother-in-law, Bernice, was livid. “I can’t even spend the night at my granddaughter’s house because it’s overrun with rednecks.”

“Bernice, for God’s sake, shut up!” Pam replied. “You’re talking about her in-laws now.” It wouldn’t be the last of the politically incorrect phrases either grandparent would utter.

“What I meant was Dan’s family, nothing more, nothing less,” she said. Bernice wasn’t known for her tolerance or her couth.

Pulling her thoughts back to the baby in front of her, Pam looked at him again, and it was a relief that Marcus really didn’t look like Lisa, except for that mouth. It would be easier for her to be uninvolved if she wasn’t longing to see her grandson, hoping it would spark memories of his mother’s own babyhood.

“Oh, he’s adorable,” Pam said after grasping the side rail for support.
Would the mention of Brent’s name ever stop jolting?

“And Miranda?” Miranda was Pam’s late sister, Marie’s daughter. Sandra and Tom had custody of her.

“She’s fine, too. I can’t believe she’s going to be three soon. Time is certainly flying by.”

Pam looked down into her eyes. She could feel Lisa’s regret, her sincerity. “I know you are,” she replied softly. “You don’t need to say it again, Lisa. It’s done with.”

“But I wish things could be the way they were before.”

“Well, that will never happen. Nothing will ever be the same,” Pam said, sorry that Lisa appeared to be fighting tears. There wasn’t anything she could do for Lisa, who needed to feel the pain she’d caused. But Pam didn’t want the guilt to harm Lisa’s new baby, either.

Lisa wanted her relationship with her mother to return to where it was two years ago, when she was pregnant with Megan and living at the beach with Pam. She wanted her mother to pamper her again, to let her stay in her childhood bedroom with sea-glass-green walls and starfish mobile, the Judy Blume books in the bookshelf, the mementos of her life before she ruined it.

“I’m sorry to hear that,” Lisa replied. “I guess there is just too much to forgive.”

It was Pam’s turn to grab Lisa’s hand. “It’s not just about you, Lisa. I don’t want to talk about sad topics around baby Marcus.” She was going to say how the loss of Brent changed life irrevocably, but was saved by the return of Dan Chua. Pam immediately thought
yuck
when he walked through the door. How could she ever have found him even remotely attractive? Trying not to put her nose in the air, she bent down and kissed Lisa good-bye and walked toward the door.

“It’s not on your account, Dan. It’s on mine.” She turned to Lisa again. “Good-bye, dear. Call me when you’re settled at home.” Pam quickly shut the door behind her before someone could speak again. The sense of relief leaving the room gave her was immediate.

“Yes. But you could say we brought it on ourselves.” Lisa looked down at her new baby, sad that her actions might cause him pain in the future.

Murder at Longbourn by Tracy Kiely
A Bride Worth Fighting For by Sara Daniel
Dark Waters (Celtic Legacy Book 1) by Mayer, Shannon
Vain by Fisher Amelie
Dogfight by Adam Claasen
If Hitler Comes by Christopher Serpell
Chronospace by Allen Steele
Knee High by the 4th of July by Jess Lourey
Straits of Power by Joe Buff
The End of Diabetes by Joel Fuhrman