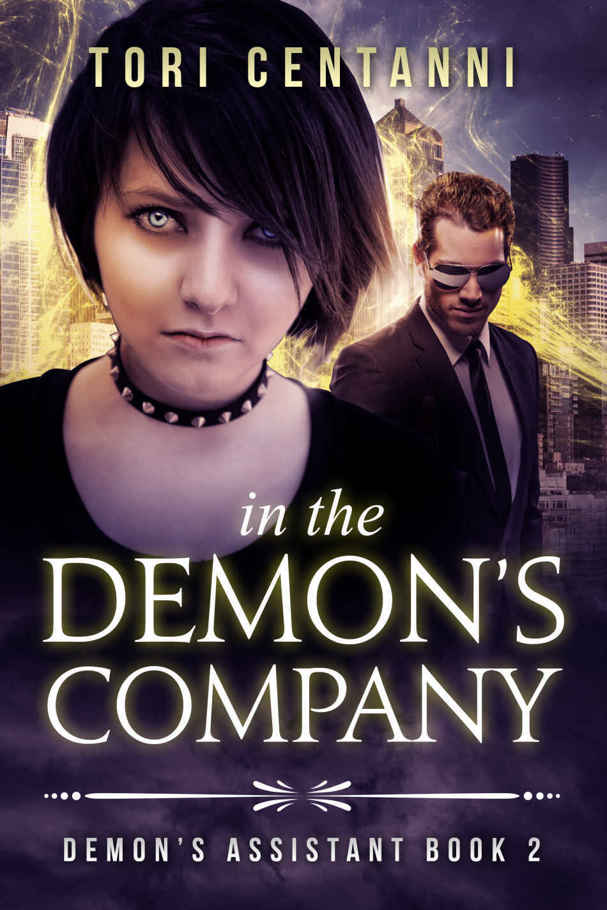 In the Demon’s Company

We’ll never share your email and you can unsubscribe at any time.

the best possible partner in crime

The demon’s warehouse is a nondescript concrete box in SoDo, South of Downtown Seattle, surrounded by similar and equally unremarkable warehouses. In the dark, it looks sort of like a set from a police procedural.

The entrance is a single door with a single light hanging overhead. Above the intercom, a small plaque reads “Elysian Sculpture & Garden Supply. Ring for assistance.”

I slam my fist against the big red intercom button, ignoring the text message chimes emanating from my coat pocket. This isn’t exactly my ideal way to spend Saturday night, either, but it can’t be helped, and no amount of pleading text messages is going to erase my obligation to come when Azmos calls. Working for a demon means no set schedule and I knew that when I signed up.

No one answers and I hit the buzzer again. Azmos hasn’t seen fit to give me a keycard, even though technically I’m an employee.

Moments later, the door opens. Cold air wafts out and there stands Xanan, glaring down at me. He’s a demon, similar to my boss Azmos, although they’re different species or whatever. I’m still figuring out how demons work.

“What do you want?” Xanan’s shaggy black hair is flat on one side like he slept on it and his lip ring catches the streetlight. His blue eyes rake over me and I shiver.

“Azmos asked me to come,” I say, which he has to know. It’s not like I ever show up to have tea. “Did you just wake up?”

Xanan opens the door wider, stepping back to let me inside. He doesn’t answer my question. He locks the door behind me, waves vaguely at the second floor that overhangs the first, and says, “He’s up there,” before trotting off into the shadows.

The main floor of the warehouse is covered in statues and garden sculptures in different colors and sizes. I navigate through a forest of stone angels, marble dolphins, and clay gargoyles, all meticulously sculpted. Price tags dangle from their wrists and tails, and they are not cheap. Off to the side is a work room with giant windows, through which I see half a mermaid jutting out of a block of red marble, a table of sculpting tools behind her.

I head up the metal stairs to the second floor. A metal walkway leads to three offices that look out over the sea of statues, and to the right is a door with another keycard reader. I’ve surmised it’s where Xanan and Azmos live although neither one will verify this is true, like they’re afraid I’m going to suggest a sleepover or something.

I turn left and knock on the door to Azmos’ office, even though I see him inside through the glass, sitting at his giant, pristine wooden desk. His hands are folded, like he’s been sitting there waiting for a while even though he only called me twenty minutes ago and I made it here in near-record time. He’s wearing business clothes: a collared gray shirt and black jacket. With his spiky red hair, he looks like some young professional who embraces the dress code but keeps his funky hairstyle. The faintest hint of gold pokes out from his sleeves. Most people would guess he wore a watch, but I know there are small golden marks in his skin that look vaguely like lizard scales. He also wears his sunglasses, which cover his snake-like eyes.

I sit down in one of the black faux-leather chairs in front of his desk. My phone chimes for the tenth time and I reach into my bag to turn off the ringer.

“Is it another invoice delivery?” I say. “Because they have this thing called the post office. It’s pretty nifty.” Azmos raises one eyebrow over the black rim of his glasses. “Or you could even start sending the invoice with the delivery drivers.” Azmos has been sending me out to deliver invoices to people who’ve purchased sculptures and fountains, which is not exactly what I signed up for when I asked the demon to give me a job.

“We charge for installation and delivery. Invoices get prepared after the fact,” Azmos says seamlessly, pulling another manila envelope out of his desk. This one is fat and lumpy unlike the invoices, which are usually flat.

“Az, come on. I’ve been your assistant for weeks and you’ve yet to send me on an errand you couldn’t hire a paperboy for.”

“I was under the impression paperboys didn’t really exist anymore.”

“Beside the point,” I grumble.

Azmos slides the envelope over to me. “As it so happens, this evening I need you to run an errand than involves my other business.”

I sit up straighter. “Being a demon?”

His smile is tight. “There’s a young man named Gabriel Price who assists me from time to time.” Before I can ask how many assistants Azmos has, he holds up a hand. He wears silver rings on nearly every finger. “He has a special ability I utilize. There’s cash in there for both of you. Go.”

“No doubt Mr. Price will be more than happy to explain it himself,” Az says. He opens the razor thin laptop on his desk. This is my cue to leave. I don’t. Azmos pushes up his sunglasses. His golden green snake eyes meet mine. “Is there a problem, Nicolette?”

I hesitate, but then I remember the past three weeks’ worth of mundane errands and decide to come out with it. “When do I get promoted up from errand girl?” I ask.

Azmos looks surprised. “Would you prefer coffee runner? Xanan can drink a lot of iced lattes.”

I stare at him, unaccustomed to him making jokes and unsure how to react. “I just mean, I wanted to work for you so I could learn more about magic and demons. And instead, I’m handing out bills for gaudy lawn ornaments.”

“They may not be to your taste, but they’re not gaudy,” Azmos says, dropping his sunglasses back over his eyes. He leans over the desk and conspiratorially whispers, “And don’t let Xanan hear you say that. He’s quite proud of his art.”

“He makes the sculptures?”

“Holy crap.” It’s nearly impossible to picture Xanan patiently working stone to make meticulous statues of animals and mythical creatures. Then again, he does sort of seem like a walking statue himself. I shake my head. “But seriously, shouldn’t I be learning magic or something?”

“What do you mean?” I ask. It seems to me that using magic would be worth any cost.

“The energy it takes to perform a spell usually negates the benefit.” It’s easy for him to say that, but he’s not walking around powerless against whatever other supernatural forces are out there.

“Heather’s magic seemed pretty effective against you,” I point out.

Azmos winces. A small pang of guilt travels through my gut. I hadn’t meant to phrase it quite so callously.

“Power that strong is rare,” he says. “I have no expertise in human magic but from my understanding, it’s often a worthless pursuit.”

“How do you know that if you’re not an expert?”

“As I said, it’s my understanding from speaking with others.”

“What about your magic?” I ask. Azmos gives me a tired expression that reminds me of a substitute teacher who really wanted to put a movie on and call it a day but is forced to lecture on a subject they don’t understand and keeps getting corrected by an obnoxious student in the first row.

“My magic is unique to my species, the Vitas. It cannot be taught.”

Frustrated, I start to ask about other demonic magic. Not that I want Xanan’s power, whatever it actually entails besides the ability to turn any room into a walk-in freezer by standing in it. But there has to be some kind of magic I can learn. “What about —”

Azmos holds up a hand and I close my mouth. “There is very little demon magic that a human can learn while remaining human.”

The hair on the back of my neck stands up. That sounds ominous, even for a demon, but his phone rings before I can ask anything else.

“Gabriel will be waiting for you,” Azmos says, before picking up the receiver.

“Yeah, yeah,” I stand, shove the envelope into my bag, and head back through the statue forest. It’s only when the door to the warehouse clicks shut behind me that I realize Azmos totally avoided answering my question.

Outside, I zip up my coat to guard against the December chill and then pull out the envelope and my phone. I glance at the six text messages from Cam. They say exactly what I expected them to: that he wants me to come to Amy’s party, demon business be damned (knowing Cam, pun probably intended). I close the window without replying, ignoring the pang of guilt that worms through me, and open my map application.

I type in the address on the envelope. It’s a coffee shop and it’s blessedly not far from here. If it doesn’t take long, I’ll be able to make it to Amy’s party after all. Given how infrequently I’ve been able to spend time with my boyfriend lately, I’d actually like to be there playing card games with his friends while they all get drunk. I pause to send Cam a text saying I’ll do my best to make it and then head toward Pioneer Square to find this Gabriel person.

The Withdrawing Room by Charlotte MacLeod
Diane R. Jewkes by The Heart You Own
New Regime by Laken Cane
Undead Fleshcrave: The Zombie Trigger by Goforth, Jim
Norton, Andre - Anthology by Catfantastic IV (v1.0)
Tram 83 by Fiston Mwanza Mujila
Born to Bite by Lynsay Sands
Death of an Alchemist by Mary Lawrence
The Sigh of Haruhi Suzumiya by Nagaru Tanigawa
Trust Me by Brenda Novak