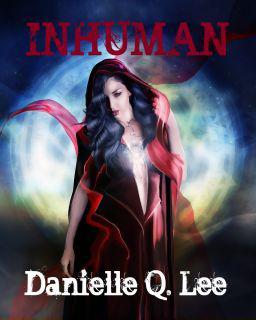 This is a work of fiction. Names, characters, places and incidents either are the product of the author’s imagination or are used fictitiously. And any resemblance to actual persons, living, dead (or in any other form), business establishments, events, or locales is entirely coincidental.

All rights reserved. No part of this book may be reproduced or transmitted in any form or by any means without written permission of the author.

Dedicated to my sweet husband and best friend,

Thank you to Philean Gladue and Crystal Hall for being my loyal editors and beta readers. Thank you to my husband for his patience and constant support with my dreams. Thank you to all my friends, fans, and cheerleaders who make me smile every single day.

Thank you for purchasing Inhuman.

This book was born from a strange phobia I endured as a result of two separate surgeries. Previous to each surgery, I experienced an odd fear that, for some reason, the surgical staff would cut me open and discover that I was not human. For years afterwards, I continued to wonder what would happen if that were to occur. How would society treat a person with such an abnormality? Would they still be considered human? And most importantly, would they maintain their human rights?

This book is not a traditionally written novel. It is meant to be treated as a memoir that follows a short time in the life of the main character who discovers by accident she is, by society’s standards, not human.

A cool breeze nipped at her hands as she struck the match. Cradling the glow within her palm, she held it close to the kindling. Wind snaked around her, hungrily stalking the flame, as though awaiting the perfect moment to smother it.

“Start boiling the water.” Hunched near the rising blaze, the medicine woman ordered the handmaiden in her native tongue. Pursed in deep concentration, her skin wore the weather of time and the wrinkles of wisdom. Turning to the woman ripe with child, the old doula hushed her as she gently set fresh blankets over her legs. Dabbing the beads of sweat from the mother’s forehead with a cool cloth, she hummed an ancient Hopi lullaby.

The sounds of labor reverberated off the walls of the cave as the mother clutched her swollen belly, barely enduring the waves of agony that gripped her womb.

As the fire grew, flickers of light haunted the walls while tendrils of smoke crept from the mouth of the cave, weaving their way into the pitch of the night.

Releasing an anguished howl as a powerful contraction seized her; the mother sat up and began to push.

“Calm, child, you must be calm.” The medicine woman’s voice soothed as she gently coaxed the woman to lie back.

Pushing damp hair from her face, the medicine woman then unbuttoned the mother’s shirt in preparation for the baby. Customary to lay the baby next to the mother’s breast immediately after birth, she cleansed the area with a wet rag.

As droplets of water shimmered and ran between the mother’s breasts, the medicine woman was captivated with her patient’s unique birthmark. A perfect six-sided white star dwelt within the hollow of her bosom.

Ancient Hopi lore had spun prophecy of a day like this and what it could mean for the human race.

Relinquishing an agonized scream, the mother grunted as instinct overwhelmed her body. The medicine woman signaled for the handmaid’s assistance.

“It is time.” She uttered as she removed the blankets from the mother’s legs to expose the child’s crowning head.

Matted black hair mingled with blood emerged from within the mother. Working feverishly, the medicine woman eased the baby out and brought it into the air for the first time.

Breathless and exhausted, the mother smiled as her eyes beheld her newborn for the first time. Arms extended, she wept tears of joy and asked for her baby.

In the medicine woman’s quaking arms, however, there was silence and stillness. The sweet breath of life had eluded this infant. Her lip quivering, she slowly handed the tiny body to her mother.

The mother never faltered as she placed the baby on her naked chest. A confused frown eclipsed the old woman’s face as she watched the scene unfold.

The child lay unmoving upon her mother’s breast; the miracle of life had overlooked this infant, yet an unwavering expression of bliss remained on the mother’s face.

Holding her baby close to her, the woman’s chest suddenly began to glow white. From between her bosom—from the star birthmark—a source of power resonated.

Eyes widening as they witnessed the pulsating light emerge from the mother’s chest, the medicine woman and handmaiden clutched one another and fell to their knees in prayer.

Snaking slowly through the air, a cord of white light wove itself in the space above the mother and child. Writhing gracefully, it gently coiled around the tiny, lifeless child. With one swift movement, the illuminated thread disappeared into the child’s chest, giving the baby its first kiss of life.

A loud cry from the baby’s lips elicited fresh tears to flow from the old doula’s eyes. Rushing to their side, the medicine woman covered the baby with a warm blanket.

Turning to congratulate the mother, the medicine woman watched as the mother’s eyes slowly faded to dark. Her blood stilling beneath her skin, the mother’s hands fell from the loving embrace.

“She is…dead.” Shock overwhelmed the elderly woman as she lifted the child from her mother’s dead body and cradled her in her own arms.

The child cooed like a baby dove as she stared with innocent eyes at the old woman. Placing the infant on a bundle of blankets, the medicine woman inspected the child.

Her hand flying to her mouth with a loud gasp, she pointed to the baby. The handmaiden ran to her mentor’s side, a cry of surprise escaped her lips as she laid eyes upon the infant.

Inherited in the center of the child’s chest was a birthmark—a white star.

“You’re just going to feel a little pinch. It won’t hurt a bit.” The young nurse-in-training warned as the steel tip of the needle disappeared through the skin and into my arm. I might have been more inclined to believe her if her hands weren’t shaking so much.

“You have really pretty eyes.” She commented as she removed the needle and tried again to plunge the syringe into my swelling vein. “I’ve never really seen that color before, what would you say that is? Hazel?”

I looked away as the needle burrowed deeper into my arm. Diverting my attention to an anatomically correct poster of the male body, I tried not to think about the blood draining from my arm and being deposited into several plastic vials.

“Amber. Kind of like cat’s eyes, so I’ve been told.” I winced as she released the tourniquet with a snap; an uncomfortable thudding sensation overwhelmed my entire arm as the blood fought to disperse itself evenly throughout the limb.

“There, all done.” The smile on her face was one of pure pride that she’d accomplished the task at hand without permanently damaging me in any way. Placing a cotton ball and piece of tape over the fresh hole in my arm, she then inquired. “Would you like some juice or a cookie? It helps to eat or drink something afterwards. Some people get a little dizzy after getting their blood taken.”

“I can’t believe this is your first time ever getting blood drawn. How old are you?” She asked as she labeled each of the six vials she’d just filled. Thick crimson liquid sloshed against the sides of the glass tube. It felt strange to be looking at something that was inside of me just moments before.

“Wow! Are you sure you’ve never gone to the doctor before?” Her expression was of amazement as she turned to me, felt marker in one hand and a vial in the other.

“Pretty sure.” There’d never been any need; really, I’d never been sick. Besides that, the reservation I grew up on didn’t have modern hospital equipment.

Tucking the six vials safely into a plastic container and sealing it shut, she turned to me and stated triumphantly. “There, all done. On to the next.”

Leading me out of the cubicle, she then pointed down the hall. “Just follow the yellow arrows and look for a sign that says x-rays. Okay?”

Nodding, I began walking down the sterile hall. My nostrils burned a little from the overwhelming scent of bleach.

At least it’s clean.
I thought as I searched the walls for some visual stimulation.

There were several plaques lined up on the wall to the right of me, all dedicated to those who had generously donated large sums of money to Stanley University.

Following the yellow arrows, I could see a sign up ahead that appeared to say x-ray and a big black arrow pointing left.

At least this one shouldn’t hurt.
I decided after the last test that I didn’t like getting my blood taken.

I approached a large desk with a student technician seated behind it. A bright smile upon his face, he inquired. “Are you a test subject?”

“Yes.” I nodded and returned a polite smile.

“Great! Just have a seat over there and we’ll get to you as soon as we can.” He said enthusiastically. “Would you like a coffee or orange juice?” He tilted his head as he asked.

“Okay, just let me know if you need anything.”

Sighing, I reached to my right to find something to read. After sorting through a few, I finally settled on a gossip magazine.

I scanned the pages half-heartedly, pausing to inspect the dresses worn by celebrities who’d recently attended an awards party. A few photographs made me shake my head.

Too skinny! These darn models and actresses, they don’t set a very good example.

Scouring the pages of the magazine, I read through the recent marriages, births, deaths and affairs of the rich and famous. Shaking my head often, I realized with a twinge of guilt that by merely reading this stuff, I was contributing to the source of the problem.

“Miss Tiponi?” A male voice startled me out of my thoughts. Glancing up from the trashy magazine, I was met with yet another warm pair of eyes.

“Are you ready?” The young technician asked politely.

“Sure.” Placing the magazine back on the pile, I paused for moment as I considered tossing it into the wastebasket. I weighed the pros and cons and decided that it was simply wasting precious paper if I were to throw it away, even if it did have garbage written all over it.

Seating me in yet another cubicle in a back room, the young man set a clipboard down and pulled a pen from the breast pocket of his lab coat.

“How do you spell that?” His face was pleasantly inquisitive as he looked up from the paper.

“That’s different. Is that Greek?” Considering my olive skin, I often received that assumption.

“No, it’s Hopi Indian.” I replied with a smile.

“Oh.” His response was quick as he returned to his questionnaire.

Glancing up at me with a glint in his eye, he stated the obvious.

I hated that question. Confused by my hesitation, the guy looked up.