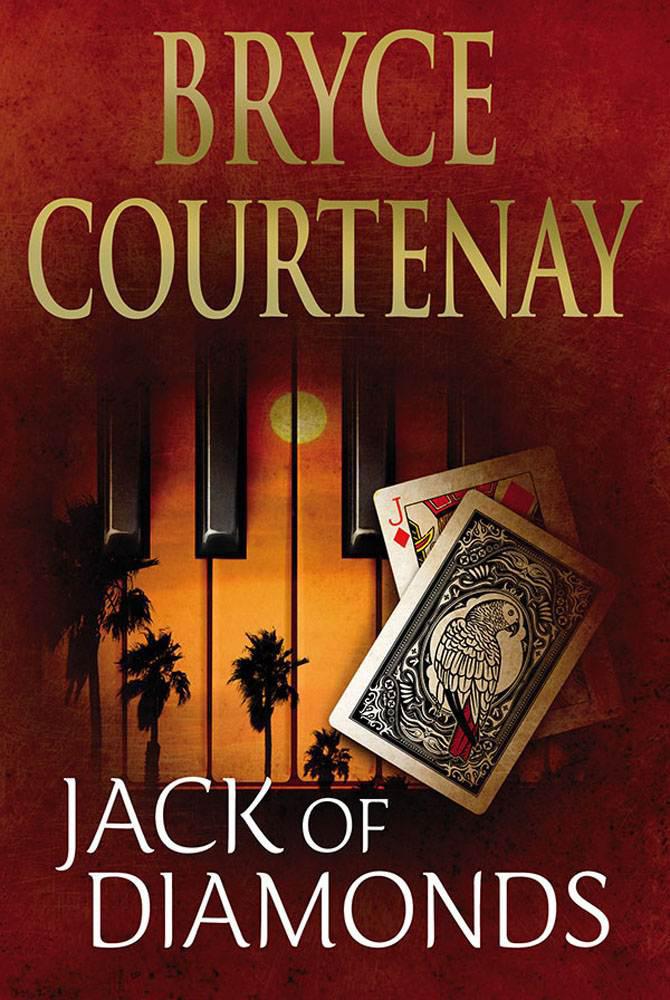 Set across three continents, Jack of Diamonds is a spellbinding story of chance, music, corruption and love. During the Great Depression there was little hope for a boy born into the slums of Cabbagetown, Toronto. But Jack Spayd is offered a ticket out in the form of a Hohner harmonica, won by his brutal drunken father in a late-night card game. Jack makes music as a way of escaping his surroundings, and his talent leads him to a jazz club and, eventually, to the jazz piano. Jack is a virtuoso and hits the road, enchanting audiences in Canada, wartime Europe and Las Vegas, where he is caught up in the world of elite poker and falls under the spell of his boss, the enigmatic Bridgett Fuller. Vegas is a hard town ruled by the Mafia, but Jack prospers, until his luck turns bad and he falls foul of the Mob. Forced to run for his life from Vegas, he must also leave the woman he adores. His adventuring takes him to the far reaches of Africa, to a rare and valuable bird that may seal his fate – and to the love of a very different woman. Bryce Courtenay writes in a moving Epilogue that Jack of Diamonds will be his last novel. If poker was an addiction then music was an overwhelming obsession; one could never replace the other in my life.

Bryce Courtenay is the bestselling author of The Power of One, Tandia, April Fool's Day, The Potato Factory, Tommo & Hawk, Solomon's Song, Jessica, A Recipe for Dreaming, The Family Frying Pan, The Night Country, Smoky Joe's Cafe, Four Fires, Matthew Flinders' Cat, Brother Fish, Whitethorn, Sylvia, The Persimmon Tree, Fishing for Stars, The Story of Danny Dunn and Fortune Cookie. The Power of One is also available in an edition for younger readers, and Jessica has been made into an award-winning television miniseries. Bryce Courtenay lives in Canberra. Visit Bryce on Facebook: facebook.com/BryceCourtenay 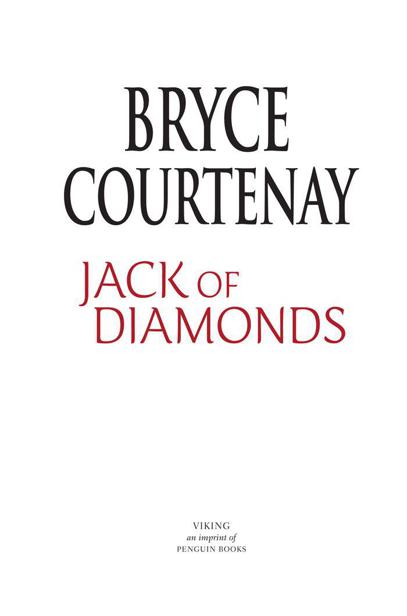 The Power of One
is also available in an edition for younger readers, and
Jessica
has been made into an award-winning television miniseries.

Further information about the author can be found at
brycecourtenay.com 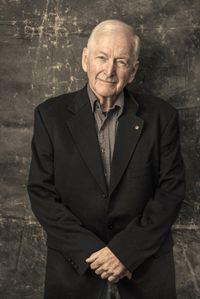 For
Dr Koroush S. Haghighi,
with my gratitude and thanks

HARRY SPAYD WAS A
drunk. He was also my father, but the only thing he contributed to my childhood was a sense of unremitting terror. As fathers go, Harry was by no means unique. In the part of Toronto where I was raised in the 1930s, normal, happy, socially well-adjusted children were non-existent, which meant I was lucky. When every kid is in much the same boat, there is no such thing as a dysfunctional family or even poverty, just life.

We were different in one respect: my mom, Gertrude, had the rare good fortune to have a regular job as an office cleaner across town. It was a small miracle, really. She would get home just after ten at night, always walking the last streetcar stop to save on her fare. She had bad circulation in her feet and in the winter suffered from chilblains.

Treating her chilblains was my first contribution to the welfare of our family, and the nightly ritual gave me a great sense of importance and pride – I was the man of the house, looking after Mom, just as her small salary kept the wolf from the door.

The treatment required careful planning and precise attention to detail. I’d place a big tin pail on the kitchen floor with a chair beside it and another chair beside the stove. Then, anticipating her return from work, I’d fire up the stove with coke and, as soon as it was burning properly, I’d fill the big black cast-iron kettle and lug it over to the chair beside the stove. There was just enough space on either side of the seat for my feet. I’d hop up and heave the kettle onto the stove to boil. I don’t suppose the kettle was that big, but to a six-year-old boy it seemed a veritable giant. My mother had inherited it from my grandfather, who had got it from his father, who was a real Iroquois Red Indian. I always imagined it must have been used on an open campfire, it being so black. Such a large heavy kettle filled with boiling water is very dangerous. I’d lift it from the stove using both hands, and place it ever so carefully on the chair between my legs, with the spout pointed to the front. Then I’d jump down, tilt the kettle and pour the boiling water into the pail. Later, when I was eight and had grown a bit, I didn’t need the chair any more.

I’d always leave a little water in the bottom of the kettle to return to the stove the moment I heard Mom coming through the front door. It would only take a minute or so to boil, and I’d have the teapot ready with tealeaves in it.

Next I’d fill a white enamel jug with cold water and place it beside the steaming chilblain pail so we could mix it to the right temperature. Then I’d add coarse salt and a tablespoon of cayenne pepper to the pail. This was almost as risky – if you got even the tiniest bit on your hands and later rubbed your eyes, kapow! You were temporarily blinded. Even after you’d washed your eyes at the tap, they stayed red and burning for ages and ages. But the cayenne wasn’t all. There was one more special ingredient. I’d unbutton my fly and piss into the pail. My mother explained that it was an old but trusted recipe for fixing chilblains that she got from her mother and also her grandmother; cayenne pepper, urine and coarse salt did the trick every time. I have to say that the pissing part sounds pretty disgusting now, but at the time I accepted her instructions and it simply became a part of my nightly routine.

When I heard her key rattle in the front door, I’d put the kettle on and meet her at the door. ‘Hello, Jack,’ she’d say, her lips so blue and trembling from the cold she could hardly get the words out.

I’d help her take off her overcoat, and she’d sit down on the kitchen chair with an exhausted sigh. With my precision timing, the kettle would be boiling and I’d make the pot of tea and leave it to steep to the strength she liked, then I’d remove her battered snow boots and her three pairs of socks. Finally, I’d add the water from the jug to cool the pail sufficiently so she could sink her near-frozen feet into it.

She’d start ouching as her feet thawed, until she grew accustomed to the temperature. I was pretty careful and she never ever got scalded. Chilblains affect your fingers as well as your toes, but she wore these big woollen-lined gloves my dad had for his job in winter (he must have got a second pair somewhere) and never got them on her hands.

It was then time to pour her a mug of tea, hot, strong, black and heavily sugared. The mug, one of two royal mugs we possessed, had a picture of King George V on one side and the royal coat of arms on the other, with the legend ‘God Save the King’ around the base. The second had a picture of Queen Mary and the coat of arms but no legend. Cabbagetown people were almost exclusively of English, Scottish or northern Irish stock. All were obsessively loyal to the Crown and referred to King George as the King of Canada. Mom always preferred the slightly larger King George, as it was about three mouthfuls bigger than the more ladylike Queen Mary and also served to warm her hands more effectively. She always drank two mugs of tea in the time it took for the water to cool in the pail.

It was while she sat and soaked that I performed my next task. She’d undo her bun to allow her hair to tumble almost to her waist. It was thick and black, and I’d brush it and watch the silvered light run across the strands as the brush worked through her hair. ‘Jack, what would I do without you?’ she’d sigh.

‘You could have had a girl and she wouldn’t make you go “ouch”! Girls are better at hair than boys. They’re always braiding and tying and messing around with each other’s hair at school. Hair is definitely a girl thing.’

‘I prefer you, Jack. A girl couldn’t do the chilblain concoction or even lift Grandpa’s kettle.’

The Naked Prince by Sally MacKenzie
Be Nobody by Lama Marut
Double-Barrel by Nicolas Freeling
Temptation, The Complete Serial Series 1-4 (The Temptation Serial Series) by Casey L. Bond
Hunting in the Shadows (American Praetorians) by Peter Nealen
Sherlock Holmes: The Coils of Time & Other Stories (Sherlock Holmes Adventures Book 1) by Ralph Vaughan
Vanishing Act by Barbara Block
Salt River by James Sallis
Under Starry Skies by Judy Ann Davis
What the Heart Knows by Colt, Shyla