Read KATE GOSSELIN: HOW SHE FOOLED THE WORLD - THE RISE AND FALL OF A REALITY TV QUEEN Online

KATE GOSSELIN: HOW SHE FOOLED THE WORLD - THE RISE AND FALL OF A REALITY TV QUEEN

BOOK: KATE GOSSELIN: HOW SHE FOOLED THE WORLD - THE RISE AND FALL OF A REALITY TV QUEEN
>>DOWNLOAD HERE >>READ ONLINE NOW
ads 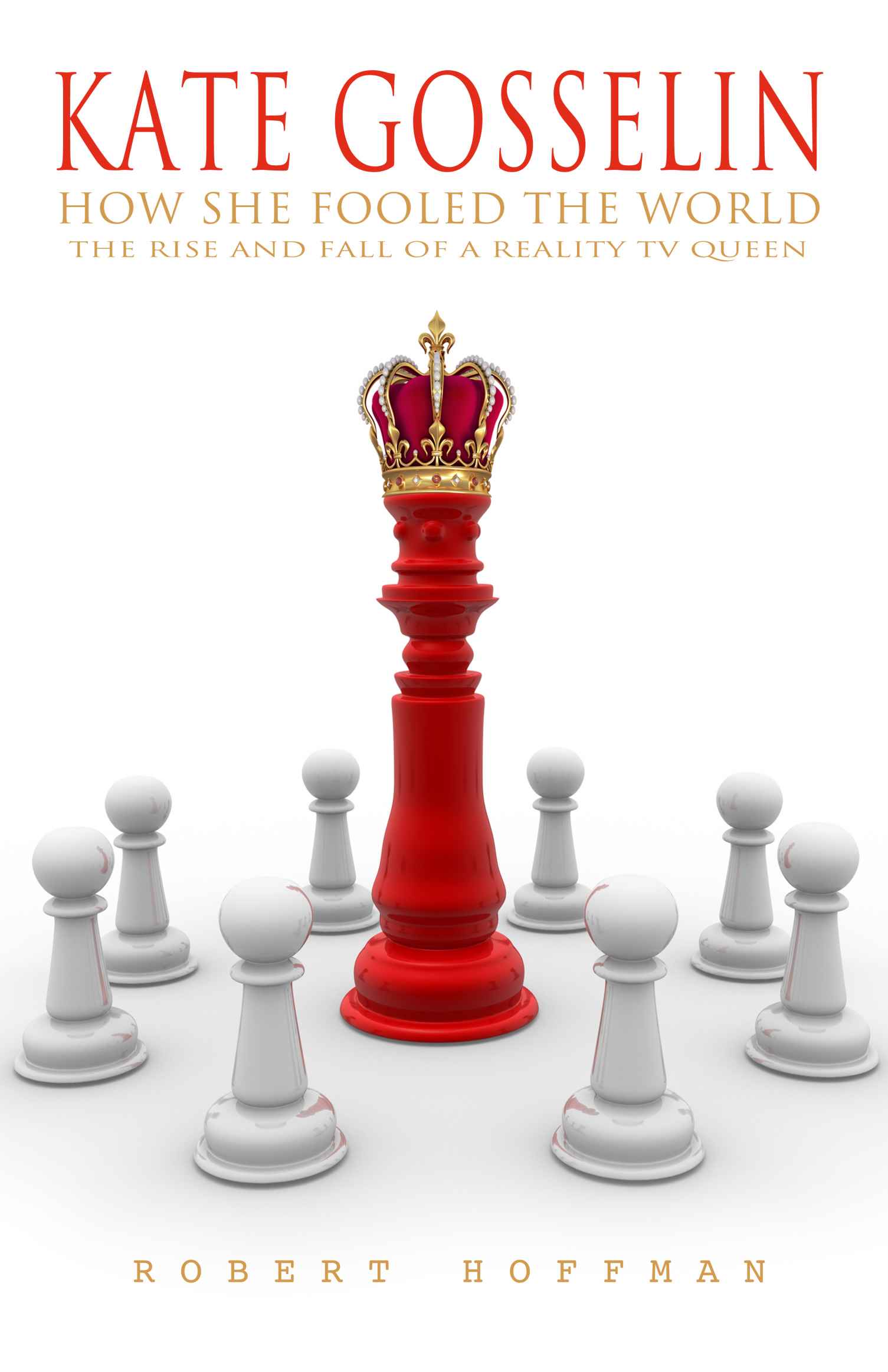 HOW SHE FOOLED THE WORLD

The Rise And Fall
Of A Reality TV Queen

All rights reserved 2014. No part of this work covered by copyright

hereon may be reproduced or used in any form or by any means – graphic,

Web distribution or information storage and retrieval systems – without

the written permission of the author.

Remember that, no matter what, you will always have each other.

Stay close to one another. There is nothing more important than family.

“Children are the magic dreams that we all once were,
filling the air with laughter and sunshine.

Carefree, beautiful little gifts from God,
children are our students, yet they teach us so much.

Through the eyes of children we see life as a path of adventure,
with caves to explore, secrets to keep,
and a lifetime of experiences just waiting to be discovered.”

“…And I wish I could remember what we ate,
and what we talked about, and how they sounded,
and how they looked when they slept that night.

I wish I had not been in such a hurry to get on to the next thing:
dinner, bath, book, bed. I wish I had treasured the doing a little more,
and the getting it done a little less.”

ONCE UPON A TIME …

A FAMILY UNDER (DISCOVERY’S) CONTROL

THE WORLD ACCORDING TO KATE

THE WORLD ACCORDING TO KATE – PART 2

I WANT MY FAKE TV

I DREAMED A DREAM

THE LIES AND TIMES OF KATE GOSSELIN

IN STEVE WE TRUST

WHO LET THE DOGS OUT?

DANCING WITH THE STARS . . . AND KATE

HOLIDAYS, STAYCATION AND CRUISE, OH MY

THE REBRANDING OF KATE GOSSELIN

HELL ON WHEELS: THE END OF AN “ERROR”

WARNING:
For those of you who love Kate Gosselin and support her unconditionally, and think that every bad thing ever said or written about her is a lie, then this book probably isn’t for you.

“Do not judge, or you too will be judged.

For in the same way you judge others, you will be judged,

and with the measure you use, it will be measured to you.”

That passage is for me.
I am a “Gosselin Insider.” My intention in writing this “book,” for lack of a better word, was not to judge Kate Gosselin, but rather to present information that I learned in the past several years that might hopefully, somehow, help eight of the most beautiful children I have ever met.

I’m not a professional writer
, obviously, and I have no ambitions of becoming a writer or anything of the kind. I’m just a mediocre guy from small-town Pennsylvania; a simple father of three. My involvement in this story and in the lives of the Gosselins happened by chance, and perhaps by fate.

This book is an unpolished look at the real Kate Gosselin; a collection of my
observations, experiences and findings. It’s a little bit rough around the edges, and I like it that way. I’d rather you read my exact thoughts and not the thoughts of high-priced editors who altered the text according to their own line of thinking.

I started writing this book while working professionally covering Jon and Kate, but then ended the project all together when the massive story died down. I had mistakenly thought that the exploitation of the Gosselin children would end once they were no longer being forced to film a television show for
the world’s entertainment. I was wrong.

This story started for me in the summer of 2009. I had lost one of my two full-time jobs and was working from home as an
art director for two record companies, one of my two careers for the past 15 years. Money was very tight for my wife and me, as it was for many people. With the economy tanking, and with three small children of our own, I was getting desperate for work.

I was in my home office one morning when my phone rang. It was my wife
, Dana, calling from her office at the
Reading Eagle
, the local newspaper where I had also once worked for 21 years as a graphic designer and web designer. Dana told me she had just gotten a call and that she might have some freelance work for me if I was interested. Before she even finished her sentence I said, “I’ll take it! I don’t care what it is. We need the money!”

Dana’s phone call was from
U
S
Weekly
, and they were looking for someone local to cover the Jon and Kate Gosselin story. They had contacted Dana because she was the first person on record to publicly question Kate Gosselin’s parenting methods, and to write about Kate and the Gosselin saga, before it even was. Several years ago, Dana had a very successful online blog on the paper’s website, and one of the hot topics for her at the time, and that generated the most heated discussion, was Kate Gosselin, back before she was a household name.

Dana had to pass on the
U
S
Weekly
offer because she worked at the paper and wouldn’t be available for the full-time reporting that
U
S
Weekly
was looking for. She recommended me for the job, and after a single phone call and a couple of emails I started reporting for
U
S
Weekly
the next day. The job was only supposed to last a week or two, and I thought it would be fun.

I knew Jon and Kate lived nearby
, about 10 minutes away, but I had no idea exactly where. I had never happened across either of them in town, even though I’m a regular at many of the stores that Kate frequents, and I shop at the same grocery store as Kate.

I had
never seen their reality TV show, primarily because we didn’t have cable in our house – for the sake of our own children – and I had never so much as picked up a tabloid to read. Really. I certainly don’t consider myself to be above that sort of thing, I just really don’t care about other people’s problems since I have enough of my own.

I had heard all of the negative comments about Kate Gosselin from Dana and her fellow bloggers years before, but I went into this job completely open
minded, unbiased and with no real pre-conceived ideas about Jon or Kate. I certainly had no intention of judging either of them. Being a flawed person myself, I’m the last person to judge anyone. My job for
U
S
Weekly
was simply to report what I saw.

As
the father of three beautiful children, whom my world revolves around, I went into my assignment with a parent’s perspective, and I paid very close attention to the kids – how they behaved and how they were treated.

T
hrongs of media and paparazzi had already been stalking this family for two months before I arrived at the Gosselin home on Heffner Road in Lower Heidelberg Township, PA. Up until then, they had basically resigned themselves to staring at the house from behind a fence a football field away, looking at the family through long lenses and following them on their everyday travels.

As a tabloid reporter
, I was paid to be at the Gosselin house every day, taking notes on EVERYTHING I saw and heard, no matter how minor, right down to what Kate was wearing and what she bought at the grocery store. Each night I would type up my notes and email them to my editor at the magazine. Those notes were kept on file for the next week’s magazine, for possible use in a story
.

“What did Kate buy at the grocery store?” was a very big story back then for the person who
had worked the local Gosselin beat for
U
S
Weekly
before me.

That all changed in a New York minute.

When I got to the Gosselin house that first day, Jon had, just two days prior, hired a “management team” from New York City and was starting to take control of his own image. If only he could go back and have a do-over on that decision. That was the real beginning of the end for him.

Jon’s new philosophy worked in my favor for longevity on the job though
, because now he was talking more to people at the house, and an hour into my first day at the fence I was face to face with him having a one-on-one conversation. Jon and I clicked instantly, I think, because I was local; I was a father of three kids the same ages as his, who were going to the same school as he did when he was younger; and I had been through a failed marriage of my own. At first, we just talked about nothing. He could see that I really didn’t care about who he was and what his problems were and that I was just there doing a job to support my family.

I like Jon Gosselin
- a lot. He’s my friend. I like Jon Gosselin’s family as well. Hanging out with Jon is like hanging out with any of your friends. It’s relaxed and usually uneventful, and we both like it that way. Except for time spent with my children, I lead a very boring life, and I have fun when I’m with Jon. I’ve traveled with him and partied with him and have been with him through his highest highs and his lowest lows. Jon is a regular guy who has gotten himself into a very bad situation. He tasted fame for a few minutes and it got the best of him. Like most people, Jon is flawed.