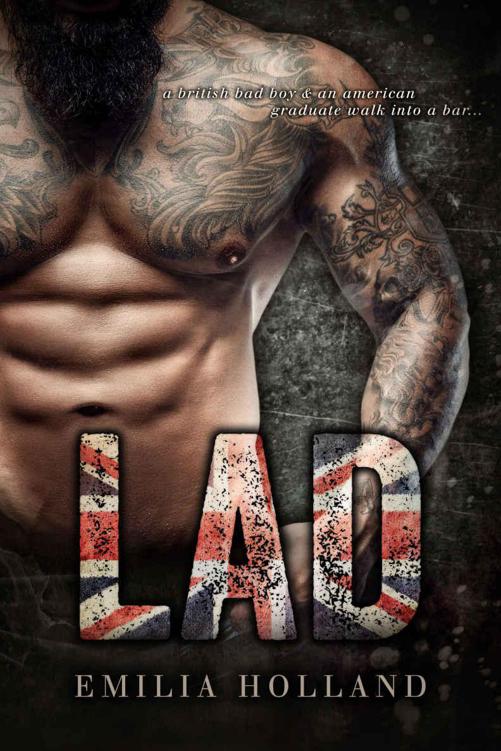 If the image doesn’t work, feel free to
sign up here
.

“Ladies and gentlemen, we thank you for choosing to fly with us today. We trust you had a comfortable journey and wish you a pleasant stay in London.”

“Oh my God,” I whispered. My heart surged. Tears tickled at the back of my throat.

I dug my fingernails in tight to Kristen’s knee until she winced and slapped me off. “Dude, ouch.”

“Are…Are you seriously crying right now?” she asked. “You’ve waited for this moment for how long now and you’re crying?”

“Sorry, but they’re happy tears,” I replied and grinned out the window of the plane. “Like, we’re here. We’re actually here.”

I had finally arrived and done so in two ways:

I had literally arrived because the long, hell-world that of our four-hour delayed, turbulent 14-hour flight had finally made it to Heathrow Airport.

I had also
A-R-R-I-V-E-D
arrived— The kind of long overdue arrival that made me dramatically gesture my arms outwards with a slack-jawed grin on my face as we exited out from the baggage claim. In return, I received some funny looks from locals, but nothing would dampen my spirits. Let them think me a crazy Yank! I was fearless here. A new Hayley. Not even the rain pouring down outside could bring me down.

You see, touching down on that dark, glistening tarmac and walking into that arrivals hall stood for something bigger than myself. It was the fulfillment of a promise to young me of better things to come; A promise that there was a bigger world out there that would accept me, bigger than Ventura, California, bigger than UC San Diego. I promised young me that I’d do everything in my power to make this moment a reality. The screeching skid of the plane’s tires on that runway carried with it a weight of finally’s and I actually can’t fucking believe it’s— More than I would assume for most other people arriving here. I had planned and fantasized about this trip for eight years of my life. That may not sound like a long time but considering I’d recently turned twenty-one, it had been a good percentage of my time on Earth.

And it wasn’t only me who had been romanticizing this moment since high school and through college, either. My best friends, Kristen, and Ako, shared the dream along with me. Our lives were intended to change with this trip. They were as much a part of this unbelievable scenario as the city of London itself. Besties since the beginning, we then carried on our bond during our eight seemingly-endless semesters at UC San Diego. The only thing that got me through that time— what, with the countless exams, harsh breakups, finals, and term papers— were those two amazing women and the hope of our future trip to London.

“This doesn’t feel real. Like, babe, we’re in London.” Kristen’s over-filled backpack slung heavy on her shoulder. “What if we hate it, though?” She looked to me seriously for a moment then we burst out laughing. Her dark, hand-me-down style and cat-eyed liner were a much better fit for London than for California, I could already tell.

“Damn, I gotta find a bathroom, you guys,” Ako whined. Her usually vibrant porcelain skin and well-groomed exterior were a little worse for wear after the flight, like she’d been locked in a dark closet for a few days without sleep. Turns out she didn’t take well to flying. “Hayley, hold my bag for a sec.”

“Sure,” Kristen interjected, “but when you get back you can find us at the bar,”

Ako waved her hand nonchalantly and with that, she ran — nay — sprinted to the nearest bathroom. Despite being labeled the most studious and organized in our high school yearbook, Ako was and remained the most hypersensitive of our little band of friends, and prone to being a little bit of a hypochondriac. If her Achilles wasn’t playing up from her ballet lessons, her stomach felt a little queasy. If her stomach was okay, then her vertigo would be keeping her in the school nurse’s office. Kristen and I learned to love and laugh at this trait. We now find it endearing and wouldn’t have her any other way.

“Poor thing,” I laughed as I watched her elbow between an old couple to make it to the facilities. “Dude, she took a whole handful of Dramamine, too. We should maybe reconsider that ride on the London Eye until she’s a little more with it.”

“Kris, we landed like ten minutes ago. Can’t you wait like five minutes?” I had freshly turned twenty-one and had yet to discover why people enjoyed alcohol like they did. Kristen, on the other hand, had been consuming alcohol like she’d been twenty-one since we were sophomores in high school and would always find ways to make me her party girl wingman.

“Hayley…” She led us towards the Express Public House. “If you wanna fit in while we’re here, you have to learn the customs and one of those customs is the ability to down a pint or two without whinging. So, how ’bout ya relax a little? That theater major has made you a drama queen.”

“Hey!” I replied, feigning offense. She smirked to me and I nudged her playfully. “All those acting classes may well have made me more sensitive, but remember that when we go to the Globe to see Shakespeare I’ll be able to follow what the actors are actually saying.”

“Oh, no! The humanity!” she cried. “How shall I survive without understanding some shitty play? How will I go on, Hayley? How?!” She grabbed my collar and shook me.

“Alright, smart ass.” I laughed. “Hurry up so we can get a seat at the bar. Ironically, my legs are exhausted despite not having actually used them in a day.”

I followed Kristen to the bar, figuring I could, at least, grab a Diet Coke. I’d been left parched after the flight anyway, and this would be my first opportunity to hopefully scope out some of the local English hotties and backpackers who might be hanging about. Where Kristen enjoyed the Australian twang, I much preferred the fancy sounds and lingo of the British accent— It had some strange arousing effect on me beyond any other. I longed to have a boy whisper in my ear with the proper annunciation of the old country. Maybe that’s why I loved acting in Shakespeare plays so much— Because my American classmates were forced to use the dialect all the time.

I sidled up to the bar. “Uh, one Diet Coke please.”

“One Diet Coke,” the young bartender repeated— in that accent — as he placed Kristen’s cold, frothy pint in front of her.

“Whew!” Kristen proclaimed under her breath and slid off her denim jacket. When she looked back up, I saw her eyes widen. “Girl,” she said.

“Girl,” she said again, “now if that is any indication of the male pool we have to select from, Lord have mercy on us all. Look at that guy.” She gestured a nod to some perfectly roughened, sleek-looking guy in a leather jacket at the end of the bar also sipping on a beer. “That should be your first conquest. Let’s start early.”

“Uh, I’m not looking for a conquest. ” I realized that I’d grown hot at the mere sight of this dude. “You’re the one who leaves the trail of broken hearts behind you, remember?”

The cool pint glass met my lips as Kristen held it up to my face. I shook my head. “Still way too early in the day, babe,” I said.

“You, my dearest friend, need to loosen the hell up. You wouldn’t have allowed me on this trip if you didn’t want me showing you how to have a proper good time. College is finished. You can’t use the ’I can’t, I’m studying’ excuse anymore. I’m getting you laid on this trip, by someone who doesn’t have a five-year plan, adult acne, or plans for a shitty start-up.”

“Hey! Julian was none of those.”

“Um, Julian was a fuck-boy, Hayley, and you damn well know it. Your adventure starts here and now and will not include any guys that wear golf clothes and tanned loafers and comb their hair all weird and bore me to death.” She took another long sip of her beer. “If I see you with one more guy who wears Lacoste polos and flip-flops, I swear to God…”

Kristen continued to judge my taste in men and I surreptitiously glanced back at the leather jacket at the end of the bar: Dark blonde hair, piercing blue eyes, arm tattoos now revealed out of his white t-shirt, a bit of stubble, large hands…I don’t usually notice hands but when he grasped his pint I noticed something a little odd— Black nail varnish. ‘Ick’ was my first reaction to the questionable and unexpected accoutrement. But then it became clear that nothing, not even the nail polish, could make me deny that this guy was seriously hot in a way that made my down-there tingle in delight.

The stranger looked my way. Our eyes met for one brief moment and usually, I’d be so embarrassed or intimidated I’d shoot my eyes in another direction. But he locked me in some weird Rasputin-like hypnosis…The intensity in his ice-blue eyes as he narrowed them to me…A blush bloomed over my face and finally dropped my gaze. I surprised myself. I never blushed. My hand, cool from the soda, somewhat alleviated the glow in my cheek.