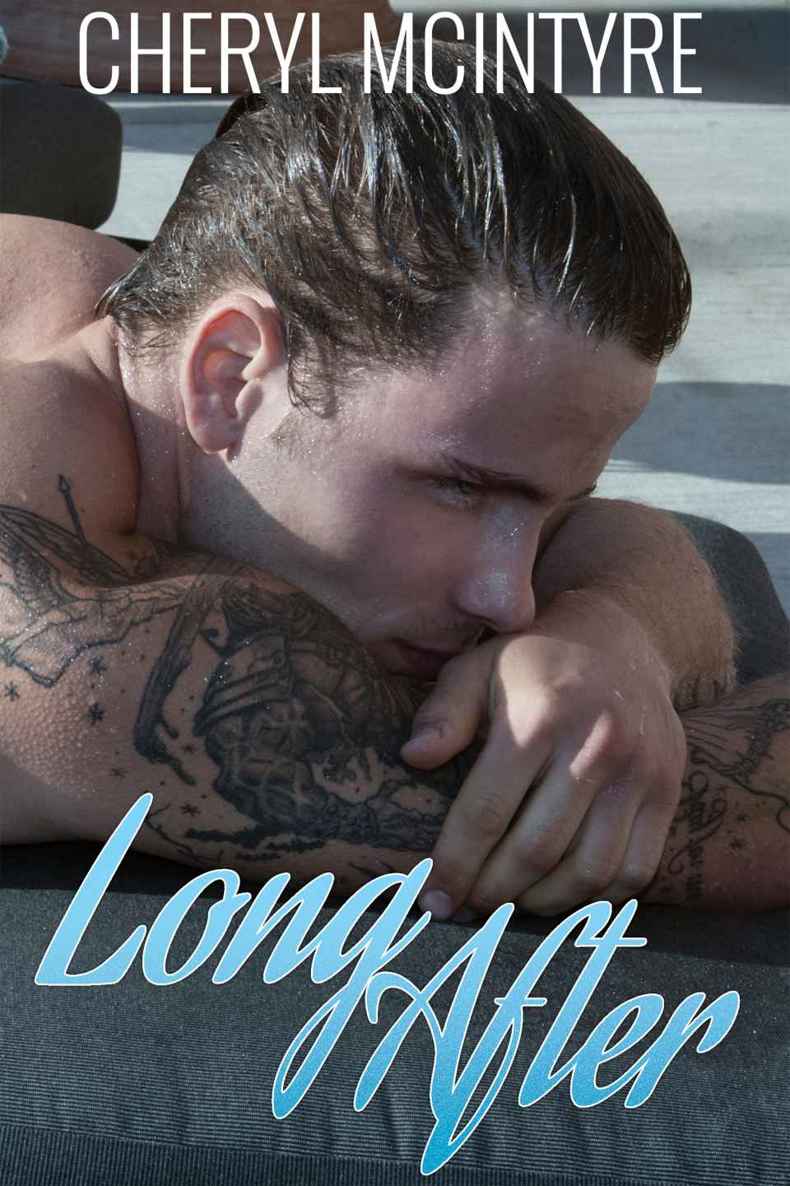 No part of this book may be used or reproduced in any form without prior written permission by the author except where permitted by law.

This book is a work of fiction. Any references to real persons, events, or places are used fictitiously. The characters are the work of the author’s imagination, and any resemblance to person living or deceased, events, or locales are coincidental.

The author ackno
wledges the trademark status, as well as ownership of products referred to in this work of fiction. The use of these trademarks have not been authorized, nor are they associated with, or sponsored by the trademark owners.

Other books by Cheryl McIntyre:

For as long as I can remember, music has been important to me. So
metimes when the right words refuse to form, a song will say them for you.

Each chapter in this novel is named after a song title. I did this because, like me, Chase eats, sleeps, and breathes music. And sometimes what he’
s unable to voice aloud, he says with a song.

T
he playlist is on the next page if you want to look over it prior to reading.

I hope you enjoy Chase and Annie’s story.

In Repair by John Mayer

Weekend Warriors by A Change of Pace

The Descent by Bob Mould

Girls and Boys by Good Charlotte

A Dustland Fairytale by The Killers

All
in Your Hands by Framing Hanley

You Got Time by Clare and The Reasons

Absolute by The Fray

Say (All I Need) by One Republic

Fade Into You by Mazzy Star

Bound For the Floor by Local H

Stir It Up by Bob Marley

Love Somebody by Maroon Five

About a Girl by Nirvana

When You Were Young by The Killers

Her Diamonds by Rob Thomas

Who I Am Hates Who I’ve Been by Relient K

Everlong by The Foo Fighters

Alone Together by Fallout Boy

Clever Love by Angels and Airwaves

She Ain’t You by New Hollow

My Best Friend by Weezer

The Kill by 30 Seconds to Mars

Something Real by American Hi-Fi

Do You Realize by The Flaming Lips

The Heart Never Lies by McFly

All This Time by One Republic

Near To You by A Fine Frenzy

Endlessly by The Cab

I Will Not Bow by Breaking Benjamin

The Red by Chevelle

Here With Me by Dido

Give Me Love by Ed Sheeran

Lovesong by The Cure

11 All in Your Hands

18 Bound for the Floor

25
When You Were Young

Nobody is perfect until you fall in love with them.

I have tunnel vision. That’s the only way I can describe it. I can’t see his face anymore. The only image in front of me is the memory of his hands on her. Something flips, and I get a flash of her face. Of the terror and panic in her eyes.

The faint smack of skin hitting skin resonates in my ears,
but it sounds far away. My hand stings and it fuels my anger.

I’ve never felt like this
in my life. Never. Nothing else has ever made me this way—this angry. I don’t think
anger
even comes close to describing what’s happening inside of me right now.

I’ve heard the saying: “Seeing red.” I never understood it until two minutes ago. My sight actually changed. It was a purely physical reaction I had no control over. Everything d
arkened. And then everything was red.

There’s a ringing in my ears, accompanied by a whooshing—my blood pressure or adrenaline drowning everything else out. My face is hot. My hand is starting to hurt less. I register all of this.

But I still can’t see his face, even as my fist makes contact over and over.

I want to kill him.

I’m going to kill him.

I don’t
want
to stop.

As my hand slams
into his flesh, it doesn’t feel like I’m striking hard enough. I strain the muscles through my arm, trying to put more pressure behind each hit. I need to hurt him. He needs to feel pain. Pure. Fucking. Agonizing. Pain.

He fucking hurt her
.

I raise my hand, popping
my arm back. It shakes. My whole body is vibrating. I can’t stop it. It’s the merciless rage roiling through my veins.

My chest is heaving and sweat tric
kles down my temples. I let my eyes find her face again. Take in the red and purple skin there. My gaze lowers to her throat. Scarlet fingerprints line her neck. I clench my fist and narrow my eyes. My jaw is set so tightly it feels like I could break teeth.

More images fire through my mind’s eye—Annie
’s body pressed to the floor, pinned beneath his weight, his hand clutching her throat. Her lips were blue.
God
, her lips were fucking blue and he wasn’t stopping.

I can remember the exact moment I met Chase Malloy as if it were yesterday. It was the day Mom took me and my little sister, Addie, over to meet Alec’s kids. She’d been dating Alec for a few months and he had proposed. He was going to be Mom’s third husband, and though I didn’t count on their relationship lasting—because, honestly, her relationships never did—I decided to go with that whole third-times-a-charm thing.

When Alec called the
other kids into the living room to make introductions, a tall, gangly boy trailed behind everyone else. Even though the boy didn’t belong to Alec, he was Guy’s friend and a constant in the house. His brown hair was long and messy and he wore a band tee shirt that had seen better days. There were holes in his jeans—ones I’m fairly certain he put there purposely—and he had the biggest grin on his face. Even at fourteen, even though he was dressed like a freak, I thought he was gorgeous. There was this soft beauty to his face. Most teenage boys were covered in acne, but Chase had flawless skin. And his hazel eyes were almost mesmerizing, framed in thick lashes the same color as his hair. When he shifted in front of the window, and the light caught his eyes, it was like a kaleidoscope of color. And oh, that smile. He had a mouth full of perfectly straight white teeth.

I
remember sliding my tongue over my own teeth, bumping along my braces. I kind of hated him right then and there. Boys shouldn’t be that pretty. Especially when I had to work so hard to not look hideous. My blonde lashes are invisible unless I wear mascara, and Mom hadn’t let me wear it until just a few months prior.

At least my chest had finally started
to grow—something I had thought would never happen—though I was still much smaller than most girls my age.

Chase didn’t seem to care much about the way I looked. He barely registered I was even in the room, which made me dislike him more.

I was sick of not being seen.

I was tired of being so plain that I couldn’t garner the attention of a single
person in my life. Except from Mom, and that was attention I’d rather not have, because she only reminded me of the many ways I wasn’t good enough.

I had already decided I didn’t like Chase because he made me feel inferior. It wasn’t his fault. He didn’t do anything wrong.
But fourteen year old Annie didn’t understand that.

Sometimes twenty
-one year old Annie has a problem recognizing that, too.

So when he finally acknowledged me, trying to make small talk, I did the only thing I was ever truly good at.

I pretended I didn’t care about a single word that came out of his mouth. I treated him like he was stupid. I acted as if he was the most annoying person I had ever met, and at times, he actually was. Because Chase didn’t care how I treated him. He just ignored my attitude and when he wasn’t ignoring me, he was dishing it out just as fiercely as I was.

And so began a silent rivalry.
Each time we saw one another, it was game on. I would sling an insult, to which he always had a comeback for. This was how our relationship worked. And really, it worked well for a while. Until something shifted. Something changed and I didn’t want to insult Chase anymore. I wanted to talk to him. I wanted to laugh at his jokes. I wanted to be near him. But he was far from my type. Besides, hating each other was our thing, and I’m nothing if not consistent.

I wish I could distinguish the defining moment we became more than… Just
more
. But I don’t know when it happened. Maybe it had always been this way and I just didn’t know it. I think that’s possible. Maybe every time I made some smartass remark, what I was really doing was trying to earn his attention.

To let him know how I really felt.

I should have told him sooner. I should’ve…

Everything is so
dark and blurry right now. Confusing, as if I’m dreaming.

God
, if only this were a dream.

My eyes flutter with the thought and I finally allow them to close.

The Gathering Storm by Bodie Thoene, Brock Thoene
Seven Kisses in a Row by Patricia MacLachlan
Lemonade Mouth Puckers Up by Hughes, Mark Peter
Other People's Heroes (The Heroes of Siegel City) by Petit, Blake M.
Rescued by his Christmas Angel by Cara Colter
The Back-Up Plan by Mari Carr
Never a Mistress, No Longer a Maid by Maureen Driscoll
Ever After Drake by Keary Taylor
Private Investigation by Fleur T. Reid
Shotgun Bride by Linda Lael Miller