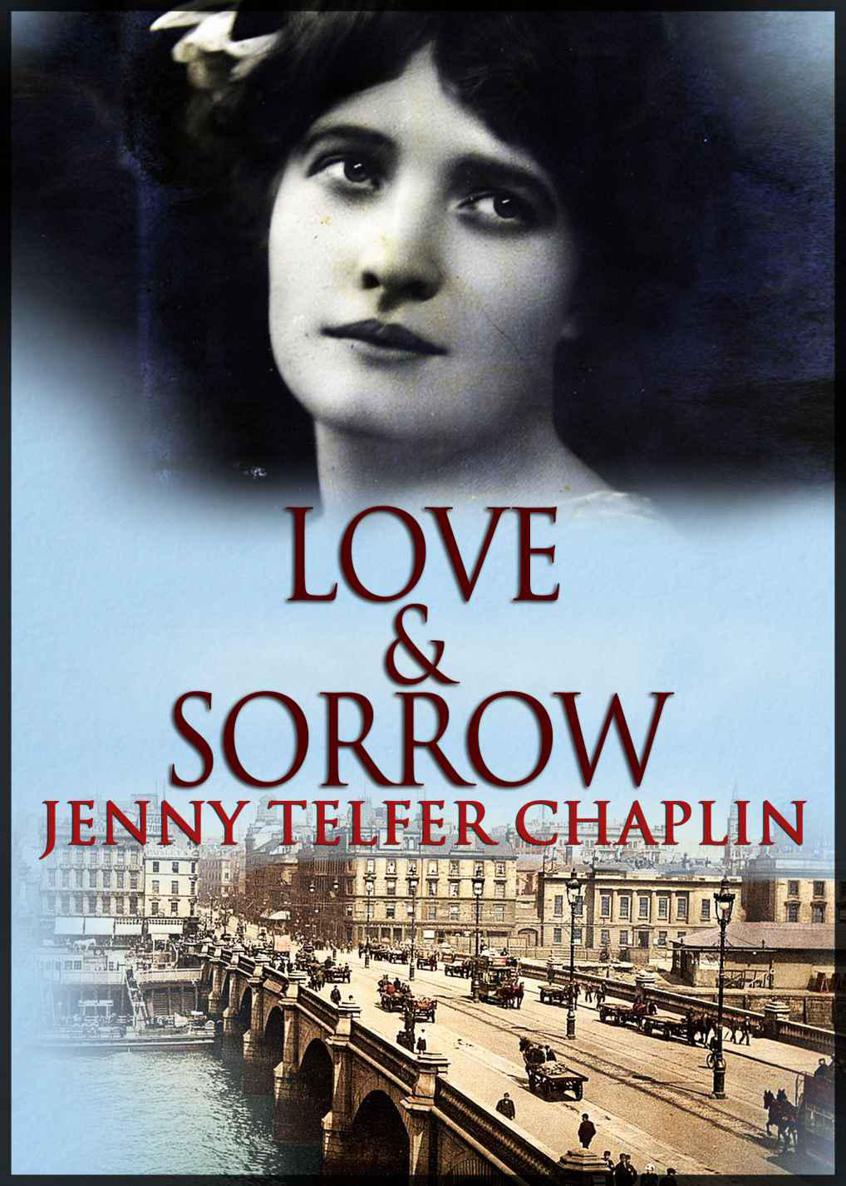 Jenny Telfer Chaplin has asserted her rights under
the Copyright, Design and Patents Act, 1988, to be identified as the author of
this work.

Original
image for the top part of the cover can be found here:

Jenny Chaplin is well known to loyal readers worldwide
for her books on Scottish social history and for her articles in the Scots
Magazine and the Scottish Banner.

As a Fellow of the Society of Antiquaries of Scotland,
Jenny is well qualified to write her historical novels after years of research
into and writing about Scottish social history.

She now writes her novels in her centuries old cottage
on the Island of Bute under the name Jenny Telfer Chaplin to differentiate
between her fiction and non-fiction writing.

The early morning light filtered through the threadbare
curtains at the window of the tenement flat but for all the joy it brought the
three young women in the room at the dawning of a summer’s day, it might as
well have been the dark of mid-winter. Engaged as they were in this most secret
of tasks, the darkness was already in their souls. As one tear-stained,
matted-haired woman writhed in agony on the bed, the second with her untrained,
so-called midwifery skills, struggled to bring into the world a reluctant baby,
and the third member of their conspiracy sat continuously chewing her
fingernails to the quick as if already doubting the wisdom of their actions.

As they all knew the pregnant woman had been in the
throes of her tortuous labour for what seemed to them an endless age but which
was in reality a little more than ten hours. Despite the midwife’s well-meaning
but feeble efforts the baby was no nearer to making his or her way into the
waiting world. The constant urging to keep pushing but to do so quietly lest
her screams be heard by the bairns across the landing in the neighbour’s flat
did even less to comfort the patient than the regular mopping of her brow with
a vinegar-soaked rag.

With the light gaining strength the appointments of the
room gradually became clearer – the black steel sink under the window; the
goose-necked cold water tap; the wax-cloth-covered table; the mantelpiece with
its regulation pair of wally dugs, brass candlesticks, tea caddy, and
overhanging gas mantle; the crammed to capacity pulley with its array of vests,
towels, nappies, and knickers; the home-made wee creepie stool; the rather
decrepit armchair into which the ‘Heid o’ the Hoose’ would slump when home
between stints as an ocean going deckhand.

Just as the rays of the sun reached the recess bed and
the pain-wracked face of the young woman, with a final scream and arching of
her body, she finally expelled the burden she had carried with her for nine
long, weary months. What a hated burden it had been for both her and her
sister. For the final months and weeks of her pregnancy Meg had ventured out only
at night enveloped in an enormous, moth-eaten shawl, while her sister, Nellie,
had waddled round the streets of Bridgeton and her already child-filled
tenement home with a cushion tied to her waist creating the supposed bump of a
growing baby in her belly.

The self-styled midwife cleaned up the baby, wrapped it
in a crocheted shawl, and held out the latest bundle of humanity.

“There sh
e is then, a bonnie wee
baby.”

When there was no reply, nor even as much as answering
smiles from her audience, Hannah persisted. “Weel, if naethin else, surely
between the pair o ye wi aw the fine planning ye’ve done, surely tae God ye’ve
at least thought up a name for the puir wee bastard.”

As the harshness and bitter reality of this hated word
sounded in the stillness of the early morning somehow its echoes seemed to hang
in the air between them. Finally Nellie got slowly to her feet and glaring at
Hannah said in a voice low with menace: “Bastard? Naethin o the kind. Don’t you
iver again use that hideous word referring to that poor wee mite.”

Hannah nodded and opened her mouth as if to speak, but
Nellie hadn’t finished with her tirade.

“See her? See that wee scrap o humanity – you can call
her any first name ye like, but Ah’m tellin ye this: as far as her surname goes
… she’ll bear ma husband’s name, jist like aw the rest of ma ither bairns. Dae
ye understand?” Hannah nodded. “Jist in case ye don’t get the picture, frae
this minute on ye keep your silence – silent as the grave would jist aboot dae
it.”

Hannah locked glances with the red-faced Mrs Nellie
Bryden then slowly and deliberately rolled down her sleeves.

“Oh aye! That’s one thing sure … Ah’ll no be saying a
word tae naebody. Apart frae onythin else – and maybe ye dinnae ken this, Mrs
Know-it-all, but see the very minute ye gie false details aboot an illegitimate
bairn on any official document, like it or lump it, ye will be breaking the law
o the land, so ye will.”

From the quick indrawn breath and the look on Nellie’s
face Hannah grinned, taking it that her barb had struck home and this was
indeed news to Nellie.

Having completed her task to her own satisfaction, the
self-righteous Hannah turned and called back from the doorway: “As far as a
Christian name goes, why don’t ye call her Becky? Ah had an auld Aunt Becky and
see her, talk aboot being lucky! Aye! She was that lucky in everythin she
touched in this life that folk used tae say o her that if she fell in the Clyde
she’d come up wi a gold watch. Aye! The name Becky should dae that puir
faitherless bairn jist fine. For let’s face it, if anybody ever needed a bit o
luck in this life ye can take it frae me it’s gonnae be that puir wee innocent
bastard.”

With the noise of the slammed door still ringing in
their ears Nellie and Meg looked at each other and almost in unison said:
“Right! Becky Bryden it is.”

Nellie bustled around the kitchen preparing a pot of
tea and said: “Right, Meg, one way and another, between the pair o us, we’ve
battled our way through this bit o bother jist fine and dandy.”

A wan-faced Meg nodded and, exhausted, fell back. The
pain and trauma of the night faded and she slipped into a dreamlike state …

Alex Cartside was so much more sophisticated than
anyone Meg had ever met before. His polished manners and refined speech
attracted her right from the very first time she saw him standing at the podium
lecturing the class on the finer points of diction – “So necessary for a
teacher to give a good example to her pupils.”

She was thrilled when in the second week he had
complimented her in front of the whole class on her excellent speech and
speaking voice. Their accidental meeting in Miss Cranston’s on Sauchiehall
Street was the high point of the third week at the Normal School and she
readily agreed to his proposal that they meet at Kelvingrove Art Gallery.
There, he said, he could expand her horizon, discussing with her the excellent
art, and thus making her a better teacher.

The visit to the gallery was very pleasant and at the
afternoon tea which naturally followed Meg was charmed and readily agreed to
further meetings.

Miss Euphemia Edgar, the spinster teacher who had taken
Meg in when her parents died and with whom she still lived, warned her against
‘any romantic entanglement’ which would end her career in teaching. Meg had
laughed. Alex was a lecturer at the Normal School, a good ten years older than
she; he was simply good-heartedly interested in helping her become a better
teacher.

However, as the meetings went on Meg was aware that
while still formal and proper Alex now occasionally held her hand and once
daringly put his arm round her waist. The first kiss in the twilight walking in
Kelvingrove Park startled but thrilled her and she found herself kissing him
back. Meg declined the next invitation, but Alex had pulled her aside after
class and apologised, saying he had been carried away by the moment and that it
wouldn’t happen again. Their next meeting was again formal but in subsequent
meetings they moved to amorous caresses and before Meg stopped to think they
were in his rooms and it was too late to think.

In mid-November she discovered she was pregnant. Alex’s
response to the news shocked her. He implied that she, a woman of loose morals,
couldn’t possibly be sure the baby was his, and that anyway he was moving back
in with his wife from whom he had had a temporary separation. He was resigning
his post at the Normal School and taking up a similar post in Canada in the New
Year.

Meg left Miss Edgar’s comfortable home saying her older
sister needed her and she moved in with Nellie.

Later that day after copious amounts of tea Nellie
sighed.

“Why on earth ye had tae gie everythin away like that,
it fair beats me. Honest tae God the mair Ah think aboot it, the angrier and
mair het-up Ah get. Tae think o aw the chances ye had that Ah niver even got a
look at … ye were clever; ye got tae stay on at school efter Maw and Paw died
and that dried up auld spinster o an English teacher wi the posh talk and stuff
took ye in. Ye even got tae begin yer training for tae be a schoolteacher. A
schoolteacher by God – and then …”

Meg eased herself up on the bed and reached out a
detaining hand.

Nellie brushed Meg’s hand aside and shouted: “Och,
Nellie, nothin. This is somethin Ah hae tae say and God help me Ah will say it.
It makes me fair boil wi rage when Ah think how bloody stupid ye’ve been. Where
were aw yer brilliant brains then when ye were daeing the business wi him? Was
aw yer high intellect and yer high-falutin manners doon therr skeeterin aboot
in yer knickers?”

Meg’s face became even paler and she gasped.

Seeing the effect of her diatribe on her sister, Nellie
relented somewhat.

“Och, listen, hen, what’s done cannae be undone but wi
yer lover by noo over the seas tae the colonies tae escape his
responsibilities, God alone knows what on earth ye’ll dae noo. But one thing Ah
dae ken. Ye’ll no be able tae stay here in ma hoose. Ma ain tribe o bairns will
be back frae across the landing the morn’s morn and Ah’ll need tae introduce
them tae their new wee sister Becky. Apart frae onythin else ma man could be
arriving back frae the high seas any day noo. He’s gonnae be surprised enough
tae see another new bairn – although mind you the way he went on at the
hochmagandie on his last leave it shouldnae be as big a surprise.”

Meg blushed at her sister’s use of the coarse old
Scotch word for intercourse. “It was fortunate that this trip took him away for
just over the nine months.”