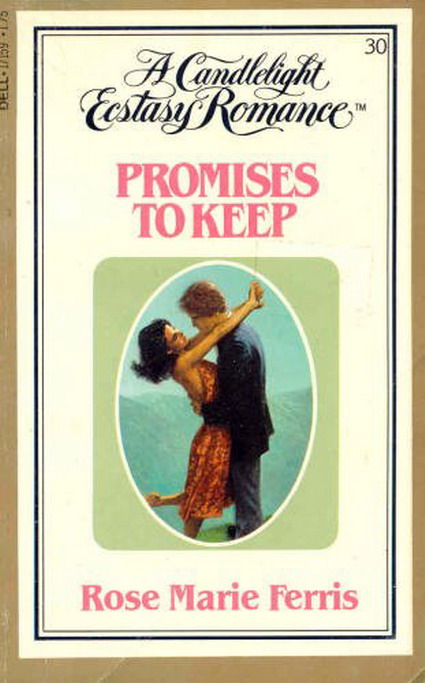 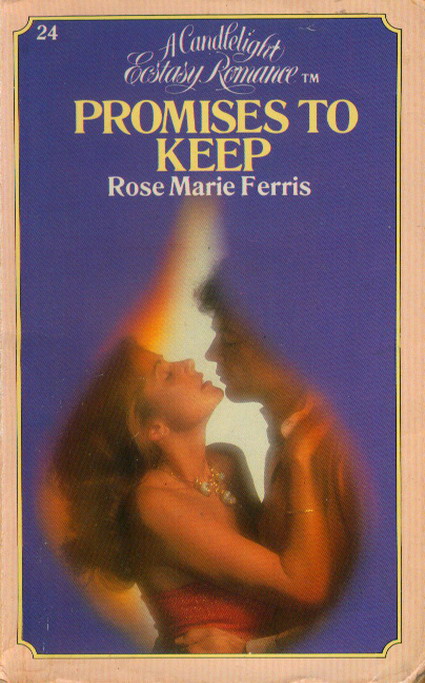 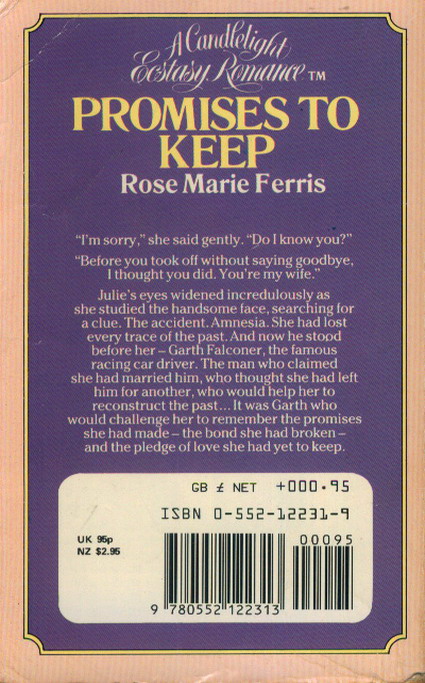 She was running so fast, she seemed to be flying, her feet hardly touching the ground as she dodged the lacy foam. Breathlessly she sensed the approach of the man who was pursuing her, and her heart thumped wildly with expectation.

Then suddenly the scene shifted. She was in a roofless cave, submerged in the warmth of her lover's arms, drowning in the excitement of his kiss. But when she tried to look into his face, she awoke, terribly, frighteningly alone. Was it a beautiful dream or an ecstatic memory? Would she ever see that face? Recall his name? Would she ever find the man who possessed her past and haunted her dreams?

We hope you are enjoying our exciting and successful series, the Candlelight Ecstasy Romances. This month we are bringing you two new books—books for the kind of woman who knows how to respond to love, and to life. Women like you. They are:

Love Beyond Reason by Rachel Ryan
(No 23)

Promises to Keep by Rose Marie Ferris
(No 24)

And there are twenty-two titles already available:

Gentle Pirate by Jayne Castle
(No 1)

The Passionate Touch by Bonnie Drake
(No 2)

Leaves of Fire, Flame of Love by Susan Chatfield

The Tempestuous Lovers by Suzanne Simmons
(No 4)

Surrender by Moonlight by Bonnie Drake
(No 5)

Ocean of Regrets by Noelle Berry McCue
(No 7)

The Marriage Season by Sally Dubois
(No 8)

The Heart's Awakening by Valerie Ferris
(No 9)

Desperate Longings by Frances Flores
(No 10)

Besieged by Love by Maryann Young
(No 11)

Wagered Weekend by Jayne Castle
(No 12)

Sweet Ember by Bonnie Drake
(No 13)

Stolen Holiday by Marjorie Eatock
(No 15)

Breeze off the Ocean by Amii Lorin
(No 18)

Right of Possession by Jayne Castle
(No 19)

Bargain with the Devil by Jayne Castle
(No 21)

Stages of Love by Beverly Sommers
(No 22)

Have you read these yet?

We will be bringing out more books in the series—every month. Watch out for them—look forward to them—and welcome to the warmth of Candlelight Ecstasy Romances!

Sometimes it seemed as if the mist that clouded her memory was about to lift. Any number of things might trigger this suspenseful feeling. A certain slant of light, snatches of music overheard on another patient's radio, the sound of laughter—even the smell of newsprint or of rain-dampened wool or the scent of roses had caused it. It lasted for only a matter of seconds before, as quickly as it had begun, it was gone. Then the mist descended again, as impenetrable as ever.

Dr. Ziegler had counseled her simply to relax when it occurred. He said this would make it easier for her memories to surface, but so far this had proved to be impossible advice to follow. Inevitably, when the feeling waned, she was tense with the prospect of self-discovery; her forehead was dewed by perspiration, and she was weak and shaking from the strain of trying to remember.

By the beginning of her third week at the hospital, she had recovered enough from her injuries so that she was fully ambulatory. As her physical condition improved, her restlessness increased, leading her to spend a part of each day visiting the children in the pediatric ward. She read them stories or played games with them, and the overworked nurses were grateful to have the services of a volunteer who was willing to help entertain the youngsters.

It was among the toys in their playroom that she found the cowrie shell. She touched it with wondering fingers, thinking that it was a peculiar artifact to find in such a place; for Green River, Wyoming, was hundreds of miles inland and half a world away from tropical seas. When, in her turn, she held it to her ear, she heard the roar of the ocean that was forever trapped within the pearly prison of the shell, and this sound caused the past to glimmer more brightly than ever before through the dark veil of amnesia.

That night, for the first time since her admission to the hospital, her sleep was broken by a dream. At first it was lovely. She was racing along a beach beside an endless sea. The shore was dotted with bathers, the sand was fine and white, and the sky was a vast and cloudless blue, its purity marred only by the faint white ribbon of a single vapor-trail far, far above. She was running so fast, she seemed to be flying, and her feet seemed hardly to touch the ground as she dodged the lacy foam of the surf. As she ran she was laughing, though the sound of her joy was muted by the crash of the breakers. Now and again she glanced back over her shoulder but she knew that her reluctance to be overtaken by whoever was following her was only a pretense and that she really wanted to be caught.

Nevertheless she ran on and on, leaving the more crowded beach behind and finally rounding a rocky headland to duck behind an outcropping of boulders. In this secluded spot she paused, leaning against the roughness of the sun-drenched stone to catch her breath as the spray from the waves breaking on the rock washed over her. She sensed the approach of the man who pursued her, and her heart thumped wildly with expectation.

Suddenly the scene shifted. She was in a sort of roofless cave that was formed by the narrow cleft between two boulders and she was submerged in the warmth of her lover's arms, drowning in the excitement of his kiss. She was borne gently downward until she lay with him in the cool shadow of the rocks; so vivid was her dream that she could feel the grainy texture of the sand beneath her back. She felt the sand accommodating itself to the curve of her spine as he covered her body with the urgent weight of his.

She rejoiced in his closeness, in the strength and heat and hardness of his body, in the silky friction of his skin rubbing against hers as their limbs entwined. She threw her head back and opened her eyes to see a lone gull soaring overhead, its white wings arcing against the pristine blue backdrop of the sky, the sole witness to their loving.

But when she tried to look at her lover's face, she awoke. The dream was gone and he was gone, and she was terribly, frighteningly alone. Still trembling with the remnant of her passionate response to the anonymous man of her dream, she stared into the darkness of her room.

It had seemed so real.
He
had seemed so real— more real than the people she saw daily at the hospital. Was it possible he was someone from out of her past, or was he merely a phantom invented by her subconscious? Had she actually lived the events in the dream, or were they sheer fantasy?

Against her better judgment, because the dream had assumed such importance to her, she put these questions to Dr. Ziegler when she saw him later that day. He studied her, furrowing his brow and stroking his beard contemplatively for a few moments before he answered, giving her a typically ambiguous reply.

"It's possible your dream has some basis in fact," he told her, and she felt a bubble of elation rise within her. Then he continued smugly, "Of course it's much more likely that your dream was pure sexual indulgence."

Hide Her Name by Nadine Dorries
Kaleb (Samuel's Pride Series) by Barton, Kathi S.
Lord of the Shadows by Jennifer Fallon
A Rich Man for Dry Creek / a Hero for Dry Creek by Janet Tronstad
A Creed for the Third Millennium by Colleen McCullough
We Were Brothers by Barry Moser
The Heart That Wins (Regency Spies Book 3) by April Munday
Hooked by Polly Iyer
Phoenix Bar: A Steel Demons MC Novel by Annelise Reynolds
The Storm That Is Sterling by Jones, Lisa Renee