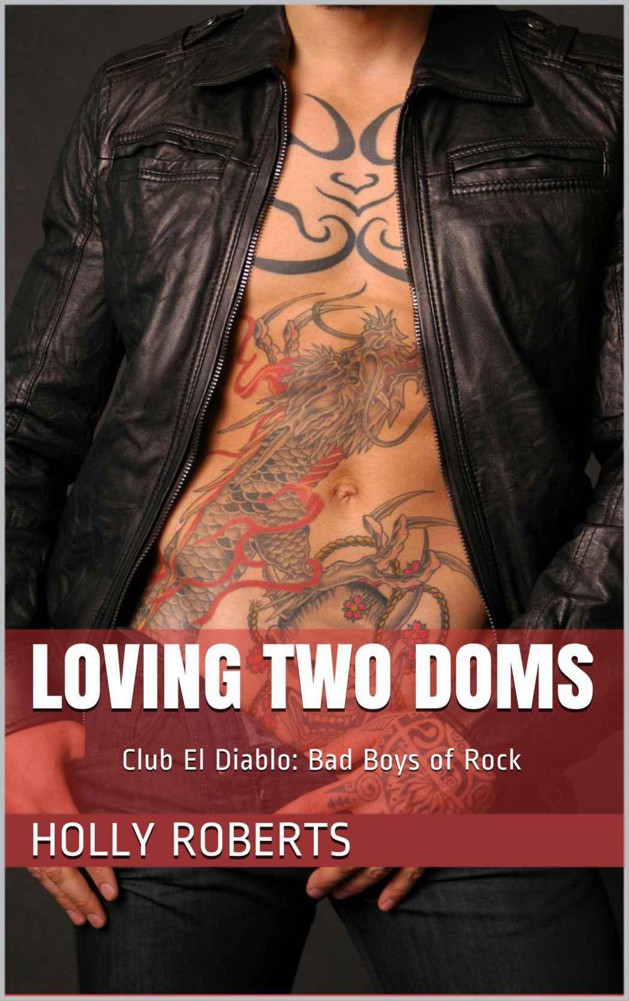 All rights reserved including the right to reproduce this book or portions thereof in any form.

Having a woman deep throat your cock while your best friend pounds her from behind should have relieved some of Matt’s emotional frustration, but it didn’t. The sub was doing a good job at licking and sucking, but Matt just wanted the night over with and a few hours of uninterrupted sleep.

Stephon, his best friend, pumped for all he was worth, and didn’t look like his desire to play would diminish anytime soon. A few minutes later, Matt managed to come inside the restricting condom and slap on another before switching places with Stephon. His hand went to her clit and circled the hard swollen nub while sliding his cock in and out of her pussy, making her moan. They’d teased the woman for hours, and the least he could do was give her another orgasm while he tried to get himself off again.

Hours later, the faint breeze from the air conditioner and the warmth of the naked woman snuggled closely to his side woke Matt up. Stephon’s long arm draped across one of the woman’s breasts and touched his shoulder. The man was a bed hog, but Matt had learned to put up with it a long time ago. His gaze traveled to the sleeping sub; it was hard to make out her features in the dark room.

What was her name?

It was Mary Lee or something similar, but his foggy brain couldn’t quite remember. Rolling off the oversized bed, he found his discarded jeans and managed to leave the room without waking them up. Matt knew Stephon wouldn’t mind a one-on-one round of morning sex followed by treating her to breakfast.

Stephon loved to dominate a willing sub for hours, and even though he was more sadistic than Matt, he took great pride in aftercare and nurturing. Women loved Stephon’s rugged good looks, closely cropped hair, and boy-next-door image that even his body ink didn’t detract from. Matt looked more like the big bad biker type, and had no problem leaving the morning cuddling to his friend.

The suite he and Stephon currently occupied was in Houston’s exclusive El Diablo Hotel, which offered twenty-four hour amenities. He looked at the house phone but knew he needed more than food to clear his head, so he decided not to order room service. After making use of the shower in the suite’s other bedroom, he brushed his teeth, but didn’t bother shaving. His scruff could grow until their next concert, which was a week away, and then he’d groom his dark facial hair to the perfect sinister shadow he was famous for.

The bedroom clock showed a little after five in the morning. They hadn’t come back to the room to play with… he finally remembered that her name began with an S. Stephon would know it, but for Matt “baby,” “kitten”, and other assorted endearments just ran together. He shook his head. They had come in after midnight and didn’t sleep for the first couple of hours. His brain’s grogginess wasn’t clearing and remembering her name was too much trouble.

His favorite acoustic guitar rested by the couch and he thought about working on new music Krispin had them practicing, but he needed to get away from the closed-in feeling of the hotel room. Grabbing a twenty off the dresser, he didn’t bother with his leather jacket because the weather would already be heating up the late-spring streets.

One of the ever-present doorman nodded and said, “Good morning, Mr. Mathews.”

“Good morning.” He turned left, took a deep breath, and walked away.

The still air carried the scent of restaurant garbage that always seemed to fade when the city came alive with the rising sun, but for now it settled around him, causing a longing for clean country air. Picking up his pace, he tried to shake lose the melancholy that grew worse each day. He wasn’t sure exactly what the problem was, but he was damn tired of feeling unsettled.

Krispin had insisted on this three-week kinky break at the El Diablo Hotel, which would only be broken up by one cluster of four concerts. The entire band knew Krispin had them stay here for his wife, Angela, but they didn’t mind. Club El Diablo was Angela’s home away from home and where the couple had met. She’d blossomed under Krispin’s care, and in a very short time, she’d become a major support arm behind the band. They were all willing to give her just about anything she asked for. Matt’s shoulders relaxed as he walked and thought about the tedious everyday work Angela did on their behalf.

Two miles away, he saw an urban coffee shop where you needed an instruction manual just to place an order. He walked past the smell of grinding coffee beans, and even this early noticed a few smartly dressed business men and women stimulating their system for the coming workday.

He didn’t care about the looks cast his way. He looked like a thug with his black sleeveless t-shirt displaying the ink covering his arms, and his finger-combed, too-long hair. At six foot three and two-hundred thirty pounds, no one bothered him.

He turned another corner and the smell of fresh baked… something overpowered the waning foul odor that wafted into the city skies as the sun finally peeked over the tops of the high-rise buildings. The titillating scent of baking led him further up the street.

A sign blinked above the sidewalk on the other side of the road—STARLA’S CAFE. He crossed over and looked inside. There were yellow Formica tables with booths against three walls and a lone red-headed older waitress behind the counter pouring dark coffee from a glass carafe for two men sitting at the counter. He entered, and after seeing the “seat yourself” sign in the metal stand-up holder, took the far corner booth.

His kind of place.

“Jewel, you have a customer.” The gruff voice of the waitress behind the counter, probably caused by years of smoking, shouted into the kitchen. The wall behind where she stood, except for the small order window, displayed condiments, cutlery, and a soda fountain. A swinging door to the side, with a small window at the top, led into the kitchen.

Matt grabbed the menu, held up by salt and pepper shakers, and took another deep breath of the incredible smell permeating the small diner. The laminated page showed breakfast on one side, with lunch and dinner on the other. A shadow moved over his shoulder and appeared on the table, causing him to look up.

If it could, his jaw would have hit the Formica.

She was stunning. He stared as she stood waiting with a pot of coffee and a white mug. Even though she was facing slightly sideways, he could see her large crystal blue eyes, which were at odds with her dark brown hair. Her hair was pulled back in a ponytail, showing off her lovely face. Her sensuous lips caused his heartbeat to accelerate. Her curves, emphasized by the tight-fitting, atrocious orange uniform, practically forced him to run his eyes over her body in appreciation.

When his gaze traveled to her face again, a pursed mouth and disapproving eyes stared back. “Coffee?” She wasn’t at all happy with his gawking.

“Yes, please.” His voice cracked like he was some teenager going through puberty.

She abruptly sat the cup down and poured the dark liquid. The jerky motion of her hands and tight sound of her voice let him know he was in hot water. “Do you need cream or sugar?”

“No, thank you.” He tried giving his best bad-boy smile.

It didn’t have a positive effect and her tone hardened a little more. “Are you ready to order?”

“Um, yeah. I’ll have the breakfast special.” He took a deep breath through his nose and asked, “What’s that delicious smell?”

Her shoulders relaxed slightly. “Fresh-baked blueberry muffins. One comes with your special.”

“That sounds good.”
Where were his iron wits when he needed them?

She turned slightly, taking silverware wrapped in a napkin from her apron pocket. Where one side of her face was stunningly attractive, the other showed a long scar running from the corner of her eye down to the dimple at the side of her mouth. There were two jagged, finer pinched lines intersecting the larger healed wound. He didn’t breathe for a minute, but then his gaze went back to her eyes and he smiled. “Simply beautiful.”

Taking a deep breath, Jewel knew pink washed across her cheeks. She was used to the open perusal from men until they saw her “bad” side, but she wasn’t accustomed to anyone calling her beautiful afterward. This man was almost convincing, and his close appraisal made her feel even more uncomfortable. Wrapping her stand-offish armor tightly around herself, she looked the behemoth in the eye. “You’re a talented liar.”

His dark brown eyes flashed in mild irritation before softening. “Yes, I was rude, but you took me by surprise and I reverted to the age of twelve.” His velvet voice traveled across her skin. The timbre dripped sexual desire, if that was possible, and contradicted his rugged biker looks.

She straightened her spine. “When you were twelve, you told girls with facial scars that they were beautiful?” She couldn’t keep the derision from her voice.

His lips tilted in a crooked smile. “No. I missed every opportunity due to being a foot taller, awkward, and having the beginnings of an acne problem. I swore when I grew up I’d never do it again and…” With another quick look over her body, “It’s the entire package that’s beautiful.”

She stared at him in disbelief. There wasn’t a blemish remaining on his face, though his tats peeped out from beneath the collar of his shirt and ran up the sides of his throat. Without conscious thought, her eyes traveled from his neck, down his muscular inked arms, and then lower. His waist and legs, conveniently hidden from view, caused her to realize where her eyes were focused and she quickly brought her gaze back to his.

His grin turned devilish and made him more attractive, in a rough kind of way.

Trade Secret (eARC) by Sharon Lee, Steve Miller
Maps and Legends by Michael Chabon
Scrupulous (An Affliction of Falling Novel Book 1) by Canady, Kristina
Normal by Graeme Cameron
The Three Weissmanns of Westport by Cathleen Schine
Stepbrother With Benefits 11 by Mia Clark
No Place for a Lady by Jade Lee
Hunter's Bride and A Mother's Wish by Marta Perry
Dr Casswell's Student by Sarah Fisher
Rising by Kassanna