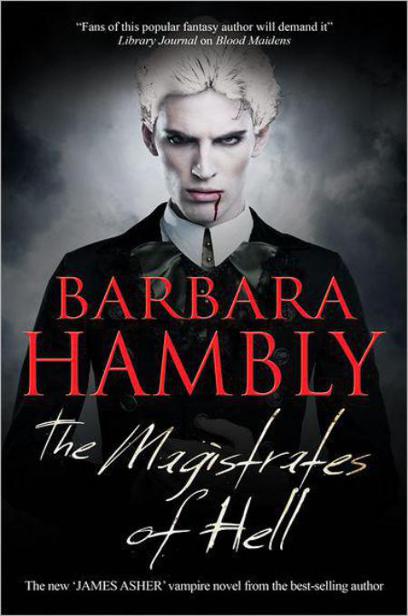 A Selection of Recent Titles from Barbara Hambly

A Selection of Recent Titles from Barbara Hambly

THOSE WHO HUNT THE NIGHT

TRAVELING WITH THE DEAD

THE MAGISTRATES OF HELL *

A FREE MAN OF COLOR

SOLD DOWN THE RIVER

DIE UPON A KISS

DAYS OF THE DEAD

THE SHIRT ON HIS BACK *

THE MAGISTRATES OF HELL

in Great Britain and in the USA by

The magistrates of hell.

This ebook produced by

Special thanks to May Liang

Since the normalization of Communist China’s relations with Western countries in the 1970s, the system known as
pinyin,
by which spoken Chinese is transliterated into the Western, or ‘roman’, alphabet, has gradually superseded the earlier system of transcription – the ‘Wade-Giles’ method, which dates from the mid-nineteenth century. In 1982,
pinyin
was adopted as the ‘official’ method, and all Western books on China now use it.

This made for an awkward choice in writing a novel which takes place in China in the fall of 1912.

I eventually decided to use the old Wade-Giles system to transcribe the spoken Chinese of the story’s characters – and all personal and place names – for two reasons. First, it was the system in use at the time in which
Magistrates of Hell
takes place: Englishmen would have referred to China’s capital as Peking rather than Beijing, and the nineteen-year-old student laboring in the First Provincial Normal School of Hunan would have been called Mao Tse-tung (or Mao Tse Tung) rather than Mao Zedong. (The Chairman does not, by the way, appear in this novel.)

My second reason for using Wade-Giles was simply because most of my research was done from books published long before 1982 (or 1958, when the government of Communist China adopted
pinyin
, for that matter). Either way, I would be altering half of my transliterations from one system to the other, and as I understand it, neither system adequately transcribes Mandarin anyway.

That was my sole consideration in choosing one system over the other. I do not intend or imply any political meaning in my choice, and I apologize if I have offended those who were caught up in the horrors and conflicts of the past sixty years of China’s troubled history. My choice was made purely for aesthetic and historical consistency, and my goal has been, as always, simply to entertain.

‘J
ames,’ said the vampire, and let his long, insectile fingers rest on the keys of the Assistant Trade Secretary’s piano. ‘What are you doing in Peking?’

Asher had glimpsed him from the doorway of the long drawing-room, while attempting to ascertain firstly, whether the man whose testimony might well save his life was at the Trade Secretary’s reception (‘Yes, Sir Grant’s about here somewhere,’ his host had assured him, before being called away to more important guests), and secondly, whether there were any men present who might make arrangements to have him – James Asher – murdered on his way back to his hotel. On a visit to China fourteen years previously, Asher had encountered high-ranking officers of the Kaiser’s Army in the German-held territory of the Shantung Peninsula who would certainly demand a reckoning for his deeds there if they recognized him.

And they probably won’t believe me if I tell them I’ve retired from the Department and am here solely in my capacity as Lecturer in Philology and Folklore at New College, Oxford
. . .

Aside from the preponderance of men in both the drawing room and the parlor behind it – and the fact that the servants were all Chinese – the reception appeared little different from any large gathering in Kensington or Mayfair, to celebrate the engagement of the host’s daughter. The champagne was French, the
croûtes
and caviar on the buffet entirely predictable.

Then Asher had seen him in the doorway between the drawing room and the parlor: a thin, pale gentleman slightly below average height, his long, wispy hair the color of ivory and his face not the face of a man from this newly-dawned twentieth century. A sixteenth-century face, despite the stylish black evening-clothes and white tie. In fact, Don Simon Xavier Christian Morado de la Cadeña-Ysidro had died in 1555.

And had become a vampire.

Asher took a deep breath and let it out. ‘I think you know what I’m doing here.’ He reached for the inner pocket of his long-tailed black dinner-coat, and Ysidro moved one finger:
I’ve read it
.

Of course he’s read it. It’s what brought him here as well
.

For a moment he looked down into the vampire’s eyes, crystalline sulfur palely flecked with gray.
I should have killed him in St Petersburg, when I had the chance.
The fact that Ysidro had saved his life, and that of his young wife Lydia, should have made no difference. Asher had killed vampires, in the seven years since he’d first become aware of their existence, and had seen them kill. He knew Ysidro was one of the most dangerous in Europe. Probably the oldest and one of the most adept in that paramount skill of the vampire, the ability to seduce the minds and influence the perceptions of the living.

To the point that they don’t feel they can kill him even when they’re standing over him with a stake in one hand and a hammer in the other
.

Ysidro turned to the young lady who was seated next to him on the piano bench. ‘Know you anything of Schubert, mistress?’ he inquired in the French that was nearly universal in the diplomatic community.

She nodded – Asher guessed her to be one of the Belgian ambassador’s daughters. Even females slightly too young to be officially ‘out’ were precious additions to parties in the small world of the Legation Quarter.

‘Can you play his “Serenade”? Excellent.’ Though his closed lips hid the long vampire fangs, Ysidro had a beautiful smile. ‘James,’ he went on, rising. ‘Let us talk.’

The hand he put on Asher’s elbow to steer him through the crowd toward the parlor’s bow windows was light as a child’s, but capable – Asher knew – of crushing the bone within the flesh.

The chatter around them did not seem to have changed markedly since 1898.

‘Honestly, there’s no arguing with them,’ declared a bracket-faced matron in lilting Viennese French as they passed, to an elegant dame in aubergine silk. ‘Our Number One Boy will
not
leave the mirror above the mantlepiece in Freidrich’s room, no matter
how
many times I order him to. He says it’s
bad joss
to have it facing the bed . . .’

Dialects and accents were Asher’s hobby and delight – his business, these days, as a Lecturer in Philology. His trained ear identified the schoolroom French of the British and Russians, the slurry Parisian of the French ambassador and his wife. Over in a corner he heard German: a harsh Berliner accent, and a countrified Saxon. Yes, there was Colonel von Mehren, whom he recognized from his earlier visit.
Is he still the Kaiser’s Military Commissioner
? And with him old Eichorn, Chief Translator at the German Legation, who didn’t seem to have aged a day. Von Mehren wouldn’t associate Asher’s current unobtrusive brown mustache and unassuming bearing with his previous incarnation as the shaggy, grumpy Professor Gellar from Heidelberg. No danger there. But Asher had always suspected that Eichorn – one of the long-time ‘China hands’ immersed in the language and culture – was running an information network for the
Abteilung
.

Still no sign of Sir Grant Hobart in the crowded parlor. At six feet two, Asher’s old Oxford acquaintance was difficult to miss. Asher followed Ysidro behind the velvet curtains into the embrasure of the parlor’s bow window, the cold blackness of a bare garden on the other side of the glass. Naked trees fidgeted in the wind that swept from the Gobi desert, dry as the fawn-colored dust which was a part of living in Peking. Like the house, the garden was a brave pretense that living in China wasn’t really so terribly different from being in England: the ‘stiff upper lip’ at its most defiant.

‘I think you will find the Kuo Min-tang deep in error when they seek to give the men of China a vote, Sir Allyn,’ proclaimed a voice just beyond the concealing drapes. Asher raised his brows as he recognized the speaker as the ‘provisional’ President of the new-formed Republic itself: the head of the largest faction of its Army. Yuan Shi-k’ai, stout and gorgeously attired in a Western uniform thick with bullion, watched the faces of the diplomats around him with cold black eyes. ‘The people of China need a strong hand on the rein, as a spirited horse is only happy when it feels its rider dominate it. Without a strong man in power, only disaster can follow.’

Sir Allyn Eddington made the non-committal agreement expected of a host. A few feet off in the crowd Asher heard Sir Grant’s name and craned to look: a slim woman in a very girlish white dress had caught Lady Myra Eddington by the arm – Asher could see the resemblance in their faces. She had asked, ‘What does Sir Grant say?’