“I’m like a kid in a candy shop!” Stephanie exclaimed, as she looked through all of the beautiful gowns and dresses in the spacious closet. She chose a deep blue slim fitting cocktail dress. The back plunged to a deep V just above her ass. She stopped at the hotel salon after her massage to have her hair styled in a sexy up do that would show off her back. She slipped on a pair of perfectly matched deep blue stilettos and headed out the door.

Stephanie felt the weight of many eyes on her as she walked through the hotel lobby. The women she passed gave her the once over, and she noticed emotions in their eyes that ranged from pure envy to appreciation. The men, though, their glances were something altogether different. She saw lust and desire in their stares. She liked the attention, but it also left her feeling vulnerable, and she was relieved to find a seat at the plush lounge at La Luna. Stephanie closed her eyes as she savored the first sip of her sugar-rimmed pomegranate martini.

She thought she imagined the heat behind her just a second before she felt a warm hand low on the bare skin on her back. Stephanie kept her eyes closed to intensify her senses. She felt the warmth travel up her back to the nape of her neck. Warm breath burned her skin as she heard a whisper close to her ear.

She swiveled in her chair and locked eyes with Jason. She smiled. God it was good to see him, and he looked incredible in a perfectly tailored black suit. His dark skin and features made him look almost dangerous, but those amazing eyes, that she imagined looking at her many times since, sparkled as their eyes locked. She took a deep breath and instantly relaxed. She had been anxious to see Jason, but all doubts melted as he stood before her.

Slipping off of her seat, Stephanie placed both hands on his chest and slowly brought her fingertips up over his strong shoulders to his neck and skimmed his hair. She was shocked by the spark that moved from the tips of her fingers through her body. She moved in close to Jason feeling the heat of his mouth so close to hers.

“I’ve missed you.” She whispered.

He cupped her cheek with his hand and she felt the other encircle her waist. His darkened eyes pierced hers as their lips touched. She kissed him slow, savoring every second. His kiss was instantly familiar. Memories of their Miami night came flooding back as the tip of her tongue found his bottom lip.

Jason had spent all week ensuring everything would be perfect for his long weekend with Stephanie. He was pleased he convinced her to come to Las Vegas a few days early. Jason tried not to think about a future with Stephanie. He thought he had a future with Jessica and was burned badly. This is just for fun he thought to himself as he walked through the lobby toward The Luna Lounge. Stopping in his tracks, he sucked in a deep breath as soon as he spotted her from a distance.

Stephanie sat at the bar, long legs crossed, Jason was able to make out her profile as she took a sip of her drink. He watched her, patiently savoring every detail of her exquisite form until his gaze reached her back. Her midnight blue, backless dress showcased the curvature of her body that he knew quite well.

His thoughts returned back to their night in Miami, when she was his for one glorious night. His hands curled into fists as he remembered the feel of his fingers trailing down that gorgeous back. The very last time they were together when he took her from behind. He remembered the way she arched her back and allowed her silky hair to flow over her spine. He also recalled the way he held her tight ass as he thrust deep inside of her, pushing further and deeper with each thrust until neither one could hold on any longer.

The dress hugged every curve perfectly. It was so low in the back that he tried to decide whether she could possibly have panties on. Damn. He didn’t want to have feelings for Stephanie, other than desire, but he knew it was a losing battle. She was exactly the kind of woman that could get under his skin and he knew it. But like a moth to a dangerous flame, he couldn’t stay away.

They would learn much about each other during the next five days and nights, he thought as he walked toward her exquisite form. He watched as she took a first sip of her martini and smiled to himself when he spotted the sugar rim, yes, he remembered she had a sweet tooth. As she closed her eyes, he swiftly moved in behind her and brushed her back with his fingertips. He instantly felt her skin shiver and respond to his touch. But instead of turning quickly as if by surprise, she remained still, her eyes closed and a smiled formed on her sweet lips. Her reaction to his touch and presence went straight to his cock as if those perfect lips were about to find their way to his pulsing erection.

Jason was determined to take it slow, unlike Miami, time was on their side. He had all the time in the world to explore Stephanie and to discover what made her tick.

Jason pulled away from their kiss and placed his forehead on hers looking straight into her eyes.

Stephanie ran her fingers through his hair. All she wanted to do was go back to their suite and rediscover each other.

“Let’s go,” she smiled and winked.

“Patience Stef. All in good time.” He picked up her hand and kissed the inside of her palm. “We have five days and five nights together, besides, I have a few surprises up my sleeve.”

“Okay. We’ll play it your way, but I do need to tell you something.”

“Anything, Stef, you can tell me anything.”

Stephanie leaned up to his ear and whispered, “I don’t have any panties on.”

Stephanie nodded. "But give me a minute. I need to get ready for your surprise, stay right where you are.”

Jason watched Stephanie sashay into the bathroom. He popped the cork on the champagne bottle and poured out two glasses. Why was his heart racing? He never had a problem keeping his composure with women. From the moment he first saw her in the Luna his mood changed. She had melted his usual gruff personality and he couldn't wipe the smile off his face.

His gaze darted toward her voice. Sucking in his breath, his eyes traveled up and down her body. Her long dark hair fanned across her shoulders in sharp contrast with the short white translucent baby doll negligee. Handing her a fluted glass of champagne, he hungrily surveyed her white g-string peeking through the lace. His stare moved to her taut belly and finally up to her full breasts under the soft, flowing fabric. Jason desperately wanted to pull the satin ribbon tied neatly at her sweet valley. He reached up to grab the end when Stephanie wrapped her thumb and index finger around his wrist.

"Not so fast," she said looking at him through a veil of eyelashes. 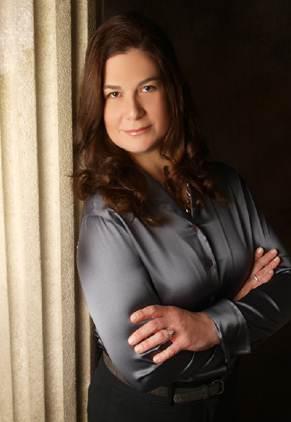 Sandra Bunino began a love of romance stories while penning a creative writing assignment in high school. The story ended with the heroine receiving a long stem red rose in her locker on Valentine’s Day. Since then, all of her stories feature the hero presenting the heroine with roses. Sandra is constantly searching for different ways to achieve a heart-pumping, stomach-flipping, breath-catching reaction from her readers.

These days, Sandra lives on a wooded mountaintop not far from New York City with her family. Living so close to the city affords her the best of both worlds and provides wonderful writing material. She occasionally pretends to be in a Sex in the City episode and has renamed her best girlfriends Samantha, Charlotte and Miranda which she blogs about often.
((

Sandra’s debut novella entitled Marooned in Miami releases in early January and she is currently hard at work on the sequel, Lusted in Las Vegas. Sandra always looks forward to hearing from her readers and she may be contacted at [email protected]

Find out more about her current and future releases, book excerpts, and a fun blog called “All Things Girl” at her website sandrabunino.com.

Mawrdew Czgowchwz by James McCourt
The Voice inside My Head by S.J. Laidlaw
The Lazarus Rumba by Ernesto Mestre
Evil Abounds: An Alpha Guardians Prequel by Wood, Vivian
Othersphere by Nina Berry
Rise of the Champion (The Sword of Kirakath Omnibus #1) by Billings, Ryne
Sweet Hell on Fire by Sara Lunsford
Marcus Agrippa: Right-hand Man of Caesar Augustus by Lindsay Powell
Infinity in the Palm of Her Hand: A Novel of Adam and Eve by Belli, Gioconda
Love Comes Home by Ann H. Gabhart