Read Mirror: Book One of the Valkanas Clan Online

Mirror: Book One of the Valkanas Clan 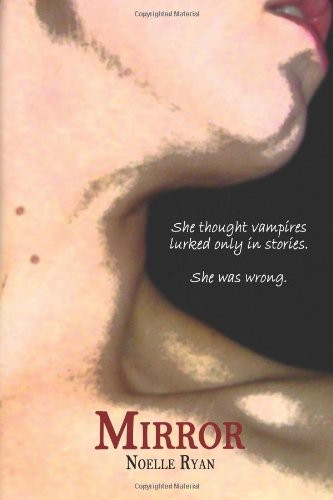 Book One of the Valkanas Clan Series

All rights reserved. This book or any portion thereof may not be reproduced or used in any manner whatsoever without the express written permission of the author except for the use of brief quotations in a book review and certain other noncommercial uses permitted by copyright law. For permission requests, write to [email protected] and include “permission request” in the subject line.

This book is dedicated to my parents, who aren’t around to appreciate it but would, I think, be proud if they were.

It is also dedicated to my husband, who is a constant source of encouragement, humor, and
zen
-like reassurance. Thank you.

This book wouldn’t have happened without the support of a number of people. Huge thank
you’s
go out to Simone and Michael for your thorough and thoughtful comments and encouragement. Thanks also to John D. for letting me draw on your superior knowledge regarding guerilla tactics and just how many fighters it actually does take to go against those encamped in familiar territory with superior numbers. Finally, thanks to my e-book publishing group for the moral support, practical information exchange, and occasional diversionary conversations, when necessary. You all rock!

I leaned back against the front door, exhausted. At least something useful had come out of this trip, and I was relieved to discover the warnings about this being a trap had proven false. I shifted my weight, my back brushing against the door knob.

And everything went black.

I swam back into consciousness slowly, heavily. As I did, sensations flashed through me. There was a sharp scratch of burlap being yanked over my head, and I spun around, hands seeking my attackers, straining to hear where they were. But I touched only a wall, heard a light brush of rubber against marble, and then there were hands on my back pushing me down the hall. I stumbled and didn’t catch myself, trying to turn my fall into an opening for escape. But before I could tear the bag from my face, I was snatched upright and shoved forward. Pain exploded against my chest as I was shoved down onto something that splintered into me, and then one sharp blow fell across the back of my neck.

Then there was only darkness, stillness, and I realized I was dead.

At the time, I didn't realize what had just walked into my classroom. If I had, I'm not sure I would have stayed to take role. But I thought only that he looked like a fairly standard Army Reserves student. I guessed him to be in his late twenties; he had buzz cut dark hair,
pecs
faintly visible beneath his gray t-shirt, muscular forearms, an intense gaze, and the classic “yes ma’am” response I’d gradually learned to accept even coming from someone clearly my age. Other than a brief appreciation of his looks and a longer appreciation of having at least one student who wouldn’t give me attitude this semester, I didn't pay him much attention. As with most of my students early in the semester, I wasn’t even definite about his name—Derek, Dylan, something like that.

I didn't become certain of his name until about two weeks into the semester, when I was walking back to my car after an evening class. We’d just spent a little over an hour and a half discussing Mary Shelley’s
Frankenstein
—the first book I assigned in every one of my general lit survey classes because, if nothing else, I could usually get them talking by asking them how the book compared to whatever movies or shows they’d seen based around that theme. Tonight’s conversation had gone into less familiar territory, however, when one of the students turned the subject to monsters in general. I didn't pull them back on topic because I was pleasantly surprised to see them all talking eagerly, a rarity in the first few weeks of any freshman class.

“Well, I think the story gets turned into so many modern versions because we’re all still
kinda
afraid of the things that go bump in the night, you know?” one girl said. This elicited a number of nods from around the room.

“Good point,” I said, trying to covertly eye my role call sheet and remember whether her name was Amy or Abigail. “Why do you all think the idea of monsters is still so delightfully frightening to so many people?”

“Maybe it’s a leftover from prehistoric times,” one student called out.

“Because danger is kind of sexy,” said another—Jayne, I was pretty sure.

“You think Frankenstein’s monster is sexy? Wow, you’re twisted,” said a third, and the room laughed.

“Frankenstein’s monster isn’t the same as a real monster,” Jayne said. “He was made by a crazy scientist; he’s not supernatural like werewolves or vampires. Those are the dangerous ones that are
kinda
sexy.” She blushed, and I found myself nodding unconsciously. I had a bit of an obsession with paranormal fantasy myself, though, as a literature professor, I rarely admitted it to my colleagues; I got tired of the patronizing looks they gave me as I tried to explain that "fantasy" was not (always, at least) a synonym for “schlock.”

Epiphany by Ashley Suzanne
The Truth of Me by Patricia MacLachlan
What Will It Take to Make A Woman President?: Conversations About Women, Leadership and Power by Schnall, Marianne
The Walkaway by Scott Phillips
Second Honeymoon by Joanna Trollope
Prue Phillipson - Hordens of Horden Hall by Hearts Restored
Misty the Abandoned Kitten by Holly Webb
The Proving by Brosky, Ken
Belka, Why Don't You Bark? by Hideo Furukawa
A Body in the Backyard by Elizabeth Spann Craig