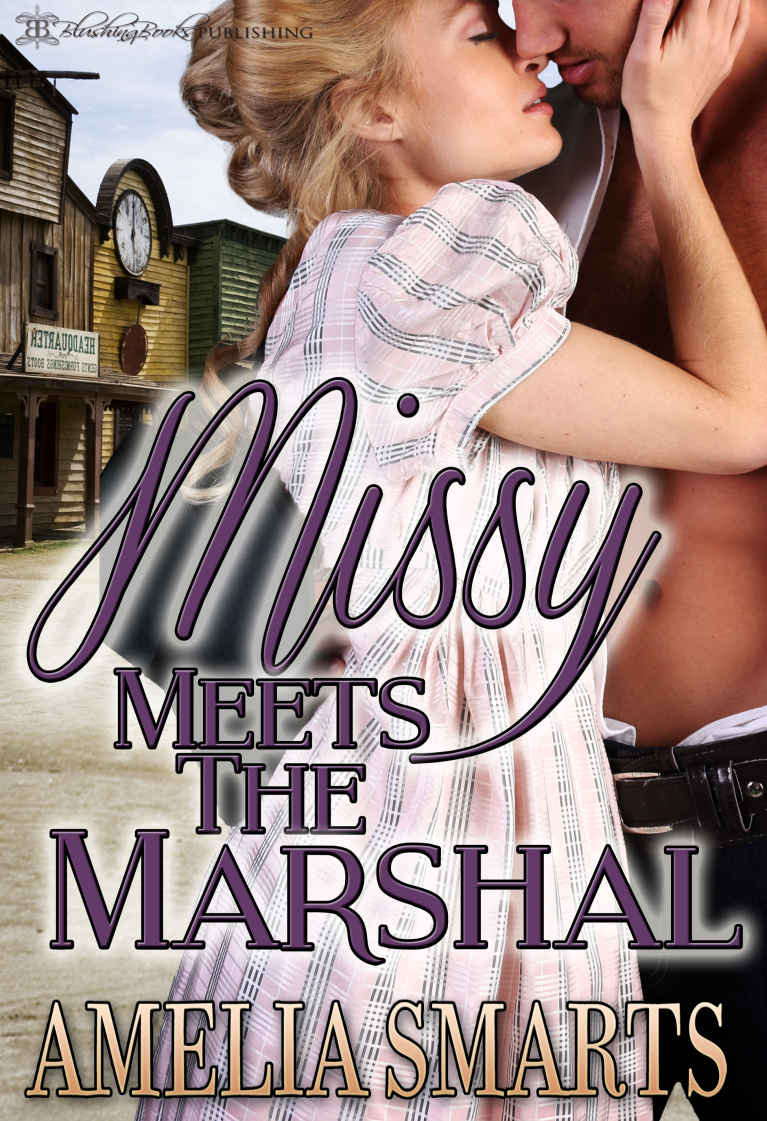 ©2016 by Blushing Books® and Amelia Smarts

No part of the book may be reproduced or transmitted in any form or by any means, electronic or mechanical, including photocopying, recording, or by any information storage and retrieval system, without permission in writing from the publisher.

is registered in the US Patent and Trademark Office.

This book is intended for
adults only
. Spanking and other sexual activities represented in this book are fantasies only, intended for adults. Nothing in this book should be interpreted as Blushing Books' or the Author's advocating any non-consensual spanking activity or the spanking of minors.

We have our own store, but we know many of you prefer to buy from Amazon, and now we’re making it much easier for you.   We’ve started a new newsletter, aimed at just our Amazon customers.

We’ll be sending out one newsletter per week, letting you know about our most recent releases.  In addition, everyone on this newsletter is guaranteed TWO free stories per month, and to sweeten the deal, we’ll be giving one person on the list

every week
.   Nothing to buy... just stay on our list and you’re eligible for the drawing.

OR use this
link
.

WOULD YOU LIKE FREE STORIES ON YOUR KINDLE EVERY MONTH?

That's right.  FREE.   And we're not talking about some short “throw-away.”   Every month, Blushing Books gives our customers two novel or novella-length stories (typically at least 15,000 words) completely free.   You can always download our current month's stories at our website, located at
http://www.blushingbooks.com
.

But we're offering an additional service for Kindle customers - we'll send the monthly free stories directly to your Kindle device.  They will also come automatically if you’re using a Kindle app on your smart phone or tablet.  You don't need to do anything, pay anything or remember anything.  Every month, free stuff will just magically appear.

1.  Email us at
[email protected]
, and put FREE KINDLE STORY in the subject line of your email.  The email address you mail FROM will not be kept or mailed in any way unless you also sign up for our newsletter with that address.

2.  In the body of your email, you will need to provide your KINDLE's email address.  Your Kindle email will end with @kindle.com.   If you do not know your Kindle email, you need to log on to your Amazon account and find it under "manage my Kindle."

3. You’ll also need to add
[email protected]
to your permitted email list on Amazon (otherwise your Kindle will not accept email from us.)   If you don’t do this step, you will not get the story.  This is also found under the "manage my Kindle" section of your Amazon account.

Once we get an email from you, you'll be added to our free monthly story list.  You'll receive two free stories per month.    And remember, if you prefer, you can always get the free material at
www.blushingbooks.com
.

Chapter 2 - Much You Don't Know

Chapter 3 - Spanked for Your Blarney and Lies

Chapter 6 - Married to the Marshal

Chapter 9 - What Fools Do

Suppertime came and went, and Marshal Grover Huntley remained at his office. The jailhouse stood near the center of Main Street in the town of Porter, Texas. Being the only official law of the town, Grover spent most of his time working. When not in the office or out on the town settling disputes, he could usually be found at his house a couple of blocks from the jail.

Grover swiveled slightly back and forth in his chair behind the wooden desk. The locked drawer to the side of his right knee contained his guns, a Colt 45 and a Derringer pocket pistol. His empty gun belt hung on a hook next to the door along with his wide-brimmed Stetson, a shade of buckskin tan that matched his trousers. The front office was sparsely furnished, containing only the marshal's desk, a few cabinets holding files and records, a clock on the wall, and a couple of chairs for visitors and suspects under questioning. A hallway in the back comprised two furnished cells and barred windows.

Paperwork was scattered across the marshal's desk in an order only he understood. He performed his last task of the evening. Straining his eyes, he stared at the photograph on each wanted poster for as long as he needed to commit the facial features of the outlaw to memory. Grover yawned halfway through the task. The sun that had brought scorching heat during the day fell out of sight, and he decided it was time for him to call it a day too. It had been a long one. He felt tired, hungry, and ready to shuck off his boots.

That's why he was less than pleased when the door swung open and shopkeeper Henry Martin barged in dragging a young woman by her arm. Henry's face flushed with excitement. Tears streaked the woman's face, and she looked at the marshal with wide, fear-filled eyes.

"Marshal, you'll want to lock up this thief," Henry said proudly. "She thought she could bamboozle me into buying this. Clearly she stole it." He placed on Grover's desk a woman's brooch, then scratched his large paunch of a stomach. His other hand still clasped the fleshiest part of the woman's arm, which was as thin as Grover's wrist.

Henry visited the jail far too often and made far too many complaints. He pointed out errors in other people's behavior with a tenacity that rivaled that of a cantankerous schoolmarm. For some reason Grover never understood, Henry believed it his duty as a citizen of Porter to judge everything and everybody. As soon as any real danger appeared, however, Henry made himself scarce. He excelled at pointing out problems, not solving them.

Grover wasn't in the mood to humor Henry. A fight between six cowhands at the Dos Aces ranch ate up most of his day and his patience, requiring him to travel a distance of twelve miles by horseback. The reason for the fight was Miss Elsie Mae, the rancher's daughter, who'd apparently offered her affections to more than one lonely cowboy. There was little the marshal could do but threaten to lock up the cowboys if they kicked up another row. As for Elsie Mae, being a woman and a flirt hardly counted as a crime, though more often than not it was cause for violence in the county, where men outnumbered women six to one.

Grover picked up the brooch Henry had slammed on his desk and was immediately struck by its heavy weight. He turned it over a couple times and determined it was likely made of pure silver. The design was of a bird perched on a branch with spread wings about to fly. Some kind of green jewel dotted the wings along the edges. It appeared to be an expensive piece of jewelry, the likes of which weren't common in their bustling but modest town. It seemed possible that Henry had finally stumbled upon a legitimate crime. The marshal turned his attention to the young woman. Her face twisted in pain, the cause of which Grover realized came from Henry's grip on her arm.

Henry released her arm. He no sooner did so than the woman pivoted and kicked him on his shin with all her might. "You beef-headed brute!"

Henry howled and bent to rub his shin furiously.

Grover coughed to muffle a laugh, then cleared his throat. "None of that in my office, young lady, unless you fancy yourself in iron bracelets."

Henry straightened. His face appeared even redder than before. "Marshal, I demand that this woman be charged with assault in addition to theft."

Grover waved his hand dismissively. "You probably did as much damage to her arm with that hold you had on it. Why don't you go on home and let me take care of this? I'll settle the matter of the jewelry. Thanks for bringing it to my attention."

Henry uttered curses under his breath and stormed out. He slammed the door behind him, which made the girl jump. She stared at the door for a bit after Henry left. When she turned her head forward again, Grover ensured that she found herself faced with his steely, unyielding gaze. He stared at her for some time, the room silent except for the ticking clock. The silence was not the least bit uncomfortable for him, but he could tell she felt anxious by the way she fidgeted. She tried to look everywhere but into his eyes, glancing at him every once in a while before quickly looking away. The silent stare was a common interrogation tactic, one Grover employed often. Often guilty people became so uncomfortable with the silence that they began yammering just to end it. Some even confessed before he said a word. The young woman, however, was not among them.

Finally, without removing his gaze from her face, he held up the brooch and asked, "Did you steal this?"

It was obvious to him that she had, but he wanted to give her a chance to answer him honestly before he accused her outright. She wore rags. They weren't even secondhand clothes, just bits of brown material stitched together to form some kind of wrap that faintly resembled a dress. She likely scavenged for the pieces in a bin outside a shop somewhere that sold fabric, her search yielding throwaway scraps that most people would consider useless. Her arms were thin and bare, and the rags barely fell past her knees. Her boots, a couple of sizes too large, were wrapped with twine to prevent them from disconnecting at the heel.

"No, I didn't steal it. It was my ma's." Her voice trembled, but there was a trace of defiance in her tone. She focused her big, blue eyes on him.

Grover sighed. So much for getting supper and going home anywhere near a decent time. Now he had to work to get a confession and figure out the rightful owner of the brooch. "Young lady, I don't tolerate lies. Confess your crime now, or your penalty will be harsher than need be."

She dared to cross her arms and glare at him. "You have no proof it isn't mine, and I told you I didn't hook it. I demand you give it back."

Grover stood slowly and meandered around his desk to where she stood. At his full height, he exhibited a much more imposing figure, especially compared to the little girl trying to glower at him. He placed his hands on his hips and scowled down at her. "What's your name?"

She lifted her head to look at him with widening eyes and took a step back, her arms uncrossing as she did. She hesitated before answering, and her gaze flitted around the room. He silently cursed his luck. He could tell she planned to give him a false name, and probably lie about anything else he asked. He held up a hand when she opened her mouth to speak.

"Never mind. I can already see that truth is not your strong suit, so I'll call you Missy until I discover your identity."

The girl's mouth shut and she blinked at him, looking wounded by his remark.

Thicker Than Blood by Penny Rudolph
Future Dreams by T.J. Mindancer
Sweet Resolve (The Lucky #2) by Jill Sanders
Cinnamon Kiss by Walter Mosley
A Seahorse in the Thames by Susan Meissner
First Night by Leah Braemel
Sweet Child of Mine by London, Billy
Nothing Like Blood by Bruce, Leo
The Journal: Fault Line (The Journal Book 5) by Deborah D. Moore
A Talent for War by Jack McDevitt