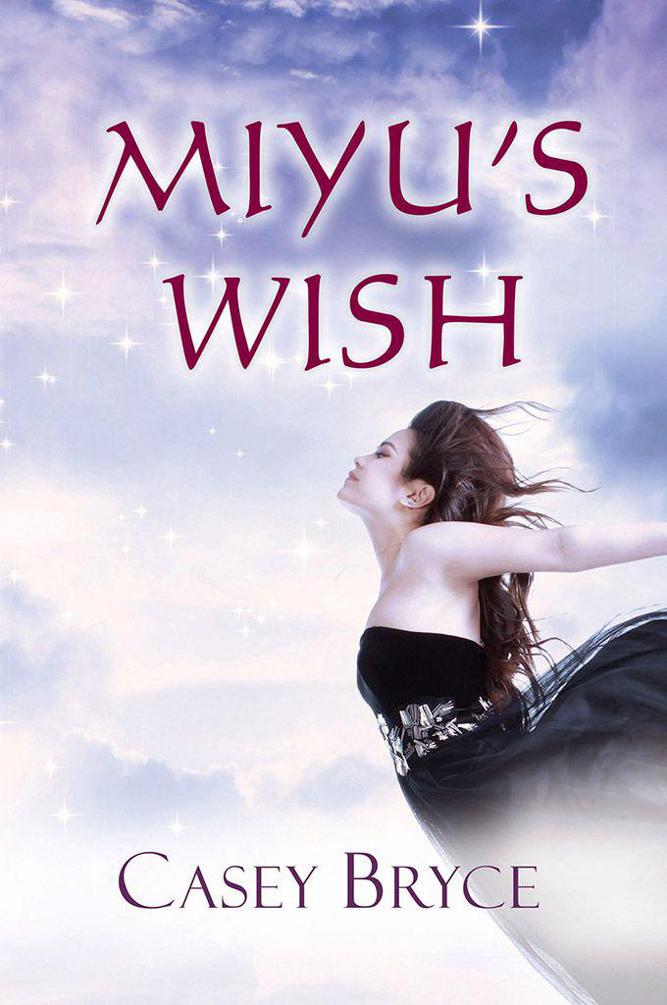 Miyu has the perfect life, but do all wishes last forever?

Perhaps her dreams hold a clue.

B
Y
C
ASEY
B
RYCE

All rights reserved. No part of this book may be used or reproduced by any means, graphic, electronic, or mechanical, including photocopying, recording, taping or by any information storage retrieval system without the written permission of the author except in the case of brief quotations embodied in critical articles and reviews.

To all those who have ever wished for something else.

T
he clock squawked, and I groaned as my eyes peeled open to the unwelcome morning. I groped for a lamp switch, and a dim light flickered on, stinging my eyes as I focused on the dresser mirror. I rolled out of bed and peered at myself—a daily ritual I wished belonged to someone else. Crooked teeth, unkempt red hair, cheeks mottled with freckles; I hated that face, and glanced longingly at the cavalcade of beautiful pop stars, sports figures, and superheroes posing radiantly on my wall.

“Keil! Get down here, now!” Aunt Gretchen’s voice wailed through the floor. “You’re going to be late!”

I rolled my eyes but knew she wasn’t joking. An angry aunt meant no dinner and abominable chores.

I hopped in and out of the bathroom, grabbed my backpack, and then rushed for the bus—barely jumping on before it pushed
away. But I was hardly lucky; a pompous laugh greeted me as my feet touched school property just minutes later.

“Your fat aunt not chauffeuring you around anymore?” Thad Tannen, the school’s resident persecutor, jeered derisively as I plodded toward the building. “Or do you have the hots for an eighth grader hiding somewhere on that bus?”

Thad’s entourage of muscle-bound pals and prissy cheerleaders all laughed in chorus, drowning out any chance for my useless rebuttal. I just shook my head and continued walking.

“Ah, leave him alone, sweetie,” I heard Kimberly, Thad’s immaculate girlfriend, say slyly. “He can’t help being what he is.”

My eyes flitted briefly in the demon’s direction, her radiant smile like fangs in my heart. I secretly yearned for her, but knew it was for naught. She’d always despise me.

I headed for Home Economics; meatloaf was on the menu today. The four girls I sat with elbowed me out of the way and did most of the work, but after it burned to toast in the oven, they promptly blamed me for the disaster. I cleaned up the mess under their demeaning watch, and then joined them in resuming our stitching projects.

One of the girls, Tamara, looked up from the malformed kitten she was creating. I groaned to myself—she was attractive in a tough, abrasive sort of way—and against all reason, I almost kind of liked her. But she clearly found me repulsive.

“So Keil,” she said dryly, her eyes practically reptilian. “Any pretty girls you’re dating these days? I bet you’re quite the tiger.”

“I date a little here and there,” I replied with a nonchalant shrug. She knew I was single.

“Really?” she persisted, her green eyes piercing me like icicles. “I haven’t seen you with anyone since…what’s her name?”

“Mary. Mary Beth,” snooty Marlene said with a smile. “She was a
real
cutie.”

The other girls giggled.

“She was a nice girl,” I stated firmly.
Something these witches would never understand.

“I could probably hook you up with Lizzie,” Marlene suggested, eliciting another round of laughter. “She’s a real sweetheart.”

I ignored her, inadvertently jabbing my thumb with the sewing needle. A drop of blood fell onto my stitching, irrevocably staining it.
That was me
, I couldn’t help but think,
a useless blot on the world
.

I met Clarence in the cafeteria for lunch. I flopped myself down across from him at a faraway table and watched him unwrap a candy bar.

He nodded; it was not uncommon for him to have his lunch stolen at some point in the morning by some cruel or hungry bully. Frowning, I offered him the peanut butter sandwich I had slopped together the night before.

“My heartfelt thanks!” he said gratefully, immediately pulling off the plastic bag and shoving half the sandwich into his mouth.

“Don’t mention it,” I said distantly, leaning back in my chair and staring at the ceiling. “I’m full of burned meatloaf from Home Ec, anyway.”

“Those girls still giving you problems?” he asked, poking a protruding crust back between his lips.

“Everyone gives me problems,” I replied grimly, glancing down the room at Kimberly and her table of cheerleader friends. They were busy laughing and chatting, brandishing their bright smiles and glossy lips—and taking their sublime lives completely for granted. Kimberly—her golden hair rolling in gentle wisps across her face—was the worst, enamoring her peers with every perky word she spoke.

I turned somberly to my friend, my words almost a whisper. “Do you ever wonder what it’s like to be
them
? You know, to be beautiful and perfect and idealized by everyone?”

I tried again. “Come on…you’ve never wished for a better life? One in which you weren’t in constant misery day after day?”

He swallowed the last of the sandwich and then frowned at me thoughtfully. “I try not to think about those kinds of things too much. High school is hell, sure, but we’ll pull through, and life will eventually get better. Our best days are still ahead, I really believe that.”

“What makes you so sure?”

“Well…” he said, rising from his chair and slinging his backpack over his shoulder. “It’s just a funny feeling I’ve gotten recently, like an answer to a prayer. You can’t lose hope.”

Gym was next, and today was fitness testing, which meant a mile run around the school’s dirt track. The coach blew his whistle, and the class shot forward. I was actually in the lead for a short time before Thad and his friend Duke caught up. They edged me off the track, sending me careening into a pool of muddy water. Coach Hightower saw everything and hurried over as I wrung a pool of black slime from my shirt.

“Get back on that track and start running!” he demanded. “The clock’s ticking!”

A clump of mud oozed into my shorts as he dangled his stopwatch in front of my face like a crazed foreman. “Just give me an F,” I muttered darkly.

Last period finally arrived; I needed to recite a poem I memorized for Literature. I had chosen Robert Frost’s “The Road Not Taken”—a piece that had always resonated with me—and stood before my classmates to begin.

“Two roads diverged in a yellow wood, and sorry I could not travel both,” I said. The sound of a long-winded fart resounded from somewhere in the classroom, but I cleared my throat and continued. “And be one traveler, long I stood—” A paper ball whizzed by my head.

I gritted my teeth and proceeded. “And looked down one as far as I could—” Several students exploded into a coughing fit.

“
To where it bent in the undergrowth—” A raucous round of burps trumpeted in chorus.

And so went the entire ordeal, my useless instructor incapable of anything resembling control. The class snickered rudely as I finished, but I ignored them and sat down with as much dignity as I could muster. At least the day was almost over.

The last bell rang, and I sidled out of school, choosing to walk home. I wandered for a long while, observing children running across yards, playing ball, or riding bikes—and couldn’t help but think of my parents. How I missed them.

You can never lose hope.

Clarence was an incorrigible optimist, but I couldn’t help but smile.

The day was growing dark, with just the faintest traces of sunlight still escaping the far horizon. I was almost home, but the
thought held no appeal; I found myself a bench inside a nearby park and gazed around, enjoying the cool night air. The area was nearly deserted, save for a comely, young mother chasing after her little boy. She was tall and graceful, wearing a frilly, white dress that fluttered behind her teasingly as she moved about. As the full moon climbed into the sky, coating everything in silver, she took on an almost ethereal quality—a goddess and her son prancing in the night. I laughed at myself.

The woman finally caught her child and, after a gentle scolding, gave him a long hug. She then turned and looked directly at me. The moonlight reflected off her kindly face, revealing a warm, understanding smile. Our eyes locked, and for an instant I wished I could be her—or someone like her—a heavenly gleam in a dark world.

I shook myself free of the strange reverie and discovered I was alone. The woman and child were gone, the park dark, and the air still. Bewildered, I glanced up at the sky; a shooting star shot across the otherwise impenetrable firmament. Even the moon was gone.

My heart thumped fast; something had changed. How long had I been sitting there? I sprang to my feet and darted home.

In what felt like seconds, I was entering my house. Everything was silent there too, but I didn’t care. I went straight to my room and, murmuring softly, fell fast asleep across my bed.

T
ufts of peach and pink drifted past me like the warbling of doves; I was but a cherry blossom flittering after a wistful song. I had escaped, but from what? I could not remember exactly, but I was happy. So happy.

You must choose
, a gentle thought sang out to me.
Become their inspiration.