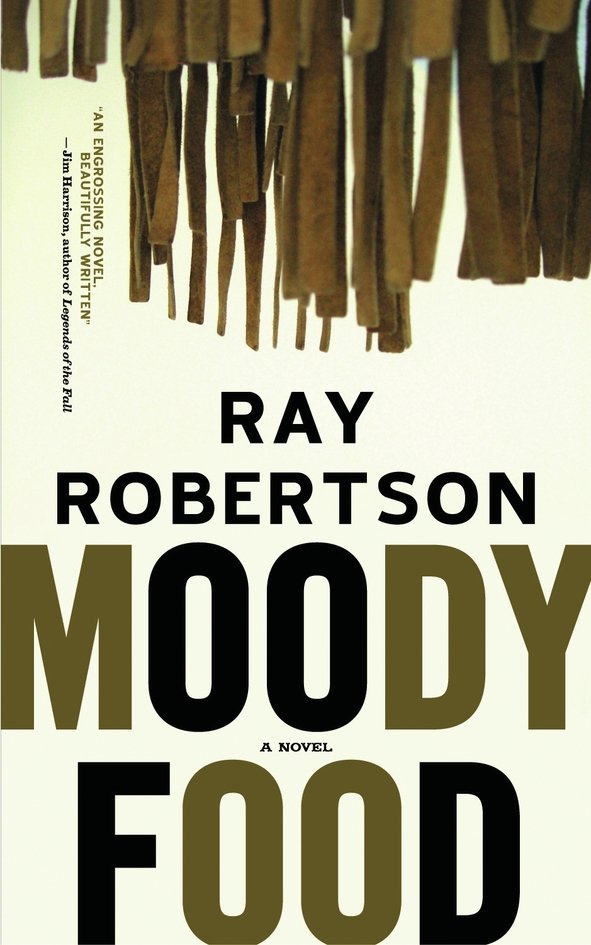 “Clever, word-drunk, and falling-down funny ... Robertson is a moral writer and a bitingly intelligent one, a man who writes with penetrating insight of what needs to be written about: beauty, truth and goodness.”

“Introducing Ray Robertson to American readers is long overdue. One of Canada's finest younger novelists, there is no better Robertson novel to start with than
Moody Food,
a textured, evocative tale of life, love, music, and inebriation in the late 1960s. Infused by the legend of Gram Parsons (here fictionalized as a draft-dodging American musician named Thomas Graham),
Moody Food
charts the grand schemes and off-kilter dreams of the Woodstock Nation's northern enclave in Toronto's hippie ghetto of Yorkville. If we thought America owned the counter-culture,
Moody Food
tells us otherwise, and does so with a wise eye on the beautiful and absurd in all of us. This is a funny, generous, touching novel by a writer of genuine gifts.”

“ ... his characters are as engaging as they are vivid. The spell of his barroom yarn never lets up ... Burning question: Will Ray Robertson and his book make the cover of
Rolling Stone
?”

“Riotous and tender, funny and sad,
Moody Food
is as good an elegy for the counterculture as we've seen. The question, âWhat if someone were to write a 60's rock novel worthy of its subject' need no longer be asked.

“A giant jukebox of a book,
Moody Food
is the moveable feast of that Found Generation which evolved into the mythic Hippie Nations. Canadian wunderkind Ray Robertson has written a syncopated celebration packed with pure peddle-steel sex and fiddle-assaults on the soul, with moans, weeps, and rainy day Delta blues that make a broken heart seem like an attractive option. Mr. Robertson is the Jerry Lee Lewis of North American Letters and he makes writing a book seem like ringing a bell.”

--Chuck Kinder (author of Honeymooners and
The Last Mountain Dancer)

“
Moody Food
has the vibrancy of
The Sun Also Rises,
but instead of Pamplona, we have Toronto's Yorkville in the 1960's. It's a tale of idealism gone awry, of dreams going off the rails, of life catching up with those who live it at too rapid a pace. Robertson's ability to catch the mood of the times is uncanny.
Moody Food
simply bursts with the life of the street.”

“Ray Robertson is one of Canada's finest novelists.”

“Among the most talented of a younger flight of Canadian novelists.”

“There is much to admire in
Moody Food.
The novel is filled with a keen wit and emotional robustness, coloured with a gradually building sense of dread (and inevitability, for those familiar with Gram Parsons' story). While Robertson is obviously working within the parameters of the Parsons mythos, he is not bound by it, and he fills in the broad outlines with a richness of detail and originality that is staggeringly impressive. What elevates
Moody Food
from the merely good, however, is Robertson's skill at writing about the music. Robertson doesn't merely describe the music from outside. Instead, he enters fully into the flow of the songs, recreating them for the reader with an often heartbreaking clarity and a seeming effortlessness that belies his incredible skill. There are moments in
Moody Food
that are, quite literally, breathtaking. It's an amazing reading experience, and one which you owe it to yourself to explore.”

“Robertson writes sentences that require response, syntactic celebrations that rattle in your brain, long after reading them ... a style and sense of humour reminiscent of word-drunk authors like Barry Hannah, Thomas McGuane and Leon Rooke.”

“Robertson is among the most ambitious Canadian novelistsâand one of the few not working from a middle-class agenda.”

A Best Book Selection of the
Globe and Mail
and the
Vancouver Sun. 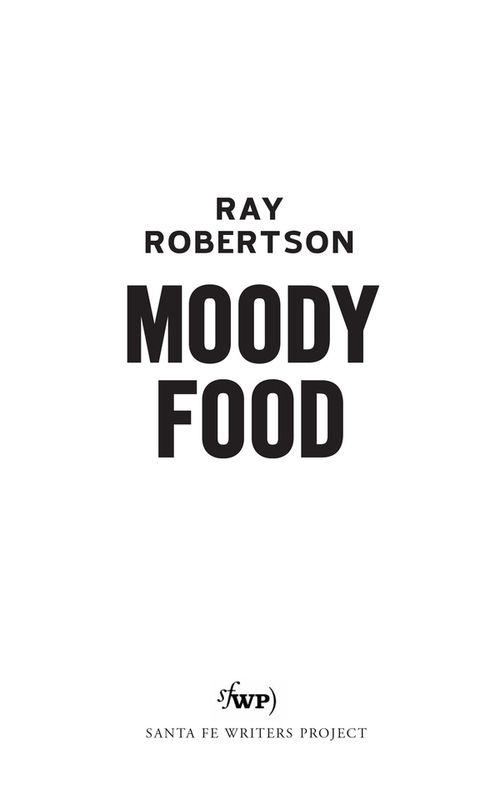 All rights reserved. The use of any part of this publication, reproduced, transmitted in any form or by any means electronic, mechanical, photocopying, recording or otherwise, or stored in a retrieval system without the prior written consent of the publisherâor, in the case of photocopying or other reprographic copying, a license from the Canadian Copyright Licensing Agencyâis an infringement of the copyright law.

Cover design: Bill Douglas at The Bang
Printed and bound in Canada

Published in the United States by
Santa Fe Writers Project

Give me some music; music, moody food
Of us that trade in love.

Chicken-legged Thomas Graham, all white flesh and thirteen years old, in the huddle, on one knee, giving out the signals, in charge.

Mid-signal call, Thomas puts his mouth to the earhole of the helmet next to him, helmet belonging to Gary “Fat Man” Jones, Thomas's best friend and sure-handed fullback. Whispers:

“Hear that? Hear the cheerleaders?”

And Thomas Graham, football tucked underneath his arm, runs the other way, runs alone right, runs for his life, runs right into a wall of half of Jackson Central High's opposition that afternoon, the All-Mississippi high-school runners-up of the year before, the Oxford Panthers.

Hit high, hit low, hit hard, loudly hit, the ball pops loose at first point of pounding contact and sputters uselessly out of bounds, Thomas's collarbone snapping in two in the process as easy as someone keeping time to a catchy tune snapping happy his fingers.

On his back, arms and legs splayed, the bars of his helmet stuffed full of home-field turf and with a mouth full of blood and broken teeth like Chicklets floating in warm red syrup: “Oh, that's pretty,” Thomas says, the cheerleaders on the sideline hitting all the high notes now, really cheering their boys on.

“That is just so pretty,” he says.

I MET THOMAS GRAHAM in a bank. He was withdrawing, I was depositing.

Fall hadn't managed to elbow out of its way yet all the humidity and baking haze of September lingering summer, but I'd decided to brave heatstroke anyway and broken out my buckskin jacket and slid into the friendly snug of my favourite pair of Levis. Impossible, I've always maintained, to be the best you can be when you're not wearing pants. Maybe this is northern prejudice, or maybe I'm just unnaturally sensitive about my legs. Anyway, there I was in my jacket and jeans.

And there was Thomas. In white cowboy boots and a red silk shirt with a little silver cross peeking out underneath, all topped off with a white jacket covered with a green sequined pot plant, a couple of sparkling acid cubes, and a pair of woman's breasts. The jacket glowed, I swear, and I'd had nothing stronger that morning than a cup of coffee. He was also the only other guy in the bank in blue jeans and with hair hanging down past his collar.

They'd given him some kind of form to get started on while he waited in line, and he was squinting and grinning at the thing like it was written in a language he couldn't quite understand but for some reason was getting quite a kick out of anyway. Probably high, I thought. He looked up at me from the piece of paper and blew a few brown strands of hair out of his eyes.

“Now that, sir, is one
fine
article of clothing,” he said, lifting a long thin finger, pointing at my fringed jacket.

It took me a second to recover from the jolt of his southern accent. “There's a place over near Kensington Market,” I said. “Good stuff. Cheap, too.”

“Much obliged,” he said. Using the pen he'd been given by the bank, he scribbled down what I'd just told him on the back of
his hand. Information recorded, “Thomas Graham,” he said, offering his hand.

“Pleased to meet you, Bill.”

A blue-haired teller signalled that it was Thomas's turn at the counter. Thomas gave me a wink and loped right up. “Afternoon, ma'am,” he said.

Later, after counting out my $23.50 monthy loan payment and signing my receipt, I noticed Thomas with the teller and some obviously important higher-up at the bankâhe had to be important: he was balding and wearing an expensive suitâjoking and laughing like old friends. At one point the man in the suit actually clasped Thomas by the shoulder to give him a paternal squeeze. My own teller sourly tore off her part of the carbon receipt and didn't thank me for being part of the Royal Bank family.

I had to walk right past him to escape the bank's partitioned maze, and Thomas turned away from the two behind the counter and put a hand on my arm. “Hey, Buckskin Bill,” he said, “Uncle Owsley says thanks for the tip.” He stuck out his hand. “See you around?”

I smiled, shook his hand, and didn't open my fist until I was well down Avenue Road.

When I did: two tabs of Owsley acid. Everyone who prided himself on being in the know knew about Owsley Stanley, the mad chemist of San Francisco's Haight-Ashbury. But here I was actually holding a couple of his legendary powder kegs.

Won't Christine be blown away? I thought. And wait until I tell her about the guy who gave them to me.