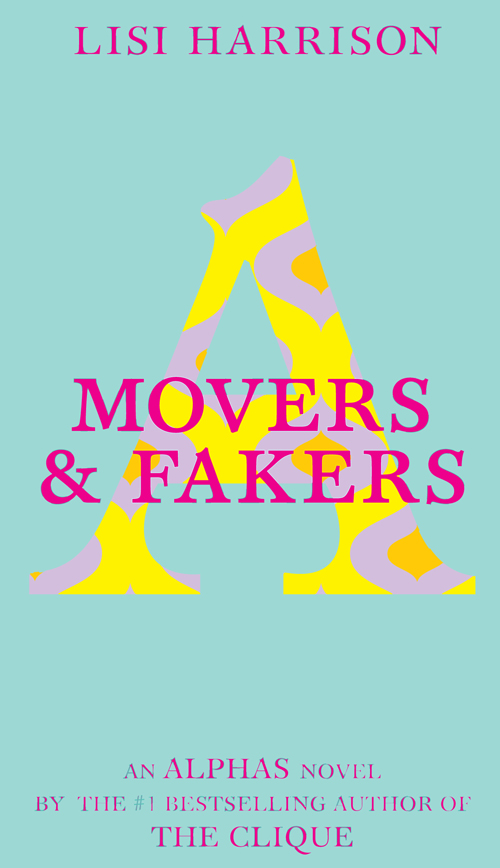 THESE BOOTS ARE MADE FOR STALKING

Other novels by Lisi Harrison:

The
Poseur
series by Rachel Maude

The
Secrets of My Hollywood Life
series by Jen Calonita

Poppy is an imprint of Little, Brown and Company

The characters and events in this book are fictitious. Any similarity to real persons, living or dead, is coincidental and
not intended by the author.

A Preview of
My Little Phony

“Ready?” Charlie turned to her copilot in the passenger seat and shot her brows skyward, excitement twinkling in her almond-brown
eyes. She still couldn’t believe where they were, strapped into a Personal Alpha Plane, each zippered into a gold Alphas flight
suit with an inspirational quote embroidered along the left sleeve.

Adventure is worthwhile in itself.

Allie’s vivid green eyes met Charlie’s. In the light-flooded airplane hangar, they were the exact color of a lime-flavored
Jelly Belly. “Can’t we just sit here a little longer?” she pleaded, her voice pinched and wavering. Panic-induced perspiration
trickled down her porcelain temples like rain on a sidewalk. Charlie examined Allie’s profile—ski-slope nose, full rosebud
lips, and wide eyes ringed by a perfect fringe of doll-length lashes—and wondered for the millionth time how such a pretty
girl had ended up with the confidence of a wet rag.

“No can do, Al. We only have half an hour till class,” Charlie reminded her trembling friend. She scooted back against the
squishy silver pilot’s seat and clicked her safety belt shut, the buckle forming a chunky platinum
A
.

The golf-cart-size plane looked like a giant Plexiglas soap bubble—it was perfectly round and totally translucent. Charlie
was appropriately bubbly herself. She clenched and unclenched her fists, her hands hovering over the touch-screen control
panel like she was Beethoven. She scanned her surroundings, making sure they were cleared for takeoff.

All around the launchpad, technicians in white jumpsuits and Brazille Enterprises caps were busy making adjustments to the
other ninety-nine PAPs.

“Maybe we could do this another time, then?” Allie asked, still trying to weasel her way out of the adventure. She ran a hand
through her shiny jet-black hair and cocked her head hopefully at Charlie.

Charlie put a reassuring hand on Allie’s jiggling knee. “Don’t you want to be the first Alphas to take one of these babies
out for a spin?”

At the elite Alpha Academy, where both girls had managed to survive a month, doing things
first
and doing them the
best
was everything. After all, Shira Brazille’s school for exceptional writers, dancers, artists, and inventors was full of girls
who had been best and first their whole lives.

“Of course, but this thing is teeny! My Chanel makeup palette is bigger than this.” Allie squirted some Purell into her hands
and nervously rubbed them together. She stared out the window at the shiny rows of planes lined up in air formation like marbles
in a game of Chinese checkers. “Did Shira really say we could be here?”

The billionaire mogul had called Charlie into her office last night and grudgingly told her that she’d earned a ride in a
PAP for having received the first patent at Alpha Academy. Charlie was on the inventor track at school, and she had just trademarked
a prototype for saliva-activated nail polish that changed colors based on the pH levels in a person’s mouth. Shira predicted
the Lick Slicks line of polish would be a major seller for her cosmetics company, X-Chromosome. Charlie had been overjoyed
until Shira congratulated her for “dumb luck” by applying existing technology in a “somewhat clever” way.

Charlie and Shira had a more tangled history than Mark Zuckerberg and Facebook’s other cofounders: As the daughter of Shira’s
former assistant, Bee, Charlie had known the international sensation since she was in diapers. A talk-show host whose ratings
rivaled Oprah’s, Shira was the CEO of not just Brazille Enterprises but various subsidiary companies. She was a household
name from Irvine to Indonesia. Over the course of Charlie’s life, Shira had become one of the richest, most powerful women
in the world. And since day one, she’d also persisted in overlooking Charlie’s accomplishments.

“And she said I could bring anyone I wanted. If I’d known you were going to wuss out, I would have picked someone else,” Charlie
said teasingly.

Lately, Alpha Academy had felt more like a maximum security prison than a school for phenomenally talented girls. Charlie
longed to take off and get some breathing room for a few minutes to escape the pressure-cooker vibe. And she knew that once
Allie was in the air, she’d feel better, too.

“Don’t worry. I know what I’m doing.” Charlie pulled out her aPod (the glittery rectangle that kept the students of Alpha
Academy connected to one another—but not to the rest of the world—and served as a personal remote control for all of the island’s
technology). The round portals on either side of the plane squeezed shut with a sucking sound, and a map of the @-shaped island
appeared on the control screen in front of her, with a blue dot blinking in the launchpad area.

“That’s us,” Charlie said, pointing at the dot and grinning. She refastened the bobby pin that held back her shaggy brown
bangs and prepared for liftoff.

Thanks, Mom,
Charlie answered in her head. Usually, hearing Bee’s voice was like getting hit on the head with a Nerf bat—momentarily bewildering
and kind of unpleasant but not seriously dangerous—but today missing her mother didn’t even enter her mind. Today was all
about having fun with her new friend.

“If we go down in flames, I want you to know I heart you,” Allie said, smiling tightly and gripping the gel-filled arms of
her seat hard enough to turn her knuckles white.

“You’ll heart me even more when we’re airborne.” Charlie giggled.

“Now entering air space,” Bee informed them as the plane floated smoothly and silently off the ground. Because the carbon-neutral
plane ran on a combination of electricity and corn syrup, the cabin was eerily silent; without any jet engine noise, the only
sound was the gentle whir of the climate-control system blowing lavender-scented AC across their foreheads.

“Uhmuhgud.” Allie loosened her death grip on the armrests and wound her pale arms around one of Charlie’s olive ones, squeezing
Charlie like two slender boa constrictors.

“Not bad, right?” Charlie grinned, resting her mocha-brown eyes on Allie before moving them back to the control panel.

“Wow.” Allie smiled, relaxing back into her chair as the bubble floated upward. “This is almost… peaceful.” Her green eyes
immediately unsquinted, and her lips uncurled from their terrified grimace to their usual puffy
O
.

“Antigravity technology.” Charlie nodded. “Makes for a smooth ride. Pioneered by NASA for space-testing astronauts. Perfected
by Brazille Enterprises for Alpha Academy.” In this case, Brazille Enterprises meant Charlie Deery, but Charlie didn’t want
Allie to think she was bragging. And if Shira ever found out how much of the design was actually Charlie’s, she would be sent
packing faster than a bachelorette after a rose ceremony.

“Here we go!” Charlie whispered with delight as the top of the hangar cracked open like an enormous plastic Easter egg to
let them through. Blinding desert sunlight streamed in through the plane’s curved windshield, and Charlie took out two pairs
of aviator shades from a compartment in the armrest, handing one to Allie and putting the other pair on herself. Shira really
had thought of everything.

Just as they were clearing the hangar’s octagonal edge, a white camera attached to the ceiling blinked on and angled its lens
toward the plane, focusing on them like a personal wink from Shira.
Gotcha!

“I know,” Charlie sighed. “Ah-noying.” Ever since Charlie temporarily dismantled the security system to help her bunk-mates
meet up with the BBBs (the Billionaire Brazille Boys, Shira’s five sons and the island’s most forbidden fruit), Shira had
added hundreds of new cameras and amped up security. The slightest infraction would send an Alpha home, and Shira was watching
everything
.

“At least she hasn’t figured out how to float cameras in the sky,” Charlie said, finding the silver lining in their floating
cloud.

She gasped as the plane rose higher; the @-shaped island at the center of a deep blue
faux
cean constructed where the Mojave Desert kissed Nevada still had the power to impress her, even though she’d helped build
the thing.

Sliding a finger over the map, Charlie steered the plane higher and headed east. Below them, beneath açaí palms, Joshua trees,
and the scrim of wild jungle overgrowth, were the twenty houses where one hundred Alphas slept, studied, schemed, and suffered.
Each glass-domed rooftop glittered like a snow globe and sported the signature of a different inspirational woman. They passed
Virginia Woolf, Michelle Obama, Oprah, Martha Stewart, J. K. Rowling, Mother Teresa, and finally their own house, Jackie O.
Farther out, past Shira’s house and the rest of the buildings, gleaming white beaches sparkled against clear blue water.