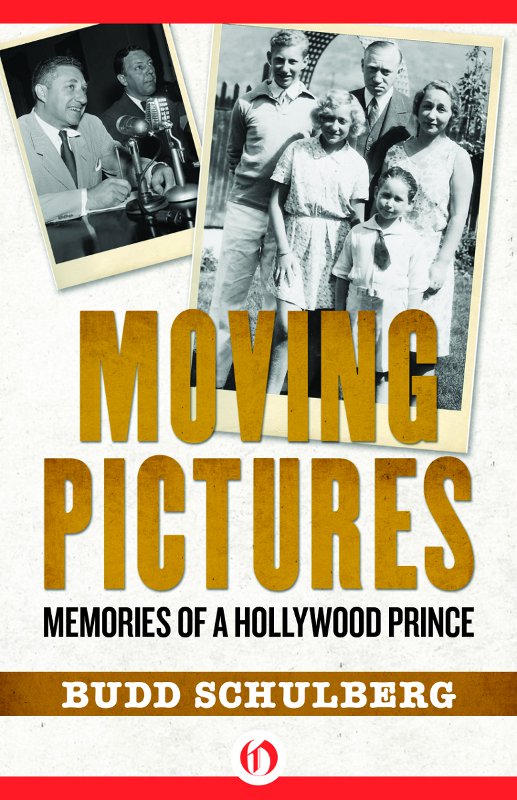 and for Sonya and Stuart,

A Biography of Budd Schulberg

Edwin S. Porter, the director of
The Great Train Robbery,
with an early version of the film projector

Jerry Mayer and B. P. Schulberg patting the head of a lion badly in need of a hairdresser

B. P. Schulberg and Ad,
circa
1927, on a trip through the Panama Canal

Ad and her three children, Budd, Sonya, and Stuart,
circa
1928

Ad on the Schulberg tennis court,
circa
1928

Star William Gargan in
Living on Love;
the clipped corner indicates this still was killed by the Hays office because of this nudity

The three Schulberg children,
circa
1929

A rare photo of the entire Schulberg family

A letter to Budd from Clarence Darrow

The 1930 wedding of two of Hollywood’s “noble” families: the Mayers and the Selznicks

Budd Schulberg at about the time he left for Dartmouth

B
ETWEEN ME AND
my childhood is a wall. I struggle with some half-remembered incident, and it is like a loose stone in the wall. The loose stone may be a chance word or a dimly remembered face, the faintest fragment of a memory. I work at that fragment with the fingers of my mind, until I am able to pull it out and hold it in my hands. Now it is a little easier to loosen another stone, and another, until I have made a hole large enough to crawl through. On one side of the wall is a man in his sixties who has seen almost everything—marvelous days when life cries out
Yes Yes Yes
! with Molly Bloom, and days so dark that I begin to question Faulkner’s Nobel confidence that man will endure. On the other side of the wall is the infant who has seen almost nothing except fingers and toes and the dim boundaries of an airless room.

To tell my story from the point of view of the infant who becomes the child, the youth, and the adult is to employ a familiar literary device but one that has never seemed altogether scrupulous to me. But to write it from the hindsight, the so-called wisdom which is really that of the navigator making corrections for errors, is equally unsatisfactory. The one-year-old lives on in the man of sixty-odd and the sixty-odd was there in the frightened one-year-old who didn’t know where he was or why he was; the mind is the same one, merely battered, challenged, and improved. This is not the complete story, the accurate replay, this is only what the one-year-old, and all the progressive years that inhabited the body identified as
budd schulberg,
have been able to piece together. I am
my own team of archeologists digging down in time, and the memories are scattered shards, a haphazard collection until they are assembled. If sometimes the four-year-old thinks or talks like a man of sixty, or the sexagenarian sounds more like a child of four, you may charge that to the inevitable failures in the methods of personal archeology. Or to the failure of this sort of dichotomous collaboration.

So I invite you to follow me through the wall. Peer into the door of the splendid New York apartment house on 120
th
Street, facing Mt. Morris Park, where I opened my eyes for the first time. I was in a small, Victorian-cluttered bedroom of a three-room apartment off Fifth Avenue in a comfortable middle-class section of upper Manhattan called Harlem. The young Jewish doctor who lived in the building handed me to my mother, Adeline. Barely out of her teens, weighing only ninety pounds, she was frail, sensitive, and pretty in that wistful Mary Pickford-Lillian Gish way that was the style before the flappers displaced them in the Twenties. Young Adeline had been carried across the ocean in her mother’s arms, the Jaffe family on the run from the Cossacks who terrorized their native Dvinsk, the lowly village-sister of Minsk and Pinsk that was in Poland or Sweden or Germany or Russia as the tides of history changed the flags but not the bottom-dog status of the Jews in the ghetto near the river Dvina. Practically all Adeline could recall from that brief period was a trip to St. Petersburg with her mother Hannah, escorted by her uncle, a diamond-cutter to the Czar, one of the few Jews allowed to enter that hallowed Russian Orthodox capital. There Grandmother Hannah woke in terror. In a nightmare she had seen a plague settle over Dvinsk, killing her children. When she took the next train back she found that her dream had been a subconscious flash of reality. An epidemic had swept through the ghetto and the three children next in age to baby Adeline were dead. Hannah’s best friend who lived in the adjoining cottage had lost all her children and had drowned herself in the well.

The tragedy triggered Hannah’s decision to join her husband in America. Grandpa Max had gone on ahead to try and plant a few seeds of security on which the Jaffe family could depend if they were able to reach that mysterious new world. Now Hannah’s Brother-the-Diamond-cutter used his money to bribe the border guards. An underground railroad said to be financed by the Rothschilds moved the Jaffe family, Hannah, the two older sons Joseph and David, and the infant Adeline, into Germany, Amsterdam, Liverpool… where somehow they
found their way into one of those overcrowded steerage holds where they rocked and pitched, threw up and prayed, wondered and wearily waited in pursuit of a dream they had not yet learned to call American, a dream that took them to the cluttered narrow streets and the dark and crowded tenements of the Lower East Side.

Adeline’s father, Max, was one of the tens of thousands of lost souls transplanted from Russian ghettos to their American equivalent. At least on Madison Street there were no Cossacks to come charging into their village and burn their huts. And no pogroms. Only a harsh and hostile metropolis that dared them to struggle to survive. Grandpa Max ran a humble luggage store, the poor selling to the poor, and lived in a dream world of pious poverty. He was one of the nondescript army of Jews without money, who lived for their Sabbath ceremonies and the protective socializing of the synagogue.

My paternal grandfather, Simon, had only one thing in common with Grandpa Max: poverty. For some mysterious reason, Grandpa Simon emigrated to Bridgeport, Connecticut (where my father was born), then found his way to Manhattan’s Lower East Side. While Max spent every moment he could spare from his home or the luggage shop
davening
in the synagogue, Simon never went to
shul.
Instead, to the horror of my paternal grandmother, Sarah, he took to drink. He would spend his days and nights in the riverfront saloons with the Irish bums, loafers, sailors, and petty hoodlums.

This singular grandfather, it seemed, had also adopted the splendid belligerence of the Irish. Because he had a round, ruddy face and refused to wear a beard, the barflies did not hesitate to speak their minds on the subject of “the dirty Jews” infesting the neighborhood. This was just what Grandpa Simon was waiting for. “I’m a Jew meself!” he’d announce with an ethnic pride the Irishers considered their own special province. Then he’d challenge them to come outside. Adeline remembers Grandpa Simon returning home, staggering from booze and punches, but proud of the walloping he had given “them anti-Semits.”

As I grew a little older I always knew what Grandpa Max was doing because I could see him doing it, languishing sadly in his rundown luggage store, or presiding proudly in the synagogue. But Grandpa Simon’s life was a mystery. For years, as I became interested in our little stump of a family tree, the more I asked “What did my grandfather do?”, the less satisfactory was the answer. “Oh he … he was a … he did all sorts of things, he …”

“But what did my grandfather do?” I would beg of my mother, my father, and other relatives. One day, years later, Father finally broke down and told me: “Buddy, your grandfather—well, I suppose you’d have to call him a bum. He never held a regular job. He’d pick up a dollar a day as a sandwich man—a fellow who walks the street with a sandwichboard slung around his neck—‘Eat at Joe’s’—a human billboard. That’s all I can tell you.” Apparently Grandpa’s life-style was to take that hard-earned buck, slap it down on the bar of the corner saloon, and nurse his five-cent beer while waiting for the next anti-Semitic remark.

Between Grandpa Simon bending his elbow in the saloon and Grandpa Max rocking back and forth in his beloved synagogue, there was very little money coming in to either the Schulberg or the Jaffe family. But, as with so many second-generation ghetto children, there seemed to be some special spark burning in Ben Schulberg and Adeline, who became childhood sweethearts. Ben enjoyed school and was soon bewitched by the sound of the English language. The brightest boy in his class, he was singled out to go to Townsend Harris, then the model high school in Manhattan. There he won a prize for the best short story by a schoolboy in the city of New York. Adeline also loved books and dreamed of becoming a librarian. Ben went on to City College, and began reading through the English classics. But with Grandpa Simon unable to provide anything but his daily beers, help was needed to put food on the table and Ben had to go to work. Luck brought him a job as a copyboy for Franklin Pierce Adams, the eminent “F.P.A.,” conductor of “The Conning Tower” column in
The New York Mail,
which was to be read even more widely when Adams moved on to
The World.