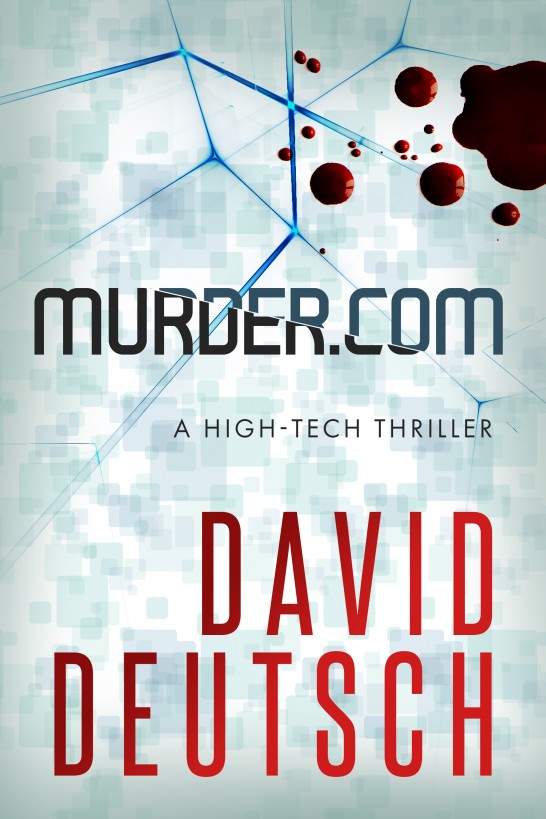 Sign up for our newsletter to be the first to
know about our new releases!

This ebook is licensed for your personal
enjoyment only. This ebook may not be re-sold or given away to
other people. If you would like to share this book with another
person, please purchase an additional copy for each person you
share it with. If you're reading this book and did not purchase it,
or it was not purchased for your use only, then you should return
to smashwords.com and purchase your own copy. Thank you for
respecting the author's work.

For Judah and Bea

Acknowledgements:
A huge thank you to Gemma and Jackson for believing in and bringing
Max Slade and Imogen Whitehall to life.

I had just walked through the door
of my house, kicked off my shoes, poured myself a generous four
finger scotch, and sat down on my couch when there was a knock at
the door.

"Did you see what happened?" my
neighbor asked, pushing her way into the house.

"What? How could you have missed
it?" she asked, staring and waving her hands at me.

I excused Imogen's rude behavior
mainly because she was dressed in a slim-fitting outfit
accentuating her fantastic body, and, more importantly, she had a
lovely English accent. Not to mention I was in love with
her.

"Max, the house down the block.
The police are all over the place."

"What the heck happened?" I asked,
taking a sip of Glenfiddich 18.

"You really are clueless
sometimes."

"Well, I need a bit of liquor in
me before I'm thinking clearly."

"What happened? How could you have
missed it? Something big, around the corner!"

I let this information pour over me as my second sip
of scotch warmed a path down my throat.

"Did you hear what I just said?"
Imogen asked.

"I live here. It was hard to miss
the screeching sirens. Come on!"

Imogen pulled my arm, almost making me spill my
drink. I grabbed my coat and my drink, threw a leash on my black
lab Jabber, and we all strolled down Seymour Drive. When we came
around the corner, about a quarter of a mile down the road, I saw
police tape boxing in the understated colonial mansion. How had I
missed this? There were official emergency vehicles everywhere,
flashing lights, and uniformed men darting every which way. A white
van was in the process of unloading an empty gurney.

"Looks like we just made it," I
said, standing with Imogen behind the police tape.

"Do you know whose house this is?"
Imogen asked.

"You could say that. I've had a
history with him over the years."

I indeed had a history with Ted.
We were both venture capitalists. Very good ones. And ones that ran
in the same circles. Although I tried to limit my circle time with
him.

Imogen and I, along with a few other neighbors,
milled around just outside the yellow-taped perimeter. After
chitchatting with some people whom I had never met, nor seen
before, nor had any desire to see again, I waved over one of the
uniformed police officers.

"What happened?" I
asked.

"There was a death in the house.
You a neighbor?" he asked, walking over, one hand resting on his
holstered weapon.

"Yes, I live around the corner. Is
there anything that I should be worried about?"

"As I have told some of your other
neighbors, nothing you should be concerned about."

"Well, I see some guys running
around here in suits. I'm no cop, but they certainly look like
detectives to me."

"Move back, sir." The cop sternly
directed me with his words and his hands. This conversation was
over.

Every time I'd ever asked a cop
what had happened, they have never answered. It was always
nothing to see here, move
along
. They were all the same. They never
wanted to open up.

We hung around for a few more
minutes, saw a gurney—no doubt the one that we saw when we arrived,
now with a white sheet covering a body being loaded into a white
van. One of the neighbors had told me that a man had died.
Apparently, he had gotten further with the police than I had. I
knew that had to mean Ted. He had lived there alone with his wife.
We watched the door shut. The show was over. I wasn't going to hang
around and chat with the neighbors any more than I already had, so
we decided to head back to my place.

When we arrived home, I let Jabber off her leash and
poured myself a drink.

"What do you think happened?"
Imogen asked, concerned, watching me fix my second scotch of this
short evening.

"If I had to guess, I'd say that
Ted was murdered."

Once they threw the sheet over
your body and you were loaded into one of those white vans, you
usually didn't make it out for dinner. I was confident we wouldn't
be visiting Ted in the hospital anytime soon. And I could not care
less.

"Oh my!" Imogen raised her hands
to her mouth. "Why in the world would someone do that?"

"I could give you ten reasons off
the top of my head," I said, walking over to my couch, ready to sit
down.

Imogen glared at me. "Max, you're
such an asshole sometimes. Don't you care?"

"Sure I care. But I figure he's
out of his misery."

Imogen stared at me as if bewildered. Just about to
sit, I decided to head back over to the bar in the corner of my
living room.

"How can you just stand there
stone-faced? You said you knew the guy."

"I know a lot of people, my dear.
Scotch on the rocks?"

I knew her drink. After five years of dating, I
should. But I liked to ask. I liked the banter. It kept the romance
alive.

"Ah, yes." I mixed the drink and
brought it over to Imogen. "Have a seat," I said, motioning over to
the white Italian leather art deco couch adorning my retro living
room.

Money could buy you a lot of
things. Not all of them nice. The one thing it couldn't buy you was
taste. Luckily for me, I had both. But some of the people around
here were lacking on the taste front. They decorated their homes
like they lived in a manor house. I couldn't stand stuffy, stately
looking rooms. Never could. I was not landed gentry. I didn't have
a valet, footman, cook, and scullery maid. No use pretending that I
was. I wouldn't be fooling anyone.

Imogen sat, took a sip of her drink, and put her
feet up on the ottoman while staring at the pitch-black television
screen. I sat down next to her, put my feet up, and took a long sip
of my scotch.

"Who would do such a thing?"
Imogen asked.

She looked puzzled. She looked concerned. There was
nothing to worry about. Ted was dead. And, I hated to say it, the
world was a little bit better of a place.

"Perhaps things will become a
little clearer in the morning. Care to discuss it over breakfast?"
I asked.

My phone rang. I answered it,
excusing myself from Imogen's company, and walked into the
kitchen.

"I need your help," the voice on
the other end of the phone said.

Kitty. She was alive. Which meant
it was indeed Ted who was dead. Why on earth would she be calling
me? I would assume she'd be a tad occupied at the moment.
Considering her husband had just died.

"How did you get my
number?"

"I saw you outside of my house.
Can you help me?"

"I'm not sure what kind of help
you need, but surely you need to talk to the police
first."

"I already did that. I need to
talk to you."

"Then go ahead and
talk."

"Not tonight. I have
company."

Dutch. She never called me by my name. I took a sip
of my drink. It was much better than this conversation.

"I'll be over tomorrow morning,"
she said, and disconnected our call.

I strolled back into the living room.

"You staying a while?"

I didn't know why I bothered to
ask. That was typically what lovers did. They spent the night. But
I liked to pretend I was still on the chase for her affections. She
liked to play hard to get.

"Well, why don't you kick off your
shoes and get comfortable." Imogen was halfway through her first
drink.

"I know you mean that in the best
possible way, my dear." I leaned over and gave her a
kiss.

Imogen woke me around nine in the
morning. I was lying soundly in my bed, wrapped in my down
comforter—a cozy cocoon. I was barely awake, quite content to make
this morning a leisurely one.

"That means I have to get out of
bed to eat it."

"If you think I'm bringing you
your breakfast in bed—"

"I wouldn't have it." I started to
rise. "Certainly not after you took all the trouble to make
it."

I figured that French toast, eggs, bacon, and hash
browns were best eaten at a table.

Jabber was standing by the side of the bed, nose
cold as ice, nuzzling my leg, tail wagging. I reluctantly pushed
the covers off me, exposing the inner sanctum of my warm sanctuary
to the elements. Rolling into a seated position and wiping the
sleep from my eyes, I gave her a pat on her head as I stood.

I met Imogen in the kitchen. Jabber followed me.

"Cereal? That's what you cooked
up?"

"Who said I cooked
anything?"

Annoyed that I would be dining on cereal with soy
milk, since Imogen forbade me from bringing dairy into the house
due to her dairy allergy, I sat down at the table. She joined
me.

I'd gotten used to soy. Or maybe
I'd just convinced myself that I'd gotten used to soy. Imogen has
claimed that I could, indeed, bring dairy into the house. She's
even gone so far as to purchase it. But why bother? If she was
allergic to it, I didn't need it. Sure, soy didn't taste like milk.
And it certainly didn't taste like cream in my coffee. But we all
must make sacrifices for love. Mine just came at the expense of an
enjoyable breakfast.

"I did make coffee," Imogen
said.

"Gold star for you."

A Time to Kill by Geoffrey Household
County Line Road by Marie Etzler
The Irish Revolution, 1916-1923 by Marie Coleman
She's Me by Mimi Barbour
BURN IN HADES by Michael L. Martin Jr.
Lucy Muir by Highland Rivalry
The Calendar of New Beginnings by Ava Miles
Off The Clock by Kenzie Michaels
Naughty Nine Tales of Christmas Crime by Steve Hockensmith
Broken Halo by Marcel, Zoey