Read My Name Is Not Angelica Online

My Name Is Not Angelica

O'Dell, Scott
My name is not Angelica / by Scott O'Dell.
p cm.
Summary. Relates the experiences of a young Senegalese girl
brought as a slave to the Danish owned Caribbean island of St. John
as she participates in the slave revolt of 1733â1734.
ISBN 0-395-51061-9
[ 1. SlaveryâVirgin Islands of the United StatesâSaint Johnâ
Insurrections, etc.âFiction. 2. Saint John (V.I )âHistoryâ
Fiction. 3. BlacksâFiction.] I. Title
PZ7.0237My 1989 89-1864
[Fic]âdc19 CIP
AC

In the writing of
My Name Is Not Angelica,
I talked to librarians and teachers on the islands of St. Thomas and St. John and to the descendants of slaves who lived through the revolt of 1733â1734.

The island of St. John was discovered by Columbus in 1493. It passed from hand to hand among the Spaniards, the Dutch, the British, and the French until the year 1717, when it was settled by the Danes. Two hundred years later they sold the island to the United States.

Besides numerous scholarly papers, I found most helpful Westergaard's
The Danish West Indies Under Company Rule;
Jadan's booklet
A Guide to Natural History of St. John; Night of the Silent Drums
by John Anderson, who spent thirty-five years of research on this fine novel; and the splendid books of the explorer Basil Davidson,
Black Mother: The African Slave Trade, The African Genius,
and
The Lost Cities of Africa. 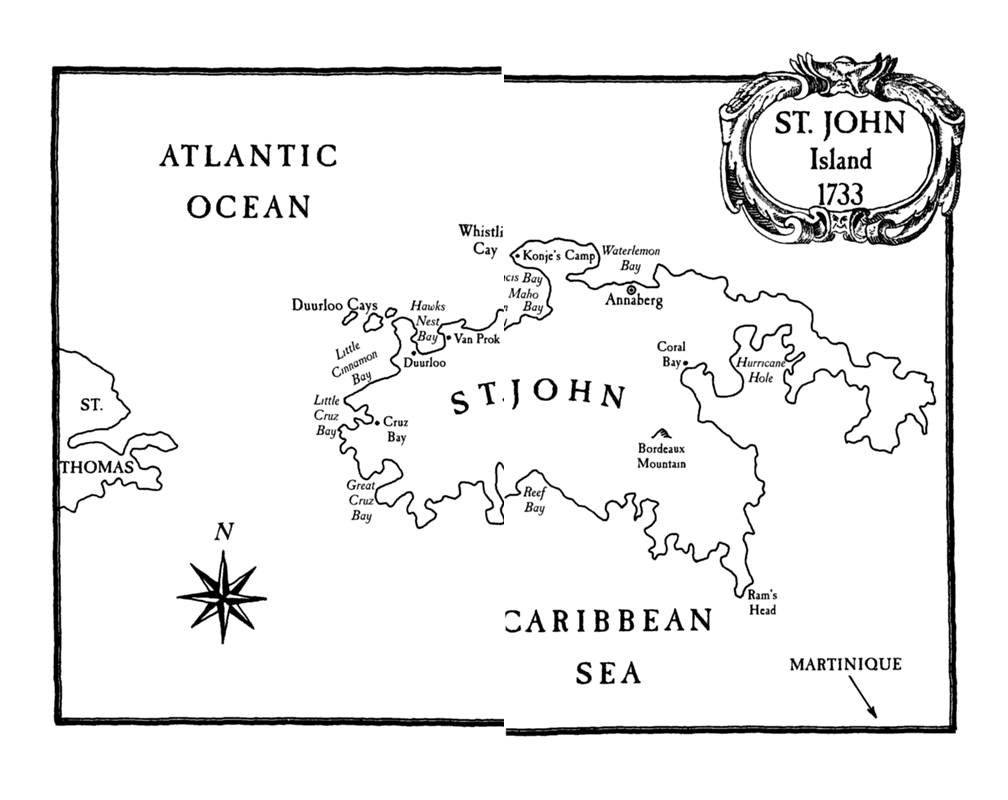 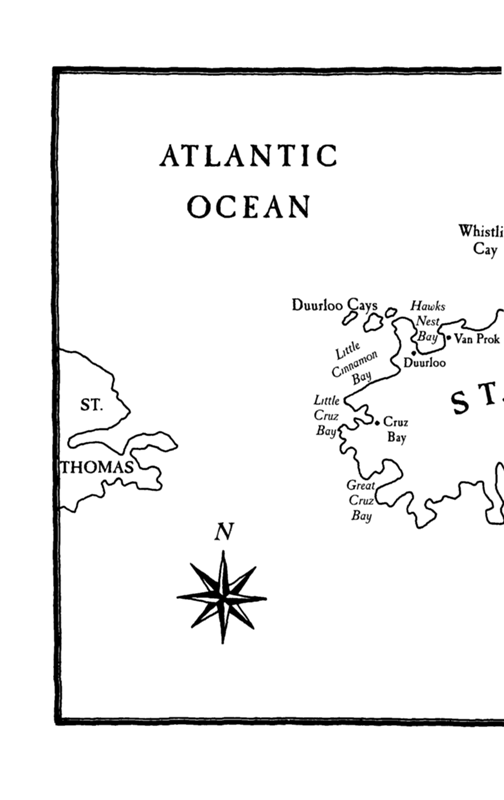 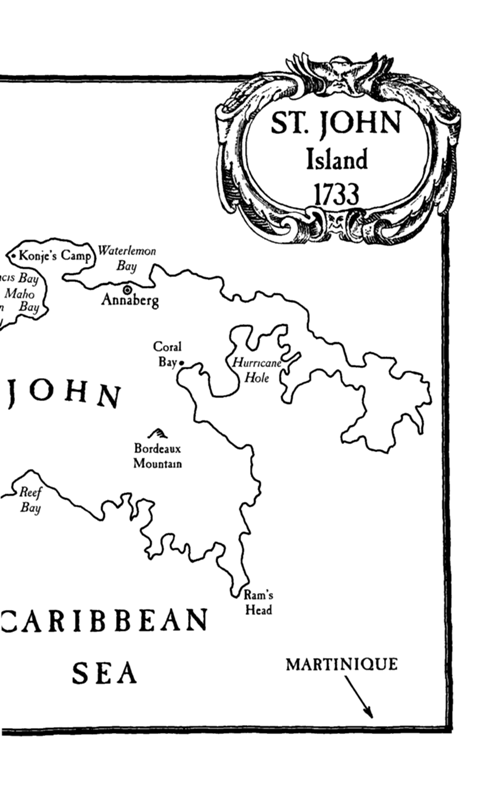 Late in the summer King Agaja sent out ten of his five hundred women guards. They came down the river in a war canoe. They wore golden shifts, loops of moonstone beads, and silver rings, but each of them carried a cutlass.

I stood beside my father at the river's edge, holding my sister's hand. I was sixteen and tall for my age, but I felt like a child beside these giant women as they strode toward the ceiba tree where Konje waited. They looked like ten giant statues come to life.

The leader spoke to Konje in a queenly voice. "King Agaja," she said, "King of Zamboya, Emperor of Lands to the West and East, has learned of your father's death. The news has saddened His Majesty. He fears that the friendship between Zamboya and Barato will languish and die."

My father, Tembu Motara, the chief counselor of Barato, squeezed my hand as the word "friendship" was spoken. Never was there any friendship
between King Agaja and Konje's father. No one in Barato had ever seen the king. His merchants had never traded with us.

The leader went on. "In order that this friendship will not end, His Majesty will give a feast ten days from this day, to which you and your court are invited."

In his deep voice, my father replied, "Please inform His Majesty that in the spirit of friendship we accept his generous invitation."

The leader, towering over us all, looking beyond us, said, "His Majesty will be pleased that he will have the good fortune to entertain you and your court."

Without more words, to the tinkling of bracelets, she led her warriors to the canoe and quietly they set off up the muddy river. She waved and the village waved back.

"The invitation surprises me. What do you think of it?" Konje asked my father.

"We go to the feast, of course. But before we go, we think hard. The flood has changed things. Barato is no longer seven villages hidden in the wilderness, far from the river and the sea."

Last April, when it rained nights and days for
weeks, our mighty river changed its course. In a great loop, it rushed away from the country King Agaja ruled and left him without a harbor. The river's new course washed out one of our villages and most of our palm forest, but miraculously we were now on the sea.

"King Agaja has lost his harbor," my father said. "Now he has to send his goods through Barato. What's on his mind is very simple. He doesn't want to pay us a tax on the goods he'll ship, even a small tax."

Konje knew little about business. "What does the king send?"

"From lands beyond the mountains where the river begins. But he collects them from everywhere. Each year he sends more than six thousand to Spain and Portugal. To other countries also."

"We cannot collect a tax on slaves," Konje said. "I do not like the idea."

"It's the most profitable tax of all. King Agaja would pay us a tax for every slave he sends out. And a tax on what he is paid in returnâa musket, lead, and barrels of powder. You'll be rich in a short time."

"You own slaves. I own slaves. All the elders own slaves. What's the difference between our slaves and those that King Agaja sends?"

"Ours are well treated, a part of the family. Of the slaves that are sold, I have heard, many are roasted over hot fires and eaten."

The sun was going down in a bank of rain clouds. A cool wind wandered in from the harbor. Servants came with a string of horses. It was the time of day when Konje and his lordly friends rode off to the grasslands, beyond the swamps and the palm forest that surrounded us, to hunt wildebeests and panthers.

The beribboned horses caught Konje's eye. He clapped his hands like a child and hummed a tune. He chose a beautiful spotted mare, leaped on her back, and began to circle the tree where my father and I stood. He rode slowly, sitting straight on his gold-trimmed blanket.

His eyes were fixed on me. He wanted to make sure that I was watching. I watched while he made two slow circles of the big ceiba tree. "Raisha, do you like the horse?" he said.

We would not be married until he was thirty years old. Now he was only twenty-seven. That was the law of Barato. It was never broken. He liked to tease me. Once I teased him. I hinted that one of the elders had asked me to marry. But both of us knew that our hearts were joined forever.

Days after the women warriors left, King Agaja sent canoes filled with flowers, with night-blooming cereus, pink jungle ferns, and frangipani. Our village ran down to the river to meet them.

Warriors, who spread the flowers under the ceiba tree, and a grizzled dwarf got out of the canoe. He waddled up the pathway and stood stiffly in front of Konje.

"Flowers of friendship," he said in a piping voice. "A gift from King Agaja to the women of your court."

Konje was startled at the sight. He couldn't think of anything to say. He had to do something to repay King Agaja. But what? He glanced at my father, who looked away, a signal meant to calm him. But Konje went on. He sent a servant to the counting house. The man came back with a gourd of river pearls that shone like the moon as it sets at the break of day.

"With pleasure I send King Agaja these pearls of friendship," Konje said.

The dwarf smiled showing gold teeth. "His Majesty will be pleased, also the women who will wear them." He pressed the pearls to his chest. "How many of your beautiful guests will we have?"

"Ninety-three from this village," Konje said. "From the other five villages, I don't know. It is harvest time with them."

He excused himself and went to a papa drum sitting among the trees, the big one made of a hollow log covered with goatskin. He beat on the drum with his hands and talked to the nearest village. Then he talked to the rest of the villages, beating the big drum with a rhinoceros horn.

Numbers came back quickly. He added them to the number from our village and told the dwarf that he would come to the feast with one hundred and eight guests, possibly a few more.

"As many as you wish," the dwarf said. "His Majesty has just given a month's shelter to a caravan from Ethiopia of more than two hundred merchants."

Konje ran a hand through his bushy hair. He frowned. Again he glanced at my father. I was sure that he wanted to make another gift. He had given pearls to the women of Agaja's court. Must he make a gift to King Agaja himself?

Again my father cast a cold eye at Konje and turned away. He was very careful with money. In
a big book bound in zebra hide he put down all the money that came into and went out of our six villages. And as the chieftain of Barato, until the day Konje reached the age of thirty, he would keep a tight rope on the spoiled young man.

Rain began to fall. Warriors leaped out of the canoe and held mats over the dwarf, as if they thought he would melt away. He touched his forehead to the ground and bowed himself to the river. He faced Konje as he went, yet I noticed that he cast a long look at the bamboo wharf the Elders were building at the mouth of the river.

From his canoe, he called out, "In three days I will meet you at the gates of Malai, be it day or night."

True to his word, he was there three days later, wrapped in folds of scarlet cloth that sparkled with jewels, with two rows of naked guards that stretched from the river bank to an odd-shaped hill some distance beyond.

Up this pathway, between the two rows of guards glistening in the heat, the dwarf led the way. Konje walked behind him and the rest of us followed Konje. The sound of trumpets and little tan-tan drums came from somewhere.

On both sides of the path were streets straight as arrows faced with mud and straw huts, half of them in ruins. Men crowded the street, carrying stones.

Between the rows of guards, the pathway led
toward a stone cliff. Circles and triangles and zigzag lines were painted on its face in glittering colors.

The pathway began to narrow. The top of the cliff turned outward and hung above us. We left the guards behind. Suddenly we were in a walled, cavelike place. The pathway went no farther. Over our heads was a glimpse of blue sky and a white cloud.

The dwarf, speaking in a gentle tone, placed us against a wall. A basket came down through the hole over our heads.

But the top was far, high as ten men. There were more than a hundred guests, yet servants lowered the basket and pulled it up before the dwarf had finished telling Konje how many invaders had tried to climb the cliff and failed.

"Not just one cliff protects the king," he said. "Cliffs surround the palace on every side. Most of the invaders are slain at the river. Those who reach this far go no farther."

The Zombie in the Basement by Giangregorio, Anthony
Albrecht Dürer and me by David Zieroth
The Secret Life and Curious Death of Miss Jean Milne by Andrew Nicoll
Wicked Flower by Carlene Love Flores
Holistic Beauty from the Inside Out by Julie Gabriel
Liverpool Daisy by Helen Forrester
150 Vegan Favorites by Jay Solomon
Deadly News: A Thriller by Zooey Smith
Fading Away (Hardest Mistakes #1) by Dannielle Wicks
Guilty Thing by Frances Wilson