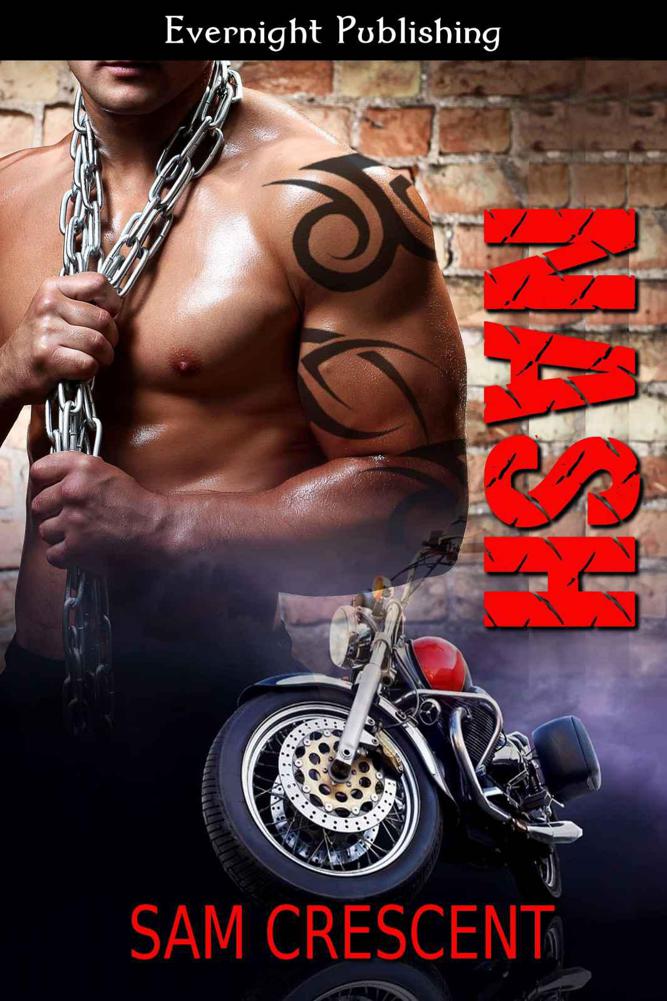 WARNING: The unauthorized reproduction or distribution of this copyrighted work is illegal.  No part of this book may be used or reproduced electronically or in print without written permission, except in the case of brief quotations embodied in reviews.

I want to say a big thank you to my editor, Karyn White. Without her Nash wouldn't be the story that it is. She is amazing and is always willing to help me improve my craft, thank you.

Also, a huge thank you to my readers. You're all wonderful and I hope you fall in love with Nash like I did.

S
nitch sat back in the warehouse he’d taken control of watching his men screw the whore they’d found on the city streets. The owner of the warehouse was dead at his feet surrounded in a puddle of blood. The little fucking weasel had been trying to fob him off with the Darkness accounts. He ran the club that moved from city to city, partying and doing whatever the fuck he wanted to do.

Throwing his cigarette onto the body, he gave the deceased another firm kick to the ribs.
The only plan the little shit could come up with was Fort Wills. The Darkness, his motorcycle group, was running on fumes. The drugs were being delivered outside of Fort Wills, and no one wanted to touch him or his crew. Fucking Tiny. That bastard, the leader of The Skulls, had been a thorn in his side for as long as he could remember. Snitch let out some more steam, kicking the fucker on the floor while also imagining it was Tiny’s body. Fort Wills had been taken from him many years ago, and he’d been biding his time to get it back. Then this little shit had been trying to make out he didn’t know what Snitch and the boys needed. Darkness had every intention of getting the fucking town back but not until the right moment.

“
The dude is dead,” Battle said, sitting beside him. The other man’s trousers were unbuttoned.

“The whore any good?” Snitch asked.

“No. She’s dry as fucking shit.” Battle tipped his beer back, taking a long drink.

“When are the other
s going to get here?” Snitch wasn’t interested in the whore anymore. The last twenty years he’d been waiting to get his town back, and he was so close he could taste it.

“Scars has everything we need
, and the other boys are doing their stuff. You shouldn’t have killed Rupert there. He was a good way to get into Fort Wills.” Battle pointed at the dead body.

“I don’t care what he was offering me
. Telling me I should take Fort Wills was the final straw.” He spat back at the body, hating the effect Rupert had on him.

“I’m just saying this is no way to keep a low profile. You’re so close to getting what you want, boss.”
Battle sounded a little too serious for Snitch’s liking.

“This is going to work. Rupert
was a loose end. We’re going to get what we always wanted, and then you’ll be laughing at this moment.” Snitch lit up another cigarette and checked the clock. The sounds of moaning were driving him crazy. He wasn’t in the mood for fucking. The only thing he wanted was the shit to bring The Skulls down and take over the town he had once owned.

Thirty minutes later Scars and several of his other men were walking in. They were dressed in regular jeans, their hair shaved off
, but they wore pussy caps. No one would have suspected the men were part of a biker club.

“What you got?” Snitch asked, standing up.

“Gold.” Scars was the one who answered. “Get rid of her.”

The woman was gone within minutes
, and the light was trained on the table. All the beer bottles and cigarettes were on the floor from Snitch swiping his hand across the table.

“
This is the layout of the town.” Scars showed the layouts with the pictures he’d taken. Everything was clear, and Snitch found himself remembering the good old days of his time in the small town. Then his memories went back to Tiny, and the anger was back. He would use anything to take on the town.

“The cops leave them alone. They’re nothing more than civilians with badges. They do fuck all.” Scars pointed at the men
, none of whom Snitch recognized. “Their security is weak. They’ve been rebuilding everything since the druggies tried to take over.”

Scars explained everything Snitch already knew. The damage that had been done to The Skulls was legendary. Most of the biker groups within the vicinity had heard about it.

“Moving on from the town and shit. They’re still tight, and all of them are together.” Scars started to put photographs on the table. “Tiny is the leader as we all know. Getting to him is not going to work, especially with Alex in the mix with them all.” Snitch saw the Vegas casino owner, and his anger turned to outright rage. With each name spoken Scars put down a photograph to associate with the name. “Lash, Nash, Murphy, Butch, Zero, Blaine, and Steven are the closest we could find. They’re the key to getting Tiny. Then we’ve got their women. Angel is married to Lash. Tate, Tiny’s daughter, is with Murphy.” Snitch snorted. He could only imagine how Tiny took that. “Eva is the other woman who is in Tiny’s life. I don’t know how she is connected to Tiny, but there is a connection. Then we’ve got the surrounding women, Kelsey, Sophia, and Sandy. There are more women, but these seem to be the ones of importance. Then you’ve got the three leftover Lions who are on the outskirts. I don’t think they’re really trusted.”

“I’ve got a question,” Kite said. He was a younger member and only interested in pussy and dope.

“What?” Snitch asked, annoyed with the interruption.

“
Why do we think we’re going to work when another group, The Lions, tried to overthrow Tiny and failed, and then the druggies tried and fucking failed? The Skulls are untouchable.”

In the next breath, Snitch put his fist in Kite’s face, shutting him up.

Pointing at the picture of the women, Snitch started to speak up. “The Skulls’ weakness is their women. We hit them where they least expect it.”

“We take out their women?” Scars asked.

“Yeah, we take out their women. Also, we’re not going to go in all guns blazing. We’ve got a plan. The Lions and the druggies went in without a plan. They tried take over. No one can take over from The Skulls unless you take them down one by one.”

“What about Chaos Bleeds? Tiny will call for them,” Battle said, mentioning the only other m
otorcycle club who was close to Tiny.

“They won’t be a problem. They’re nowhere near us. Last I heard they were tracking down a whore,” Snitch said. He always kept an eye on the surrounding clubs.

“I also looked into the other thing you asked,” Scars said, producing a couple of pictures. “These men will be the perfect front to do what we need.”

Snitch stared at the pictures of murderers, rapists
, and other criminals. “Do you think they’ll work for us?”

“They’ll work for money and a chance to get away from the system,” Scar
s said. “They’re what we need.”

“
Contact them, tell these fuckers the score.” Snitch tapped the picture with the name “Gill” on top. All of the men in the pictures looked vicious. If they caused a problem for him Snitch would end them.

“They follow my orders. No one dies until I know what is going on. I’m the one in charge.” Slamming his fist down on the table,
Snitch felt the stirrings of arousal. He was going to get his town back, and Tiny was going to get what was coming to him.

Nash stared up at the ceiling
, but he couldn’t see a thing in front of him. Everything was blurry as the coke he’d just inhaled went straight to his brain. Kate’s supply, which he’d found within her belongings that Sophia had given him, hadn’t lasted long. The shit he’d found by beating one of the local drug dealers in the next town over was sending him in a spin. Fuck, if he didn’t get his shit together, Tiny was going to out him. The club had few rules, but one of the few rules was no drugs. They transported the shit, but they never took the stuff. He lay on his bed, his mind going a mile a minute and his body bursting with energy. The high was always so addictive, and he loved it.

Running a hand down his face, he couldn’t stop giggling. The drugs were the most fun he’d experienced in years.
Not even being balls deep in pussy could compare to the rush of being high. His thoughts turned to Sophia, the one woman he could never have.

Go back to her. Don’t take no for an answer.

Even as the thoughts entered his mind, Nash cut them off. He wasn’t going to be some kind of fucking pussy by chasing a bitch. Forcing himself to forget about her, he brought himself ‘round to the high he was currently experiencing. To think he’d missed out on all this shit by staying in control to follow in his father’s and brother’s footsteps. The Skulls had been his life for as long as he could remember. There was nothing else he wanted to do with his life other than be a Skull. However, he wanted Sophia and could no longer have her because of the fucking drugs. At least that was one of the reasons he couldn’t claim Sophia.
Fuck!
All the problems were crashing down on him, threatening to crush him. Nothing was going to spoil his high. No wonder Kate loved drugs. He saw the attraction.

Since I Saw You by Beth Kery
Past All Forgetting by Sara Craven
Taking the Bait: An ARC Operatives Romance by Audrey Noire
The Butterfly Garden by Danielle Greyson
The Skating Rink by Roberto Bolaño
Invisible by L.A. Remenicky
Wyatt: Return of the Cowboy by Cathy McDavid
Blind to Betrayal: Why We Fool Ourselves We Aren't Being Fooled by Freyd, Jennifer, Birrell, Pamela
Violet by Rae Thomas
The Redeemer by J.D. Chase