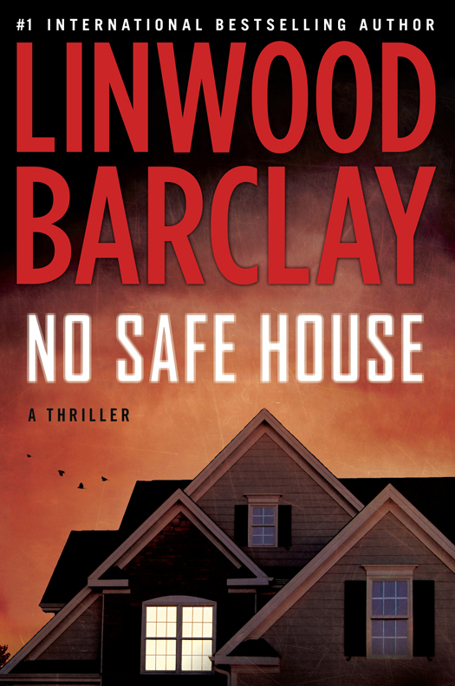 A Tap on the Window

Too Close to Home

No Time for Goodbye

All rights reserved. The use of any part of this publication, reproduced, transmitted in any form or by any means electronic, mechanical, photocopying, recording or otherwise, or stored in a retrieval system without the prior written consent of the publisher—or in the case of photocopying or other reprographic copying, license from the Canadian Copyright Licensing Agency—is an infringement of the copyright law.

Library and Archives of Canada Cataloguing in Publication is available upon request.

Published in Canada by Doubleday Canada,
a division of Random House of Canada Limited,
a Penguin Random House company.

RICHARD
Bradley had never thought of himself as a violent man, but right now he was ready to kill someone.

“I can’t take it anymore,” he said, sitting on the side of the bed in his pajamas.

“You’re not going out there,” said his wife, Esther. “Not again. Just let it go.”

Not only could they hear the music blaring from next door; they could feel it. The deep bass was pulsing through the walls of their house like a heartbeat.

The Bradleys had lived in this modest Milford home, on this hundred-year-old street with its mature trees, for nearly thirty years. They’d seen neighbors come and go. The good, and the bad. But never had there been anything as bad as this, and it had been going on for a while. Two years back, the owner of the house next door started renting it to students attending
Housatonic Community College over in Bridgeport, and since then the neighborhood had gone, as Richard Bradley liked to proclaim on a daily basis, “to hell in a handcart.”

Some of the students had been worse than others. This bunch, they took the cake. Loud music nearly every night. The smell of marijuana wafting in through the windows. Shattered beer bottles on the sidewalk.

This used to be a nice part of town. Young couples with their first homes, some starting families. There were some older teenagers on the street, to be sure, but if any of them acted up, threw a raucous party when they were left on their own, at least you could rat them out the next day to their parents and it wouldn’t happen again. At least not for a while. There were older people on the street, too, many of them retired. Like the Bradleys, who’d taught in schools in and around Milford since the 1970s before packing it in.

“Is that what we worked so hard for our whole lives?” he asked Esther. “So we could live next door to a bunch of goddamn rabble-rousers?”

“I’m sure they’ll stop soon,” she said, sitting up in bed. “They usually do at some point. We were young, too, once.” She grimaced. “A long time ago.”

“It’s like an earthquake that won’t end,” he said. “I don’t even know what the hell kind of music that is. What is that?”

He stood up, grabbed his bathrobe, which was thrown over a chair, knotted the sash in front.

“You’re going to give yourself a heart attack,” Esther said. “You can’t go over every time this happens.”

“I’ll be back in a couple of minutes.”

“Oh, for God’s sake,” she said as he strode out of the bedroom. Esther Bradley threw back the covers, put on her own robe, slid her feet into the slippers on the floor by the bed, and went running down the stairs after her husband.

By the time she caught up with him, he was on the front porch. She noticed, for the first time, that he had nothing on his feet. She tried to grab his arm to stop him but he jerked it away, and she felt a twinge of pain in her shoulder. He went down the steps, walked down to the sidewalk, turned left, and kept marching until he reached the driveway next door. He could have taken a shortcut across the grass, but it was still wet from a shower earlier in the evening.

“Richard,” she said pleadingly, a few steps behind him. She wasn’t going to leave him alone. She figured there was less likelihood that these young men would do anything to him if they saw her standing there. Would they punch out an old man while his wife watched?

He was a man on a mission, mounting the steps to the front door of the three-story Victorian home. Most of the lights were on, many of the windows open, the music blaring out for all the neighbors to hear. But it wasn’t loud enough to drown out the sounds of raised voices and laughter.

Richard banged on the door, his wife stationed at the bottom of the porch steps, watching anxiously.

“What are you going to say?” she asked.

He ignored her and banged on the door again. He was about to strike it with the heel of his fist a third time when the door swung open. A thin man, maybe twenty, just over six feet tall, dressed in jeans and a plain dark blue T-shirt and holding a can of Coors in his hand, stood there.

“Hey,” he said. He blinked woozily a couple of times as he sized up his visitor. Bradley’s few wisps of gray hair were sticking up at all angles, his bathrobe had started to part in front, and his eyes were bugging out.

“What the hell’s wrong with you?” Bradley shouted.

“Excuse me?” the man said, bewildered.

The man’s mouth formed an O, as if trying to take it in. He looked beyond the man and saw Esther Bradley, holding her hands together, almost in prayer.

She said, sounding almost apologetic, “The music is a bit loud.”

“Jesus,” Richard said, shaking his head. “I was over here last week, and the week before that! You got any brain cells left?”

The young man blinked a couple more times, then turned and shouted back into the house, “Hey, turn it down. Carter! Hey, Carter! Turn it—yeah, turn it the fuck down, will ya!”

The young man shrugged apologetically, said, “Sorry.” He extended his free hand. “My name’s Brian. Or have I told you that before?”

“You want to come in for a beer or something?” Brian asked, cheerily raising the bottle in his hand. “We’ve got some pizza, too.”

“Thank you for the offer,” Esther said cheerily.

“You’re, like, the people in that house, right?” Brian asked, pointing.

“Okay. Well, sorry about the noise and everything. We all had this test today and we were kind of unwinding, you know? If we get out of hand again, just come over and bang on the door and we’ll try to dial it down.”

Brian shrugged, then slipped back into the house and closed the door.

Esther said, “He seems like a nice young man.”

They returned to their house, the front door slightly ajar from when they’d run out of it in a hurry. It wasn’t until they were both inside and had closed and bolted the door, that they noticed the two people sitting in the living room.

A man and woman. Late thirties, early forties. Both smartly dressed in jeans—was that a crease in hers?—and lightweight jackets.

Esther let out a short, startled scream when she spotted them.

“You shouldn’t leave your door open like that,” said the woman, getting up from the couch. She wasn’t much more than five-two, maybe five-three. Short black hair, worn in a bob. “That’s not smart,” she said. “Even in a nice neighborhood like this.”

“Call the police,” Richard Bradley said to his wife.

It took a moment for the command to register. But when it did, she started for the kitchen. The moment she moved, the man shot up off the couch. He was a good foot taller than the woman, stocky, and swift. He crossed the room in an instant and blocked her path.

He grabbed her roughly by her bony shoulders, spun her around, and tossed her, hard, into a living room chair.

“You son of a bitch!” Richard Bradley said and charged at the man while he was turned away from him. He made a fist and pounded it into the intruder’s back, just below the neck. The man spun around and swatted Richard away as if he was a child. As he stumbled back, the man glanced down, saw Richard’s bare foot, and drove the heel of his shoe down onto it.

Bradley shouted out in pain and collapsed toward the couch, catching the edge and falling onto the floor.

“Enough,” the woman said. She said to her partner, “Sweetheart, you want to turn down some of these lights? It’s awfully bright in here.”

“Sure,” he said, found the light switch, and flicked it down.

“My foot,” Richard whimpered. “You broke my goddamn foot.”

The woman perched her butt on the edge of the coffee table, where she could easily address Esther or look down to the floor to Richard.