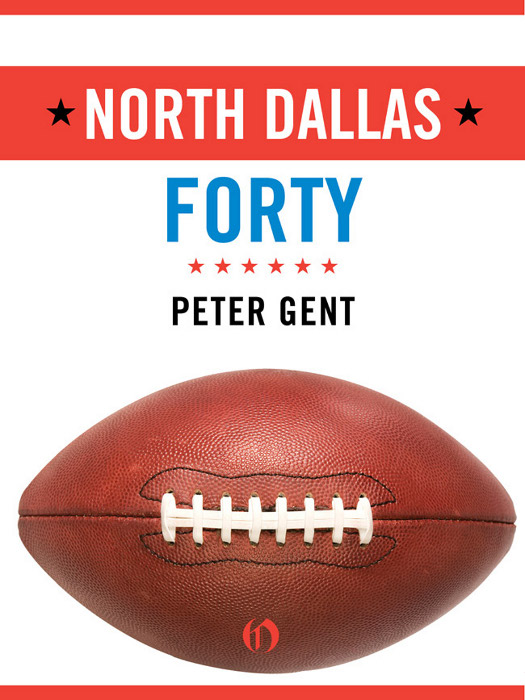 For Jodi and Holly

With thanks to Bud and Marvin

who died in vain in Beverly Hills

I
N HIS NOVEL
Heart of Darkness
, Joseph Conrad put it this way:

“Their talk was the talk of sordid buccaneers; it was reckless without hardihood, greedy without audacity, and cruel without courage; there was not an atom of foresight ... in the whole batch of them, and they did not seem aware these things are wanted for the work of the world.”

Thirty years after the first publication of
North Dallas Forty
, it hits me that those words describe best the life I once led.

In July of 1964, the right to work was all I hoped for when I arrived at my first Dallas Cowboys training camp in Thousand Oaks, California, north of Los Angeles. That September, Tom Landry gave me a job as a receiver that I kept for five years. They were great years. Terrifying. Thrilling. Happy. Sad. Most of all, they were ultimately satisfying.

As an ex-basketball player from Michigan State University, drafted by the NBA’s old Baltimore Bullets, I hadn’t played football since high school. I had some trouble adapting to the incredible violence of the game. My teammates helped me learn—both on and off the field. They were costly lessons; but I have never regretted playing football in the NFL.

I loved writing
North Dallas Forty
because it allowed me the rare pleasure of sinking myself in the ocean of memories from those years—a hard, violent, and painful life. I spent it with 40 of the most fascinating, intelligent, cunning, and dangerous men I ever had the pleasure to be around before or since. There were football players.

Anybody who makes it as a professional football player has survived the horror of real violence, facing the monster that lives in his heart—these men were true gods in ruins. Whether he stays a man is still a question of fate because the monster is always straining to be loosed again.

I still remember vividly the struggle to nourish desperate desires to be alive as a man can be—to live each day as it if were the last—feeling life pumping through us with the hammering of our hearts. It was a great life. A lot of scary high wire work, too many injuries, and lots of pain. But I felt more in one Sunday afternoon than I did later on in whole years—writing is the only thing I have done that comes close to being as terrifying as being a football player.

My teammates were brilliant, talented, and tormented men—the adrenaline highs of world class players at war in the game—each peculiar and fascinating, sometimes frightening men with the rare combination of great athletic skill, commitment, dedication, discipline, desire, plus the willingness to sacrifice his physical, mental, and emotional health. To risk his very life to this violent game for the chance to inhabit his animal brain freed from all bonds of social convention and expectation.

I’ve found myself sinking into the same ocean of memories a lot lately. Suddenly, I’ve been getting e-mails and visits from guys I played with and against in the NFL and played basketball with and against in the Big Ten. I think about these people going back into the past, realizing that I am now old enough that
North Dallas Forty
could be considered a period piece—but no less shocking or true for the passing of time. The current generation might well understand the novel better in hindsight than the people who lived it because they realize where most players have ended up—they’ve been reading the newspapers and listening to the news for the past 30 years.

Luckily, the league that never disappoints keeps coming through for us. We’re talking the N F’ing L, mister. There’s no greater display of everything that’s magnificent about sport in America and everything that’s wrong with culture in America. It’s on your TV almost half the Sundays of the year. When the cameras are off and you’re not watching, these fellas really start to entertain. Rae Carruth is serving a 19-year sentence for conspiracy to murder. There are so many others. Like the receiver arrested for driving recklessly, and allegedly under the influence of various substances. Here’s an important lesson for young receivers—driving recklessly is a really bad idea when you’re traveling with a loaf of cocaine. The good news for fantasy football geeks, and for coke dealers in any NFC West city, is that prosecutors will not pursue felony possession charges.

But it isn’t just the news about the current players. So many remarkable things have happened just in the past few years. Six NFL players from my era have died suddenly. (Only Johnny Unitas was older, and he dropped dead working out.) Two friends I played with in Dallas have begun to suffer noticeable signs of premature dementia—a.k.a. Punch Drunkeness—from too many hits in the head. And I can’t keep up with the list of players who have won and lost or are still battling cancers. Plus all the heart attacks, and liver or kidney failures. And that doesn’t include the artificial knees and hips—or the titanium metal plates inserted into a misdiagnosed broken neck (diagnosed without x-rays 35 years ago as a ‘stinger’).

For me the worst was Bobby Hayes’ death. It was hard to really deal with that. He had finally left Texas for the safety of his home state of Florida after Texas beat the shit outta him. Christ, when Bobby got there it had only been two years since JFK’s death—the COLORED ENTRANCE signs were still on all the downtown theatres leading up to the third balcony. There were still two drinking fountains. We trained in southern California because there was no place in Texas that would allow black players to live during camp.

It never really changed in the years I played there (until 1969). In 1968, Dan Reeves’ hometown of Selma blew up and the nightly news was either Vietnam or uppity niggers getting the shit beat out of them. Dallas gave all the rookies the Minnesota Multiphasic Personality test and a standard IQ test—all of it was weighted to make certain the blacks could deal with the pressure of living in the south. The SWC and SEC didn’t allow blacks to participate in sports. And by 1968, Martin Luther King and Bobby Kennedy were dead and Nixon declared the drug war. Paranoia was everywhere. The league sent investigators after me because I entertained black players and their families in my home. It was paranoid lunacy.

While we survived, The Game was a Great Love and a Great Passion. But so few are able to comfortably put it in their past. At some point, I think we all began to realize the game was corrupt and we all struggled to find meaning in a life spent playing the game as the corruption closed in on us and our loved ones.

We need to make a new generation realize that
North Dallas Forty
isn’t just a book about football—it remains a prediction of the direction of America by reading the livers, kidneys, and spines of old NFL players.

You can teach me life’s lesson

You can bring a lot to know

But you just can’t live in Texas

I
WAS FREEZING MY ASS
in the back of the pickup when O.W. Meadows finally turned off the blacktop and pulled to a stop alongside an oat field. We had been driving west about forty-five minutes from Fort Worth on the old Weatherford Highway. Meadows, Seth Maxwell, and Jo Bob Williams were crowded in the cab. I had been elected to ride in the back, owing more to my smaller size, milder demeanor, and lesser status than to my desire to do so. Occasionally Seth passed me the bottle of Wild Turkey bourbon and it helped cut the cold some, but mostly I just huddled behind the back of the cab against the damp wind.

As the truck bounced to a halt, Jo Bob stumbled out laughing and fell in the ditch. He was clutching the bottle of Wild Turkey. There was about an inch of the amber fluid left. He tossed it at me.

“Here, motherfucker,” he growled. “Finish off the bird-bigger and let’s unload them guns.”

I complied, grimacing as the heat burned my throat and boiled up into my sinuses.

It was a drizzling, cold autumn day. Everything was either gray or yellow brown. It was the kind of day I like to watch from the warmth and security of my bed. Instead, I was with three drunken madmen on a Texas dove hunt. I told myself it was for the good of the team.

“Goddam, lookit that.” O.W. Meadows had scrambled from behind the wheel. He was standing in the road pissing and pointing at several mourning doves coasting lazily into the oat patch. “Jeeeeesus. Gimme my gun.”

“They’re out of range,” I protested.

“Gimme my gun!” he screamed.

I handed him his square-backed Browning 12-gauge automatic with the gold trigger. He blazed away, the shot raining into the oats about halfway between the pickup and the doves.

“Jesus Christ,” I yelled. “That fucking gun was loaded!”

Several more doves flew out of the field and away from us.

The three men scrambled to the back of the truck for their shotguns and shells and then headed into the low brown oats. I grabbed my Sears 20-gauge and followed a few yards behind, trying to load and walk at the same time.

“The wet’ll keep ’em down,” Jo Bob said. “All we gotta do is put the phantom stalk on ’em and they’ll start comin’ in with their hands up.”

No Holding Back by Dresden, Amanda
Medstar I: Médicos de guerra by Steve Perry Michael Reaves
SCARS by Amy Leigh McCorkle
Tampa by Alissa Nutting
One Through the Heart by Kirk Russell
Head in the Clouds by Karen Witemeyer
Death of a Mystery Writer by Robert Barnard
Maintenance Night by Trent Evans
The Inspector-General of Misconception by Frank Moorhouse
Amber Brown Is Feeling Blue by Paula Danziger