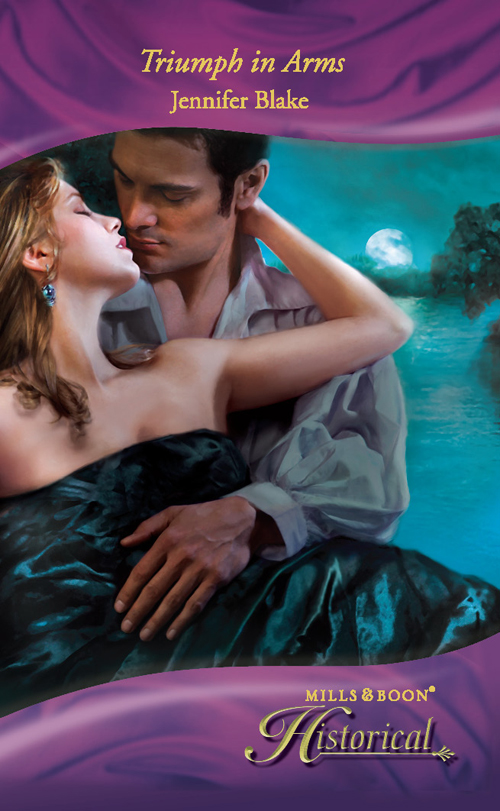 With a sharp eye for detail and dialogue, she serves up murder, secrets, retribution and the return of the members of the Brotherhood in an intensely passionate and emotion-filled romance.”

“Multi-award-winning author Jennifer Blake returns [with the] Masters at Arms series, set in nineteenth-century New Orleans, when honour was still decided with crossed swords and first blood. And a delightful return it is—I was engrossed from the first page to the last!”

“With a hero worthy of our dreams and a heroine women can relate to, this new masterpiece is a boon to Blake fans everywhere. Blake’s anticipated return to historical romance proves to be well worth the wait.”

-A Romance Review
on
Challenge to Honour

“Blake evokes the aura of New Orleans to perfection…this lush backdrop is perfect for a story as highly romantic and exciting as Blake’s.”

“
Dawn Encounter
is one of those books that once put down, you can’t wait to pick back up and read more. There is hot, sexual chemistry between Caid and Lisette that spices up almost every page…I can’t wait to read the sequel!”

“A brilliant addition to Jennifer Blake’s Maîtres d’Armes books…It is one of the most romantic books I’ve read. Fans of historical romance will not want to miss it.”

-A Romance Review
on
Rogue’s Salute

JENNIFER BLAKE
is a
New York Times
bestselling author who writes contemporary as well as historical novels. She draws upon her experience of the American Deep South where she was born and raised. Jennifer Blake and her husband live in Louisiana in a house styled after an old Southern planter’s cottage.

For my readers around the world who appreciate the romantic gesture, the passion and promise of love unrequited, the mystery of human relationships and the olden days when such things mattered

“Louisiana, a state of mind,” the ad copy reads, and so it is. The sweep of the state’s past extends from the seventeenth century under the Sun King Louis XIV through the panoply of colorful and outrageous characters to the events in today’s newspaper. Many authors have sought to capture the scope and spirit of this long stretch of history, extolling a piece here, a piece there, and I am indebted to every one of them. I am particularly grateful for Herbert Asbury’s
The French Quarter,
where I first saw mentioned the famous
maîtres d’armes
and their curious place in New Orleans society; for
Gumbo Ya-Ya: A collection of Louisiana Folk Tales
by Lyle Saxon, Robert Tallant and Edward Dreyer, with its excellent description of the life and customs of the aristocratic French Creoles of the Vieux Carré, as well as the flavor of their speech and their manifold superstitions; for
Gentlemen, Swords and Pistols,
Harnett T. Kane’s treatise on dueling in the antebellum south; and
Louisiana: A Narrative History
by Edwin Adams Davis, filled with succinct descriptions of events in various time periods. Eliza Ripley’s
Social Life in Old New Orleans
; Grace King’s
New Orleans: the Place and the People
; Stanley Arthur’s
Old New Orleans,
Albert E. Fossier’s
New Orleans: the Glamour Period, 1800–1840,
and particularly Benjamin Moore Norman’s famous guidebook written in 1845,
Norman’s New Orleans and Environs,
were all invaluable.

A number of great volumes on fencing remained close at hand during the writing of the Masters at Arms series. These include
The Duel
by Francois Billacois,
Harnessing Anger,
by Peter Westbrook,
The Art and Science of Fencing
by Nick Evangelista and, most useful of all because of its teaching techniques,
On Fencing
by Aldo Nadi. I am also most appreciative of the online sites about fencing and historic swords, not to mention the kindness of their owners and visitors in sharing their expertise on a subject I knew little about when I began writing about swordsmen six years ago. Nor can I neglect this opportunity to thank, once more, the staff of the Historic New Orleans Collection and Williams Research center, Chartres Street, New Orleans, for their patience in searching out books, papers and endless rolls of microfilm to feed my craving for historic detail. Librarian Robin Toms and her staff at the Jackson Parish Library, Jonesboro, Louisiana, deserve all praise, too, for keeping me supplied with reading material even in the face of my spotty record for returning it.

Finally, huge thanks are due to the most gentlemanly agent in the book business, Richard Curtis, for his sublime faith in this project; to my lovely editor, Susan Swinwood, for her unfailing support and sensitive editing.

C
hristien Lenoir waited with his thumbs in his waistcoat pockets and his back propped against a Doric column of the Théâtre d’Orléans’s arcaded entrance. Tension sang along his nerve endings. The lady should appear at any moment. A single glimpse was all he required; it would decide whether he proceeded or called a halt.

Around him the crème de la crème of the Vieux Carré streamed from the theater, pouring out into the damp night. Family groups, courting couples trailed by their duennas, widows and gentlemen on the town, they moved in a murmur of animated conversation and hummed snatches of the music just heard in
L’elisir d’amore.
The flickering gaslights mounted above the arched theater entrance cast a yellow-orange glow over the opera crowd, glinting on jewels, shimmering on silks, satins and velvets, turning white linen a sickly hue. In the street beyond the wide banquette,
it reflected with a glasslike sheen from the wet carriages as swearing drivers jockeyed for position, preparing to take up their owners. Rain had passed over during the performance, leaving puddles between the paving stones that rose in glittering wavelets as horses’ hooves and carriage wheels splashed through them.

Abruptly, Christien straightened. There she was, Madame Reine Marie Cassard Pingre, just emerging into the lamplight’s glow. Her young daughter walked beside her. They came closer, passing where Christien stood, so near he could hear the silken whisper of the lady’s petticoats, catch a delicate wafting of roses and lavender. Face set, looking neither left nor right, she seemed intent on reaching the near corner where the rue d’Orleans crossed rue Royale.

She was beautiful, he saw, as all things unattainable are beautiful. Following her with narrowed eyes, Christien felt a prickling at the back of his neck not unlike the warning when he faced an adversary of unknown skill, uncalculated power.

The mother and child he watched were strikingly similar. Bright hair, light brown touched with gold, curled in fine tendrils around their faces. Though the lady’s tresses crowned the top of her head in an intricate arrangement nestled with pink camellias, the child’s drifted around her in the night wind in fine intimation of how her mother’s might appear if released from its pins. Wide-spaced eyes, delicately molded noses and determined chins marked them both. Their slender forms, encased in the lavender-gray silk of demi-mourning, were made to appear fashionably fragile and elegant by
some modiste’s clever fingers. The affection between them was plain to see as the lady glanced down at the child, no more than four or five years old, whose small, glove-encased hand rested in hers.

Christien’s every sense took on a razor-sharp edge. The streetlamps seemed brighter, the night air fresher, the murmur of the crowd around him like a roar. His heartbeat increased in tempo while a piercing ache of need spread from its heated center.

It stunned him, that sudden hunger of the heart. As a
maître d’armes,
one of the infamous fencing masters of New Orleans, his days were devoted to masculine pursuits. Little time was left for feminine company and none at all for respectable females. He had schooled himself to do without such tender influences, seldom allowed them to cross his mind, never permitted them to hold his thoughts or his desires hostage. He was immune, or so he’d felt, to the
coup de foudre,
that thunderclap of infatuation that made fools of other men.

He had not taken an attraction to his quarry into account. Nor had he considered how long he had been alone. It could be a dangerous oversight.

Mere lust was not the difficulty, though he could not take his eyes from the lady, felt suddenly parched for the taste of her, the feel of her skin against his. Rather, it was a near-desperate urge to stand beside mother and daughter, to walk homeward with them, protect them and, yes, claim them as his own and be claimed by them.

Christien swallowed on the tightness that invaded
his throat. He understood to a nicety who the mother and daughter were, knew their status in the
haut ton
of French Creole society. That he was unacceptable in the close circle of their acquaintance was a given. Yet the exclusion struck him now as such things had not in some time, making him feel the less for it.

Madame Pingre had been widowed two seasons ago, so was just beginning to leave off her mourning. The whispers concerning the death of her husband fretted the edges of Christien’s mind, rumors of bloody and convenient murder. Seeing her so close, he felt a flicker of disquiet. She was the kind of woman a man might kill to possess, yet he required her to be innocent; it was the only way the business at hand could succeed. If she was not as expected, he might live to regret his involvement.

The pair lived in one of the town houses on rue Royale, a pied-à-terre kept for the
saison des visites,
the annual escape from country life into the city for the social season now winding down with the advance of spring. Not for them the interminable wait to have a carriage brought around, peering down the street for its arrival among the others that clattered up the mud-streaked thoroughfare. They would simply walk home along the wet banquette.

The lady was certainly headed in that direction. The slight smile that curved her lips had a strained edge to it, Christien thought, and her attention was centered on the child with little left over for those around her. She moved in an aura of isolation and seemed to prefer it that way.

A male escort should have been with them. No doubt the lady’s father, Monsieur Cassard, was around somewhere but delayed as he spoke to acquaintances. Madame Pingre and her daughter were left unprotected for the moment. Christien’s frown deepened as he saw it.

Just ahead of her, a dowager in moss-green cut-velvet and cascades of pearls turned and called a greeting. Reine Pingre flushed a little, but paused in her escape. Her expression was polite as she exchanged compliments and listened to a spate of complaint that seemed directed toward the acting ability of the tenor they had just heard. The child, young Marguerite Pingre, stood swinging her mother’s hand as she gazed around her in bored impatience.

She glanced Christien’s way, her attention snared perhaps by his intent appraisal. She blinked, then returned it in solemn interest. Christien smiled and inclined his head, a consciously gallant gesture.

Young Marguerite’s mouth turned down. She spun around, putting her back to him. Clutching her mother’s fingers with both hands, she put her forehead against the bunched wrist of her opera-length kid glove. For long seconds, she hid her face there. Then she risked another quick glance over her shoulder.

It seemed a great victory, one more flattering than any coquette’s show of interest. Christien felt his mouth curve again in wry appreciation.