Read Not Proper Enough (A Reforming the Scoundrels Romance) Online

Not Proper Enough (A Reforming the Scoundrels Romance) 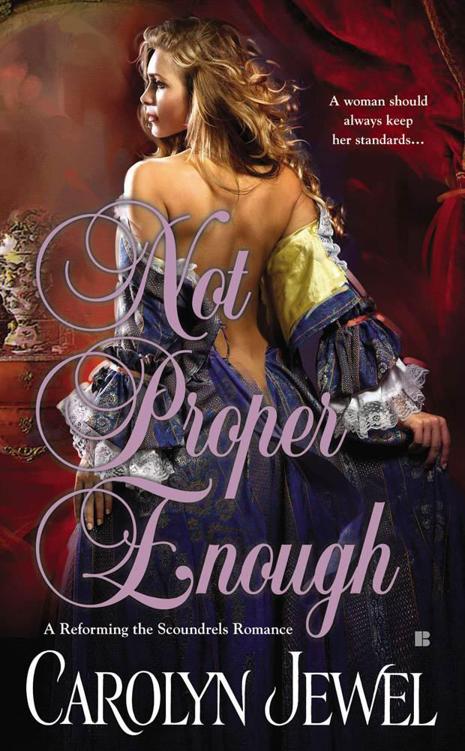 P
RAISE FOR THE NOVELS OF
C
AROLYN
J
EWEL

“I cannot wait to see more historicals from [Jewel] in the future.”

“Very entertaining…Hard to put down.”

“A fast-paced, attention-grabbing, action-packed hell of a ride.”

“Utterly radiant…and [the] characters are so bloody brilliant!”

“A wonderfully emotional story…packed with adventure and danger…This is one of the best books I’ve read all year.”

“A unique take on historical romance; it is an unusual and pleasurable tale.”

A Berkley Sensation Book / published by arrangement with the author

Berkley Books are published by The Berkley Publishing Group,

The “B” design is a trademark of Penguin Group (USA) Inc.

If you purchased this book without a cover, you should be aware that this book is stolen property. It was reported as “unsold and destroyed” to the publisher, and neither the author nor the publisher has received any payment for this “stripped book.”

To my son for being wonderful and amazing.

As ever, a big thank-you to my agent, Kristin Nelson, for all her help, advice, and assistance. Another thank-you goes out to my editor, Kate Seaver, and the entire team at Berkley. My thanks as well to Nyree Belleville, Jacquie Yau, Julie McDermott, and Robin Harders for everything done over dinners and European Sipping Chocolate. You guys keep me sane.

G
RENVILLE
F
OXMAN
T
ALBOT
, M
ARQUESS OF
F
ENRIS
and eldest and only son of the Duke of Camber, always slept the sleep of the innocent.

As a child, he’d never had nightmares, because even then he’d possessed the power to stop any terrifying developments that appeared in his dreams. If there were dragons about to roast him in flames, he slew them. He vanquished monsters with one stony glare, sprouted wings and flew off high cliffs, and conjured swords or other weapons when faced with threat of attack. He transformed enemies into slugs or simply stopped an unpleasant dream entirely.

He was dreaming now, and it was one of those dreams in which he was both participant and observer. As was so often the nature of dreams, the subject was both fantastical and sexual. He was naked, and in front of him, her back to him, was Robert Bryant’s widow. The part of him that was observing his depravity commented that this was absurd. Eugenia Hampton Bryant would never consent to be alone with him and certainly never in his private quarters. This observation was followed by the suggestion that it would be
a thunderingly good thing to discover where this dream would take him.

On no account would he wake up until he knew. He fell into his dream in a way that he had not before. Not in any dream. He was immersed. Submerged. Colors were more intense, his senses exquisitely acute. In the context of a dream that involved his most frequent sexual fantasies, this was an excellent development.

She wore blue and gray silk, sumptuous and cut like something from the previous century. The gown or robe or whatever it might be called was open at the back, all the way to the top of her derriere, and sliding off her shoulders. Because she wore no undergarments, which was not at all ludicrous to him, he feasted on the sight of her bare skin, the curve of her shoulders, back, and hips. Her hair was unpinned and swept over her right shoulder. Her head was turned to the left, as if she were about to look at him.

He walked to her, stopped behind her, and trailed a finger along the top of her deliciously bare shoulder and then the length of her spine. A sigh escaped from her lips. He slid his palm to her lower back, then underneath her gown and over the swell of her bottom. In his other hand, he gathered a handful of her bodice and watched while he pulled the fabric down to expose her breasts.

Beautiful. Luscious. Delectable. His body, already tense with desire, went taut. He released her gown so that it fell, with a rustle of lace and silk, to the floor. She leaned back, and he cupped one of her breasts in his hand. She sighed again and whispered something too low for him to hear.

What did it matter whose name she whispered so long as she was soft and willing in his arms? But it did matter. He wanted Eugenia to moan his name when he slid into her. He needed her to long for him, to cry out his name when he brought her to her crisis, which his irritating, observing self pointed out she never would do except in this dream. In which case, he had damn well better enjoy this, hadn’t he?

With her back pressed against his front, he caressed her, drew a fingertip along her hip to her rib cage, along the top
of her shoulder, down her upper arm, and then slowly from the top of her thigh across her stomach. Such smooth, soft skin. He kissed the side of her throat, and she melted against him.

In his dream, she did not hate him.

“So beautiful,” he whispered. “My beautiful Ginny.”

All the Bright Places by Jennifer Niven
Destined by Lanie Bross
War of the Undead (Day One): The Apocalypse Crusade (A Zombie Tale) by Meredith, Peter
7 Brides for 7 Bodies by Stephanie Bond
Safe Hearts (Amish Safe House, Book 3) by Ruth Hartzler
Battle of the Sun by Winterson, Jeanette
Zero K by Don DeLillo
Sin of Fury by Avery Duncan
Promises 2 by A.E. Via
Apparition by Gail Gallant