Read Nothing But Trouble Online 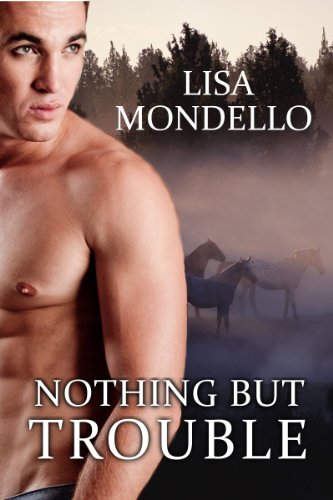 This eBook is licensed for your personal enjoyment only. This eBook may not be re-sold or given away to other people. Please purchase an additional copy for each person you share it with. If you're reading this book and did not purchase it, or it was not given to you as part of Kindle’s Lend program, then please delete it and purchase your own copy. Thank you for respecting the author's work.

Melanie Summers, a feisty zoologist with big dreams, has just made a deal with her father.  She has to spend a full month in the Wyoming wilderness and show her father she can handle being in a remote area while managing her Type 1 diabetes before he’ll agree to fund an expedition for her to go to Africa.  She knows he’s convinced she’ll fail.

But she’s not about to let any man underestimate what she can do.  Especially not the sexy rodeo cowboy she’s hired to help get her through the month in the wilderness.

Stoney Buxton needs to raise cash fast to save the family ranch after a barn fire injuried his father and left the family finances in ruin. Re-entering the rodeo circuit seems like the best way to get the money he needs.  That is until Melanie Summers shows up at his ranch flashing easy money. To everyone else, her offer seems like the answer to all his prayers. But one look at her long legs and pouting lips and Stoney know this high society gal is going to be nothing but trouble for his cowboy heart.

All I Want for Christmas is You ##

The Knight and Maggie’s Baby##

Her Heart for the Asking

His Heart for the Trusting

The More I See

This book is dedicated to Werner Naujoks with love.

“Like I just told you, ma'am,” Stoney Buxton said, glancing up through squinted eyes at the fair-skinned woman standing over him.  “I’m a rancher.  I don't do wilderness tours.  You'll just have to find someone else to guide you through that terrain.”

Though the sun floating in the cloudless sky in front of him made it difficult to see, he tipped the brim of his well-worn cowboy hat with the edge of the hammer he gripped between his fingers to get a better look at the young woman.

Now what in hell’s blazes is this?

She stood there, all legs, eyes, and lips pouting down at him.  A picture of beauty, polished and gleaming like Sunday silver.  Her long legs--he noticed every inch of them as his eyes trailed the length of her--would do better wrapped around a man's waist.  Even hidden beneath her smooth fitting jeans he could tell those legs were much too refined and delicate to take the hard living of trailing through Wyoming wilderness.  Her red manicured nails shone bright in the mid-day sun and matched the vibrant shade of her full lips.  Her eyes, a soft shade of cinnamon brown, held a determined fire that told him she wasn't going to back down, no matter what he threw at her.

Something was seriously wrong with this picture.

“Gerald Hammond from the General Store said that you were the best guide in the area.  I want the best.”

He saw her jaw set as a gentle breeze blew a wisp of hair over her forehead.  She quickly brushed it away with an air of grace that spoke of money.  Lots of it.  Family money that paid for the designer clothes caressing every curve and valley of her body.

Pulling himself up to a stand, he stretched out the ache in his leg and his shoulder.  That nagging ache was a constant reminder of the long days he now spent working the family ranch.  And why he'd quit rodeo over a year ago.

“Old man Hammond said that, did he?”

“Well, he was mistaken.  There are plenty of guides on the reservation that can take you safely through the Wind River Mountain Range.”

Her chest heaved with an impatient sigh.  “Yes, I know.  But I need something a little more than what they’re offering.  Much more, in fact.”

She didn't blink, even when he shifted closer.  He had to admire that she didn’t appear intimidated by him, seeing how he stood a good ten inches taller than her.  Lord, but she smelled good, all sunshine and fresh rain mixed with a hint of vanilla.  Bailing hay and stringing barbed wire didn’t afford him much opportunity to be in the company the likes of this pretty little eyeful standing before him.  It was just one more thing to remind him of what he was missing now that he was off the road and home for good.

“I don't think you understand, Miss...?”  He flipped his hand, palm up and waited for her reply.

“Ms. Summers.  Melanie Summers.  And I understand perfectly.  I understand that I am in need of a guide for the next four weeks.”  She sucked in a deep breath as he moved a step closer.

“What you're asking for is impossible at best.”  He shook his head at the absurdity of her request.  “Have you ever been in the wilderness?  Have you ever even saddled a horse?”

She lifted her chin defiantly, the spark in her soft brown eyes fired up like the heat of the sun beating down on them.  Her voice was sure.  “I know perfectly well how to ride, Mr. Buxton.”

“I'm not talking equestrian jumps that a poodle could land at the country club.  I'm talking wild terrain where you are no better than the animals that consider you their prey.  Have you ever had eight hundred pounds of snarling grizzly breathing down your neck?  Ever felt a hungry mountain lion's eyes on your back as she stalks you?”

She gasped softly, a small flash of uncertainty creeping into her sun filled eyes.

Stoney sputtered.  “Just as I thought.  Lady, roughing it isn't staying at the local motor lodge-”

Her eyes flew open in sudden surprise.  “Wait a minute.  The local motor lodge?  My father got to you.”  She said the words as a statement, he noticed, as if she was already convinced that it was fact.

“This just stinks!”  Balling her fists, she spun on her heels, muttering something unladylike under her breath as she took a few steps along the corral he'd been repairing in the feed yard.  Her soft red cotton shirt clung to her back, defining the lines of her slender figure as she took each labored breath.  He couldn’t help but wonder how it would feel to run his hand along her small back.

As she turned to face him again, he saw that her determined fire was back.  “No matter.  This isn't between you and my father; it's between you and me.  If you're holding out for more money, then fine.  Whatever it is that he promised you for turning me away, I'll top in return for getting me safely through the next month.”

“Look, lady, I haven’t a clue what you’re talking about.  But my refusal has nothing to do with money.”

She cocked her head in disbelief.  Her anger had vanished with the dust and was replaced with blue-blooded charm.  “Oh, it’s always about money, isn't it?”

His jaw tightened.  Yes, there was something definitely wrong here.  And money had nothing to do with it.  It had everything to do with this beauty standing in front of him, who was clueless about what she was getting her pretty little hide into.  “No,” he replied tersely.

“Tourist season is in full swing.  I’m sure you’ll have no trouble finding someone else.”

He turned his back to her and began walking along the fence toward the barn, almost forgetting...  Abruptly, he glanced up and saw the charred remains of the barn.  The place where all his troubles had started just one year ago.  It hadn't taken but a second for him to hear her boots digging into the dusty gravel behind him, jarring him from his thoughts.

“Then I'll do it myself,” she said to his back.

His whole body stiffened.  He angled back to read her face, to see if she was just being a spoiled rotten rich kid, trying to get her way, or if she was actually serious.  Seeing her head held high and her arms crossed in front of her, he realized she was dead serious.

And dead she'd be if she stepped one boot into those mountains alone.

Unexpected Gifts by Bronwyn Green
Expecting the Playboy's Baby by Sam Crescent
Shadow of the Mountain by Mackenzie, Anna
The Last Layover by Steven Bird
The Color of Silence by Liane Shaw
Maythorn's Wish (The Fey Quartet Book 1) by Emily Larkin
Son of a Gun by Justin St. Germain
It Started With A Kiss by Lindy Dale
A Song of Sixpence: The Story of Elizabeth of York and Perkin Warbeck by Arnopp, Judith
Unfed by McKay, Kirsty