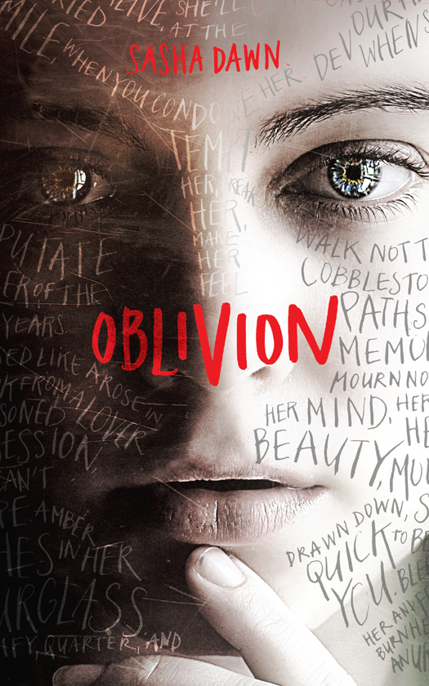 EGMONT
We bring stories to life

Dawn, Sasha.
Oblivion / Sasha Dawn.
1 online resource.
Summary: Sixteen-year-old Callie Knowles fights her compulsion to write constantly, even on herself, as she struggles to cope with foster care, her mother’s life in a mental institution, and her belief that she killed her father, a minister, who has been missing for a year.
Description based on print version record and CIP data provided by publisher; resource not viewed.
ISBN 978-1-60684-477-9 (EBook) – ISBN 978-1-60684-476-2 (hardcover) [1. Compulsive behavior–Fiction. 2. Mental illness–Fiction. 3. Recovered memory–Fiction. 4. Missing persons–Fiction. 5. Foster home care–Fiction. 6. Dating (Social customs)–Fiction. 7. Illinois–Fiction.] I. Title.
PZ7.D32178
[Fic]–dc23
2013021349

All rights reserved. No part of this publication may be reproduced, stored in a retrieval system, or transmitted, in any form or by any means, electronic, mechanical, photocopying, or otherwise, without the prior permission of the publisher and copyright owner.

For Joshua, and the two little ladies who brighten our lives

“It was not wisdom that enabled poets to write their poetry, but a kind of instinct or inspiration, such as you find in seers and prophets who deliver all their sublime messages without knowing in the least what they mean.”

L
indsey and I left her portable speakers in her backyard shed last week, during the thunderstorm. The Hutches haven’t yet bought us new speakers, so we’re listening to some grungy funk garage band on her cranked-up iPod. The tinny sounds eking through the nano echo, as if a Pink Floyd cover band is singing in a barren, institutional hall, attempting to entertain the crazies locked in a perimeter of padded dorms.

Instantly, with the image of an antiseptic asylum materializing in my brain, I think of my mother, who belongs in one. At least that’s what the county shrinks tell me. Funny. She seems so sane, so real, sometimes.

Lindsey’s smoking a joint, and I’m eating a cherry Tootsie
Pop. The combination of sugar and contact high is enough for me, as my mind is too cloudy to withstand the numbing effects of inhaled marijuana. It’s hard to focus on reality today, and not only because being in the shed sometimes feels uncomfortable—as if it’s a reminder of something I don’t want to remember. Sometimes, I think I’m losing my faculties. Like mother, like daughter.

This is how it begins. I fixate on a word until it consumes me. It comes out of nowhere, like a flicker of light on a distant horizon, then waxes and brightens until I see nothing, hear nothing if not the sound of the word, pushing out from the innards of my brain, begging for liberty.

Lindsey chokes on her smoke. “You gotta help me write something to Jon.”

John Fogel spells his name with an
h
, but Lindsey thinks it looks cooler without it. Less is more, she says, although she’s far from a minimalist. Like her parents, Lindsey Hutch doesn’t do anything halfway.

She calls everyone dude, especially when she’s smoking. It annoyed the hell out of me at first, but after a while, I started feeling a little lost if I ceased to be “dude” to her. In Lindsey-speak,
dude
is synonymous with
kosher, peachy keen, groovy
, which, to be fair, are antiquated terms in
their own right. But none of that matters to Lindsey. If she doesn’t call people dude, either she doesn’t know them, or she’s pissed off at them. Growing up the way I did, I don’t usually care whether someone’s angry with me or not, but Lindsey isn’t just someone—she’s all I have.

And I’ve seen her angry.
No one
wants to be on the receiving end of Lindsey Hutch’s scorn.

The Hutch family hosts me, or at least that’s the term they use. I prefer to call it like it is: they’re my foster parents, which makes them saints. Not many people would take in a girl like me—a sixteen-year-old bitch who can’t stop writing, can’t stop hooking up with the delinquent she met at County Juvenile Hall, can’t stop thinking her father is gone for one reason: because she killed him.

My name is Calliope Knowles. I’m a ward of the state of Illinois, and a clinically diagnosed graphomaniac. Unlike my pop-culture counterparts, who claim addiction to blogging on LiveJournals and watch over their Facebook pages, as if God might leave a comment there—imagine: God and seven others like Jenny Anderson’s status—I’m compulsive about writing. This means that I write for the same reason most of us breathe.

While my disorder is progressive, and therefore expected to become more pronounced as I grow older, there was nothing progressive about the onset of my affliction. I used to be a normal kid. I sneaked drags off cigarettes. Skipped every other page of
Hamlet
. Crammed two weeks’
worth of studying biology into the night before the test. And, sure, I’d written the occasional line of poetry, when dreaming about some boy I was likely forbidden to look at, let alone kiss; but one day, the day my father disappeared, I started writing, and I couldn’t stop. The words simply would not cease.

The police found me that day in the apartment above the Vagabond. I hadn’t lived there—no one had—in years. But I’d been hiding there, and that’s where my graphomania emerged, suddenly and viciously, from somewhere deep within my subconscious soul. By the time the police came for me, I’d written on my body, on the mirror, and door. The peeling pink wallpaper had become a canvas I’d filled with tiny, red felt-tip words:

The police had asked me: “Do you know where your father is?”

No one had seen him in a day and a half.

And: “Do you know where Hannah Rynes is?”

No one had seen her, either.

A day and a half.

Is that how long I’d been in that bathroom? How long I’d been awake? It’s a long time to be writing, that’s for
certain. There was mud on the door, in the foyer, in the drain, which suggests I’d gone somewhere. Maybe I was out hiding evidence. I wish I could remember.

The authorities don’t agree with me. They don’t think I killed my father, but they think I know something about his disappearance. If I do, I can’t remember. They think I’m in a perpetual state of shock, that eventually a lightbulb will illuminate the dark recesses of my brain to shed light on the disappearance. Without a body, my father’s case isn’t more than a missing person dossier collecting dust.

There’s one problem with that, however: twelve-year-old Hannah Rynes disappeared at the same time.

In a county that boasts less than one non-family-abduction per decade, the coincidence is too great to ignore. If the police find my father, maybe they’ll find Hannah.

“Nothing obvious, of course,” Lindsey’s saying. “Just something to get the ball rolling.”

“Nothing too cryptic or bookish, either.”

I pull the lollipop out of my mouth. “From what I can tell, he’s a deep guy. He needs cryptic and bookish.”

“Yeah, but he has to think I wrote it, genius.”

I breathe through the impulse, try to focus on Lindsey.

If history’s speaking, she’s going to be John’s girlfriend by Halloween. I’m an integral part of this scheme, and it isn’t the first time. I’ve hooked a couple of Lindsey’s prospective boyfriends with my words, and I have to admit I’ve seen this one coming. He’s the only guy she’s consistently talked about since I met her.

Amputate cancer of the folds of years
.

She’s the closest thing I have to a sister. I’ve lived here with her and her parents for almost six months now. I’d do anything for her. Including snaring an unsuspecting soul like John Fogel.

She’s right about that. I’ve caught his gaze a few times, and it’s hard to look away. His eyes … they’re a mesmerizing blue, rimmed with these thick black lashes. And his voice … a clear, confident tenor. Soothing. She’s chosen a good one to obsess over, that’s for sure.

Lindsey brings the joint, which by now is more roach than blunt, to her lips for a sharp inhale. The smoke encircles her head. Her aqua/green eyes blaze until they become gems amidst the haze. Her voice trails off, down a long corridor in my mind, overpowered by the words pounding against my brain, stretching out of their cocoons for liberty.

Lindsey’s calling to me, but I can’t focus on what she’s saying. The words nearly vibrate. What’s starting as a dull ache between my eyes will soon become a vise at my temples. Can’t delay any longer. I need a pen. There’s one in my backpack. I know there is. It’s always there. For emergencies.

I’m fiddling with the zipper, but already the pressure in my head pinches, stabs, distorts my vision. Lindsey helps me to force the zipper over the lump that is my calculus text.

Lodged under my textbooks. Can’t get it out. Snagged.

Tears well in my eyes, as I frantically divert my search to the red Bic—felt-tipped, of course—swimming at the bottom of my school bag. At last, I grasp it, fumbling over simple pronunciation of even simpler words—“think, thunk, tanku”—and press the tip to my jeans: