Read Of Alliance and Rebellion Online

Of Alliance and Rebellion 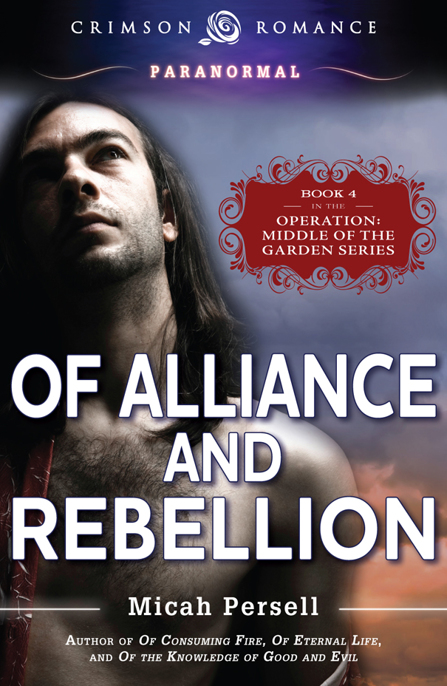 Of Alliance and Rebellion
Micah Persell

This book, or parts thereof, may not be reproduced in any form without permission from the publisher; exceptions are made for brief excerpts used in published reviews.

It is a widely acknowledged fact in our house that heroes with beards are not represented as they should be in the romance genre. So—

Cameron, my love, this one’s for you (and your epic beard).

Compulsion
: A phenomenon specific to angels. Once an angel plans out his or her mission, free will is not a possibility. At a certain point, the Compulsion will take over. The angel will complete the mission regardless of whether he or she wants to.

Daughters and Sons of Men
: Humans.

Knowledge, The
: The ability, provided by the Tree of the Knowledge of Good and Evil, to determine whether someone’s intentions are
good
or
evil.

Sons of God
: Angels; not always “sons,” which is an archaic reference used to encompass all of a species. Angels can also be female.

Temptation
: Each heavenly being will at some point encounter his or her Temptation—the one thing that will tempt them to Fall. Temptations can take several forms, but the most common is a daughter (or son) of man.

Tree of Eternal Life
: The tree in the Garden of Eden that bears fruit that turns living beings immortal.

Tree of the Knowledge of Good and Evil
: The tree in the Garden of Eden that caused the Fall of mankind. The fruit of this tree counteracts some of the effects of the Tree of Eternal Life. The fruit gifts humans with the Knowledge.

Voice, The
: A mysterious, disembodied entity that speaks directly to the minds of those who have eaten of the Tree of Eternal Life.

The Lord God made all kinds of trees grow out of the ground—trees that were pleasing to the eye and good for food. In the middle of the garden were the tree of life and the tree of the knowledge of good and evil.

After he drove the man out, he placed on the east side of the Garden of Eden cherubim and a flaming sword flashing back and forth to guard the way to the tree of life.

Now it came about, when men began to multiply on the face of the land, and daughters were born to them, that the sons of God saw that the daughters of men were beautiful; and they took wives for themselves…

Somewhere in the deserts of Afghanistan

A moan rent the air, penetrating Max Wright’s fitful sleep. The sound rooted its way into his brain, and he buried his head in the crook of his arm. When another moan followed the first, he made his way to wakefulness, prying open gritty eyes.

He blinked once, trying to make sense of the crumbling stone wall inches from his face. Max felt his forehead pucker as he came even more awake. He blinked several more times, but the view never changed, only grew clearer.

Moisture veined the ancient stones with white markings, and the cold night air of the desert penetrated the last of his grogginess. As always happened when Max remembered where he was and why he was here, his hand hovered over his face, fingers trembling, before he brushed them over the raised, ugly flesh that marred him. With the lightest of touches, his pointer finger traced the scar that began at his right temple. A weight settled in his gut as his fingers traveled the path of scar tissue down his ruined eyelid and across his nose to where it ended at the left corner of his jaw.

He licked dry lips.
It was not a dream.

Another moan, almost a wail, wandered over to where Max lay. With a sigh, he planted one hand on the ratty cot mattress and shoved himself up.

Knowing what he would find when he turned around, he plowed fingers through his matted hair, raking the strands over his right eye. He fought the urge to shake the unruly mop even further over his face. Acting as though it bothered him as much as it did was a show of weakness he could not indulge around the other two prisoners.

Max sucked in a breath and held it until the sting gave him enough courage to face the rest of the cell. Through the dank light filtering in from the cell’s only window, Max could see the dark form of Luke huddled over Oliver. Even through the barrier of his hair, Max’s ruined right eye zeroed in on the two men with a mental snap that never failed to steal Max’s focus. His sliced eye, which was good for practically nothing but this, spoke directly to his mind and informed him that both Luke and Oliver were
good
. It always informed him of this whenever he looked at them, just as it always informed them that their prison wardens—the few that were left—were
evil
.

Useless bits of information.
Max gritted his teeth. He already knew his fellow soldiers were good men, and he certainly knew the fuckers who had kept them locked in this cell for nearly nine years were just about as evil as anyone could get.

Max swung his bare feet around and planted them on the stone floor, flinching as his toes encountered frigid rock that had lost the earth’s heat soon after sunset. His sudden movement stole Luke’s attention, whose gaze collided with Max’s. Max again fought the urge to shake his hair over his face. He settled for turning his eye, the worst of his scarring, away, gazing at Luke with his good left eye. Even in the absence of light, Max could see the straining lines at the corners of Luke’s mouth.

“Is he still conscious?” Max’s sleep-ravaged voice seemed loud in the small cell, bouncing off of the rock that imprisoned them.

Luke’s equally dirty nest of red hair brushed his shoulders as he nodded once.

Max hadn’t missed the screams while he slept then. He clenched his fists when his hands wanted to tremble. It had been, what, four days since the last time Oliver had—done whatever it was he did every seven days? Max refused to think of it as dying, though that was probably the closest to the truth.

Luke sighed before turning his attention back to the twisting form of Oliver.

Max shoved to his feet and shuffled forward. “Come,” he said while gesturing to the cot he’d just vacated. “My turn to keep watch.”

Luke didn’t seem to hear him. He still hovered over Oliver, reaching toward the man once then clenching his hand before allowing it to fall to his knee.

Max glanced at Luke’s fingers as they flexed and felt a commiserating bitterness fill his mouth. Neither Max nor Luke could offer Oliver any real comfort. No pats on the shoulder. No holding his hand when the screams started. The lightest touch from either of them only increased Oliver’s torture.

“Luke,” Max said gently—or at least, as gently as Max could say anything. When Luke jumped like he’d been poked, Max guessed his attempt at
gentle
had far missed the mark. “You can’t help him right now. Get some sleep. I’ll watch him, I promise.”

Luke’s light brown eyes, so full of innocence that Max had to remind himself he and Luke were the same age, briefly closed before he got to his feet and walked over to the now-vacant cot, pausing in his stride to pat Max hard on the shoulder, a touch Max tolerated only because he knew it offered Luke comfort.

Max made his way on heavy legs to Oliver’s side, feeling Luke’s gaze on his back as he settled on the edge of Oliver’s cot, making sure that he didn’t brush him in the slightest. Luke’s stare made the skin stretching over Max’s scar burn, even though it was focused on his back, not his face. It wasn’t until Luke’s breathing evened out and deepened that Max took a breath.

With Luke asleep and relatively safe, Max’s responsibilities narrowed down to Oliver. Max focused on Oliver’s face—on the scrunched eyes, the thin, grimacing lips almost hidden from view by the unruly beard all three of them sported thanks to several years without access to a razor of any kind.

Those lips parted around a deep moan, and something clenched in Max’s chest. “I know, buddy,” he whispered to the man, feeling every inch of his uselessness in this situation. “I know.”

Oliver’s eyelids cracked open. The blue eyes that had charmed many a beautiful woman when they were in the army were now glassy and swimming with pain. “Hurts,” he groaned through parched lips. “So bad.”

Max cursed on an exhalation of air. “I know,” he said again, rage and hopelessness coursing through him.

“The One.” Oliver grunted as he tried to shift into a more comfortable position. “I need her.”

He was asking for her again. Max’s hands clenched on his thighs. That damned woman! Oliver had seen her once.
Once
. Nearly two years ago. He had been ruined ever since.

Quick calculations filtered through Max’s head, and he knew Oliver’s screaming would start in a few hours. It always did once he began begging for the woman who had left him in such torture with only one look. Tomorrow, Oliver would slip into sleep. Or a coma. Max didn’t know what to call it, but whatever it was, Oliver wouldn’t wake up from it until he—

Max swallowed thickly. He didn’t have to think about that now. He leaned over Oliver, as close as he could without touching, and did the only thing he could do: he talked to the man. Keeping his voice low enough that Luke couldn’t hear what he was saying, Max outlined exactly what he would do to their captors once they escaped. It was a list of horrors repeated so often that Max had no problem talking through it without thought.

As always, the lines around Oliver’s eyes eased as he took in Max’s voice. Whether it was the threats of violence against those who’d wronged them for nine years or the timbre of Max’s voice that slightly alleviated Oliver’s pain, Max never knew. But this was the only thing that seemed to help, and so Max would recite his plan for revenge until he went hoarse if necessary.

The list was long and took Max several hours to get through. He paused only once: when one of the handful of guards who remained in the prison tossed a dried lump of bread and discolored bladder of water through the bars. As soon as the guard shuffled away, Max continued. Rage twisted his words as Oliver’s hands clenched the mattress beneath him, his back bowing, his head snapping back. The first scream of what would be many was wrenched from the man’s chest, echoing around the cell loudly.

Luke sat up with a snort, jerked from sleep. He raced over to Oliver’s cot as Max rose to unsteady feet. “Oliver,” Luke said on a breath. “You’re okay.” Luke sat down where Max had been moments before. “You’re okay, man, you’re okay.”

Max ran his tongue along his teeth and took a step back before he could strangle Luke. Oliver was most definitely
not
okay, and all three of them knew it.