Read Out on a Limb Online

Out on a Limb 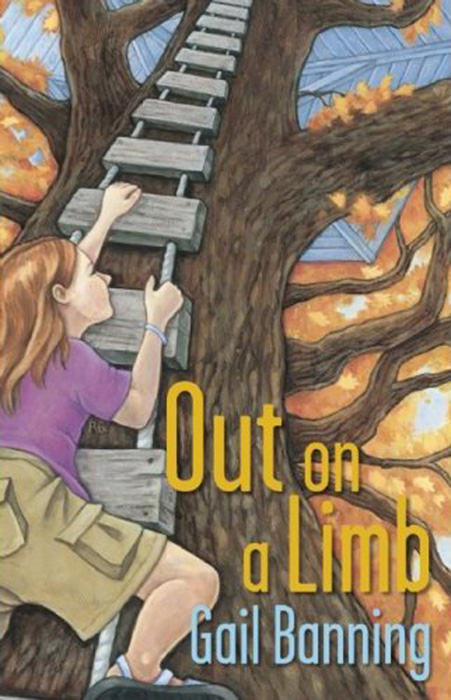 OUT ON A LIMB

All rights reserved. No part of this work covered by the copyrights hereon may be reproduced or used in any form or by any means—graphic, electronic or mechanical, including photocopying, recording, taping or information storage and retrieval systems—without the prior written permission of the publisher, or, in case of photocopying or other reprographic copying, a licence from Access Copyright, the Canadian Copyright Licensing Agency, OneYonge Street, Suite 1900,Toronto, Ontario, M6B 3A9.

“Dedicated with love to my daughters: my inspiration, my first readers, and my ideal audience.”

They’re here again
. The total strangers who are my family. And this time they plan to stay. I look down on them from my turret. They are beyond my meadow, on the far side of my stream, at the edge of my woods. Distance makes them tiny. I wave my sterling-silver bell, but Mr. Bickert doesn’t hear it, or he pretends not to. My sterling-silver bell belongs to another century. I remember this and reach for my cell phone instead. I speed-dial number one. “Mr. Bickert,” I say, “my binoculars please. And quickly.” He is quick, for once. He thumps up the turret stairs with them before the strange family has reached my stream.

“Your binoculars, Madam,” he says, placing them in my waiting hand. The binoculars, like so many of my things, are embossed with my full name, Lydia Florence Augustine McGrady. Except for Mr. Bickert, there is no one at all in the Manor to read my embossing and my engraving. All that it does is remind me of who I am.

I raise my binoculars and get the little family in my scope. Refocusing, I close the distance between us. I can see the four of them better now. The man with that little scruff of a goatee that seems to be all the fashion these days, for heaven only knows what reason. He must be David, the grandson of my dead brother. And that woman in a man’s undershirt with the tattoo around her bicep like a common sailor—that must be his wife, Andrea. But it’s at the two girls that I keep directing my aim. The bigger one, with hair shining like sheet copper, her name is Rosamund. The little one is called Matilda. They’ve been given good old-fashioned names at least, not India or Hunter or Ocean, or whatever other nonsense one sees in the birth announcements these days.

They look defenceless, this strange estranged family with all that they own in four wheelbarrows.

They’ve taken it upon themselves to bridge my stream with a boardwalk of planks. Rosamund’s wheelbarrow tips off the plank bridge and she wades down the stream in slow motion after her floating clothes. Afterwards, her family all sits on my meadow. They often look over here at Grand Oak Manor, but they don’t see me. I am hidden behind my stained-glass window. I watch them from a transparent pane. They never can tell when they are being watched.

After awhile they spring to their feet, laughing. They run, wheelbarrows bumping, toward the giant oak. They are young, and my binoculars don’t close the distance of years between us. I put my binoculars down and my estranged family becomes tiny again.

I wonder what they will do when they find what is waiting for them.

SUBJECT: The Infamous Will

We were nearly homeless
when we made our big discovery.

We still had a home then, but we were about to lose it. Developers were going to tear down our apartment building because it was old and shabby. Inside you could peel off paint in big flakes, and outside you could pry bits of coloured glass from the stucco. After it was ripped down they were going to replace it with luxury townhomes called Sandringham Mews, of all weird names. The developer had put up a big sign showing the fountain and miniature canals that would be in front of the luxury townhomes. The canals and fountain looked like a fun change from peeling paint and picking stucco, but we weren’t going to be living in Sandringham Mews. Too expensive.

We had to find another place to live, and it had to be somewhere cheap. “Something will turn up,” Mom said. She sounded all positive and cheery, but that never means much. She sounds that way pretty well all the time. Personally, I was not optimistic.

We had been apartment hunting for three Saturdays already, and things did not look good.

The first place we’d gone to see was a basement suite that smelled like a combo of boiled cabbage, cat pee and the bottom layer of a laundry hamper. When my sister Tilley and I held our noses, Dad nudged me with his elbow. “That’s rude,” he whispered, so the only way we could protect ourselves was to try to turn our nostrils inside out. The living room of this place had tiny windows way over my head, so high up that you couldn’t see anything out of them except the underside of dandelions. Still, they were better than the bedroom window, which was totally covered on the outside by a pile of dirt. That bedroom was like a furnished grave.

“Yuck!” Tilley and I declared, as soon as we left the basement suite and were back on the street.

“Yuck is right,” Mom and Dad agreed, much to our relief.

The next place was an apartment right at the intersection of two big highways. The apartment
looked
okay, but every time a truck went by the dishes and knick-knacks would hop up and down on the shelves and we all had to stop talking until the traffic roar faded. Also, the air in that place was at least 40 percent motor-vehicle exhaust.

Then there was the place where the glass lobby door had been all smashed and stuck back together with silver duct tape. We buzzed the intercom for the landlord, and he came lurching through the lobby like it was a ship deck in a storm. “Drunk,” I informed Tilley. His arm was all bandaged up with the same silver duct tape that was on the door. We didn’t even go inside.

On our third house-hunting Saturday I thought we’d found the perfect apartment. The newspaper ad listed an affordable price, and when we got to the building we saw white lace curtains in every window, new blue paint outside and a front garden full of very organized tulips. We were all jiggling each other’s arms in happiness when the landlady appeared. “Oh,” she said, looking down at Tilley and me as though we were a pair of overflowing garbage cans. “This is a child-free building. I’m
sorry
,” she said, which she obviously was not in the slightest. Even Mom looked a bit discouraged as we climbed back into our car. They were going to tear down our apartment on June 30. That was only two weeks away, and we still had no place to go.

We made our discovery that night. Dad had dragged all the cardboard boxes up from our basement storage locker. While Tilley and I tossed popcorn into each other’s mouths, Mom and Dad sorted through old income tax returns and appliance warranties, figuring out what to throw away before the move. Some documents went back into file folders. Most went into the recycling. And then Mom found it.

“David, what’s this?” she asked my dad. The paper she held had turned golden brown, like a treasure map, and it had big, antique-looking letters. “
Last Will and Testament of Magnus Everard Granville McGrady
,” Mom read.

“Your great-great-grandfather,” Dad said. “This must be his infamous will. I’ve never seen it before. I didn’t even know we had a copy.”

“Famous for being bad,” I told her.

Dad read over Mom’s shoulder. “
To Tavish Elliot Granville McGrady, who was once my son, I bequeath the estate treehouse. To my daughter Lydia Florence Augustine McGrady, I bequeath my beloved Grand Oak Manor, and the balance of my estate
.”

“What does that mean,” Tilley wanted to know.

“Well, your Great-great-grandfather Magnus, was mad at his son, your Great-grampa Tavish,” Dad said. “So Magnus wrote this will saying that when he died, Great-grampa wouldn’t get his money or his mansion or anything. Instead of dividing things up between his two kids, Magnus gave it all to his daughter, and he didn’t give Great-grampa anything.”

“That’s not fair,” Tilley said. That’s something she says a lot, but this time I agreed.

“But does that will give Great-grampa a treehouse?” I asked.

“So what’s the story with this treehouse?” Mom asked.

“Don’t really know,” Dad said. “There was a treehouse on the estate when your Great-grampa was a boy, but I never saw it. Obviously. The split in our family happened a long time before I was even born. Great-grampa used to talk about the treehouse though. It was way up in some humongous tree. A giant northern oak, maybe? Something really rare anyway. He even slept up there sometimes.”

“I doubt if it’s still there, all these years later,” Dad said, “and even if it is, it would be on private property. Your Great-grampa’s sister, Lydia, still lives on the estate. And she’s a total stranger to us, even though she is your great-great-aunt.”

My Great-grampa died when I was four years old, when a mudslide swept his van off the highway and into the river.

“Dad,” I asked, “who did Great-grampa leave
his
money and property and stuff to, when he died?”

“To Grampa, what there was of it.” Grampa had been driving the van and he also died in the same accident, along with my Grandma and aunt. Fortunately, I was too little at the time to fully experience tragedy.

“Well, who did Grampa leave
his
property to?”

“Technically, I guess,” Dad said. “But Rosie, the treehouse part of the will is just a mean joke, you know.”

“Please, please can we go see the treehouse,” Tilley begged.

“Shouldn’t we at least check though?” I asked. “We could go there for a family walk. You and Mom love family walks. We could at least try to see it, couldn’t we?”

To check out the treehouse
, we drove way across town to a fancy neighbourhood. I’d never been there, but Mom and Dad knew the area because it’s near the university where they were doctoral students. The university only gives doctorate degrees to people who have studied forever and ever and written an endless nightmare essay called a thesis. Dad was taking entomology, which is the study of bugs. His thesis was about how to get good insects to eat harmful ones so that mankind won’t have to use toxic chemical pesticides anymore. Mom was taking linguistics, and for her thesis she was trying to invent a language that could be spoken and understood by both humans and apes. “I think we’ll park here,” Dad said, pulling up to the curb. On one side of the street were great big houses. On the other side there was nothing but woods.

“Are we at Great-great-aunt Lydia’s?” Tilley asked.

“No,” Dad said. “We’re at the edge of the University Endowment Lands, but if we walk a mile or two through the woods, we’ll get to the back of her estate. We’ll sneak in that way, so she doesn’t come charging at us with a
No Trespassing
sign.”