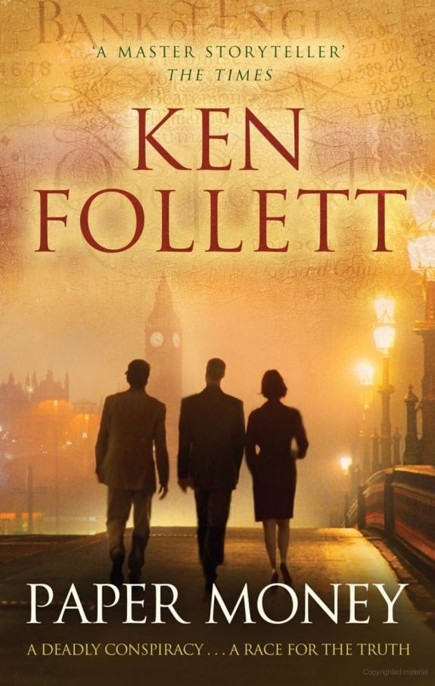 THIS BOOK WAS WRITTEN in 1976, immediately before Eye of the Needle,

and I think it is the best of my unsuccessful books. It was published

under the pseudonym Zachary Stone, as was The Modigliani Scandal,

because the books are similar: they lack a central character, but

feature several groups of characters whose stories are linked and share

In Paper Money the links are less fortuitous, for the book is supposed

to show how crime, high finance, and journalism are corruptly

interconnected. The ending is rather somber by comparison with The

Modigliani Scandal--in fact it is almost a tragedy. However, it is the

differences and similarities between Paper Money and Eye of the Needle

that are most instructive. (Readers who want the cake, not the recipe,

should skip this and go straight to Chapter One.) The plot of Paper

Money is the cleverest I have ever devised, and the small sales of the

be written down in three paragraphs, as indeed I did write it when I

first thought of it. Eye of the Needle has only three or four main

characters whereas Paper Money has a dozen or so. Yet with its complex

plot and large cast, Paper Money is only half the length of Eye of the

Needle. As a writer I have always had to struggle against a tendency

to underwrite, and in Paper Money you see me struggling in vain.

Consequently the many characters are painted in brisk, bold brush

strokes and the book lacks the feeling of detailed personal involvement

One of the strengths of the book is its form. The action takes place

(or missing). Eye of the Needle has an even more rigid structure,

although nobody to my knowledge has ever noticed it: there are six

parts, each with six chapters (except for the last part, which has

seven), the first chapter in each part dealing with the spy, the second

with the spy catchers, and so on until the sixth, which always tells of

the international military consequences of what has gone before.

Readers do not notice such things--and why should they?--but still I

suspect that regularity, and even symmetry, contribute to what they

perceive as a well-told story. The only feature Paper Money shares

with Eye of the Needle is a wealth of good minor characters tarts,

In subsequent books I have not done this, for it only diverts from the

main characters and their story; yet I often wonder whether I am being

between crime, high finance, and journalism; but I think this book is

true to life in another way. It presents a detailed picture of the

London that I knew in the seventies, with its policemen and crooks,

bankers and call girls, reporters and politicians, its shops and slums,

its roads and its river. I loved it, and I hope you will too.

IT WAS the luckiest night of Tim Fitzpeterson's life.

He thought this the moment he opened his eyes and saw the girl, in bed

beside him, still sleeping. He did not move, for fear of waking her;

but he looked at her, almost furtively, in the cold light of the London

dawn. She slept flat on her back, with the absolute relaxation of

small children. Tim was reminded of his own Adrienne when she was

little. He put the unwelcome thought out of his mind.

The girl beside him had red hair, fitting her small head like a cap,

showing her tiny ears. All her features were small: nose, chin,

cheekbones, dainty teeth. Once, in the night, he had covered her face

with his broad, clumsy hands, pressing his fingers gently into the

hollows of her eyes and her cheeks, opening her soft lips with his

thumbs, as if his skin could feel her beauty like the heat from a fire.

Her left arm lay limply outside the coverlet, which was pushed down to

reveal narrow, delicate shoulders and one shallow breast, its nipple

They lay apart, not quite touching, although he could feel the warmth of

her thigh close to his. He looked away from her, up at the ceiling, and

him like a physical thrill; then he got up.

He stood beside the bed and looked back at her.

She was undisturbed. The candid morning light made her no less lovely,

makeup. Daybreak was less kind to Tim Fitzpeterson, he knew. That was

why he tried not to wake her: he wanted to look in a mirror before she

He went naked, padding across the dull green living-room carpet to the

bathroom. In the space of a few moments he saw the place as if for the

first time, and found it hopelessly unexciting. The carpet was matched

by an even duller green sofa, with fading flowered cushions. There was a

plain wooden desk, of the kind to be found in a million offices; an

elderly black-and-white television set; a filing cabinet; and a

bookshelf of legal and economic textbooks plus several volumes of

He had once thought it so dashing to have a London pied-a'-terre.

The bathroom had a full-length mirror--bought not by Tim, but by his

wife, in the days before she had totally retired from town life. He

looked in it while he waited for the bath to fill, wondering what there

of--what, twenty-five?--into a frenzy of lust. He was healthy, but not

fit; not in the sense with which that word is used to describe men who

do exercises and visit gymnasia. He was short, and his naturally broad

frame was thickened by a little superfluous fat, particularly on the

chest, waist, and buttocks. His physique was okay, for a man of

forty-one, but it was nothing to excite even the most physical of women.

The mirror became obscured by steam, and Tim got into the bath. He

rested his head and closed his eyes. It occurred to him that he had had

less than two hours of sleep, yet he felt quite fresh. His upbringing

would have him believe that pain and discomfort, if not actual illness,

were the consequences of late nights, dancing, adultery, and strong

drink. All those sins together ought to bring down the wrath of God. No:

the wages of sin were sheer delight. He began to soap himself languidly.

It had started at one of those appalling dinners: grapefruit cocktail,

useless organization. Tim's speech had been just another exposition of

the Government's current strategy, emotionally weighted to appeal to the

particular sympathies of the audience. Afterwards he had agreed to go

economist--and two faintly interesting people from the audience. The

Tim's means; but someone else had paid the entrance. Once inside, he

began to enjoy himself, so much so that he bought a bottle of champagne

with his credit card. More people had joined their group: a film company

executive Tim had vaguely heard of; a playwright he hadn't; a left-wing

economist who shook hands with a wry smile and avoided shop talk; and

the girls. The champagne and the floor show inflamed him slightly. In

the old days, he would at this point have taken Julia home and made love

to her roughly--she liked that, just occasionally. But now she no longer

came to town, and he no longer went to nightclubs; not normally.

The girls had not been introduced. Tim started to talk to the nearest, a

flat-chested redhead in a long dress of some pale color. She looked like

a model, and said she was an actress. He expected that he would find her

boring, and that she would reciprocate. That was when he got the first

intimation that tonight would be special: she seemed to find him

fascinating. Their close conversation gradually isolated them from the

rest of the party, until someone suggested another club. Tim immediately

said he would go home. The redhead caught his arm and asked him not to;

and Tim, who was being gallant to a beautiful woman for the first time

in twenty years, instantly agreed to go along. He wondered, as he got

out of the bath, what they had talked about for so long. The work of a

Junior Minister in the Department of Energy was hardly cocktail-party

conversation: when it was not technical, it was highly confidential.

Perhaps they had discussed politics. Had he told wry anecdotes about

senior politicians, in the deadpan tone which was his only way of being

He could not remember. All he could recall was the way she had sat, with

every part of her body angled devotedly toward him: head, shoulders,

knees, feet; a physical attitude that was at once intimate and teasing.

He wiped steam off the shaving mirror and rubbed his chin speculatively,

sizing up the task.

He had very dark hair, and his beard, if he were to grow it, would be

thick. The rest of his face was, to say the least, ordinary. The chin

was receding, the nose sharply pointed with twin white marks either side

of the bridge where spectacles had rested for thirty-five years, the

mouth not small but a little grim, the ears too large, the forehead

intellectually high. No character could be read there. It was a face

trained to conceal thoughts, instead of displaying emotion.

into view. He was not even ugly. Some girls had a thing about ugly men,

women. Tim Fitzpeterson did not even fit into that dubiously fortunate

into. The second club they had visited had been the kind of place he

would never knowingly have entered. He was no music-lover, and if he had

liked it his taste would not have included the blaring, insistent row

which drowned conversation in The Black Hole. Nevertheless, he had

danced to the jerky, exhibitionist dancing that seemed to be de rigueur

there. He enjoyed it, and thought he acquitted himself well enough;

there were no amused glances from the other patrons, as he feared there

might be. Perhaps that was because many of them were his age.

The disc jockey, a bearded young man in a T-shirt improbably printed

American with a heavy cold. They were on the small dance floor at the

The girl came close to him and wound her arms around him. Then he knew

she meant it; and he had to decide whether he was equally serious.

With her hot, lithe body clinging to him as closely as a wet towel, he

made up his mind very quickly.

her ear: "Come and have a drink at my flat."

years! The kiss was so luscious, like a kiss in a dream, that he touched

her breasts, wonderfully small and hard under the loose gown; and after

that they found it difficult to restrain themselves until they reached

The token drink was forgotten. We must have got into bed in less than a

minute, Tim thought smugly. He finished shaving and looked around for

cologne. There was an old bottle in the wall cabinet.

He went back to the bedroom. She was still asleep. He found his dressing

gown and cigarettes and sat in the upright chair by the window.

I was pretty terrific in bed, he thought. He knew he was kidding

himself: she had been the activist, the creative one. On her initiative

years in the same bed.

Yes, Julia. He gazed unseeing from the first-floor window, across the

narrow street to the red-brick Victorian school, its meager playground

painted with the fading yellow lines of a net ball court. He still felt