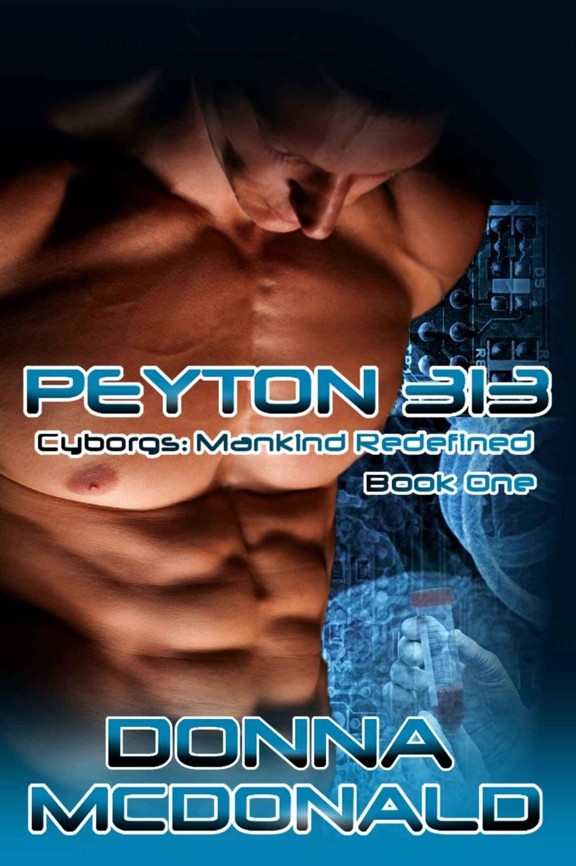 Worst epic fail of her scientific career? Falling for a cyborg she helped create.

Kyra Winters never meant for her cyber science discoveries to be used for evil, but that’s exactly what happened. Now returning Peyton 313’s humanity is the last chance she’ll ever have to atone. She can’t get back the lost decade, but she can change the present by restoring the cyborg who was once Marine Captain Peyton Elliot.

Certainly her grand plan for rectifying her mistakes didn’t include madly kissing the confused, passionate Marine when he begged her to. The same scientific mind that constructed the cyborg creator code now warned her not to let Peyton’s tempting offers of heaven cloud her rational decision making. Yet it’s difficult to resist the cyborg she’s restoring when he’s also the most intriguing man she’s ever known.

Now partially restored, Peyton thinks he’s a soldier still at war. But no matter how tempting it is to let him keep believing that illusion, Kyra knows she can’t keep the last decade a secret from him forever. The truth won’t set either of them free, but Peyton deserves to know about his life, even if he ultimately hates her for what she’s done.

Other Books by Donna McDonald

Excerpt from The Tracker’s Quest

Edited by
The Proof Is In The Reading

This ebook is licensed for your personal enjoyment only. This ebook may not be resold or given away to other people. If you would like to share this book with another person, please purchase an additional copy for each person you share it with. If you're reading this book and did not purchase it, or it was not purchased for your use only, then you should delete it from your device and purchase your own copy. Thank you for respecting the author's work.

This book is a work of fiction. Names, characters, places, and incidents either are the product of the author’s imagination or are used fictitiously. Any resemblance to actual persons, living or dead, businesses, companies, events, or locales is coincidental.

This book contains content that may not be suitable for young readers 17 and under.

Thanks to my husband, Bruce, for his lack of complaining when I used a great part of our meager vacation this year to write the first half of this book. You truly are the best example of every hero I write.

Thanks to authors J.M. Madden and Robyn Peterman for their constant support of my work no matter what kind of crazy “out there” ideas I get. Friends like you are priceless and I value you more than I can ever adequately express.

This book is for author friend, Eve Langlais, whose cyborg books have filled many reading hours and fulfilled Sci-Fi fantasies for me. I always look forward to the next one.

Many thanks for the inspiration and encouragement to write my own.

“Dr. Winters, how can you refuse this kind of money? Chancellor Li and I approved Norton’s offer of twenty million solely because you are the last original cyborg creator. More is simply not a possibility. Now if it’s the lead scientist position you crave, perhaps that can be discussed as an additional incentive for your return.”

Kyra tried her best not to react too negatively to the giants glaring at her through her monstrous living room com. Jackson had abandoned the seldom used device during their divorce many years ago. She was only using it for the conference call so the UCN chancellors would see her relaxing on her sofa instead of staring intensely at her lab console.

She could handle the pressure they were exerting on her to return to Norton because she had no intention of going back. But it was not fun to face down several frowning impatient men whose every frustrated expression was being projected directly into her wide-eyed retinas. Luckily her far beyond Mensa level brain discarded her rising nervousness as it reminded her there was no reason to be intimidated by an optical illusion. She had met all the chancellors many times. Most of them were much shorter than her five foot ten inch height.

“Gentlemen, I am deeply honored you have taken the time to contact me this morning. But however inconceivable it might be for Norton or the UCN, my retirement has nothing to do with money. My plan is to find a more satisfying use of my skills. As you know my specialty has always been military cybernetics, but the final war has been over for almost a decade. There is no research being done at Norton right now that suits my desire to better the world we live in. I’ve made no secret of the fact that I am morally opposed to installing the behavior modification system in children.”

Kyra watched as Chancellor Owens fought not to roll his eyes at her adamant statement. He was a thoroughly detestable man, and she didn’t understand how someone like him had managed to become the UCN’s head chancellor.

“Yes. We are all aware. Fortunately, there are other cyber scientists willing to lend their talents to that specific project. If Norton has nothing that interests you at the moment, perhaps a paid consultancy would suit you more than a permanent position. I’m sure the personal loss of not one, but two costly Cyber Husbands over the last seven years, has been traumatic for you. And we are all aware that Jackson left you no choice but to deal with his own death recently. What I’m trying to say is that we understand this may be a time in your life where it’s natural you would be doing a lot of. . .self-reflection.”

Kyra watched Chancellor Owens shrug his shoulders after his speech and look away. She had no logical reason to dislike him other than he always gave her the creeps. And she doubted he ever reflected on anything outside of his bank account for long.

“The consideration of the UCN council for my personal losses is greatly appreciated, but I assure you I am doing just fine. My relationship to Jackson was over long before his death occurred and brought me back into the picture temporarily. And as the submitted reports on my Cyber Husband’s unfortunate deaths indicated, both of them came to me with undiagnosed mental health problems. Their losses merely taught me to be a smarter consumer about spending my money.”

When Chancellor Owens glared at her explanation, Kyra had to fight off the urge to sigh. She was getting really tired of defending her right to do what she wanted for a living.

“That’s good to hear, Dr. Winters. Still—I don’t think it’s wise of you to make any sort of final decision about refusing so much potential income,” he suggested.

Kyra nodded reluctantly. Chancellor Owens had a rational point about her income and she had no way to defend her own logic without revealing her disgust with Norton and the UCN. All she could do was hope they left her alone long enough to finish her task.

“I concede your suggestion to delay my final choice is wise, but for now I remain resolved in my quest to find a happier life with more suitable work. Receiving Jackson’s surprising inheritance has allowed me to purchase a third Cyber Husband. In fact, he’s being delivered in a few hours. I’ve planned a short honeymoon for us next week, so it is doubtful I will look for work until after our return.”

Kyra swallowed past the knot of tension in her throat. She really wanted to say “not only no, but hell no” to going back to Norton, but she was too afraid of the UCN’s power to deny their request so flatly. “Perhaps from time to time I could return to Norton to work on special projects. I will give that idea some additional thought once I’ve settled down to marital life again.”

“Yes, please do that, Dr. Winters. And congratulations on your new purchase. You have the UCN’s best wishes for the relationship to be both pleasing and successful this time,” Chancellor Owens declared.

Kyra nodded once, hoping the man was finally winding down. “Thank you, Chancellor Owens.”

“Have a blessed day, Dr. Winters.”

“May the same fate be yours, Chancellor.”

Kyra laughed and shook her head after she had disconnected. The amount of money the UCN had been willing to pay her to return to Norton was unnaturally obscene. If she was worth twenty million a year to them to stay, would the UCN really let her go work for anyone else for less money? Probably not.

But what could they do to stop her?

Or maybe the right question was, what
would
they do to stop her?

Thinking of the conference call and her own trepidation made her suddenly regret all the things she had put off doing up to now.

She had to wipe the nervous sweat from her palms before the remote for the com would work under her fingers. When she was sure the com viewer was shut down completely, she rose and headed for her lab.

Kyra sighed with genuine regret as she attached the most recent photo she could find to the video file she was creating. She stared for a while at the handsome solider, then cleared her throat as her finger hesitated over the record symbol.

Making a holographic message to document her work had been put off for too long already. She had one more chance—one more cyborg—and he was due to be delivered in just a few hours. If restoration didn’t work this time, her video confession might be the only record of all the secrets she had kept for the last seven years. There was no money left for another attempt, which meant there was also no time left for being afraid.

“Record full body visuals as well as speech. Visual is to be permanently attached to the final output. Destroy any file copy on attempt at separation of visual, or any attempt to edit content at all. Set password code for running the file as. . .”

Kyra hesitated over the password. To open the message, she had intended to use the cyborg ID of her first successful restoration because the man himself would become the living dissertation proving her work. Since she hadn’t been successful yet, she could only have faith that her third and final attempt would net that result.

She cleared her throat one final time before starting the recording.

“Hello. My name is Dr. Kyra Winters. I am one of the two original cyber scientists who invented the Cybernetic Soldier program. In the year 2143 CE, along with my now deceased husband, I helped combat modify three hundred forty-two soldiers who were pivotal in our government winning the final world war. After the global peace treaty of 2146 was signed, those soldiers’ families were told the modification process had become irreversible. To back up that falsehood, modified soldiers were manipulated into acting in ways that made them seem more dangerous than they actually were. The truth is that outside their combat service many didn’t trust the Cyber Soldiers’ humanity to rule over the enhanced cybernetic capabilities we had given to them. Without any testing of this theory, the Cyber Soldiers were deemed a threat by all the members of our global world government. All modified humans—those we call ‘cyborgs’—have been forced to run android-like programming, which makes them appear to be little more than living machines. It is a scientific illusion and a form of human enslavement that must not be allowed to continue.”