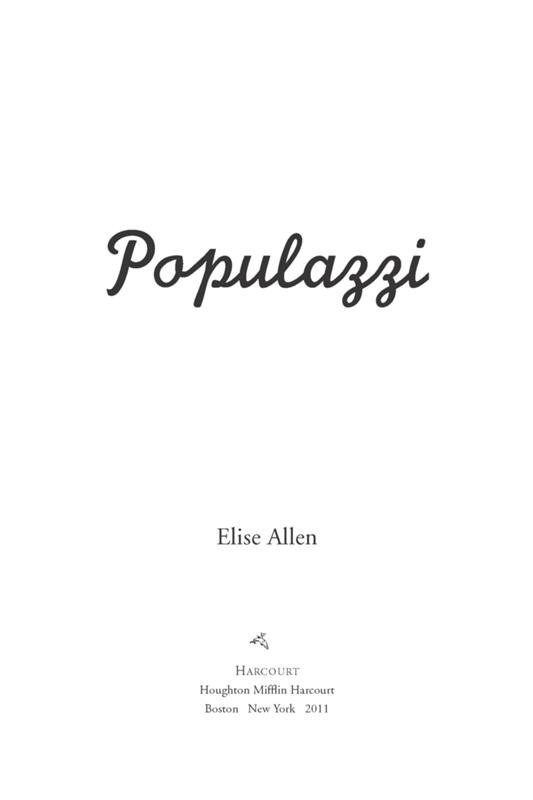 This is a work of fiction. All the names, characters, places, organizations, and events
portrayed in this book are products of the author's imagination. Any resemblance to
any organization, event, or actual person, living or dead, is unintentional.

Harcourt is an imprint of
Houghton Mifflin Harcourt Publishing Company.

Library of Congress Cataloging-in-Publication Data
Allen, Elise.
Populazzi / Elise Allen.
p. cm.
Summary: When awkward, socially inept Cara moves to a new school just before junior year, her
best friend urges her to seize the opportunity and change her life using "The Ladder"âa concept
that will allow her to climb to the top of the social order by transforming herself into the perfect
girlfriend for the most popular boy in school.
ISBN 978-0-547-48153-1
[1. Interpersonal relationsâFiction. 2. PopularityâFiction. 3. High schoolsâFiction.
4. SchoolsâFiction.] I. Title.
PZ7.A42558Po 2011
[Fic]âdc22
2011008437

To Randy, Maddie, and Riley,
the loves of my life

"Don't you see, Cara? This will be the year everything changes!"

I laughed out loud.

I hated to do it. Claudia is my best friend in the universe and has been since kindergarten. Still...

"What?" Claudia asked, but I was already halfway under my bed, dragging out the giant plastic bin in which I keep all my journals, from my first grade Hello Kitty diaries through the leather-bound notebooks I use today. Some would say under my bed isn't the smartest place to hide my most private thoughts and observations. Surely my parents could find them there. What if they wanted to sneak in and read them?

The truth is my parents would never read my journals. Not because they're such saints, but because after sixteen years (twelve, technically, for my stepdad), they're 100 percent confident there's nothing juicy in them. This is part of my problem.

"'Deer Diary,'" I read from Hello Kitty, "'today I go to first grade! It will not be like kindergarten. It will be grate for Claudia and me.'" I held up the page so Claudia could appreciate not only the spelling but also the adorable stick figure drawing of the two of us holding hands, massive grins on our giant bubble heads. Claudia nodded; adorableness noted.

I tossed that diary aside and grabbed a turquoise journal with cover art featuring a plume pen spouting a rainbow of sparkles. "'Dear Diary,'" I read, "'fourth grade was the same as always. It's all about fifth grade.
This
is when everything will change.'" I dropped the journal and plucked up a funky striped notebook in gradations of pink, red, and orange. "'Okay, diary,'" I read, "'tomorrow starts Junior High.
Junior High!
It's a whole new school! Seriouslyâthis is the year everything changes.'" I looked at Claudia. "I could go on."

Claudia says everything dramatically. Her mom read Shakespeare to her insanely early, and she took the "All the world's a stage" thing to heart. Not that she's an attention hound. Unless she's playing her cello, the very idea of being in the spotlight sends her ducking for cover. She's not fake either; it's just that her real-life emotions are maybe ten times larger than other people's.

"I know what you've always said," Claudia continued, "but this year is earth-shatteringly different. You're going to an entirely new school, where nobody knows anything about you. Nor do they know about ... The Incident."

The Incident was pretty much the inciting event in our friendship. It happened on the first day of kindergarten. Ms. Jewel lined up our class for a trek to the bathroomsâ"a potty party"âfirst thing in the morning, but I was way too nervous to do anything but count to ten and come back out again. That meant by halfway through circle time my bladder was so full I was dying, but I was too embarrassed to raise my hand and say anything. Instead I danced in my spot on the floor, madly jouncing my crisscross-applesauced legs and squinching my face super tight. Looking back, I can't believe that Ms. Jewel didn't realize what was happening ... or what
would
happen if she kept ignoring me.

Heather Clinger was the first to notice. She pointed and squealed from across the circle, "EWWWW! That girl peed herself!"

Immediately, the kids on either side of me leaped away screaming, while the rest of the room laughed or sneered. I didn't want to cry, but I couldn't help it. I just felt so small and embarrassed and ashamed...

Until a grinning little girl with super-pale skin and the same two looping black braids she's worn every day of her life cried out, "Look at me! I peed my pants, too!"

The girl was Claudia, and she was sitting right next to Heather, who screamed again. The whole room erupted into chaos. Finally, Ms. Jewel called in an assistant, who took Claudia and me out of the room, cleaned us up, and shoved us into mismatched castoffs from last year's lost and found.

"Were you embarrassed to raise your hand, too?" I asked her.

"No," she said, shaking her braids. "You just seemed sad to be the only one all wet with pee. So I did it with you!"

Just like that, I'd made a best friend for life.

Unfortunately, while our origin story formed an intense bond between Claudia and me, it permanently grossed out everyone else in the class ... all the same people who would follow us through elementary school, junior high, and PennsbrookHigh School. And while it's not like they actively held day one of kindergarten against us, it's pretty tough to kill such a vivid first impression. The Pants-wetters were never going to be allowed among the Populazzi: the most adored of the social elite.

But now Claudia was right: I wouldn't be with those people anymore. The day after sophomore year ended, my family had moved from Yardley to Malvernâabout an hour and several Pennsylvania Turnpike exits away. My new classmates all went to Chrysella Prep, a charter school my parents kept telling me was "known for both the teachers' and students' creative thinking and extreme academic excellence." They'd shown me a brochure about it called "The Charter School Difference," but it didn't seem terribly different from Pennsbrook at all ... except for the fact that every single student there was a complete stranger whom I'd meet for the very first time in just three days, fifteen hours, twenty-five minutes, and thirty-one seconds.

Not that I was freaking out about it or anything.

Claudia leaned toward me, her dark eyes intense. "You have the chance to rewrite your life story. No, not the chance ... Reinventing yourself is your
destiny!
It's in the name of your school: Chrysella, the chrysalis from which you will emerge, no more a pupa, now a butterfly!"

Actually, the school was named after an ex-student named Chrys who'd died from some rare and hideous disease, but I couldn't tell that to Claudia. She was on a poetic roll. I was fairly certain her last phrase had been in iambic pentameter.

"You can be anything at Chrysella," Claudia continued. "You can break into their Populazzi. You can even be the
Supreme
Populazzi: The Most Popular Girl in School."

That's when I really should have laughed. The Incident notwithstanding, I have never been the Supreme Populazzi type.It's not that I don't want the title; who wouldn't? SPs never get laughed at for personal quirks like navigating the halls with their nose in a book. SPs never feel shy or insecure; they can walk into any room and know that everyone there is dying to see them. SPs never have to pine for the guys they like; those guys pursue
them.

So I should have laughed, but I didn't. I recognized the look on Claudia's face.

"I have a
plan,
" she amended. She reached into her fuchsia, faux-leather shoulder bag and pulled out a huge, overstuffed yellow binder, which she thudded down in front of me. "I hereby present: the Ladder."

Sure enough, there it was on the front of the binder in black-Sharpie calligraphy: "The Ladder."

"Your ticket to a new life. The Ladder is how you climb from one tier of the Popularity Tower to another."

"You
can't
climb from one tier of the Popularity Tower to another."

That was the whole point of the Popularity Tower. Claudia and I had named it and all of its tiers back in seventh grade. There were kids who were more and less popular before that, but by seventh grade everyone was cemented into a specific and universally accepted Tower position. Like it or not, you were either a Happy Hopeless, Cubby Crew, DangerZone, Penultimate Populazzi, or Supreme Populazzi. You didn't get to choose, and you didn't get to change.

"That's what we always thought," Claudia said. "But there
is
a Ladder. Its rungs are relationships. You can climb into a new Tower tier if you have a boyfriend there. You get that boy friend by already having one in a slightly lower tier. Having a boyfriend makes you desirable."

"Okay ... but I don't have a boyfriend." I said it like I was talking to a mental patient. It's not like she didn't know.

"Not
yet,
" Claudia said. "When you get to school, you target a first boyfriend: someone who's not a total loser but is low enough on the Tower that he's easy to get. From there, you date your way up higher and higher until by the end of the year you've achieved the ultimate goal: Supreme Populazzi and the title of Junior Prom Queen. Your date for that event? The male Supreme Populazziâthe most spectacular guy in the entire junior class."

Claudia glowed with excitement. She loved this idea. I was tempted to take her temperature. And maybe check her pupils for concussion.

"Claude, I've never had a boyfriend. How am I supposed to 'target' some guy and get him to go out with me?"

"That's the beauty of a brand-new school!" Claudia said. "You can be
anyone,
including
exactly
what each guy you target thinks is the perfect girlfriend."

"So I lie to these guys, use them, and that makes me popular?"

"You don't lie. You highlight different aspects of your actual personality. And you don't use anyone. They're
guys.
Guys are psyched to have girlfriends. You'll be helping them. Just like you, they'll be more desirable when they're part of a couple. When you're ready to move on, it'll be easy for them to get someone new."

It was a lot of insight for someone with as much guy experience as I had. In other words, next to none. Claudia
had
seen a penis, but it was attached to her first cousin Rob, who's fourteen and a total dork. His idea of biting satire is to tape googly eyes and paper elephant ears on the front of his jeans, then let "the trunk" hang out of his fly.

I, on the other hand, have never in my life seen a penis. I've tried to imagine what that eventual momentous occasion might be like, and even spent a whole class period once staring at the word in my notebook, but all I pictured were other words you could make from its letters. Like SPINE. And SNIPE. And E-SNIP, which seemed like a good name for an online circumcision service.

"You have doubts," Claudia said. "You shouldn't. I've done the research." She nodded to the binder. "Open it."

I did. The book overflowed with reams of magazine articles, written notes, and Xeroxes of book and newspaper pages.

Revenge of the Snob Squad by Julie Anne Peters
Dirty Fracking Business by Peter Ralph
The Boyfriend Sessions by Belinda Williams
The Rock Season by R.L. Merrill
The Downfall of a Good Girl by Kimberly Lang
A Witch in Love by Ruth Warburton
Out of Character by Diana Miller
The Hired Hero by Pickens, Andrea
Angel of Redemption by J. A. Little
Wilder by Christina Dodd