Princess without a Palace: A King Thrushbeard Fairy Tale 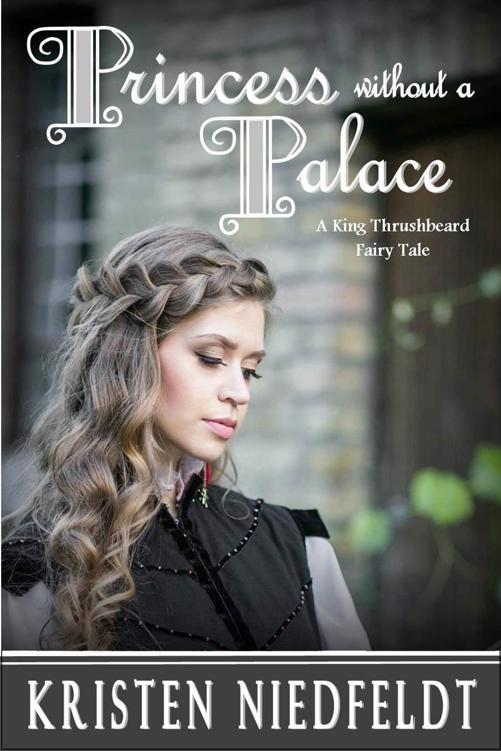 Once Upon a Time

Princess Liesel is adamant that the last
thing she would ever want is to have to leave her splendid palace and marry a
prince. But after she scorns one too many suitors, her father loses his temper
with her spoiled ways and declares that she must marry the next man who dares
to seek her hand! Unfortunately for her, the next man who proposes—albeit
unintentionally—is only a humble, traveling minstrel.

Now, cast off and penniless, she finds
herself at the mercy of her handsome betrothed who intends for her to become a
proper peasant. But after a lifetime of being pampered, ordinary chores and
tasks are not as easy as she expected, and she soon realizes she will need her
prospective husband’s help if she hopes to salvage anything of her future.

Will the two strangers be able to find a
way to work together and perhaps free themselves from their forced betrothal?
Or might they find that “happily ever afters” sometimes happen in unexpected
ways …

A retelling of the timeless Grimm fairy tale, “King
Thrushbeard.”

*This book is a clean and proper
romance.

Princess
without a Palace

This is
a work of fiction. Names, characters, places and events are the product of the
author’s imagination.

All
rights reserved. No part of this book may be reproduced or transmitted in any
form or by any means without prior written permission from the author.

Thank you for all the years you spent

listening to and reading all of my stories!

Once upon a time…

I
t
was a mistake to steal the shoes
, Liesel thought to
herself as she nervously stood beside the wagon that was being prepared for her
departure. Every now and then, a royal guard would glance her way and she would
reflexively shift her weight from foot to foot, certain he could sense her
consuming guilt.

She looked straight ahead to avoid eye
contact with any of the guards positioned around her. She didn’t know how she
would survive the shame if she were caught. She knew her father well enough to
know that he would confiscate the shoes, burn them before her eyes, and send
her away barefoot if he were to discover she was wearing them. But even knowing
this, she still hadn’t been able to resist the temptation to slip them on that
morning. After all, didn’t she deserve at least a little sense of dignity?

She heard the heavy steps of a man
approaching from behind, but she refused to turn to acknowledge his arrival.
Even without glancing his way, she knew exactly who he was. Tears burned in her
eyes as she silently cursed, for what was probably the thousandth time, the terrible
fortune that had brought his arrival into the kingdom. All it had taken was one
line, one disastrously unfortunate sentence, and suddenly, he had changed her
life forever.

And she would never forgive him for it.

She blinked rapidly to dispel the
appearance of excess moisture from her eyes a moment before he came to stand
before her.

“Are you ready then?” he questioned in
his deep voice.

She raised her chin and gave him a curt
nod, refusing to answer him verbally.

“Then you’ve said your goodbyes?”

“I said I am ready, didn’t I?” she
reminded him coolly.

He extended his arm toward the wagon.
“Then shall we be off?”

Pursing her trembling lips together, she
looked down at the ground, afraid of what might happen if she dared to look
around at her surroundings one last time. She wasn’t ready to leave, but she
had no choice.

Her orders to leave were final.

The man took a step forward and placed a
hand on her elbow to help her up into the wagon, but she yanked her arm away.
Turning from him, she grasped the rough, wooden side of the frame, but before
she had a chance to raise her foot to the lowest step, the man’s strong hands
circled around her waist and he swiftly hoisted her onto the wagon bench.

Her eyes blazed down on him and she
attempted to transform her surprise into a scowl. “I can climb onto the wagon
on my own just fine, you know.”

“But I wouldn’t want you to exhaust
yourself so soon, when we have so far to travel today.”

She clenched her jaw in anger. How dare
he imply that she should be so weak!

He held her stubborn stare for a long
moment before his gaze dropped to her feet.

Heat immediately sprang to her cheeks.
Her shoes! His impertinence had made her forget all about her bright purple
shoes which had been dangling for anyone to see!

She hastened to cover them again with
her coarse skirts. Scanning the vicinity, she was relieved to see that no one
in the area seemed to have noticed them.

No one, except the man standing at her
feet.

She despised the amused eyebrow he
raised at her. With eyes narrowed in a silent threat, she sternly warned him
not to reveal her.

He dismissed her disdainful look with a
smile.

Oh, how he infuriated her!

She crossed her arms and sat a little
straighter in her seat. She refused to care what this man thought of her. Even
if he happened to be the man she was now condemned to marry.

She would not let it matter to her what
he thought of her fancy shoes.

He was still shaking his head in apparent
disbelief as he checked on his horse. Defiantly, she rubbed her toes against the
velvet insides and relished their softness.

She no longer questioned her brazen
choice. She was glad she had stolen them from her castle room, because no
matter what else laid in store for her in her now extremely uncertain future
life, she was sure of one thing.

She was determined to ensure that this
man–her betrothed–would never forget:

She had been born, and would forever
remain, a princess.

P
rincess
Liesel stretched out along the bench beneath her bedroom window and glanced out
at the mountains in the distance. Even though she had sketched this same scene
countless times before, she couldn’t help but draw it again now. She loved the
soaring mountains and grassy meadows like they were a part of her own soul.

While she worked on shading the shadows
that were creeping up the mountain slopes, a small visitor flew in and perched
on her windowsill. Pecking at the edge of the paper on her knees, the little
bird demanded to be noticed.

“Shoo,” Liesel ordered with a dismissive
flick of her hand.

Realizing that the bird still lingered,
she glanced up to see the small tilting head studying her. She was beginning to
feel unnerved by its persistent stare when it suddenly turned and flew away. Liesel
recognized the bird’s speckled breast and drooping beak as that of a song
thrush, and watched with regret as he disappeared beyond one of the stone
towers. Ordering him away, she had robbed herself of any chance of hearing his
beautiful song.

Perhaps the little bird would come back.
She sincerely hoped he would. Such a picturesque evening deserved musical
accompaniment.

Relegating her regret to a farther part
of her mind, she returned to her drawing and began sketching the clouds in the
sky. Light and wispy, she was pleased to note that the sky was clear of any
signs of impending storms.

She continued with her sketch for
several quiet moments and then looked out at the valley again. She almost
didn’t notice the subtle change in the distance until her eyes settled on the
edge of the valley, and then her charcoal dropped with a sudden thud from her
hand. She couldn’t believe what she was seeing. Thin gray streams of smoke were
curling into the air from the entrance of the kingdom’s northern mountain pass.

Her pulse accelerated as a deep fear
took root within her.

She had to admit she was surprised by
the degree of terror she felt when she was almost certain she knew who was
coming.

It was just that she hadn’t expected to
see this sight so soon.

When torch-bearing soldiers began filing
into the valley in disciplined rows only moments later, she sprang to her feet and
looked around frantically. Where could she possibly flee?

A trumpet from one of the castle’s
tallest towers pierced the air with two syncopated blasts, and the inhabitants
within the castle propelled themselves into action.

Liesel listened as the outside corridors
were suddenly flooded with servants rushing about in a frantic frenzy. She knew
her mother would expect her to help with the preparations, but Liesel recoiled
at the thought of joining such a chaotic scene.

Instead, she ran across the room and
jumped into her bed.

Knowing her door would likely open at
any moment, she quickly threw her bed covers over her head to hide her face
from sight.

She was not concealed a moment too soon.

Liesel inhaled a sharp breath and held
it tight within her chest as her door swung open and crashed back against the
stone wall.

“Liesel, are you in here?” her sister
called out breathlessly.

She listened to quick footsteps cross
the floor until they stopped just a few inches away. “Liesel, what are you
doing in bed so early? Are you unwell?” There was another pause before she felt
her sister’s hand shake her shoulder. “Liesel?”

The younger princess waited a few
seconds before she turned on her heels and hurried back out of the room. From
under her covers, Liesel couldn’t make out all of the muffled words her sister
grumbled as she exited, but she was pretty certain she heard her sister,
Adelaide, note that only Liesel could sleep through the most exciting day of
the summer.

Ironically, Liesel knew that she would
most likely not sleep at all this night. How could she when she knew what the
returning army meant for her future?

For one thing, it meant that her father
was finally home. And with his return, she could only pray that he had been too
preoccupied with his distant wars to remember his parting promise to her.

Closing her eyes, she dared to allow
herself to hope. Perhaps it had merely been an empty threat. Perhaps her father
had no intention of actually following through with it.

She squeezed her eyes tighter in an
attempt to hold onto that hope.