Read Prospero's Cell: A Guide to the Landscape and Manners of the Island of Corfu Online

Prospero's Cell: A Guide to the Landscape and Manners of the Island of Corfu 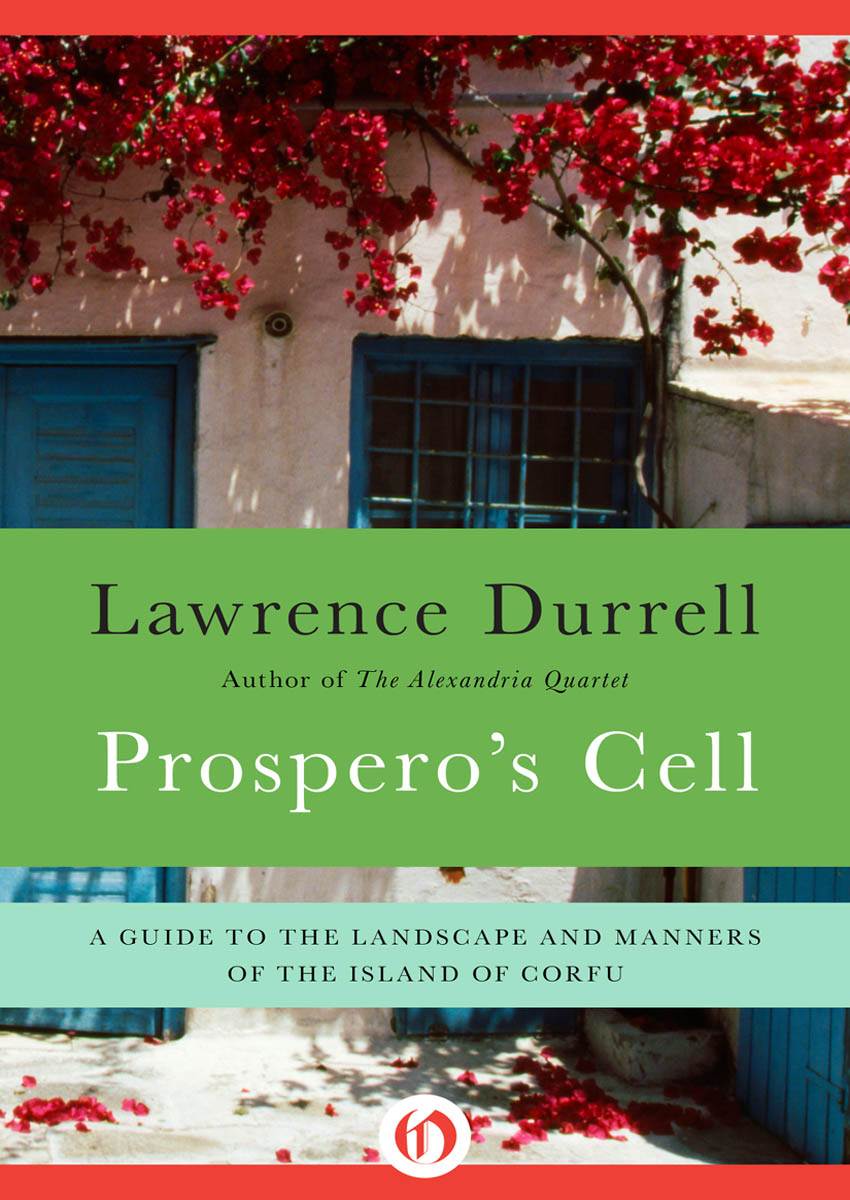 “Four of the characters in this book are real people
and appear here by their own consent.

To the four of them—

it is dedicated by the author

in love and admiration.

drawn by Bernard J. Palmer after a copy of a late Portolano engraved in Italy by Lucini for Robert Dudley, 1646

View from the hill of Santi Deka, Corfu

View from the village of the Ascension, Corfu

View from the Benizza Road, near Gastouri, Corfu

T
HIS BOOK WAS
composed in Alexandria after the fall of Greece and my own escape into Egypt via Crete. A mixture of piety and overwhelming nostalgia motivated me to set down what I knew about the island which had for several years been my home, and which in those dark winters of 1941–2 seemed a place I would never see again in this life. One felt this about the whole of Europe at that time, so overwhelming were the victories of the German armies and so feeble the response of the socialist-torn democracies. And even if we succeeded in beating Hitler after a fifteen-year war … what then? Europe had had it, and with Europe Greece as well. As for this brilliant little speck of an island in the Ionian, what future could one predict for it? It was then the daily target of the Italian air force.

I set about trying to memorize its beauties before they faded from my mind and ceased to spur the poems I was then writing. In Alexandria a hospitable Greek business man made me free of an excellent library of reference books and I used his books, not so much as crutches, but as provocations to memory, correcting myself by this precious information so that the book would not only be a poetic evocation but also a sort of guide to the place.

Its reception in mid war was a surprising and enjoyable thing for through it I discovered many other people who adored Corfu as much as I had. And its continuing success down the years has always touched me like a sort of confirmation that my dreams of being a writer when I was young were worth holding on to. Prospero makes me feel the effort and the trouble were worthwhile.

“No tongue: all eyes: be silent.”
The Tempest

S
OME WHERE BETWEEN CALABRIA
and Corfu the blue really begins. All the way across Italy ‘you find yourself moving through a landscape severely domesticated—each valley laid out after the architect’s pattern, brilliantly lighted, human. But once you strike out from the flat and desolate Calabrian mainland towards the sea, you are aware of a change in the heart of things: aware of the horizon beginning to stain at the rim of the world: aware of
islands
coming out of the darkness to meet you.

In the morning you wake to the taste of snow on
the air, and climbing the companion-ladder, suddenly enter the penumbra of shadow cast by the Albanian mountains—each wearing its cracked crown of snow—desolate and repudiating stone.

A peninsula nipped off while red hot and allowed to cool into an antarctica of lava. You are aware not so much of a landscape coming to meet you invisibly over those blue miles of water as of a climate. You enter Greece as one might enter a dark crystal; the form of things becomes irregular, refracted. Mirages suddenly swallow islands, and wherever you look the trembling curtain of the atmosphere deceives.

Other countries may offer you discoveries in manners or lore or landscape; Greece offers you something harder—the discovery of yourself.

It is a sophism to imagine that there is any strict dividing line between the waking world and the world of dreams. N. and I, for example, are confused by the sense of several contemporaneous lives being lived inside us; the sensation of being mere points of reference for space and time. We have chosen Corcyra perhaps because it is an anteroom to Aegean Greece with its smoke-grey volcanic turtlebacks lying low against the ceiling of heaven. Corcyra is all Venetian blue and gold—and utterly spoilt by the sun. Its richness cloys and enervates. The southern valleys are painted out boldly in heavy brush-strokes of yellow and red
while the Judas trees punctuate the roads with their dusty purple explosions. Everywhere you go you can lie down on grass; and even the bare northern reaches of the island are rich in olives and mineral springs.

The architecture of the town is Venetian; the houses above the old port are built up elegantly into slim tiers with narrow alleys and colonnades running between them; red, yellow, pink, umber—a jumble of pastel shades which the moonlight transforms into a dazzling white city built for a wedding cake. There are other curiosities; the remains of a Venetian aristocracy living in overgrown baronial mansions, buried deep in the country and surrounded by cypresses. A patron saint of great antiquity who lies, clad in beautifully embroidered slippers, in a great silver casket, apt for the performance of miracles.

It is April and we have taken an old fisherman’s house in the extreme north of the island—Kalamai. Ten sea-miles from the town, and some thirty kilometers by road, it offers all the charms of seclusion. A white house set like a dice on a rock already venerable with the scars of wind and water. The hill runs clear up into the sky behind it, so that the cypresses and olives overhang this room in which I sit and write. We are upon a bare promontory with its beautiful clean
surface of metamorphic stone covered in olive and ilex: in the shape of a mons pubis. This is become our unregretted home. A world. Corcyra.

The books have arrived by water. Confusion, adjectives, smoke, and the deafening pumping of the wheezy Diesel engine. Then the caique staggered off in the direction of St. Stephano and the Forty Saints, where the crew will gorge themselves on melons and fall asleep in their coarse woollen vests, one on top of the other, like a litter of cats, under the ikon of St. Spiridion of Holy Memory. We are depending upon this daily caique for our provisions.

Climb to Vigla in the time of cherries and look down. You will see that the island lies against the mainland roughly in the form of a sickle. On the landward side you have a great bay, noble and serene, and almost completely landlocked. Northward the tip of the sickle almost touches Albania and here the troubled blue of the Ionian is sucked harshly between ribs of limestone and spits of sand. Kalamai fronts the Albanian foothills, and into it the water races as into a swimming pool: a milky ferocious green when the north wind curdles it.

The cape opposite is bald; a wilderness of rock-thistle and melancholy asphodel—the drear sea-squill. It was on a ringing spring day that we discovered the house. The sky lay in a heroic blue arc as we came down the stone ladder. I remember N. saying distinctly to Theodore: “But the quietness alone makes it another country.” We looked through the hanging screen of olive-branches on to the white sea wall with fishing tackle drying on it. A neglected balcony. The floors were cold. Fowls clucked softly in the gloom where the great olive-press lay, waiting its season. A cypress stood motionless—as if at the gates of the underworld. We shivered and sat on the white rock to eat, looking down at our own faces in the motionless sea. You will think it strange to have come all the way from England to this fine Grecian promontory where our only company can be rock, air, sky—and all the elementals. In letters home N. says we have been cultivating the tragic sense. There is no explanation. It is enough to record that everything is exactly as the fortuneteller said it would be. White house, white rock, friends, and a narrow style of loving: and perhaps a book which will grow out of these scraps, as from the rubbish of these old Venetian tombs the cypress cracks the slabs at last and rises up fresh and green.

We are lucky in our friends. Two of them seem of almost mythological quality—Ivan Zarian and the arcane professor of broken bones Theodore Stephanides. Zarian is grey, eminent and imposing with his mane of hair and his habit of conducting himself as he intones his latest love song; he claims to be Armenia’s greatest poet with a firmness and modesty that completely charm. He has spent nearly two years here intoning his work to anyone who would listen, and making an exhaustive study of the island wines. He has managed to convert the top floor of the St. George Hotel into a workroom—indeed a wilderness of manuscript and paintings. Here, looking out upon the blunt fortifications of the Eastern Fort, and pausing from time to time to relish a glass of wine, he compiles his literary column for some new world Armenian newspapers. On Friday, the 8th of March, he sent me a friendly message reading:

Dear Durrell: we miss you but most your beautiful wife. Dear, boy, yes, certainly I have immortalized you this week. I have written this epoch of our lives. Great love from Zarian.

Zarian walks as if he wears a heavy cloak. A copious and extravagant figure, it was he who instituted our literary meetings once a week at the “Sign of the Partridge,” off the main square of the town. Zarian
possesses an extraordinary typewriter which enables him, by simply revolving the bed of type, to write in French and Italian as well as in Armenian and Russian. At these weekly meetings he rises to his feet and, in a beautifully controlled voice, recites the “to be or not to be” speech from Hamlet, first in French, and then in Armenian, Russian, Italian, German and Spanish. He scorns to learn English properly.