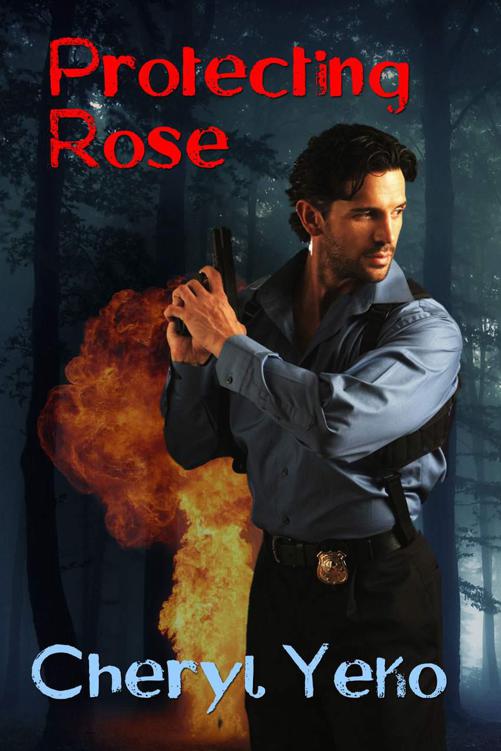 This book is a work of fiction. The names, characters, places, and incidents are the products of the author’s imagination or are used fictitiously. Any resemblance to actual events, business establishments, locales, or persons, living or dead, is entirely coincidental.

All rights reserved. No part of this publication may be reproduced, stored in a retrieval system, or transmitted in any form or by any means (electronic, mechanical, photocopying, recording, or otherwise) without the priority written permission of both the copyright owner and the publisher. The only exception is brief quotations in printed reviews.

I dedicate this book to my husband, Pat.

He is my hero and my inspiration.

I will always love you.

I want to thank my family for their encouragement and my husband for his understanding and patience while I concentrated on writing
Protecting Rose
, neglecting nearly everything else until it was finished.

I especially want to thank my daughter, Michelle, for her willingness to read and reread every chapter in painstaking detail. And finally, my mother, who thought my rough draft was the most fantastic book she’d ever read and just knew it would be a bestseller.

“Rick.” Nate whispered into the microphone tucked inside his collar. “Be ready to move. Davis left Chicago over an hour ago and should be here soon.” He studied the layout of the warehouse where the stolen cars were stored. The rancid stench of grease, dirt, and sweat permeated the air. Footsteps echoed throughout the vast building.

Car cloning, he snorted. It seemed like some dickhead was always coming up with a new and inventive way to make a dishonest buck. Find two identical cars in two different states. Steal one, copy the vehicle identification number from the other car, and forge the necessary papers and presto. You have a profitable, nearly foolproof business.

It had taken Nate almost a year to infiltrate the ring and another three months to gain the trust of Ralph Davis, the mastermind behind the Chicago-based operation. The head of the snake so to speak. Take him out, and the entire body would fall.

Bright rays filtered through the cracked warehouse windows, where the sun dipped behind the water tower. His body tensed in anticipation of the upcoming showdown. He inhaled deeply, tightening his muscles, then relaxing them. A technique he’d perfected during his long deployment in Iraq.

This would be a piece of cake. He had total confidence in Rick Smyth’s command and trusted him with his life. He’d served with Rick in Iraq, and they had years of experience in covering each other’s ass. Just the same, it was an extremely volatile situation and anything could happen.

Nate straightened to his full height. His body grew taut when the warehouse doors rose. Davis’ car pulled in. Showtime! With deep concentration, he tilted his head to the left until his neck made a popping sound and then to the right as the scene unfolded.

Davis exited the car, followed by a man Nate recognized. Dammit! His gut dropped in apprehension. He’d arrested Jones a few years back for...for...something. Hell if he could remember what. Shit was about to hit the fan.

“Rick,” Nate whispered. “My cover’s about to be blown.”

Jones looked around the warehouse until his gaze finally settled on him. Nate’s body tightened as he braced for the fallout.

“What the hell...” Jones bellowed, pointing his finger at Nate. “That’s a fuckin’ cop!”

Davis appeared stunned. Then his furious eyes turned toward him.

Nate gave him a wry smile and shrugged.

For an instant, everyone froze. Then all hell broke loose.

Nate reached for his Glock and dove behind a car, trying not to get his ass blown off as Davis’ men opened fire.

“Now, Rick!” Nate slammed his back up against the car that shielded him. Bullets rained down around him as the sound of gunfire reverberated through the building. Multiple explosions rocked the air with enough force to shake his balls when the warehouse doors blew open.

Rick and his team moved in to surround Davis and his men.

“Drop your weapons,” Rick demanded. He took aim at Davis, his steely eyes never moving from his target, the red light from his riflescope visible on Davis’ chest. “Just give me a reason,” Rick said through gritted teeth. “We could save the taxpayers a helluva lot of money. Right here...right now.”

“Do it!” Davis ordered his men. Dropping his gun to the ground, he raised his hands above his head. “They’ve got nothing on me,” he said with a sneer. He glared at Nate. “My lawyers will have me out in twenty-four hours.”

Nate picked himself up from the floor and brushed the dirt and grime off his clothes. “Yeah, yeah...in your dreams, asshole.” He made his way over to Rick and slapped him on the back. “Did we get ‘em all?”

Nate nodded and his shoulders relaxed. He felt his face split into a grin. “Cool.”

He strolled toward the exit and gave Davis the middle-finger salute as he passed.

Nate glanced at the sky and turned off the freeway. Dark storm clouds rolled overhead and he wondered if he would make it home before the rain hit. Adrenaline still coursed through his veins from the excitement of the warehouse bust and he considered giving Rick a call to meet him at Charlie’s Pub for a celebratory beer.

He adjusted his rearview mirror and spotted a black Chevy Impala closing the distance behind him. At the last second, he swerved sharply to the left to avoid a collision as the car raced past. He caught a glimpse of a young woman behind the wheel, a panicked expression on her face as the car careened off the side of the road and crashed through the wooden fence.

With a quick turn of the wheel, he slammed on his brakes and brought his car to a screeching halt. His hands gripped the steering wheel and his gut clenched when all he could do was sit there and watch the Chevy tip to the left, and fall over the embankment. The sound of crushing metal filled the air when the car rolled down the hill, followed by the sound of a heavy thud when it finally came to rest.

Nate grabbed his cell phone off the seat and called 911 as he ran to the spot where the car had disappeared. It had landed upright with the driver’s side wedged against a tree halfway down the hill, the roof torn open like a tin can. The smell of gas filled the air. Nate leaped over the broken fence and slipped on the loose gravel that covered the hillside. He righted himself and stumbled down the steep embankment.

The woman lay slumped forward, straining against her seatbelt. Nate yanked open the damaged passenger door. He crawled in and moved the deflated airbag out of his way, placing her against the seat before unlatching her seatbelt. A crack of thunder reverberated in the air.

Barely conscious, she moaned softly and lifted a shaky hand to her head. He assessed her injuries. She was marred with bruises and her head bled from a cut above her left temple.

A fire ignited under the hood and billowed. Smoke flooded the car. The strong odor of gas hung in the air. His heart raced. Grasping her under the arms, he eased her back toward the door.

“I’m sorry, sweetheart,” he murmured, “but we need to get you out of this car.”

A bright bolt of lightning ripped across the sky. Hungry flames, fed by the wind, spread through the car. He pulled her from the vehicle and cradled her in his arms. With a burst of adrenaline, he raced toward the coverage of the trees at the bottom of the hill. He sprinted the last few feet to safety before the car exploded behind him with a thunderous roar.

The shock of the blast nearly knocked him to the ground and he barely managed to stay on his feet as he stumbled forward. He clasped the woman to his chest and dove behind a line of trees. Nate turned at the last moment to take the brunt of the impact before rolling over to shield her with his body. The heat from the explosion enveloped them, and debris rained to the ground. When he lifted his head, the car was engulfed in flames.

Nate glanced down in time to see her eyes flutter open. His pulse raced when he looked into a pair of breathtakingly beautiful brown eyes, sheltered by long sweeping lashes. The warm brown and gold shades reminded him of whipped chocolate and caramel. She was young and slender, with curly auburn hair that fell in thick shimmering waves around her delicate features.

“Where are you hurt?” He frowned when he noted a bruise on her cheek darker than the rest. He ran his hands over her, searching for injuries.

She gasped and struggled against him. Her large doe eyes filled with confusion and fear.

“Whoa there. Take it easy, sweetheart.” Nate grasped her wrists to keep her from moving. “You need to remain still and wait for the paramedics.”

She cried out in a pained gasp.

Nate froze and eased his grip. He cursed when he saw what appeared to be rope burns circling her wrists. Eyebrows furrowed, he released her and rolled to the side. He glanced down the length of her body to see the same red marks at her ankles.