Anyway, I now have an apartment in Copacabana, with a terrace looking out on one of the hillside favelas, and a one-block walk to the beach. I am piled up here with Sandy and a maid ($6 a month) and all manner of whips and guns and woven things picked up in 6 months of hard traveling. Rio is a hell of a city and impossible to describe in a few lines. I'll be here another six months, anyway. Same address. Living is cheap but it may not last. We have room (not much) if you feel like giving it a whirl. Send word, and piss, if possible, from at least a modest height. It may be the only way.

Harrington was a woman newspaper reporter Thompson had met in San Francisco. They maintained an intimate correspondence in the years to come
.

Ah, Daryl, Daryl, I always want to write you and always feel guilty when I don't, but since I got down to this rotten continent both want and guilt have given way to necessity and I find myself forever writing double-spaced manuscripts and not much else. Jesus I worry about you there in NY, that rotten pit, and Sandy is here making me feel guilty for even worrying. I live about six lives and every time they touch it means trouble. If only I had more goddamn time so I could arrange things, but time being as it is, I have to pack it all in together and try to manage as best as possible. I've been gone for more than a month to Montevideo, Buenos Aires and AsunciÃ³n, and got back here to find Robert Kennedy slipping in the back door and causing panic with the press corps, all of whom raced up to Brasilia today to get the latest mimeographed statement while I stay here in Copacabana and run for two hours on the beach to work off some of this awful beerfat.

How did your filthy job-hunt come out? I can't imagine anything worse than teaching school in New York. You ask for “long-range suggestions”
and I know this will sound queer but I really suggest you join the Peace Corps. I would if I weren't such a reprobate, but then I can be twice as effective for the same idea by writing as I could by joining. But I'm seriousâand don't think I've gone gung-ho because I came down here thinking the PC was a bag of crap but now I think it's the only serious and decent effort the U.S. is making in Latin America or anywhere else. In addition to that I keep running across PRIESTS of all goddamn things who really make me feel like a soft-life punk. I go out in the wilds and feel pretty proud of myself for managing to hang on for several days, and then I run across a priest who has been there for three years and two guys from the PC who've been there eight months. And I feel pretty cheap. About the best I can say for myself is that I know more about South America than any three people in the Rio Foreign Correspondents Associationâof which I am a member, yeahâand that is without really trying.

The PC, I guess, is not so good for what it is but for what it can be if you really give it a ride. I have met a lot of punks and fools and jackasses in the thing, but I have also met a lot of people who've made me want to shake their hand and for me that is a damned rare feeling.

But I don't want to ramble or preach here; it's Christmas up there, I guess, and if you want to see how I feel about it try to get hold of the Xmas issue of the
Observer
. The bastards will probably rewrite it for Valentine's Day, but I wrote it for Xmas and if it comes out this week it should pretty much look like I wrote it. I want to get back and do some shooting and drive around the country a bit and write about queer things. I'm pushing now for a run back to the States around March 1, just to amble around. If you're there in NY I definitely want to see you. Maybe, if you have time, we can drive somewhere into the back country and shoot crows. All the way to Aspen, shooting crows the whole way. Your feeling about driving across the country is pale beside mine after being away this long. If I could do it now I'd accept it as a Religious Experienceâwhatever in hell that is. Don't wait two months to answer this; I'm losing touch with the decent people of the world. Write soon, Love, Hunter. 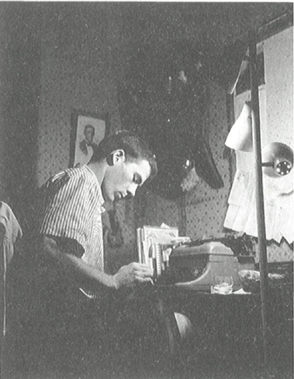 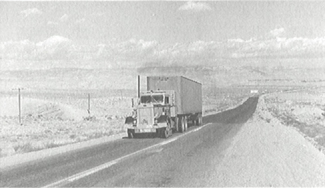 On his way to the West Coast Thompson took hundreds of photographs hoping to catch the essence of the
On the Road
experience
. (P
HOTO BY
H
UNTER
S. T
HOMPSON; COURTESY OF
HST C
OLLECTION
) 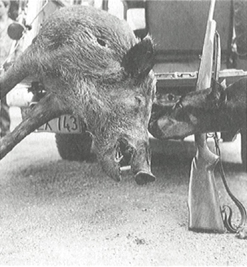 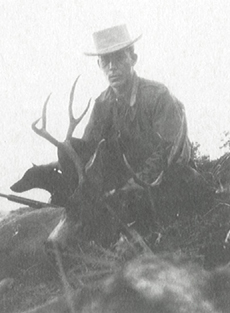 1
. Jenny Newâa Trinidadianâwas living with Jo Hudson in Big Sur. Thompson planned to stay with her parents for a while.

2
. Robert Bingham was an editor with
The Reporter
magazine 1948â1964. In 1960 Thompson had pitched him a story on San Francisco's “woeful” newspaper situation.

3
. Don Cooke, a Louisville friend Thompson met in the Athenaeum Literary Association. He lived across the street from Semonin.

6
. Jacques Chambrun was a literary agent.

9
. A gifted photojournalist, Bone had worked with Thompson at the
Middletown Daily Record
and was his roommate in San Juan.

10
. Bill Williamson was editor of the
Brazil Herald
, the leading English-language newspaper in Latin America.

11
. The
National Observer
, just founded by the Dow Jones Company.

12
. Mike Alexis was a photographer for the Puerto Rican News Service.

13
. The model Hunter had fallen for in Aruba looked like Dana Kennedy.

15
. Eugene McGarr was in Morocco.

17
. PIX was one of the largest photo agencies in New York. Thompson often sold them his work.

18
. Semonin had sent Thompson a newspaper article he'd read about nuns being raped in Colombia.

19
. W. R. Grace and Company had served as Thompson's entrÃ©e to Latin America and also cashed checks for him.

20
. Jomo Kenyata (1889â1978), an African nationalist leader, was the first president of independent Kenya (1964â78). Under his leadership Kenya followed a pro-Western course.

When the cold Andean dusk comes down on Cuzco, the waiters hurry to shut the venetian blinds in the lounge of the big hotel in the middle of town. They do it because the Indians come up on the stone porch and stare at the people inside. It tends to make tourists uncomfortable, so the blinds are pulled. The tall, oak-panelled room immediately seems more cheerful.

âHunter S. Thompson,
“The Inca of the Andes: He Haunts
the Ruins of His Once-Great Empire,”
National Observer
, June 10, 1963

Hudson, still in Big Sur, kept threatening to sail to Rio if he ever finished building his boat
.

Well Jack, I'm getting fat and I need the big action. To put things in a nut-shell, I am living high in a fine town but not really enjoying it because there is nobody here with any balls. If you blew in with a rack of guns, a boat offshore, and all manner of hairy schemes in your brain, I think we could stir up enough noise to satisfy us both. There is a shortage of money, as always, but on a different level than before. One of my worries now is whether or not to give the maid a raiseâfrom $6 a month, to $7.50. It's a bitch of a problem. I recently swung through Manned Wolf territory, but didn't get your intelligence until my return, so I missed the animals. I am so fucking involved in politics, etc. that I don't have much time for the oddball stuff that is really the most important. I am making a decent living with prospects of a better one, but the temptation is to pare it down and forget this political shit and concentrate on the business. I am trying now to write myself into a position to grab off a jeep for movement into the interior. With a boat in the bay and a jeep on the shore we'd be master of all we surveyed. Brazil is immense, and all the bigger because of no roads or communications to the interior. Last night (new year's eve) we went out on the beach to watch the Macumba (voodoo) ceremonies. Man, it would have curled your hair. And they're talking about civilizing these people. For god's sake, bring MAGNUMS.