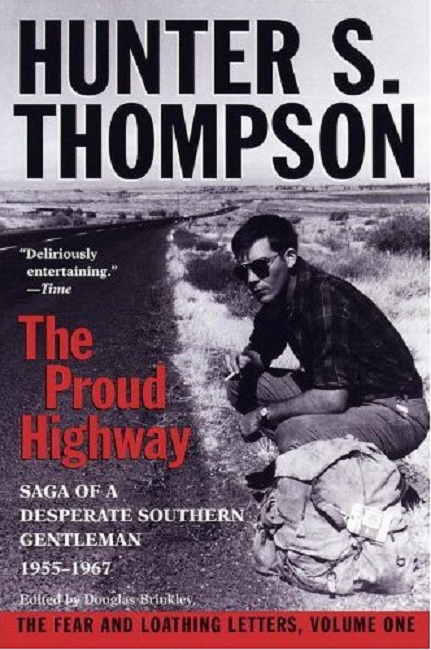 “ONE OF THE GREATEST AMERICAN WRITERS OF THE 20TH CENTURY,

both for his vibrant prose style and his career-long autopsy on the death of the American dream.”

“Extraordinary. Thompson was burning with a lovely light that seared these letters with wit, wonder, and insight These letters could serve as mileposts along the way of where we've been and where we are”

“Another insightful masterpiece from the finest southern gentleman since Colonel Harland Sanders. Read these letters, but do not, under any circumstances, give this man your number.”

“HST takes the air out of airmail and replaces it with pure, compressed, explosive hydrogen (plus laughing gas). You've never gotten any letters like theseâunless you're Abelard and Heloise, in which case you're castrated and dead.”

“Some of the finest political and social writing of our times.”

“Perhaps the most honest writer we have. His letters make clear that he doesn't lieâhe simply tells outsized truths that most people are so used to screening out that we have to laugh or shrug them off as exaggeration.”

“Hunter S. Thompson again proves himself a great American writerÂ â¦Â
The Proud Highway
is something of an adventure story, the tale of a man who insisted, in the early '60s, that it was still feasible to drink unto blindness, jump smugglers' boats and, indeed, move from âhome' to âhome' with the frequency of a Mayflower truck.”

“Fast, furious, loaded with incident, and utterly fearless [Thompson] may be the best letter writer since Flaubert.”

“Lurking beneath the aggressive energy and ferocious will that powers these letters is a wistful, doom-haunted melancholy that finds its true release not in rage and excess, but in the act of writing.”

“Peerless in its outrageousnessÂ â¦Â By turns exasperating and entertaining, this is also a devastating portrait of the writer as an incorrigible outsider.”

“A MASSIVE AND ENLIGHTENING WORK,

a savage and highly personal history of the late 1960s that will remind readers that Hunter Thompson is a twisted American treasure.”

“IrresistibleÂ â¦Â The letters and other fragments in this collection are invested with the same rugged, outspoken individualism as his more public writings, which makes them just as difficult to put down.”

“This is a surprising and entertaining book, simply for what it claims to be the electrified musings of a young man, starving and wild, determined to succeed as a writer.”

“These Thompsonesque burlesques are hilariously splenetic, shocking and frequently insightful.”

“A shot in the liver for struggling writers and a searing testimony to an important moment in American journalism. Highly recommended.”

“Vastly entertaining and a crash course in good writingÂ â¦Â an amazingly good read and a reminder that behind the image lies a tremendous talent.”

“Roaring at perceived injusticeÂ â¦Â This is the story that Hunter S. Thompson fans would never get from Doctor Thompson himself if he sat down to write an autobiography: loyalty, insanity, angst, altruism, and even streaks of tenderness.”

“
The Proud Highway
gives Thompson fans a fresh dose of the past. Here is the old Harley hog of a writer revving up, firing on all cylinders and riding away into the sunset.”

“Thompson wrote great, entertaining letters even when he was apologizing for his behavior or haggling with editors over money.”

“MonumentalÂ â¦Â Thompson conveys his sense of purpose with equal measures of fire and clarity, reminding us that, all myths aside, Thompson's literary prowess is real.” A Ballantine Book
Published by The Random House Publishing Group

Published in the United States by Ballantine Books, an imprint of The Random House Publishing Group, a division of Random House, Inc, New York and simultaneously in Canada by Random House of Canada Limited, Toronto

The Nation
“The Nonstudent Left by Hunter S. Thompson (
The Nation,
September 27, 1965) Copyright Â© 1965 by
The Nation
Reprinted by permission of
The Nation
magazine

Ballantine and colophon are registered trademarks of Random House, Inc.