I did manage to spend a somewhat sodden evening with [Billy] Noonan, but I fear the old “zip” is gone, for the evening left me with an uneasy feeling that the “dark and bloody ground” is presently populated with a rather stilted and pitifully false group of lads and lassies. Maybe it's me, but something has certainly changed. I got the impression that I was watching a play which had run too long.

As for my return to normal, I think it was due to a fascinating sort of infatuation over in Tallahassee. Unfortunately, it seems to be altogether too expensive and has terrifying possibilities. I'm afraid that it was one of those all or nothing propositions which women seem so fond of. At present, I'm planning to get over to New Orleans and let Eichelburger get me good and drunk. I think that will cleanse my soul of this “good and simple life” idea.

Right now I'm going out to look for someone to go into Pensacola and suck up a few with me at a smoky grotto called “Trader John's.” So this will wind it up for the moment and I'll sit back and wait for a reply.

I've applied for a leave, beginning on December 27 and extending through the 4th of January. However, I'll make a desperate effort to tack four days onto this and have it start Xmas eve. It will undoubtedly be denied (I have only 2 days coming) but it will do no harm to try.

Lilly was a friend of Thompson's from the Athenaeum Literary Association. This letter was written to him at Princeton University, where he was now a student.

You displayed the epitome of gall, sir, when you went so far as to state that I “generally never write back.” Except in the case of ghastly tragedies, I never fail to write back almost immediately. I average at least 3 or 4 letters every night; some of them personal and some business. Naturally, I get hundreds of requests for autographed pictures, but most of these are answered by my secretary, a very intelligent female orangutan.

One item, I think, deserves extra comment, and that's the one about Curtis
18
becoming “unrecognizably” drunk. Now I've seen drunks and drunksâtall drunks, short drunks, blind drunks, crawling drunks, slithering drunks, mumbling drunks, screeching drunks, crying drunks, sick drunks, dead drunks, speeding drunks, addled drunks, pitiful drunks, and just about any other type of drunk there isâbut never have I seen a man who was unrecognizably drunk! The only explanation I can see for such a wonder, is that he must have shattered the “intoxication barrier” in an almost superhuman display of degeneration, dissipation, vice and drink.

Although I have no doubt that his head must have felt like one huge, infected tumor upon his shoulders when morning finally lifted its painful and ugly head; let him take consolation in the fact that he has established a new “intoxication level”âsomething for which you can all try for over the holidays; a proud and amazing feat indeed!

Ironically enough, even as I beat out an irregular tattoo on this machine, my head is swollen and painful from last night's pleasures. I must strain my eyes to see what I am writing, and even then, I'm not quite sure that I'm saying what I mean to say.

Last night was the occasion of the annual football banquet, to which I was very naturally invited, for it is I who must write the story and get the pictures in the paper. My position has gone to my head recently and I became somewhat drunk very early in the evening last night. By the time the meal was over and the speakers had begun to prattle, I had become almost out of my mind. When it became obvious that I was not going to be recipient of any sort of award, I arose grandly from my seat in the midst of a harangue by the base commander, a man with whom I have had previous difficulty, and staggered out of the banquet room and into the bar. From that point on, things became hazy. I missed all the banquet except the meal and the drinks, and now have no story at all. I don't know whether my photographer got any pictures or not, and all in all, I completely missed the banquet itself. Later, I was thrown out of the club for calling the night manager a crude, numbwit ass. As I was led down the walk by one of
my friends, the manager stood on the porch in a white rage, as I sent a constant stream of insults and epithets over my shoulder in his direction. This morning, as I told him I was going to do, I hurled all the club publicity into Pensacola Bay. This will happen every week until I get a personal apology for his rudeness.

That was only the second time I've been drunk since July, so you probably won't recognize me if I get home over the holidays. I plan to get home right around Christmas Eve, and stay until New Year's Eve. This is tentative, and may change at any time. However, I'll probably see you sometime during that week unless something drastic occurs before then.

Right now, I must wander off to the bed, for my head gives me untold pain and my eyes are orbs of fire in my chalk-white face. Until xmas, get a grip and stay away from brothels. 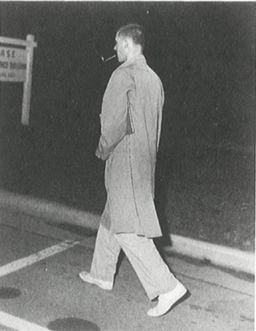 The Spectator prowls the streets in search of an exposÃ©.
(P
HOTO BY
G
EORGE
T
HOMPSON
;
COURTESY OF
HST C
OLLECTION
) 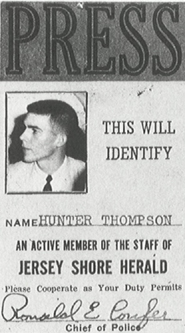 1
. Ann Frick, who was attending the University of Florida.

3
. Henry “Ike” Eichelburger was a former Louisville classmate of Thompson's who was studying biology-zoology at Tulane University.

4
. David Porter Bibb III was a Louisville friend of Thompson's and a colleague at the Athenaeum Literary Association. At this time he was a sophomore at Yale University.

6
. The Castlewood Athletic Club, a neighborhood group for teenagers.

9
. Tom Scaley, a native of Tallahassee, attended electronics school with Thompson at Scott Air Force Base. Assigned to Eglin, he was Thompson's entrÃ©e to the world of Tallahassee debutantes.

11
. The
Broadcaster
was the Scott Air Force Base newspaper.

12
. AFSC stands for Air Force Security Classification. Thompson wanted to have his AFSC changed so he would be deemed a security risk and not sent to a war zone.

13
. Bob Butler was a Louisville “rogue” friend of Thompson's. Together they read aloud the Greek classics while drinking beer and raising Cain.

15
. Joe Bell was a Louisville high school friend and Athenaeum Literary Association colleague of Thompson's who later went to forestry school. Billy Noonan was a Louisville native who was friends with Thompson's brother Davison. He later ran for coroner on the 1970 “Freak Power” ticket when Thompson ran for sheriff in Pitkin County, Colorado.

16
. Thompson also wrote for the NCO Club newsletter, under the pseudonym Cuubley Cohn, a takeoff on Coleridge's “Kubla Khan.”

17
. Reed's name and school have been changed for publication.

18
. Curtis Moore was a Louisville friend of Thompson's and a prominent member of the Athenaeum Literary Association. He graduated from Harvard University.

A thick blanket of grey fog hung over the West Gate early Saturday morning, as a green and white Chevrolet rolled past the little gatehouse for the last time. With a characteristic grin, the driver muttered a silent farewell to this Gulf Coast paradise and pointed the nose of the little car down the highway to Pensacola.

It was Gene “The Montana Ace” Espeland, his discharge papers on the seat beside him, heading back to Westby, Montana. Within a week or so, he'll be back at Northern Montana State College, taking up where he left off four years ago.

One of the most colorful athletes ever to wear an Eglin uniform, Gene was what they would call in France “un type.” Here, we call them “characters,” but they tend to be the same the world over, and without them, life would be intolerably dull.

In Orlando to cover Eglin's basketball game against Pinecastle AFB for the
Command Courier,
Thompson found time to update Judy Stellings, his ex-girlfriend, who was attending the University of Kentucky but wanted to switch to Hollins College.

Although I seem to remember you saying that you would write “immediately” as I wandered out of Cooke's castle after an unusually sober New Year's Eve, I now find myself with a few moments to spare and will attempt to bat out a few lines of greeting.

Actually, what prompted me to write was the sound of Bing Crosby's voice, singing some of the songs which I used to listen to in your living room in the days which now seem almost a part of another lifetime, a past which was so completely different from the present that it seems impossible that it could be anything other than a dream.

Since early afternoon, I've been sitting at the typewriter in the office of the Airmen's Club at Pinecastle AFB, just outside of Orlando. I came down with the team Friday morning and probably won't get back to Eglin until sometime Wednesday. We are scheduled to leave for Montgomery, Alabama tomorrow morning for two more games with Moody AFB. I'll probably have to telegraph all my stories in and send the pictures in by plane because my deadline is Wednesday morning and it doesn't look like I'll make it.