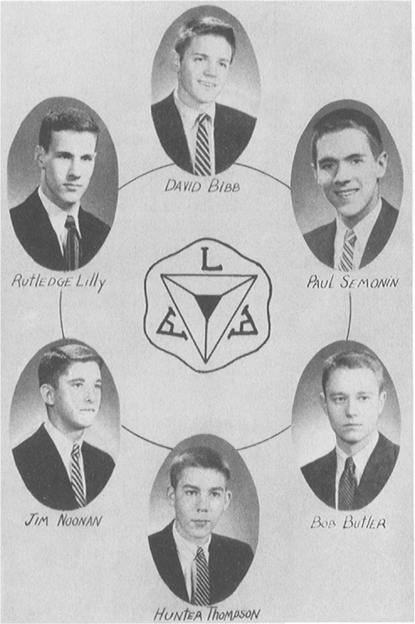 Photos from
The Spectator,
1954.
(C
OURTESY OF
HST C
OLLECTION
) 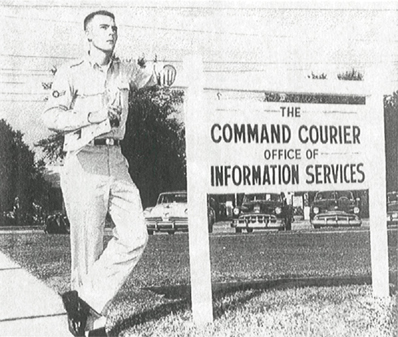 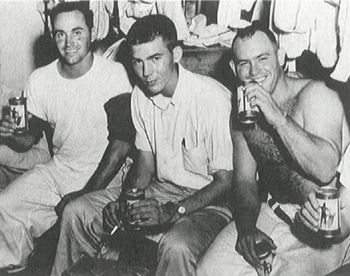 Thompson (shown here with Air Force buddies) became a legend at Eglin for both his journalistic skills and his nonconformist attitude.
(C
OURTESY OF
HST C
OLLECTION
)

The story of Joe Louis is an old one; the story of the star which has out-lived its light; the soaring meteor which failed to explode in mid-air at the height of its climb, but plummeted down to the same earth with the millions who, moments before, had stared wide-eyed at its beauty.

The world likes to look up at its stars. A meteor which falls out of the skies not only is dead when it hits, but digs its own grave by the force of its fall. Just as the crowd stares curiously at a fallen meteor and then wanders off, the crowd is beginning to thin around Joe Louis. He stands painfully bewildered in a world which he never took the trouble to understand. The applause of the worshipping thousands has died into the whispering of the curious few. The end is inevitable.

Tyrrell was a childhood friend of Thompson's, dubbed “Ching” when he joined the HAWKS Athletic Club after returning from China, where his father had been British consul general until the fall of Chiang Kai-shek's regime in 1949. Ching had attended the same three schools as Thompson: I. N. Bloom, Highland Junior High, and Louisville Male High School. They shared a deep interest in American literature forged through the Athenaeum Literary Association. At this time, Ching was an undergraduate at Yale University. Thompson had graduated from Scott Air Force Base's electronics program in June 1956 and was assigned to Eglin Air Proving Ground in Pensacola, Florida.

From out of the most deserted and god-forsaken spot in the Continental United States, winding its lonely way over the sand dune and through the swamp grass; comes the mournful cry of a man in the throes of mortal agony. With the return of the football season, come memories of people, parties and far-off places: the cold and clammy feel of a beer can clutched in my hand, the witless screech of the crowd at a football game, the memory of soft brown eyes and bubbling laughter, the sight of a young and palpitating breast; all these and many more race through my mind as I sit at my desk and pound out this missive which will bridge the gap from me to the mythical world of gay laughter and tinkling glasses. Ah meÂ â¦Â when the winter is overÂ â¦Â I can no longer repress a desperate cry of thirst and need.

With this opening, I offer a capsule of my first feelings of this wretched Saturday afternoon. This is the first weekend I haven't made the trip to Tallahassee and I feel like an opium-eater undergoing the “cure.” Each weekend since late July has been spent in the company of a young and passionate
lass
1
and, as Saturday night approaches, my palms begin to sweat profusely and my imagination runs amuck, causing me to leer at some of these fabulously beautiful WAFs. However, with an iron self-control, born of recent necessity, I will get a steel grip on myself and begin thinking about next week's sports page.

Perhaps I'd better explain my newest and most successful venture. In a resounding and incredible triumph over regulations and first sergeants, I managed to effect a transfer to the Information Services career field. More specifically, I am now Sports Editor of the
Command Courier,
the official voice of Eglin AFB.
2
Now you know, and I know, that I've never written a word for a newspaper of any sort. And you know that it's ridiculous to even speak of any experience on my part, as far as layout or page arrangement goes. In short, we both know that I'm no more qualified for a post like this than I am for the presidency of a theological seminary; but there is one major fact that makes it possible for me to hold this job: the people who hired me didn't bother to check any too closely on my journalistic background. I've managed to keep them in safe ignorance for about a month now, by nodding my head knowingly at any mention of a term which sounds journalistic, and using a few simple ones on occasion, whenever it seems comparatively safe. Just out of mild curiosity, I'd like you to look over the sports page of this edition and send me an opinion of some sort. I'm afraid to ask anyone around here, and I seem to remember that you know something about this type of thing. With the advent of the latest issue (sports), I think I'm pretty well entrenched around here, but I still think that it would be best that I don't make any display of my total lack of tangible knowledge on the subject, lest they become fearful of what might happen when my luck runs out.

Although I think I now have the best deal I could possibly have in the Air Force, acting the part of the experienced, competent journalist day after day has been quite a strain on my nervous system. I now tip the scales at a vastly reduced 168 pounds and I look rather silly when I attempt to wear the pants which fit me last spring. I had to give up cigarettes when my daily consumption topped the 3-pack-a-day mark, and I now smoke about two packs of tobacco per day, via the pipe route. Also, without the slightest exaggeration, I drink approximately 20 cups of coffee every 24 hours and manage to sleep about 5 hours a night. Of course, it goes without saying that I'm jumpy as a cat and am extremely unpleasant and sarcastic most of the time. I've developed an arrogant and forbidding attitude, which keeps
most of the numbwits away from me. Naturally, as I am sports editor of the base paper, most people know who I am, but very few of them care to talk to me; which is fine. I'll save my social intercourse for Tallahassee and live like a hermit during the week.

Life down here is so damnably different than anything I've ever experienced. During the week, I might as well be on a ship at sea. We can only pick up radio broadcasts from the immediate area, and the only contact with the outside world is through the eyes of the Mobile, Birmingham, Jacksonville and Pensacola papers, which I scour avidly each day. I've been drunk only once; in Panama City at an orgy which beat all I've ever seen. Believe it or not, I have yet to enter a bar in the state of Florida. The sum total of my alcoholic consumption could be purchased for under $5.00. Dates are plentiful at Florida State U. in Tallahassee, and I spend most of my time there on weekends. It's about 160 miles from here to Tall., but I've come to consider it no distance at all. By the same token, I'd think nothing at all of thumbing the 250 miles from here to New Orleans to see Ike
3
at Tulane. He wanted me to come over this weekend, but my poverty stricken condition prevented such an undertaking. However, I intend to make the trip as soon as possible. I had a slight misunderstanding with my pretty friend in Tall, last weekend and I saw fit to forgo the unpleasantness of going over there and dragging her out of her sorority house and off to a secluded spot. Now however, the sap is rising and my regret is manifest. Ah, how women can get on one's nerves.

I got quite a kick out of your social plight in the fair city of my birth: as I remember her, Sarah McNeil is about as pleasing to the average eye as a wart-hog with Bright's disease. On the whole though, you seem to be managing quite well. I'd appreciate a few impressions of Old Eli, if you can find enough time to send a letter to me in my desolation.

As I'm writing this with Porter Bibb
4
in mind as well as you, I'll request that you see that he peruses it and writes me a line or so. By the way, am I right in assuming that Richard
5
is up there also? If so, give him my most poetic regards and inform him that the life of a dedicated scholar is indeed thorny and that it would really be best to become a Jewish pawnbroker. Speaking of pawnbrokers, I was forced to pawn my $133 typewriter recently for the meager sum of $13Â â¦Â ah, fortune and fame, where art thou?

I fear that lack of paper and time necessitates my closing, so I'll keep with the mode of the times and say, au revoir my friend, until we meet again.

Usual apologies for not writing sooner, also usual excuses. Anyway, I appreciate your letters and all the clippings. Please continue.

Hurricane Flossie was nothing but a troublesome scare; however, word has it that another one is brewing somewhere in the Gulf: nothing definite yet. In any case, don't worry; these things are nothing but big winds that give everyone a chance to play here for a while. Flossie caused me to have to work all night Tuesday, without a wink of sleep until 3:30 Wednesday afternoon. This job has its drawbacksÂ â¦

I covered the Annual Sports Banquet last night and my first football game today. These people just seem to think nothing of sending me on things which are completely new to me. I didn't even know what I was going to last night; my recollection of the CAC
6
banquets saved me from total confusion. Incidentally, every CAC banquet I've been to has been better planned and more enjoyable than this one. (My typing has deteriorated alarmingly; I'm getting worse each day.) At the last moment, the toast-master found that he didn't have a seat at the head table; and, being a sergeant, had to give way to the Colonels, Majors, etc. who had taken all the seats; and sit down amidst the mobÂ â¦Â unusual, at best.