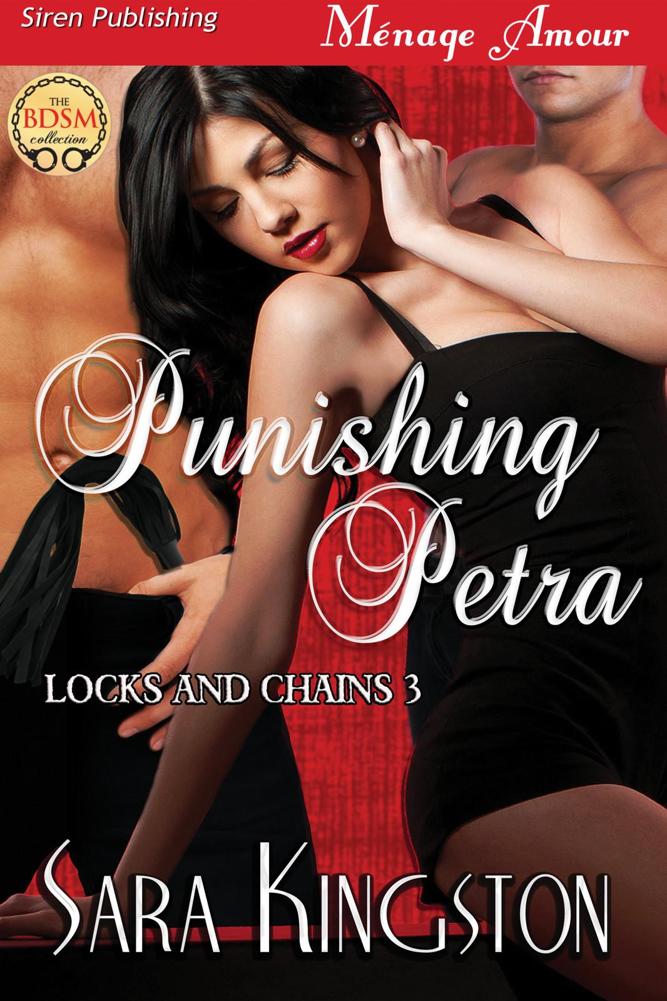 Petra Morales is sick of watching the new subs at the club being taken by the best Masters. What about the experienced submissives? Where is the forever after for them? She’s been overlooked by the good Masters who treat her as a precious flower when what she really wants is strong hands and a strong…

Caleb McKenzie is forever looking for a match to his dark side and forever hoping he doesn’t find one. He helps his best friend Kyle Gordon get back on the bike of the lifestyle he’s left. Kyle is disillusioned and blames himself and the lifestyle for his wife's death, and besides, he has a son to care for.

A club fantasy night delivers for many a night to remember. Petra, Caleb, and Kyle get drawn together in a whirlwind of pleasures. The sex is hotter than they could hope for, but in the cold light of day, how do a petite, experienced submissive, a single dad with so much baggage he could be a 747, and a possessive sadist Dom build a relationship and have their happily ever after?

All cover art and logo copyright © 2012 by Siren Publishing, Inc.

If you have purchased this copy of
Punishing Petra
by Sara Kingston from BookStrand.com or its official distributors, thank you. Also, thank you for not sharing your copy of this book.

This is Sara Kingston’s livelihood. It’s fair and simple. Please respect Ms. Kingston’s right to earn a living from her work.

To my munchkins, my forever babies (yes, I know you are all older now and it is sooo uncool for your mom to call you a baby). You three are my greatest accomplishments. So don’t mess it up for me! Be something great, be something I can brag about. LOL.

May every one of your wishes and dreams come true.

Caleb McKenzie looked around the Locks and Chains club, surveying the offerings available for tonight’s playmate. Bodies swayed to the music. Prey preened and displayed. If only he could find a sub who could handle him. If only he could unleash the hidden beast within. Or should he say, unleash his truly sadistic nature. Just like any other Dom here, he had a reputation. His was for being as hard as stone. He knew they called him the punisher. He knew only the toughest or newest submissive would dare to play with him, and then they only ever played once. None of the new ones lasted right through a scene, and he held the record for the most safe word calls by a sub. Part of him was proud of that record, although another part of him longed to have someone who would match their light to his dark.

Most of the people who came to the club were playing a kinky little game. Very few understood the true emotion, passion, and commitment necessary to fully live the lifestyle. Much like a religion, there were rules and routines to follow. And like in any religion, there were people who pretended to believe. They came once a month, wandered around, and then proclaimed their faith to the world. Then there were the devotees, the ones who turned up every week and played out their fantasies, then went home, leaving behind their kink until next week. And lastly you had the small group of devotees, those who lived the lifestyle 24/7, with all the rules, commitments, and emotions. He was a devotee, and the lifestyle to him was a part of his soul, his being. It was as necessary to him as food to eat or air to breathe.

His devotion to the lifestyle had caused him to question himself. Was there something wrong with him? Was he sick and twisted? Was he no better than the worst of evil beings? He had empathy, he felt what his submissives felt, and he felt compassion for them. He just loved to inflict the delicious pleasure-pain. He loved to hear his subs scream and cry out with release when the pain he inflicted washed over them and then rebuilt them anew. He loved to see their tears. He loved to watch them float in subspace. Most of all he loved to help them fly, which also sent him into Dom space. There were no words to express the feeling when two souls connected on another plane. He’d never found that soul, the one he could hold and possess for eternity.

Maybe he was asking too much? Maybe instead he should be looking for a soul he could just connect with. He felt in his bones he could never accept a joining. He could only accept ownership. He wanted to own another human being. He wanted to own her body, her soul, her mind, and her heart.

Most people assumed he’d had some kind of traumatic childhood or been hardened by society. But in fact, he’d had a typical upper-class upbringing. He had a younger sister, a mother, and a father. His mother was a homemaker and did charity work, and his father was a successful partner in a law firm. He went to a private school and an Ivy League college. He’d been told many times he was good looking, and throughout his younger years women had never been hard to find. Hell, most of the time they’d found him. Environment couldn’t be blamed for who he was. Genetics, maybe? He knew his father held a tight grip on their household. He long ago suspected his parents lived their version of the lifestyle. There were no playrooms and parading like many others liked to do. But there was an air of command and dominance in their home. The devotion his mother showed toward his father was different from what he saw in the homes of his friends. He’d learned as early as seven that he also had a need to dominate. When playing doctors and nurses, he was always the demanding doctor ordering the other kids around. His favorite game as a child was cops and robbers. He relished playing the cop who handcuffed the innocent civilian. Years later, he was the jock who ordered his cheerleader girlfriends around. He even spanked some of his quiet book-nerd girlfriends, whom he discovered were the most adventurous.

The beat of the music from downstairs pulled him back from his reverie. Like the pied piper was calling them, the little mousy subs flowed out onto the dance floor, drawn by the music. And he, the greatest predator of them all, was now looking for his prey. Maybe he could find a sub tonight who would allow him to push that little bit more, just enough so he could feel the pleasure himself.

Not wanting to be disappointed again, he decided he’d find three subs tonight who wanted to play. Maybe, just maybe, one of them might go the distance.

Seeing nothing exceptional from his lofty perch, he walked down the stairs and over to the seating area. He noticed Master Dylan and his family at one of the sofa groupings. They’d first met in college, which was where they’d both discovered their love for the lifestyle and where Dylan had discovered his love of men. Looking down at his feet, he noticed Mia, Dylan’s newly collared little kitty.
If it’s possible for Dylan to finally find his twisted little family unit, then perhaps there’s hope yet for me to also find someone.

Without Malice (The Without Series Book 1) by Jo Robertson
The Lesser Blessed by Richard van Camp
My Legendary Girlfriend by Mike Gayle
Banquet for the Damned by Adam Nevill
Blindsided by Cummings, Priscilla
All About Eva by Deidre Berry
Just the Way You Are (1) by Lexi Ryan
The Sittin' Up by Shelia P. Moses
Lupus Rex by John Carter Cash
Pep Squad by Eileen O'Hely